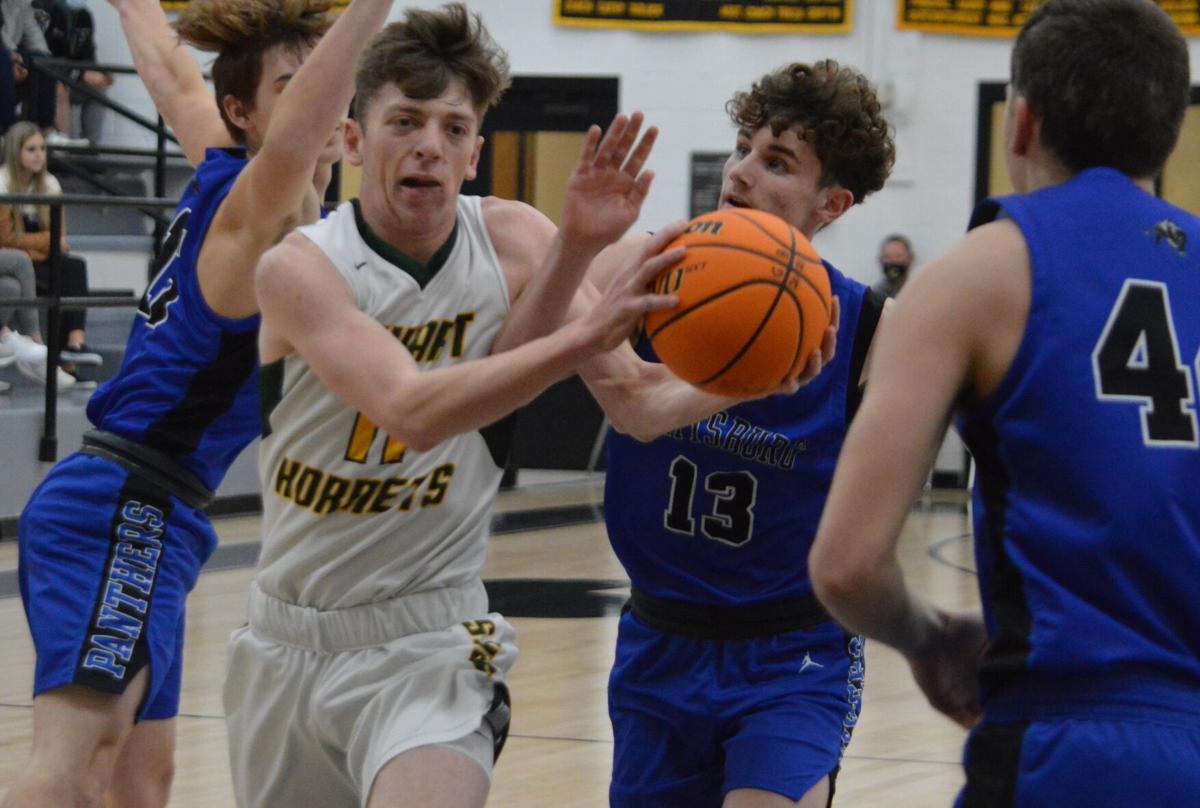 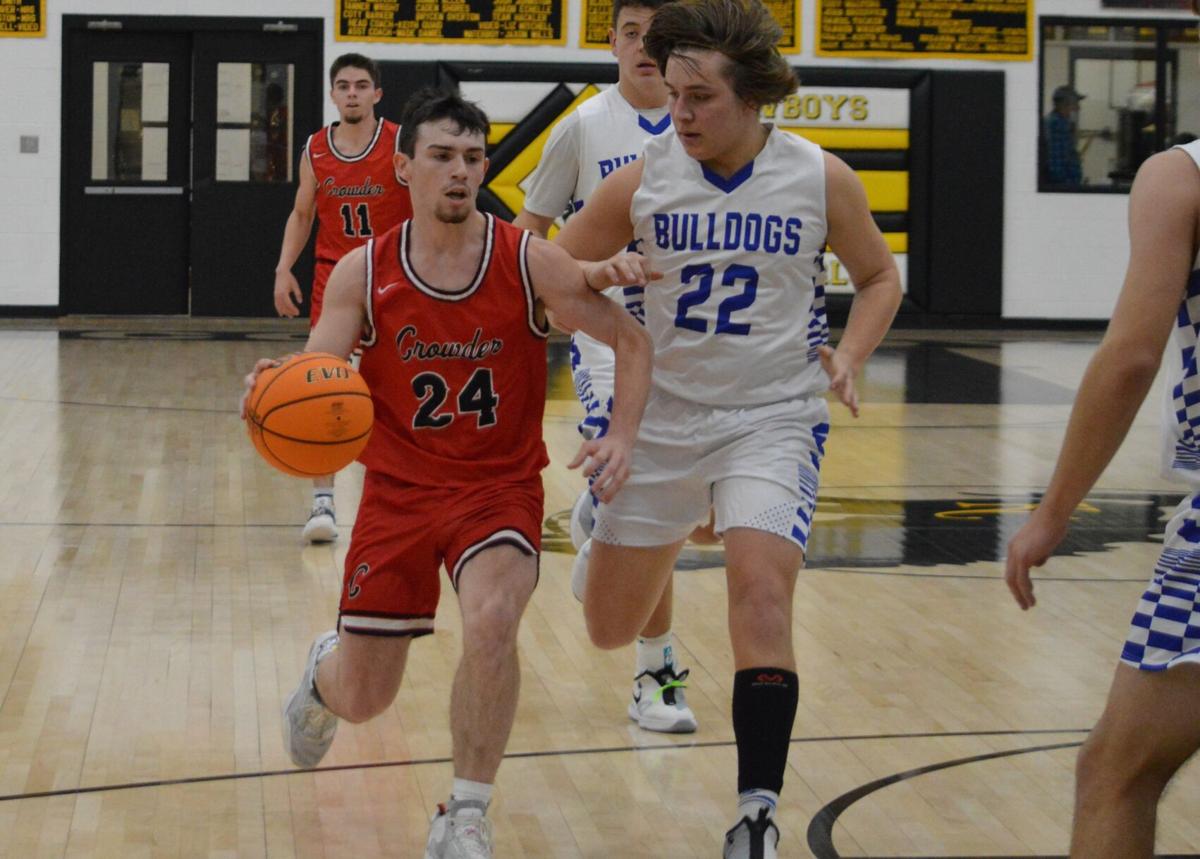 Crowder's Sevryn Mills drives down the court, quickly followed by Savanna's Cayden McElhaney. The two teams went into overtime, where Crowder edged out the Bulldogs to take third place at the Pitt 8 Conference Tournament. 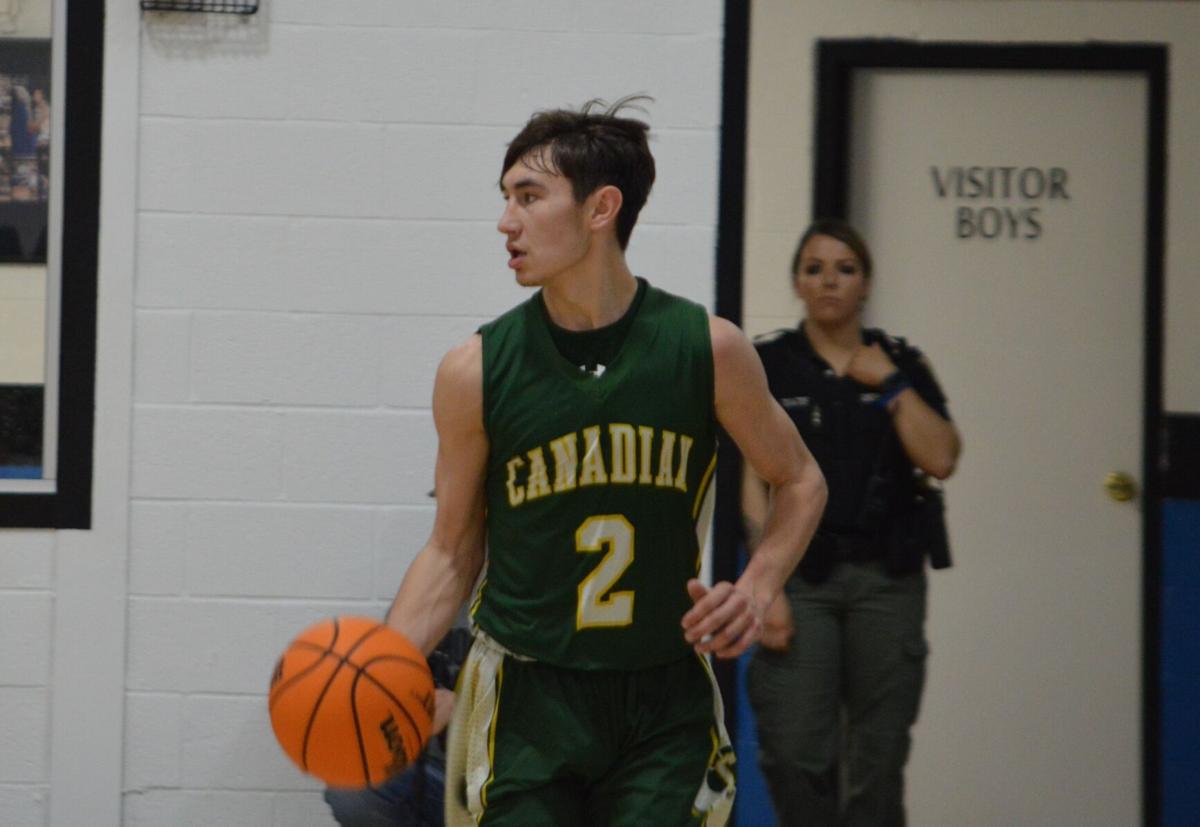 Canadian took home the consolation crown with a win over Indianola in the Pitt 8 Conference Tournament.

Crowder's Sevryn Mills drives down the court, quickly followed by Savanna's Cayden McElhaney. The two teams went into overtime, where Crowder edged out the Bulldogs to take third place at the Pitt 8 Conference Tournament.

Canadian took home the consolation crown with a win over Indianola in the Pitt 8 Conference Tournament.

KIOWA—When the Hornets got hot, the buckets became contagious.

Stuart and Pittsburg clashed in the final game of the Pitt 8 Conference Tournament, with the the Hornets nabbing a 57-33 win and taking home the conference crown.

Coach Michael Langley said he knew it was going to be tough competition heading into the game, but was proud of how his Hornets responded.

"Pittsburg has a really good team, and they're well-coached. And I knew coming in tonight was going to be difficult," Langley said. "My boys stepped up to the plate, and they played really well."

After a short delay to replace a bolt in a broken bracket on the goal, the game began with both teams trading buckets. But Connor Clayton notched a couple big threes to help put the Hornets ahead 13-10 after the first quarter.

But the Panthers weren’t backing down, and stayed toe-to-toe with the Hornets for much of the second quarter as well. However, the Hornets would use a 10-2 run to end out the half and lead 27-16 heading into the locker room.

Clayton got things started early in the second half for Stuart, immediately driving to the bucket for the score. Cole Allen responded with a three from the right side, getting the Panthers offense started as well.

Matthew Rice added a triple of his own, and Pittsburg cut into the deficit to make it a 31-22 game. Clayton would then answer with a fast-break steal-and-score where he was fouled and completed the old-fashioned three-point play to extend the Hornet lead.

He followed that up with a big bucket from the top of the arc, and Jared McIntosh hit a fadeaway shot at the buzzer to put Stuart up 43-28 after three quarters.

In the fourth quarter, McIntosh kept things rolling with a three-point bucket to add some space for the Hornets, but Pittsburg answered by finding Parker Horton under the bucket for the score.

But although the Panthers battled to the final whistle, it wouldn’t be enough as McIntosh hit another triple and the Hornets rolled on for the win.

Langley said the win was a great milestone for his team, and a good way to get them ready for the road ahead.

"They seem to be peaking at the right time," Langley said. "And the scoring is spreading out, which makes it more difficult for other teams to deal with. I was very pleased...I think the defense for us tonight is what made it.

"It was a good game, but now we're focusing on the next one," he added.

Clayton finished with 25 points for the Hornets, followed by McIntosh with 12 points, Drevon Colbert with 10 points, and Kobe Wilson with eight.

Cross finished with 14 points for the Panthers, followed by Horton with eight points, and Allen with seven points.

A game so good, it took extra basketball to decide a winner.

Crowder and Savanna duked it out to decide third place in the Pitt 8 Conference Tournament on Saturday, with the Demons taking home the overtime win 80-74.

The Bulldogs started the game with by jumping out to an early lead. But the Demons answered with a run of their own, and found themselves leading 18-17 after the first quarter.

In the second quarter, neither team showed any signs of backing down or taking a breather. They battled back and forth, trading the lead. But Crowder’s Sevryn Mills caught fire from beyond the arc, putting the Demons ahead 34-32 at the half.

The Bulldogs opened the second half with a quick bucket from Cayden McElhaney, but Jayden Meaux responded with a bucket of his own for the Demons.

The back and forth continued throughout the opening minutes of the third quarter. But a bucket from Mills and free throws from Meaux created some space for Crowder to try to pull away from the Bulldogs.

Heading into the final quarter, Meaux and James Long gathered up back-to-back scoop-and-scores to put the Demons ahead 56-44. But after a quick timeout, McElhaney drove through the lane and put the ball up and in for the Bulldogs.

Next, Fry hit a corner three to send the Bulldog fans into a frenzy and cut the deficit to just three points. Savanna was forced to foul, and Meaux nailed a pair of free throws to add to the Demon lead.

With just 15 seconds remaining, McElhaney made a shot to make it a two-point game. The Bulldogs immediatiey fouled, and Avery Williams made one foul shot to put the Demons up three. That’s when Fry was passed the ball and nailed a cold-blooded triple to send the game into overtime.

In extra basketball minutes, the two teams traded the lead for much of the period. Tied at 71-71, Long nailed a triple from the top of the key to put the Demons ahead.

Mills added foul shots to create space, but Chants Leflore responded with an arcing trey to bring the game back within a possession. But a steal and score by Meaux sealed the game away for the Demons.

Mills finished the night with 30 points for the Demons, followed by Meaux with 23 points, Williams with 11 points, and Long with nine points.

Soles finished with 16 points for the Bulldogs, followed by Fry with 15 points, McElhaney with 14 points, and Leflore with 12 points.

Here are complete scores from the 2021 Pitt 8 Tournament: