Future plans for McAlester senior cheerleader Taylor Burmeier, seen here before an Oct. 17 home game against Durant, include studying pre-law at either the University of Oklahoma or Oklahoma State University, going to law school and becoming a sports agent. 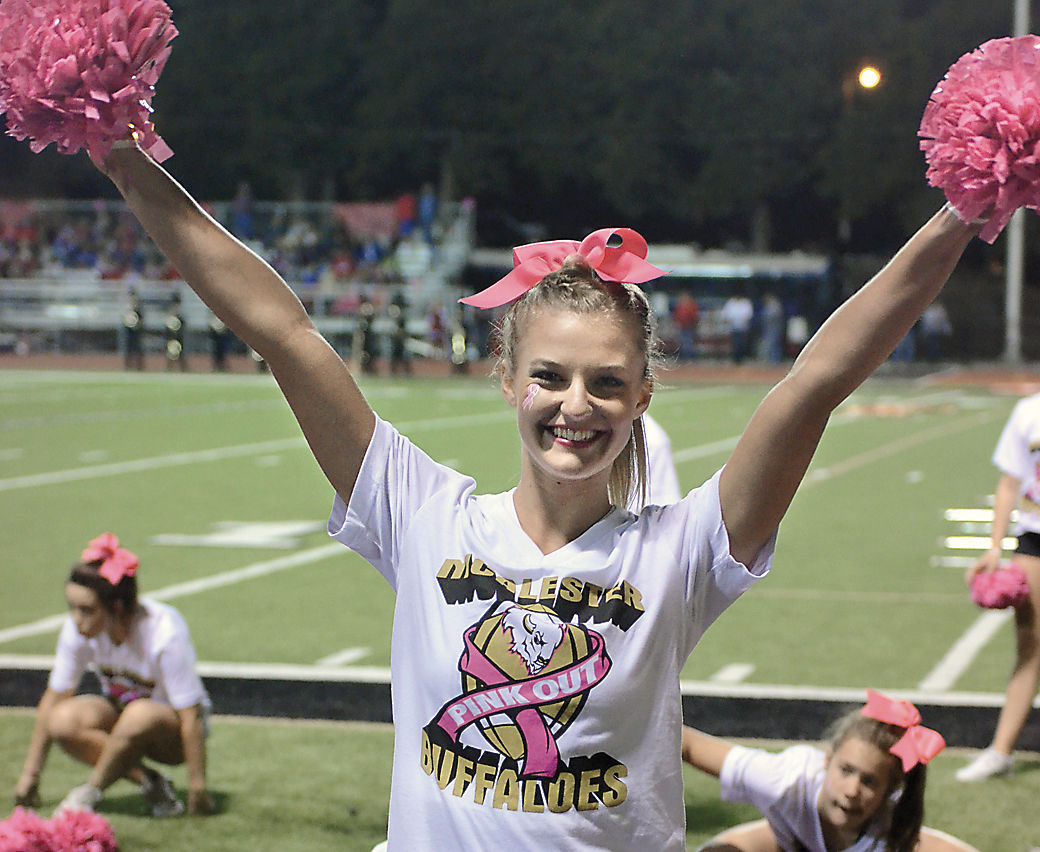 Future plans for McAlester senior cheerleader Taylor Burmeier, seen here before an Oct. 17 home game against Durant, include studying pre-law at either the University of Oklahoma or Oklahoma State University, going to law school and becoming a sports agent.

McAlester senior Taylor Burmeier grew up dancing. Dance took her all the way to McAlester’s varsity pom squad, where she competed her first three years at McAlester High School.

Wanting to try something new, Burmeier switched to cheer for her senior year.

“I like change,” Burmeier said on Oct. 17. “I don’t like to do the same thing consistently. I watched cheer — I have a bunch of friends on cheer — so I thought I’d just try something different.”

Burmeier said she started dancing when she was 4. She took classes at Angie’s Dance Plus, a studio that’s turned out multiple McAlester pom dancers, and got her first taste of performance in a tap dance recital that year.

“That was the first recital I remember being in,” Burmeier said. “I know that I was nervous, but I was also excited, because I like performing.”

“It’s the most emotional, so you get to express everything,” she said.

Burmeier first tried out for pom as an eighth-grade student in the spring of 2009. She made the fall 2009 squad, then tried out and made the 2010 and 2011 squads as well, joining teams that would go on to state championships and decent showings at Nationals.

“I was very nervous,” Burmeier said of her first tryout for pom.

“It was my first year trying out, and I was also number two, so I was in the first group. So that made me even more nervous, not knowing what to expect. ... After you do the first skill, it kind of all goes away, and you feel like you have everything under control.”

Tumbling proved to be much more challenging.

“I had tumbled up until I was about 8 years old, and I was not great at it,” Burmeier said. “Trying to be as old as I am and try to make myself flip backwards was hard.”

With dancing’s emphasis on strong legs, Burmeier quickly became a strong base for the cheer squad. On being base, Burmeier said, “The bases are the ones that are in control of the stunt, and they’re the ones that get depended on a lot.”

With Burmeier’s help, the Lady Buffs finished 13th at State in September. Burmeier was then named to the Oklahoma Cheerleading Coaches Association All-Region 6 team on Oct. 16.

“I felt accomplished,” Burmeier said of her All-Region honor. “I started this time last year working to become a cheerleader, and I haven’t stopped. I feel like that hard work pays off.”

Burmeier credited her success to cheer coach Ashlee Shumway, who constantly pushes the squad to be in top physical and mental shape.

“I’ve grown up with five brothers, so I’m around sports all the time,” Burmeier said. “I feel like I understand a lot more than girls do, and I love being around it. I love watching it — I would rather watch a football game on TV than a reality show.”

To become a sports agent, Burmeier said she plans to study pre-law at either the University of Oklahoma or Oklahoma State University. She said she hasn’t decided which school she’d prefer, because although she’s a Sooners fan, Stillwater reminds her more of McAlester, where she’s loved growing up and being a part of the sports culture.

“Our town has a really good support system,” Burmeier said. “Just being a Buffalo in general, it’s special to know that we have the backing of our community, and just the support that we do have. We fill up these stands every Friday, and to sit on the sidelines and see that is rewarding.”

After college will come law school, then a possible departure from Oklahoma. Most sports agents operate out of bigger cities, and Burmeier said she’s prepared to head elsewhere, having gone to Los Angeles as recently as Christmas break.

“I’ve always liked L.A.,” Burmeier said. “It’s big, very big, especially compared to growing up here, but I like all of the opportunity that comes with it.”

The senior secretary for the MHS student council, Burmeier said she’s enjoyed how hard she’s been pushed in both pom and cheer.

With a work ethic like Burmeier’s, the sports agency world had better be ready.

Dalton Lefate Adkins, died at home in Houston, Texas on March 23. He was born at home in Jackfork, Oklahoma on December 10, 1947. He was the 8th of 11 children. He retired after 32 years with Phillips Conoco as a Geological Engineer. Survivors include a son, Matthew Dalton Adkins; three sist…