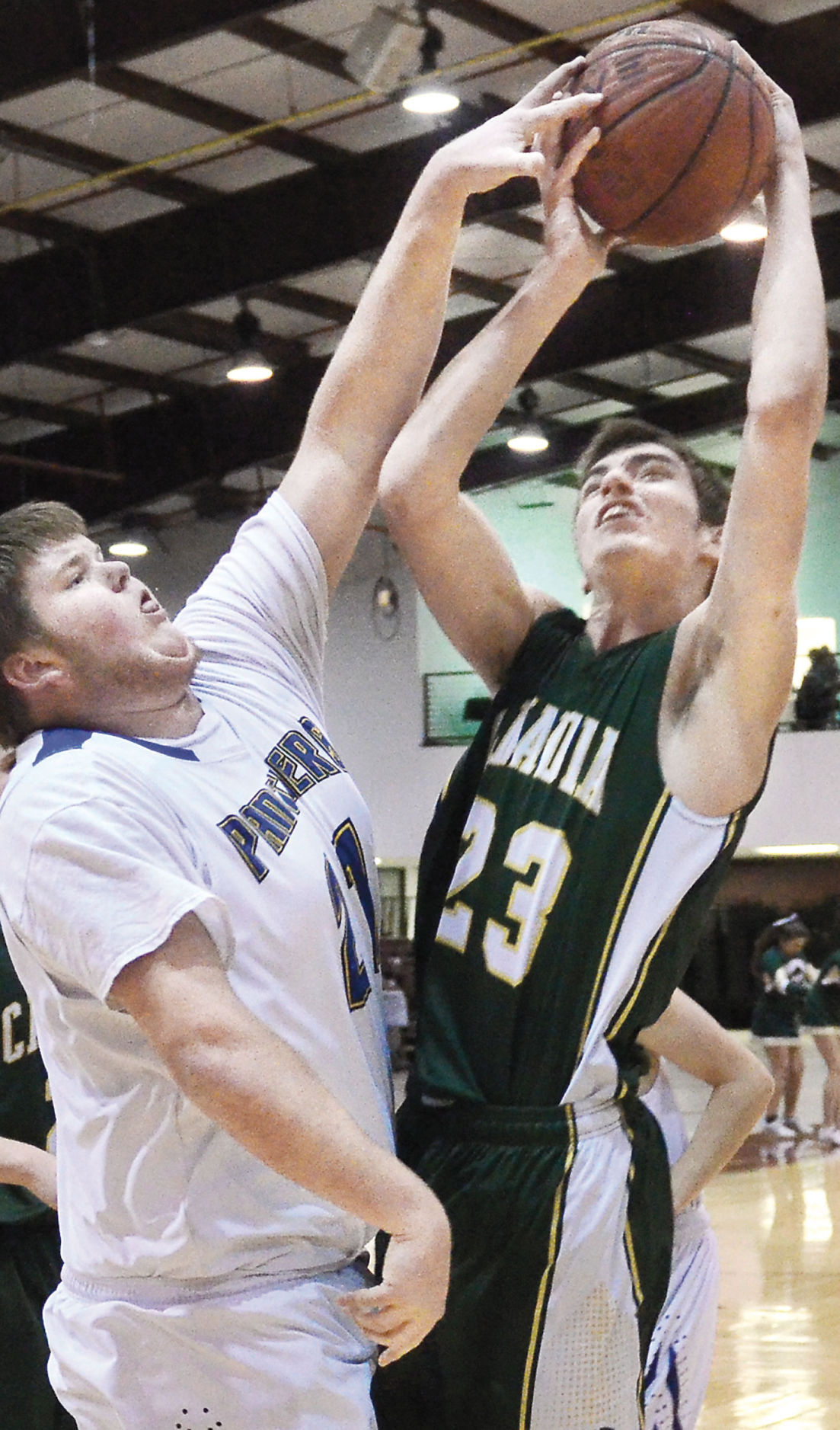 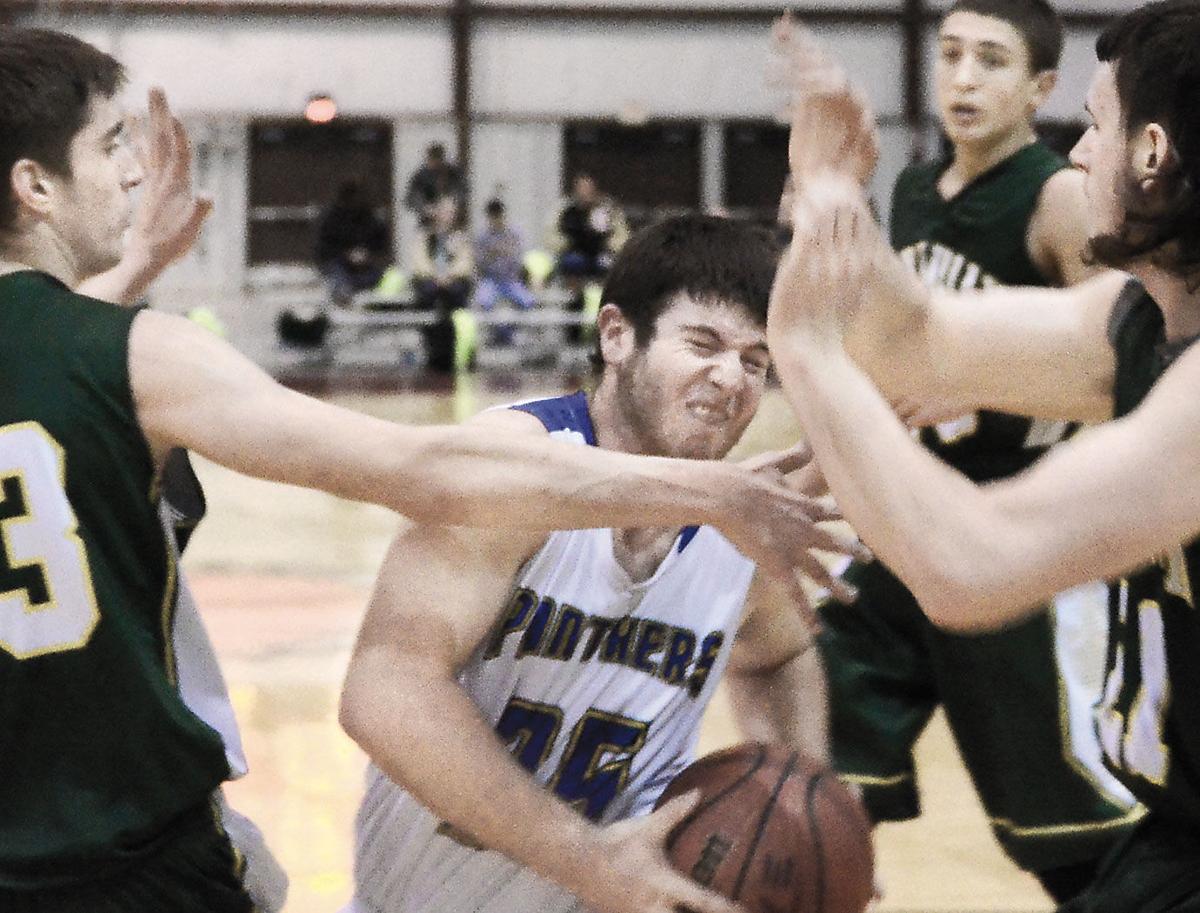 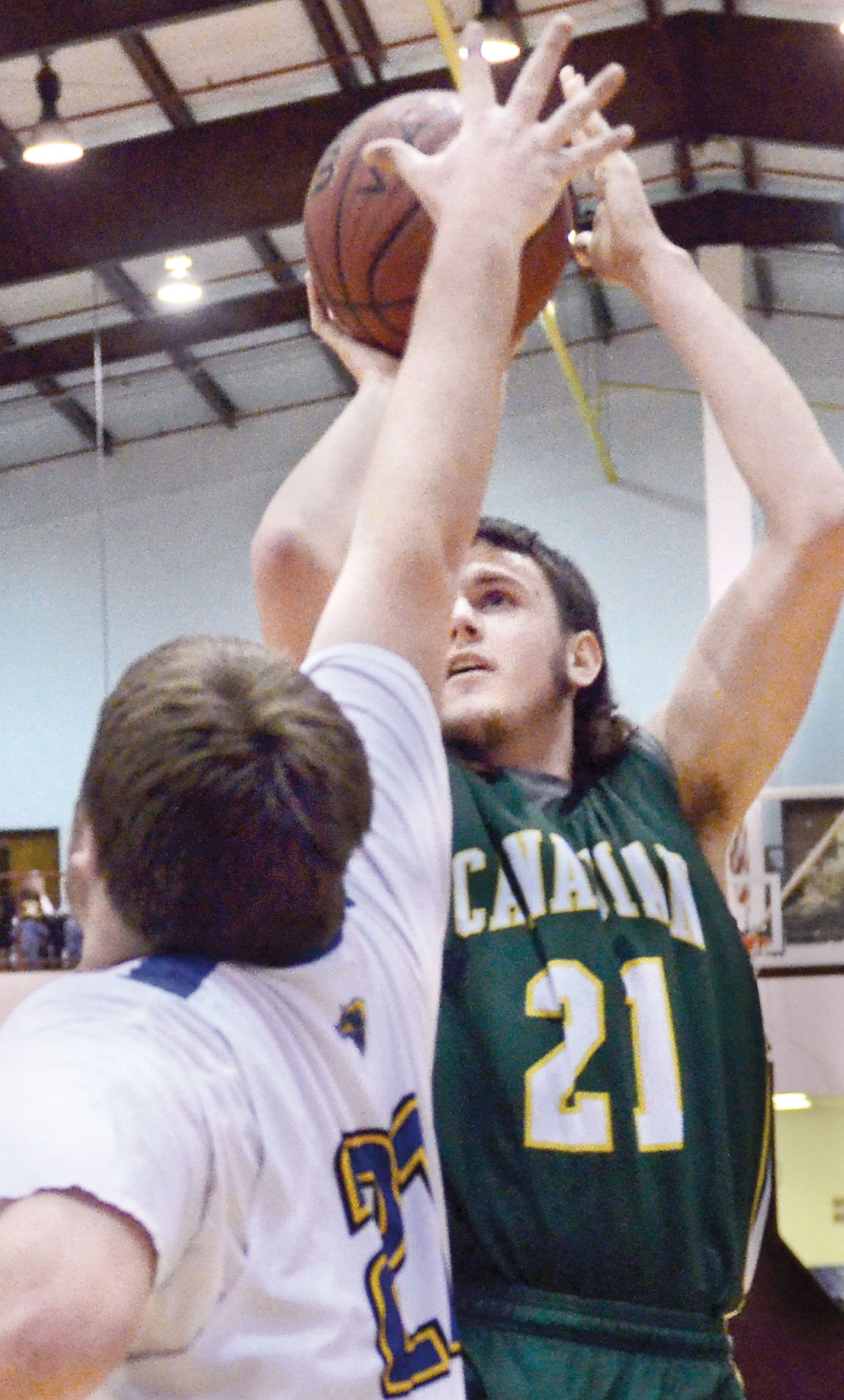 Canadian forward Colton Harris (21) shoots with a Pittsburg defender in his face during Tuesday’s Pitt 8 Tournament first-round game at the Southeast Expo Center in McAlester. 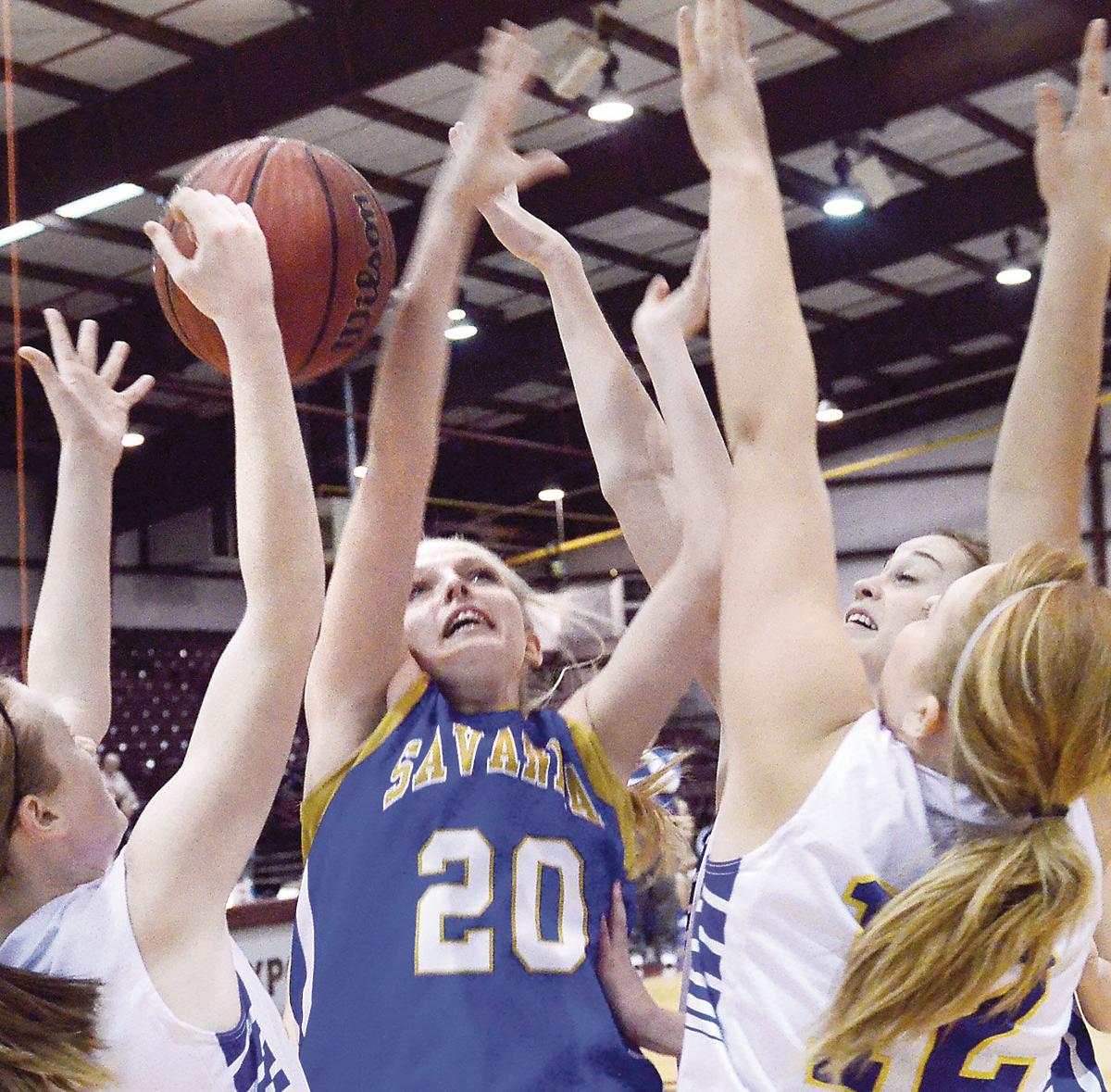 Savanna’s Abby Mabray (20) has a shot blocked while going up in between three Haileyville defenders during Tuesday’s Pitt 8 Tournament first-round game at the Southeast Expo Center in McAlester. 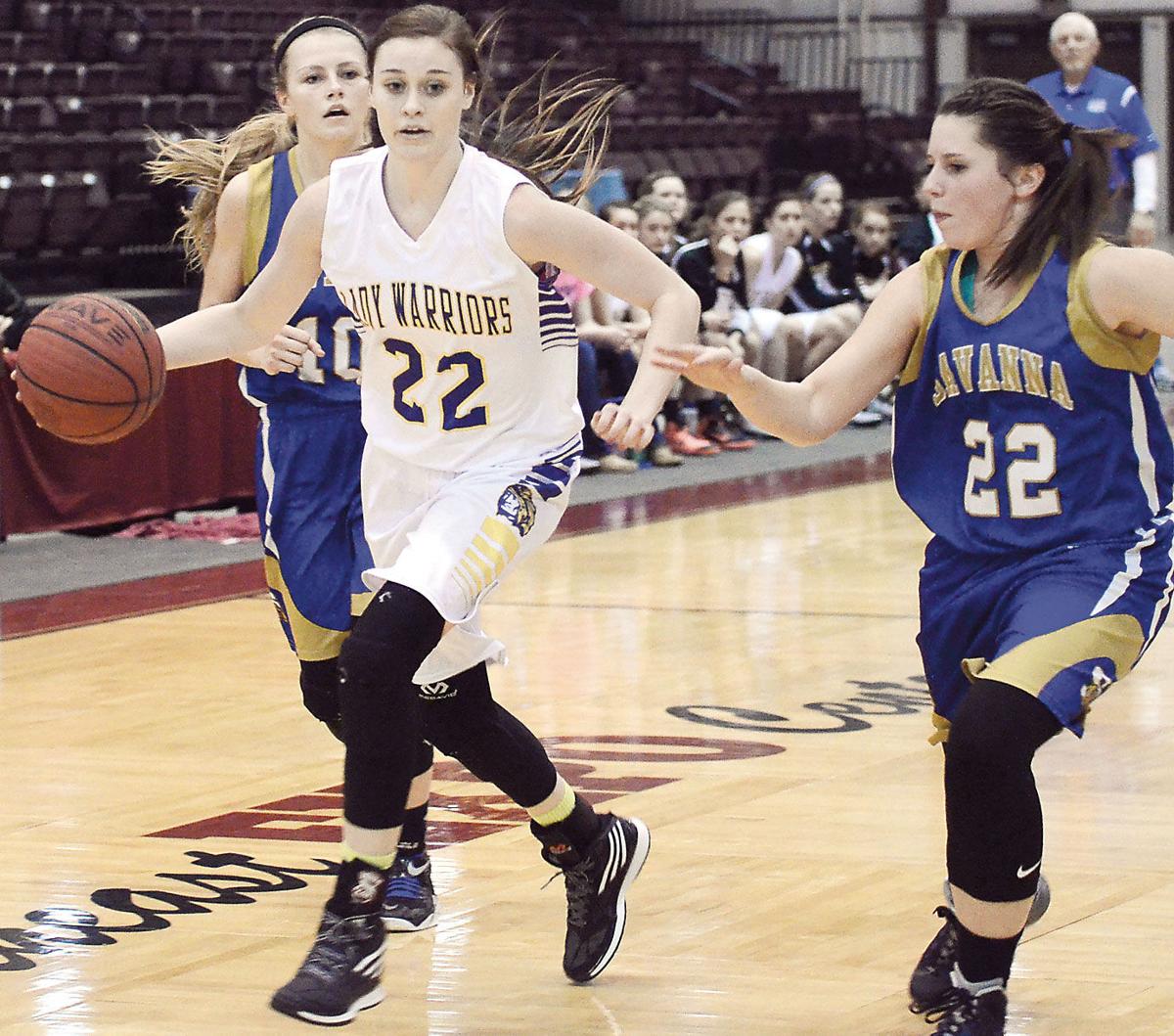 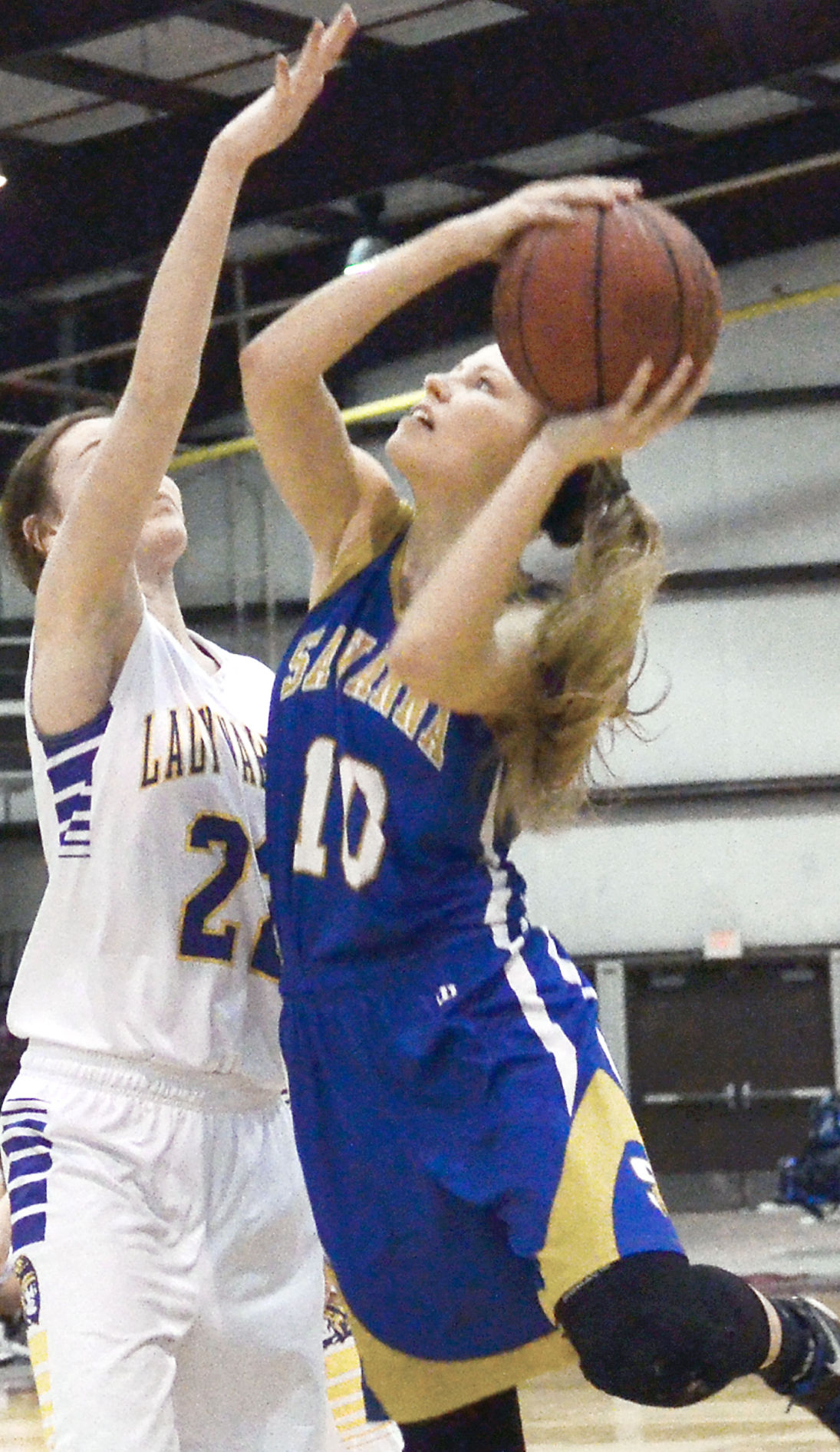 Savanna's Justice Smith, tries to shoot over a Haileyville defender during Tuesday's Pitt 8 Tournament first-round game at the Southeast Expo Center in McAlester.

Canadian forward Colton Harris (21) shoots with a Pittsburg defender in his face during Tuesday’s Pitt 8 Tournament first-round game at the Southeast Expo Center in McAlester.

Savanna’s Abby Mabray (20) has a shot blocked while going up in between three Haileyville defenders during Tuesday’s Pitt 8 Tournament first-round game at the Southeast Expo Center in McAlester.

Savanna's Justice Smith, tries to shoot over a Haileyville defender during Tuesday's Pitt 8 Tournament first-round game at the Southeast Expo Center in McAlester.

The higher-seeded Savanna Lady Bulldogs, Canadian Cougars, Stuart Lady Hornets and Kiowa Cowboys all advanced to the Pitt 8 Tournament semifinals with first-round wins by at least 22 points Tuesday at the Southeast Expo Center in McAlester.

The Lady Warriors managed to keep the game close through the early minutes of the second quarter. Sam Horne knocked down a 3-pointer for Haileyville to cut Savanna’s lead to 14-12, then two possessions later Ashton Sockey grabbed a loose ball and laid it in to cut the score to 15-14.

But that’d be it for Haileyville’s baskets until the final seconds of the first half, with the Lady Bulldogs responding to Sockey’s basket with a 12-1 run to give themselves some much-needed breathing room. Peyton Little took a pass from Abby Mabray and knocked down a 3-pointer, then Mabray got it to Justice Smith in the post for a layup and a 20-14 lead.

Smith came up with a steal on Haileyville’s ensuing possession, and on the opposite end Little knocked down another 3-pointer. Little then turned a steal into a layup and a 25-14 lead before Haileyville’s Danielle Morgan hit a free throw to end the run.

Little led the game with 15 points.

“They left the lane pretty open, so you can drive.”

Smith’s basket off an offensive rebound pushed the lead to 27-15, but Sam Horne hit a free throw for Haileyville. Morgan later took a defensive rebound coast to coast for a layup to close out the first half down just 27-18, but Brittany Drake knocked down a 3-pointer for Savanna early in the third quarter.

Mabray chipped in a 3-pointer and two free throws to push Savanna’s lead to 35-20. The Lady Warriors trailed by double digits the rest of the game.

“We weren’t making them in the first quarter, and then we finally settled down and had some good moves to the basket,” Savanna coach Dianne Inman said. “Made some 3-pointers, which will always help you.”

Savanna routinely used a trap defense against Haileyville in the first half, double-teaming ball-handlers to produce steals and fastbreak opportunities. But a combination of crisp passing from Haileyville and foul trouble for Savanna forced the Lady Bulldogs into a more traditional 2-3 zone in the second half.

That new defense made it much harder for Morgan to penetrate Savanna’s defense, a key component of Haileyville’s offensive strategy in the first half. The Lady Warriors got more open looks along the perimeter in the second half, but they struggled to convert those looks into points.

“We missed a lot shots that we usually make,” Haileyville coach Ray Love said. “When we get open 3s like that, our guards can usually knock them down.”

Canadian guard Chase Shearwood finished as the game’s leading scorer with 21 points. But Canadian’s half-court trap defense paved the way for numerous fastbreak opportunities for Shearwood, and for that Tanner Freeman deserves as much if not more credit for the Cougars’ first-round win against Pittsburg.

Freeman’s steal in the third quarter led to a transition basket for Shearwood. Freeman then came up with another steal and got it to Taylor Koedyker for another transition basket that pushed the lead to 42-19.

“We had a lot of turnovers, especially in the second half, that spread out the lead,” Shearwood said. “When we get that ball-pressure when the ball-handlers bring it up, when we (run) that 1-2-2 (defense), cut the middle off, it’s hard for them.”

The Panthers ended the Cougars’ 17-0 run with a layup by Tyler Sullivan, and Pittsburg outscored Canadian down the stretch. But thanks to Freeman’s defense, a game that at halftime looked as if Canadian’s starters might have to play a full four quarters became a blowout just five minutes later.

“At the time, it was a 16-point game, and it went to 35 pretty quick,” Pittsburg coach Vaughn Blankenship said.

“We’re a young ballclub, and we have to do everything correctly. We talked about the half-court trap coming in, and then we come out and turn the ball over five, six times in a row.”

Canadian led the entire game against Pittsburg, taking the lead for good on Freeman’s 3-pointer on the first possession of the game. Sullivan’s 3-pointer later cut the deficit to 4-3, and Kyler Burchfield later cut it to 6-5.

Pittsburg trailed just 16-9 after the first quarter, but the Cougars opened the second with 8 unanswered points. Ty Weiher scored in the low post, Koedyker scored off a full-court pass from Weiher, then Freeman came up with a steal and got it to Shearwood for a fastbreak layup.

Weiher scored 19 and gave the Cougars a huge presence in the low post. Freeman hit a 3-pointer as the first half expired and finished with 8 points.

“His effort level is so much better than it used to be,” Canadian coach Daniel Lokey said of Freeman.

“It’s contagious when someone plays with that much effort. He did a tremendous job.”

Nothing the Canadian Lady Cougars tried on offense seemed to work against Stuart’s trap defense. They couldn’t consistently feed forwards like Stephanie McKinney and Michelle Greco, nor could they get open looks or knock down shots along the perimeter.

The Lady Hornets couldn’t capitalize on their defense in the first half, but the trap started producing results halfway through the third quarter. Emilee Beck came up with a steal and got it to Chasity Garvin for a fastbreak layup that pushed Stuart’s lead to 31-14.

Beck came up with another steal on Canadian’s next possession, and again Garvin finished the play with a layup in transition. Stuart outscored Canadian 17-3 in the third quarter, and back-to-back steals by Krystin Wilson led to back-to-back baskets by Garvin early in the fourth.

“We’re always a second-half team,” Stuart coach Melinda Dobson said. “The first half, kind of rocky, but I knew we’d come on in the second half.

Skylar Stopp, a freshman who replaced starter McKay Barton after Barton suffered a foot injury in the first half, came up with a steal of her own and laid it in for a 46-15 lead early in the fourth quarter. Stuart opened the fourth with a 15-0 run, getting a 3-pointer from Beck, a steal-to-layup sequence from Garvin and two free throws from Beck to push the lead to 53-15.

The Crowder Demons couldn’t find a way to shut down Kiowa center Brice Smith. The Cowboys fed Smith over and over in the low post, and Smith torched Crowder’s interior defense for 22 points.

“Our offense wasn’t really great, and it seemed to struggle at times to get into what we needed to do,” Kiowa coach Keith Quaid said. “But when we finally got the ball inside consistently, we started scoring a little bit more often.”

Smith hit both free throws on the play to put Kiowa up 28-14. Weeks never fouled out of the game, but he couldn’t play the second half with his normal physicality and strength, and that opened up even more scoring opportunities for Smith.

Smith later came up with a steal and found Cody Walters in transition for a basket that put Kiowa up 39-24 late in the third quarter. Smith added three baskets and 7 points in the fourth quarter, consistently keeping the Demons from ever really mounting a comeback.

“It just felt like we didn’t give them any second-chance opportunities,” Smith said. Of matching up with Weeks, Smith said, “he likes to jump, so mainly just get him into the air and then go into him.”

Crowder kept the game tight at times during the first half, with Weeks’ free throws tying the game 2-2. Jakob Echelle, who started for the first time Tuesday, put Kiowa up 4-2 with a basket off a steal by Smith, but Crenshaw turned a steal into a game-tying layup.

Kiowa went up for good when Echelle recovered from a blocked shot, grabbed the loose ball and laid it in. Walters then extended the lead to 9-4 with a 3-pointer.

“Not enough good possessions, too many turnovers in between, and a lot of misses,” Crowder coach Wes Wood said. “We got some shots we wanted, (but) just didn’t make them. A lot of times basketball comes down to putting the ball in the hole.”

Walters scored 13 for Kiowa, and Tristian McMath scored 8. Crenshaw and Motley both scored 11 for Crowder, and Weeks scored 10.

Betty Drake, 65, of Savanna, died Wednesday, Jan. 26. Viewing and family visitation will be Sunday from 2:00 to 4:00 p.m. at Brumley-Mills Funeral Home. Funeral services will be Monday, Jan. 31, at 10:00 a.m. at the Kiowa Baptist Church. Burial will follow at Savanna Cemetery.

Nathan Craig Thompson, 41, of Sapulpa, OK passed away at the St. Francis Hospital in Tulsa, OK. Services will be on Tuesday, February 1, 2022 at 2 pm at the Waldrop Funeral Home Chapel with Cremation to follow. Officiating will be Rev. Larry Mays. Services are under the direction of the Wald…

Eleanor Joy Miller, 79, of Wilburton, OK passed away at the McAlester Regional Hospital in McAlester, Oklahoma. Services are set for a later date at this time. Services are under the direction of the Waldrop Funeral Home of Wilburton.