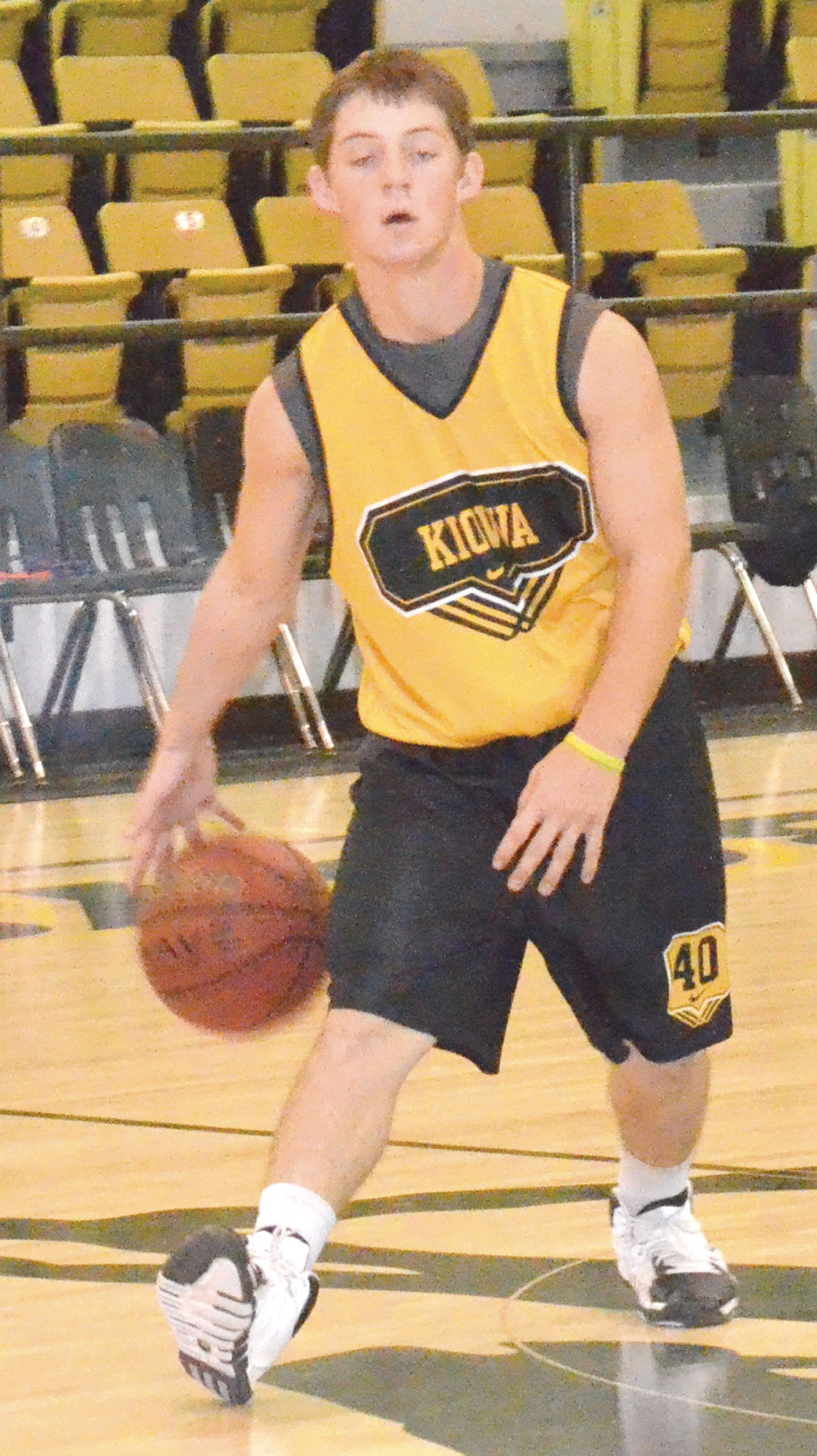 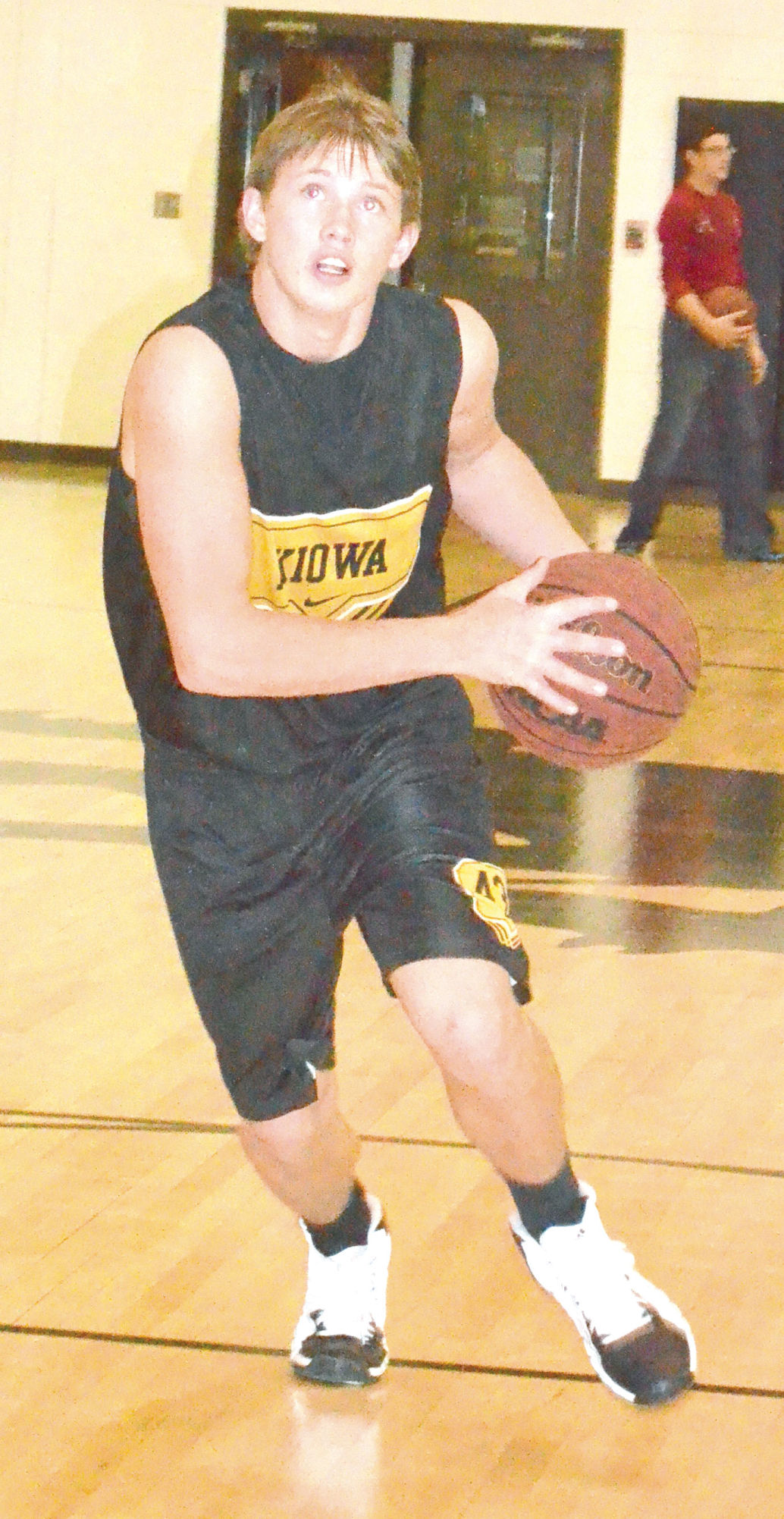 Kiowa’s basketball season kicks off Tuesday at home against Stuart. The Cowgirls play the Lady Hornets at 6:30 p.m., followed by the Cowboys and Hornets at 8.

The Cowgirls have made the state tournament the last two seasons. The 2011-12 team lost in the quarter-finals, the 2012-13 team in the semifinals.

Three of last year’s starting five return for the Cowgirls this season. That includes Rylee Smith, a center able to body up with the usually tallest girl on the other team, grab rebounds and cut off layup attempts.

“We just want her to step up another notch, go to that next level,” Daniel said of Smith. “Just get consistent on scoring and the boards.”

While Smith provides experience in the Cowgirls’ interior, questions remain as to who will be the other forward. Sophomore Tori Gillispie and freshman Lily Daniel, Coach Daniel’s daughter, are two possibilities at the position.

Madi Slawson should take over as the team’s three-guard this season. Slawson gives the Cowgirls another three-point threat to compliment veteran guards Addy Clift and Miranda Stiles.

“She’s really made a tremendous improvement since last year and become a leader on the floor that’s playing relaxed and shooting the ball well,” Coach Daniel said of Slawson.

And then there’s Clift and Stiles. Kiowa’s dynamic duo must be talked about together, because both of them do so many things equally well.

Both can bring the ball up the court. Both can pass. Both can shoot anywhere from beneath the basket to well behind the three-point line.

“She’s shooting the ball well — sometimes not enough — and she does her thing,” Coach Daniel said of Stiles. “She’s a great passer, a great floor general.

“Addy’s a year older, a year smarter and a year stronger. She really has upped her game, believe it or not, as far scrimmages go. She’s very focused and has put on some muscle.”

Both Stiles and Clift can also defend multiple players in the swinging zone defense Kiowa uses with its guards. And perhaps most importantly, both are capable of taking over a game, should a team choose to focus on one.

“They’re just really relaxed right now, which I’m glad,” Coach Daniel said. “They’re playing not with complacency or anything — just taking it day by day and enjoying it.”

Other potential contributors this season include guards Bless Roberts, Emily Knight and Tara Mabray. Coach Daniel said Mabray is still recovering from a broken ankle dating back to the spring slow pitch softball season, but she should return before the season ends.

While a trip to State may be “business as usual” for the Cowgirls, it’d be a new experience for the Cowboys. The 2012-13 Cowboys lost in the consolation finals at Regionals, but Kiowa still won 18 games last year, an improvement of five over the 2011-12 season.

“We think we’re plenty capable of getting to the state tournament. I think anything less would be a disappointment to my kids.”

For the Cowboys, that athleticism includes its bigger players, who’ll try to play an “inside-out” offense. Expect to see a lot of Johnny Allen at power forward, Brice Smith at center and Brycen Smith at both positions.

“They’ve really worked hard on their inside game,” Quaid said. “You can tell it’s important to them. The kids know that’s where we’re going to be the most effective in our half-court sets.”

On Allen, Quaid said, “He’s worked hard to make himself the player he is right now. You can see the desire in his face.”

Quaid said the Cowboys will try to balance their offense between their forwards and guards. Those guards include Shay Calvert and Clay Doyle, who should be the Cowboys’ shooting guard and point guard, respectively.

“That opens up Shay a little more in his outside shooting,” Quaid said. “That’s not a knock against his point guard abilities, he’s a fine point guard. But I think we can be more effective, especially in transition, with him leading the fast-break.

“I have five kids that will start this year, and all five of them have been starters for at least two years. When you have that much experience, oh my goodness.”

The Cowboys’ exact starting five hasn’t been decided yet, with seven players all competing for spots. The seven, Quaid said, include the five players mentioned above, plus small forwards Tristan McMath and Caden Shores.

“Very athletic, can get out and run, and his defense is getting better,” Quaid said of McMath.

“The way I’ve seen him rebound, he’s more apt to get in there and mix it up this year.”

Whoever ends up a starter, he’ll have to be able to play man-to-man defense. The Cowboys relied more on zone last season, Quaid said, but this year they’ll try to force more turnovers, apply more full-court pressure and go on more fast-breaks.

“We’re working on it every day,” Quaid said. “We still have a long way to go, but we’re going to aspire to be a man-to-man team.”

After Tuesday’s game against Stuart, Kiowa next plays at Crowder on Nov. 8. Kiowa will play two more games on the road, then return home Nov. 15 to face Red Oak.

Linda Sue (Conner) Barlow, 76, of Krebs, died Saturday, April 10, at her home in Krebs. Viewing will be Wednesday until 5:00 p.m. and Thursday until 8:00 p.m. Funeral services will be Friday, April 16, at the Kiamichi Cowboy Church at 10:00 a.m. with pastor Mitch Arteberry officiating. Buria…