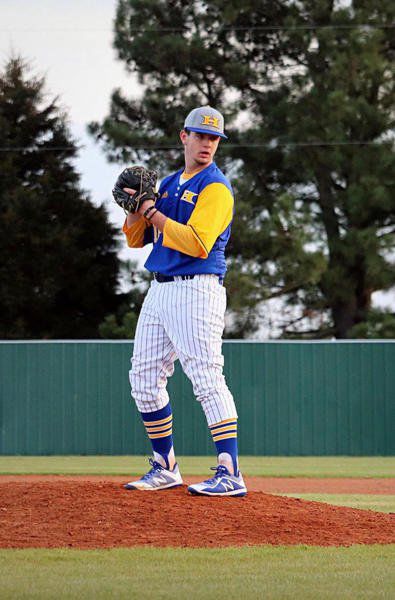 Photo providedCarson Hart makes his only start this season for Calvin/Holdenville before the season was cancelled due to the coronavirus pandemic. 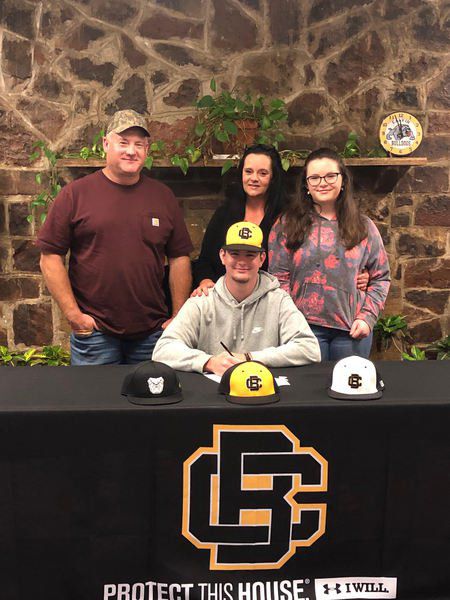 Photo providedCarson Hart, seated, poses with his father Chad, mother Darcey, and sister Terra as he signed to play baseball for USAO on Thursday.

Photo providedCarson Hart makes his only start this season for Calvin/Holdenville before the season was cancelled due to the coronavirus pandemic.

Photo providedCarson Hart, seated, poses with his father Chad, mother Darcey, and sister Terra as he signed to play baseball for USAO on Thursday.

Carson Hart doesn’t shy away from the path he’s taken to reach where he is today.

The Calvin senior signed to play college baseball with the University of Science and Arts of Oklahoma in Chickasha during a signing ceremony on Thursday.

When asked about how he got his start in baseball, Hart remembered back to his early years of life.

"I started playing baseball at 2 or 3,” Hart said. "It’s funny to reminisce on the memories on that.”

Hart said that his parents tell about a young Hart hitting the ball and promptly heading for third base instead of first.

Ever since, Hart said his love for the game continued to grow throughout the years. The young pitcher would throw bullpen sessions into an old twin mattress as he transitioned into high school.

But the last four years have brought challenges. Coaching changes and a shoulder injury while playing Legion ball with the Ada Braves forced Hart to make a choice.

And he chose to fight. After having surgery last July, Hart began to battle back.

"That was really hard for me to not to play,” he said. “ I had a lot of time to think and get my mental approach in order.”

Low team participation led to a co-op team with Holdenville this season, and a derailed initial plan to visit USAO led to a life-changing meeting.

“God had a plan for how all of this was supposed to work out,” Hart said.

The 17-year-old scheduled a workout for the Drovers before spring break. But the coronavirus pandemic halted the meet up. Thankfully, Hart was able to reschedule.

"I went up there and worked out. (Coach) got back with me and wanted me to show him to what I can do,” Hart said.

After the session was done, Hart said that is when he was offered.

"I kind of got choked up and almost started crying in front of him,” he admitted.

Hart credits his family’s love and support as some of his biggest motivation. His dad, Chad, a former baseball prospect himself, and his mother, Darcey, have helped fuel his love of the game, aiding him every step of the way, and his younger sister Terra is known to be Hart's biggest fan. His grandparents live in Nebraska and Iowa, but still keep close eye on his career.

"Baseball really does bring my family together,” Hart said.

As sports organizations continue to evaluate and plan for reopening, Hart is busy working on his game.

He’s made his own bullpen using a wooden box mound and old pool cover net, and his bird dog has been trained to play a baseball-themed game of fetch.

But as Hart looks back on high school, he said he's proud to have been at Calvin.

"I’m super excited about it…It looks good on my school,” he said. "Stay determined. And when things don’t go your way, you just have to stay determined and do what you can."