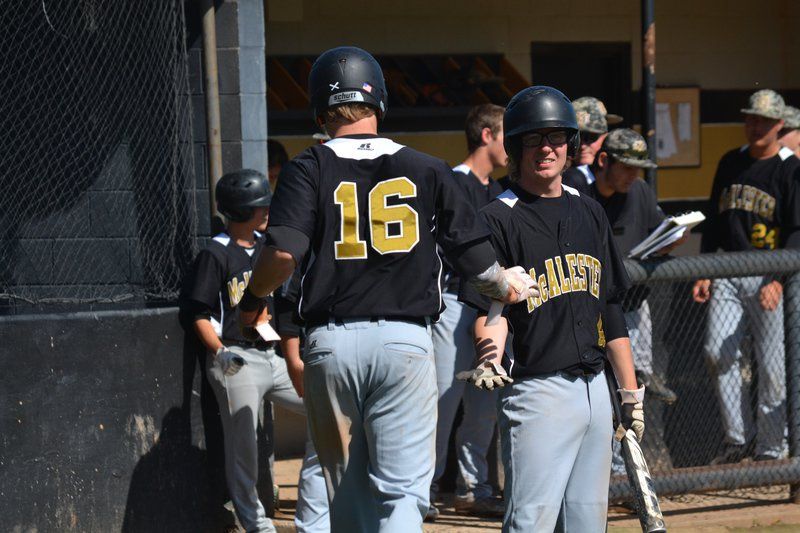 Staff photo by Adrian O’Hanlon IIIMcAlester’s Mason Ross (16) celebrates with Michael Hyden after scoring a run on Saturday during a 13-7 win against Ardmore at Mike Deak Field. 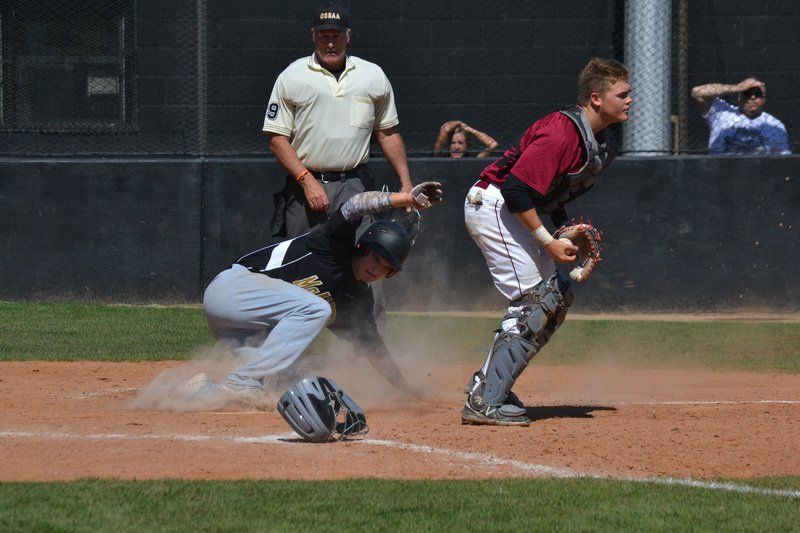 Staff photo by Adrian O’Hanlon IIIMcAlester’s Mason Ross slides in to score on Saturday during a 13-7 win against Ardmore at Mike Deak Field.

Staff photo by Adrian O’Hanlon IIIMcAlester’s Mason Ross (16) celebrates with Michael Hyden after scoring a run on Saturday during a 13-7 win against Ardmore at Mike Deak Field.

Staff photo by Adrian O’Hanlon IIIMcAlester’s Mason Ross slides in to score on Saturday during a 13-7 win against Ardmore at Mike Deak Field.

MCALESTER — Rain cancelled most of Friday’s pool play, but McAlester ended its annual home tournament with a hot day at the plate.

After erasing an early four-run deficit to Ardmore on Saturday, McAlester unloaded for a four-run fourth inning to take control of what had been a back-and-forth game for a 13-7 win at Mike Deak Field to wrap up play in the McAlester Shootout.

“This is the seniors’ last McAlester Shootout so we wanted to go out with a bang,” McAlester senior Zach Baugh said. “We just stepped up and wanted to play ball today, so we did.”

Chase Hass singled in Eales before scoring on a double-steal in the big inning that helped the Buffaloes match their win total from a season ago.

Ardmore (11-15) added a run in the fifth, but McAlester (19-11) got three more after Ardmore walked in Baugh in the fifth, and Hass singled in Homer and Mason Ross for a six-run cushion that became the final score.

With two games left in the regular season — although McAlester is looking at adding a couple of games this week — and the upcoming regional tournament, Baugh said his senior class wants to keep the momentum rolling.

“We want to end the season on a winning streak and go into regionals with confidence,” Baugh said. “(We have to) every day come into practice ready to go win a regional tournament and go to state.”

McAlester’s 10 hits and 13 runs came as a much-needed boost of offensive production. The Buffs opened the Shootout with a 3-2 win over El Reno before being handed an 11-0 loss by Collinsville on Thursday and then getting rained out against Duncan on Friday.

After compiling just three runs and 10 hits in those games, McAlester head coach Justin Bond said his team needed to light up the scoreboard against Ardmore.

Ardmore jumped ahead early with four runs in its first turn at the dish, while McAlester got just one across in the bottom half of the first.

The Tigers got that run back in the second on an RBI double to push their lead back to four.

McAlester’s Michael Hyden led off the second with a single and Conner Stewart singled him to second before a balk moved them both into scoring position.

Baugh — who finished 1-for-3 with two RBIs and a run — drove them both in with a hard grounder up the middle to pull within 5-3.

“Zach’s been playing well all year,” Bond said. “He’s been giving us energy at the top of the lineup and he’s absolutely been playing hard; defensively, offensively. I don’t think he’s been thrown out in all his stolen bases.”

Buffs pitcher Deon Smith — who finished with five strikeouts in five innings pitched — struck out the first two he faced in the third and got the third to ground out.

McAlester kept momentum going on offense with the help of a few Ardmore errors to start the bottom of the third.

Mason Ross reached on a dropped pop up and Mackey Eales reached on a wild throw to first. Hass grounded out to bring in Ross, and Hyden singled in Eales to tie the ball game at five runs apiece. Brandon Rutledge then doubled in Hyden for a 6-5 lead.

Ardmore again tied the game in the fourth before McAlester’s big inning.

Hass finished the game 2-for-3 at the dish with one run and three RBIs, while Hyden went 2-for-3 with two runs and one RBI.

Eales went 1-for-3 with two runs and two RBIs.

Ross was 0-for-1, but drew two walks and scored three times.