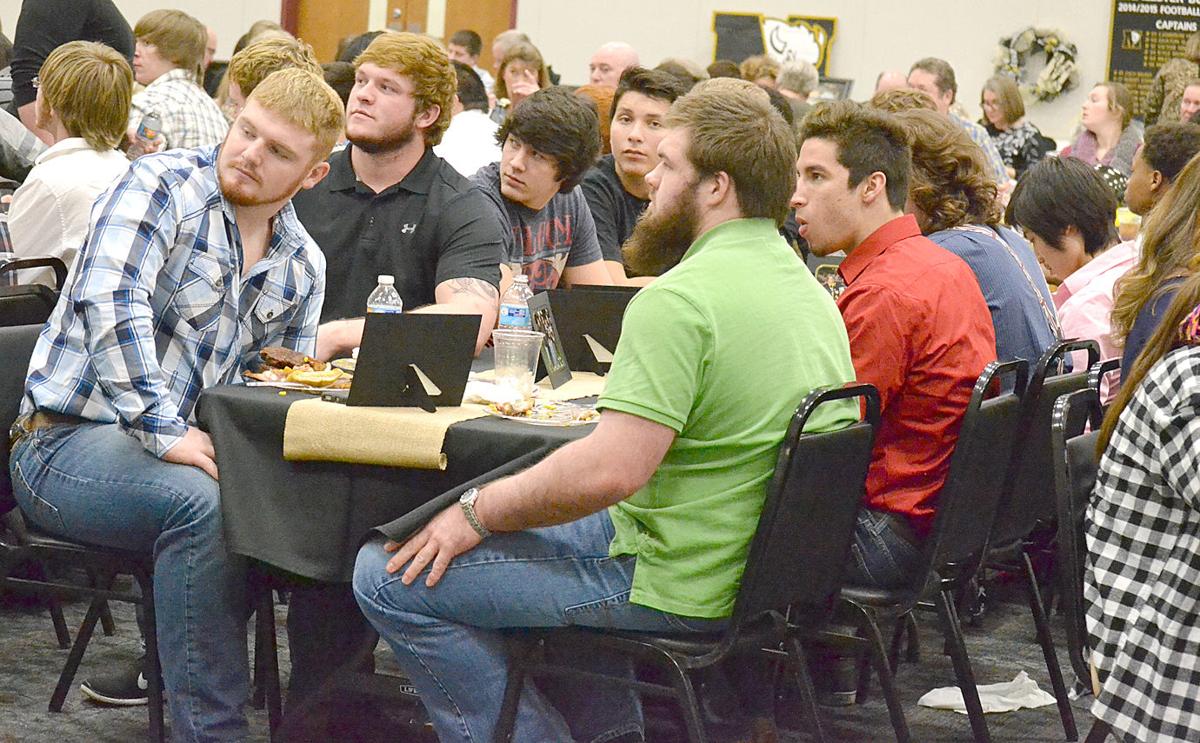 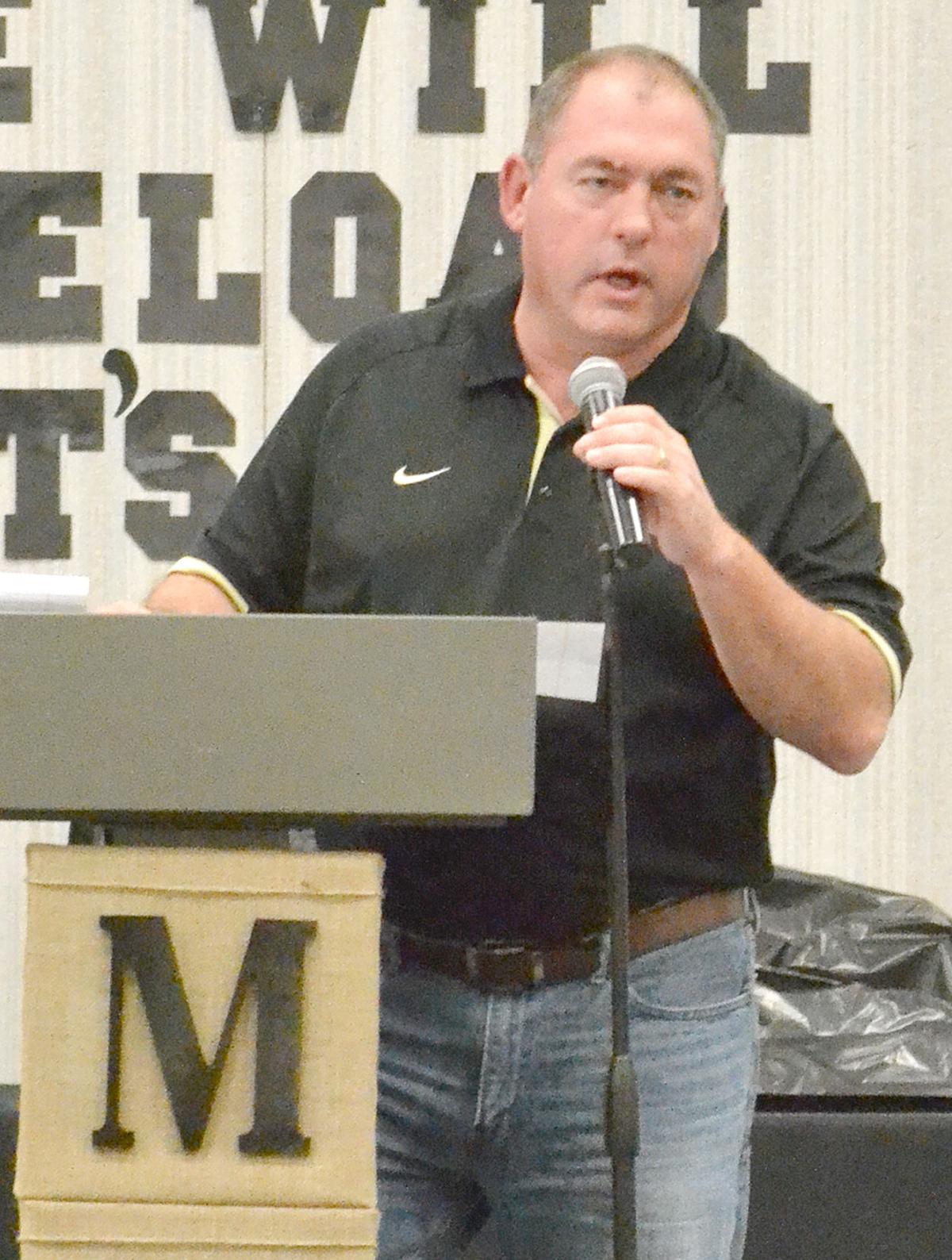 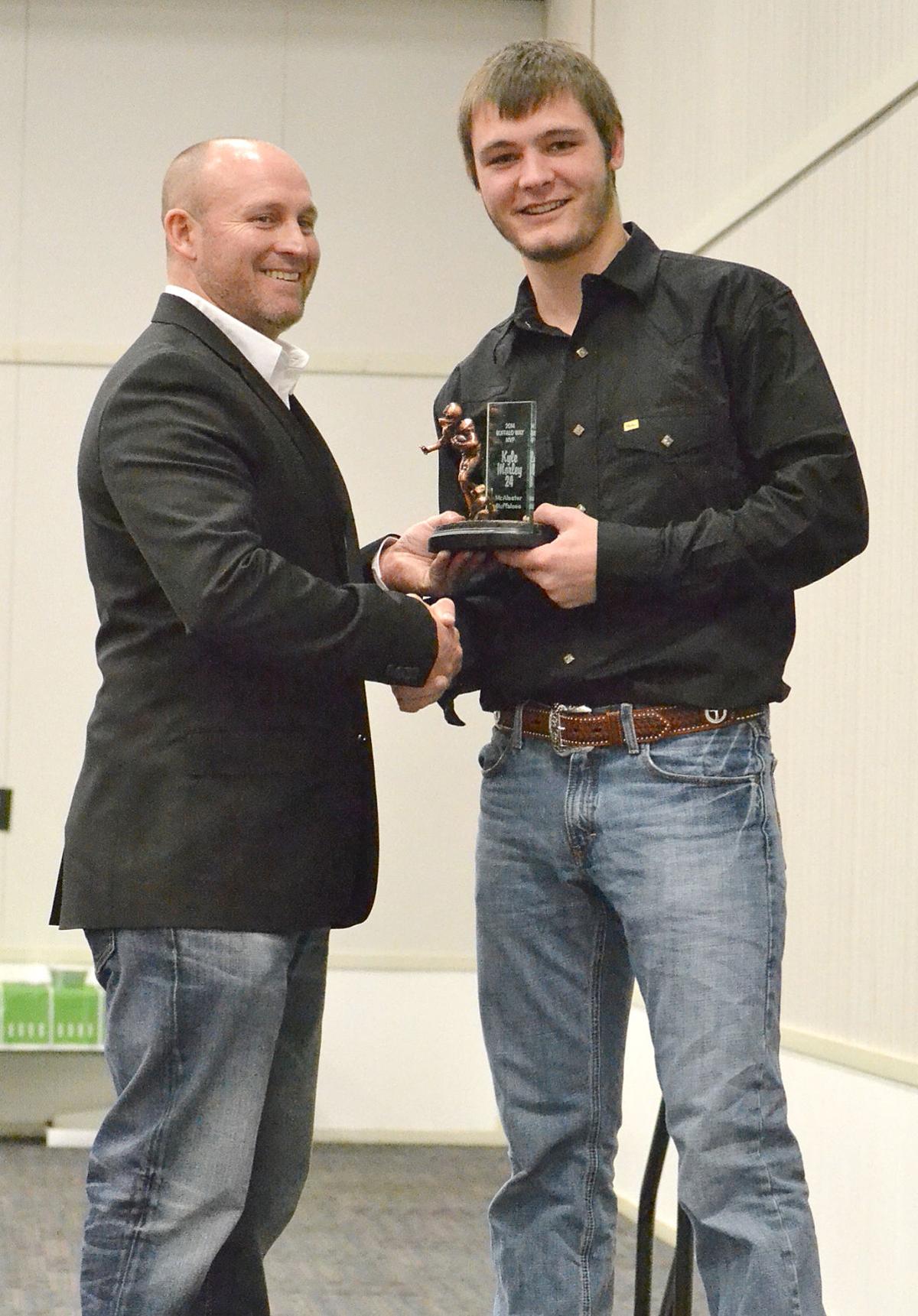 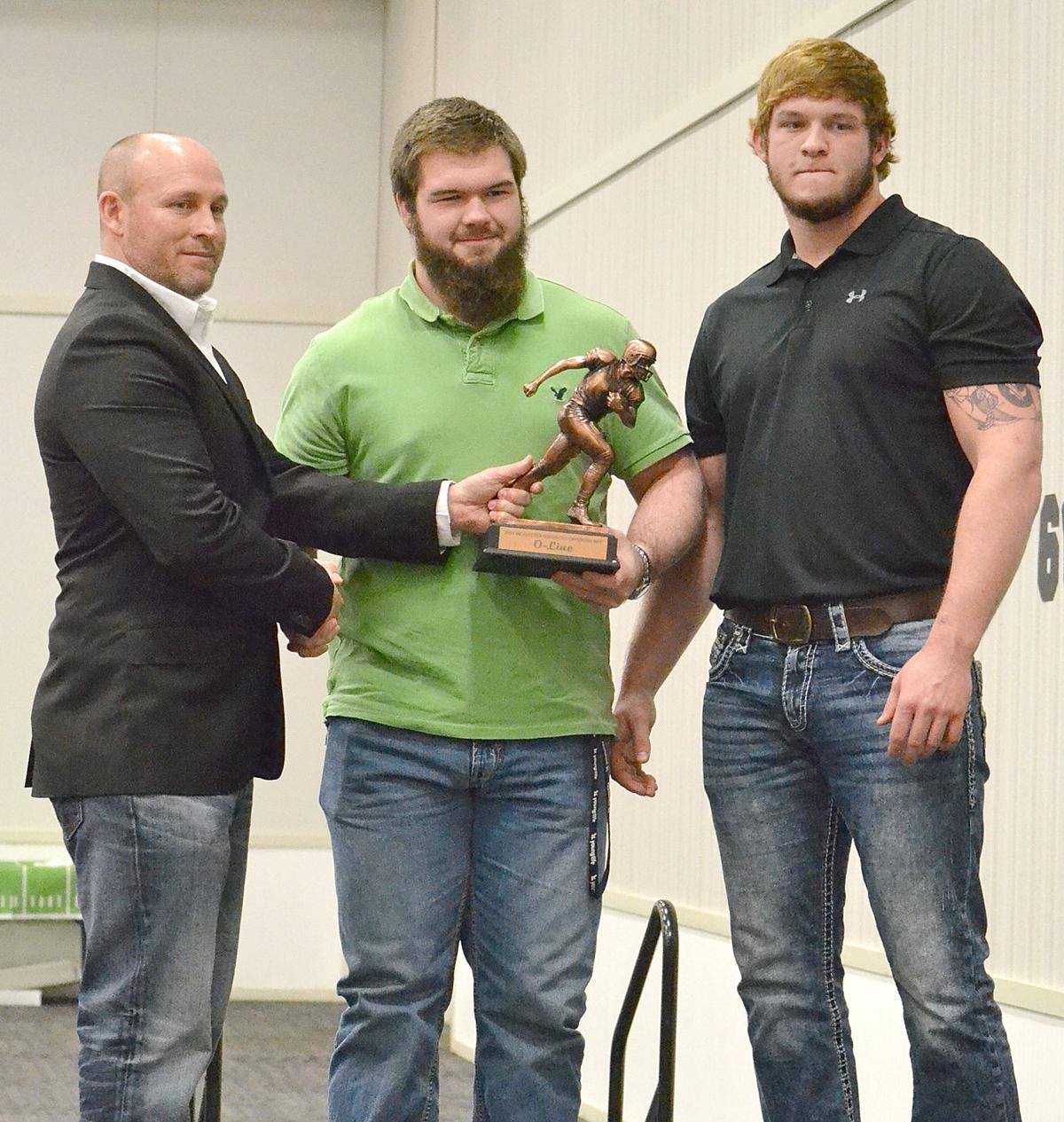 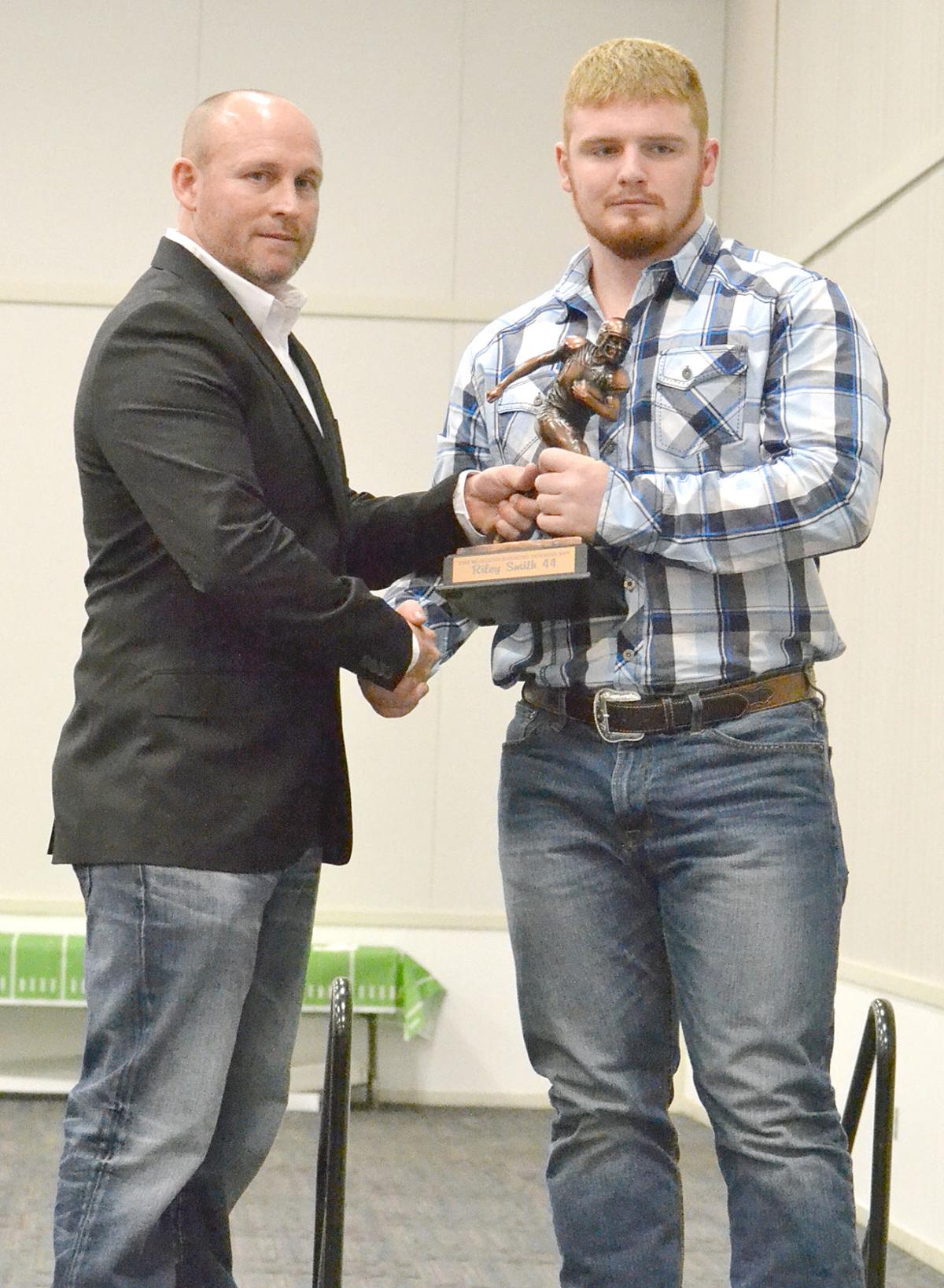 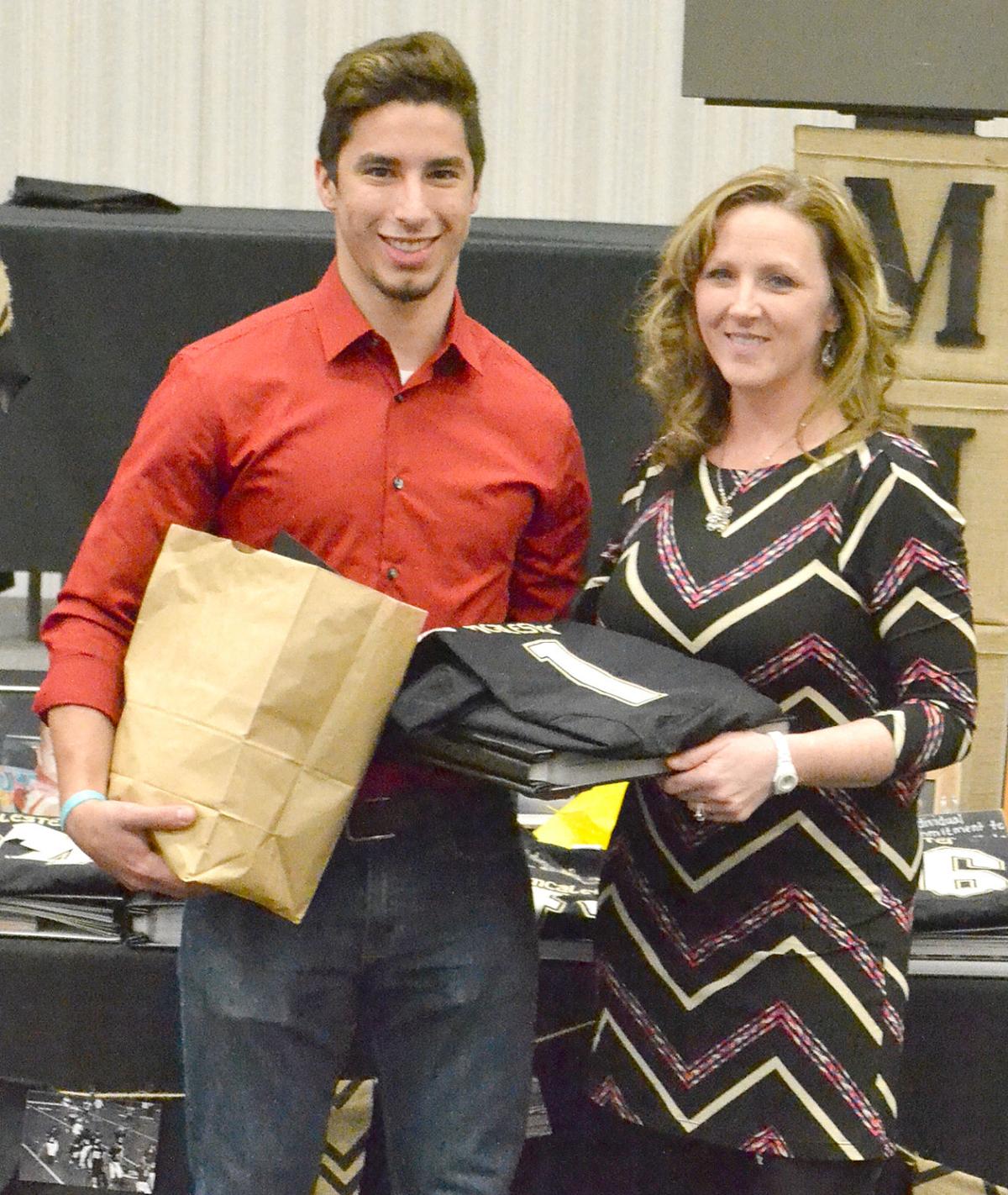 McAlester’s football season starts in August and typically runs into mid-December. The seniors hang up their pads, take off their jerseys and say goodbye to the activity they’ve devoted most of their lives to since at least freshman year.

One more night together, in that context, isn’t much longer than the time it takes to blow out a candle. And that’s exactly what the 2014 Buffaloes’ senior class did at the annual McAlester football banquet Saturday at the Southeast Expo Center in McAlester.

Quarterback Club president Ralph Morley provided opening remarks, then Buffs captain and senior linebacker Victor Mills gave the opening prayer. Festivities broke for dinner, then Pratt kicked off the award ceremonies with letters for anyone who appeared in a varsity game this season.

“We have it really good here,” Pratt said. “This is a great community, great school system, great kids, great parents. ... In the last six years, we are 63-14. The last four years, we’ve been to the state semifinals every year and the state finals once.”

Pratt went on to recognize Buffs who won All-District or All-State honors this season, then gave out the “Black Death Defense” T-shirts traditionally given to the graduating seniors. Fourteen Buffs then were called up to receive “Ironman Awards” for attending all mandatory football activities.

Hunter moved to McAlester from Texas about a year ago. Highlights from his one year as a Buffalo include earning team captaincy, earning All-District and All-State honors and putting up 17 touchdowns and more than 1,000 rushing and receiving yards as McAlester’s go-to wide receiver.

“It’s the best year I’ve had,” Hunter said. “Coming in here, and just having everybody be so supportive of you, and being just that new guy that everybody wants to try to figure out what kind of person you are, it’s just cool to have that desire from other people.”

Kyle Morley won the “Buffalo Way Award,” which goes to the senior coaches felt best represented the ideals and goals of McAlester’s football program. Morley broke his arm saving a touchdown during McAlester’s Class 5A state semifinal against Lawton MacArthur and was still in a sling when he accepted the award.

Kyle Morley was later named McAlester’s overall Most valuable Player, an award voted on by players.

“If you want to know where Kyle gets his toughness from, it’s from his mother,” Ralph Morley, Kyle’s father, said. Ralph is a former Buffalo himself, and like Kyle one point served as a team captain.

Dalton Wood was named McAlester’s offensive MVP, but he didn’t keep the trophy. Pratt told the audience that prior to the ceremony Wood had called Pratt and asked that if Wood won an award, it could instead be given to his offensive line.

“He’s been out there in front of me for the most years and played the most snaps,” Wood said of Ferrell.

“Your high school team are the kids you’ve grown up with since you were a little kid and first started walking. It’s definitely one of the things you always look back on and remember and cherish.”

Nose guard Riley Smith was named Defensive MVP. Given Wood’s offensive and Smith’s defensive dominance over the last two seasons, neither player’s MVP selection came as much of a surprise.

“You don’t realize it’s going to be that special until you put in all the hours and (go) through everything together,” Smith said of being a Buffalo. “It’s built me as a person and helped me become the leader that I am.”

“This is a program,” Ralph Morley said. “It’s not a football team. It’s a program.”

Graduating seniors received their commemorative jerseys and scrapbooks, then the candlelight ceremony began. Each senior player and trainer stood with a lit candle as coach Austin Maddux wished them well, then one by one each blew out his or her candle.

“They have worked together, laughed together, fought together, played together, and yes, cried together,” Maddux said. “As this part of the journey comes to an end, we must remember all the joys of being a McAlester Buffalo.”

The night concluded with a closing prayer from Mills, and that was it. The last moments for McAlester football’s senior class, brought together and then separated like a lit and then extinguished flame.