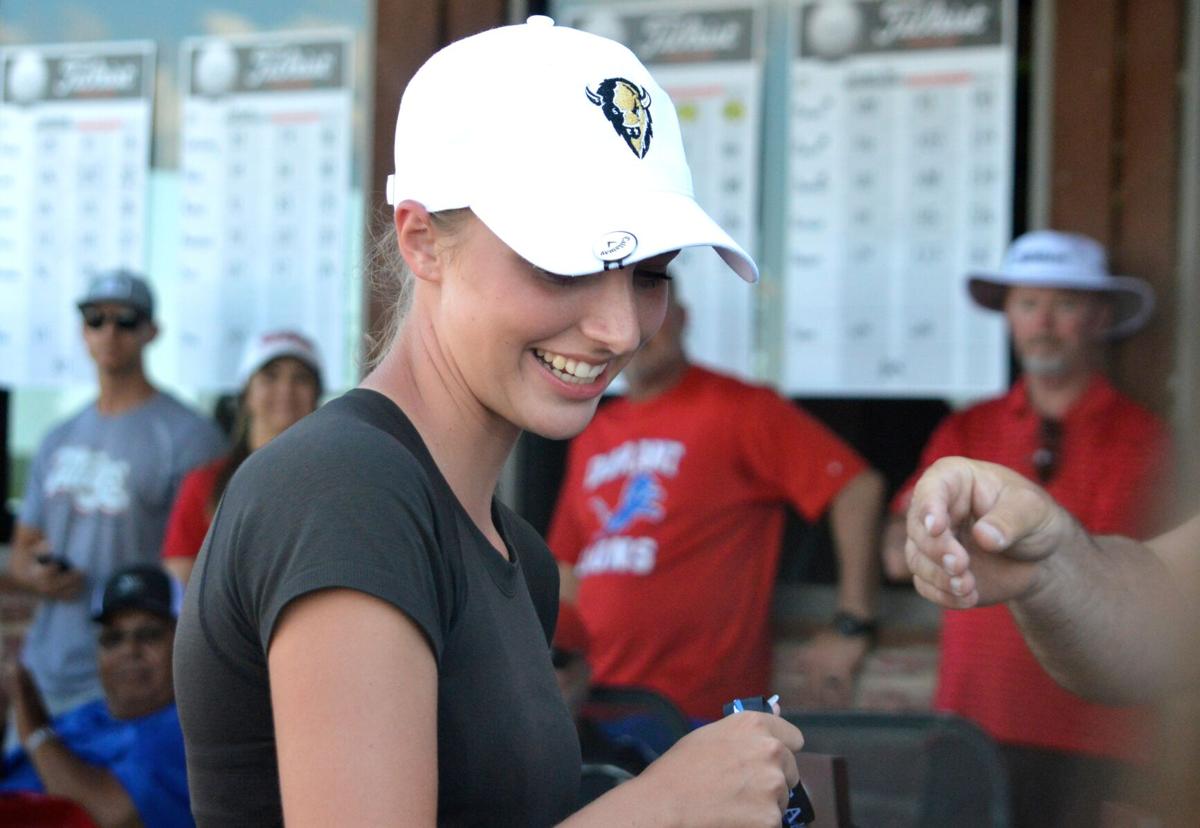 McAlester's Aubrey House accepts her medal as state runner-up. She finished with a final two-day score of 146 — just three strokes shy of the lead. 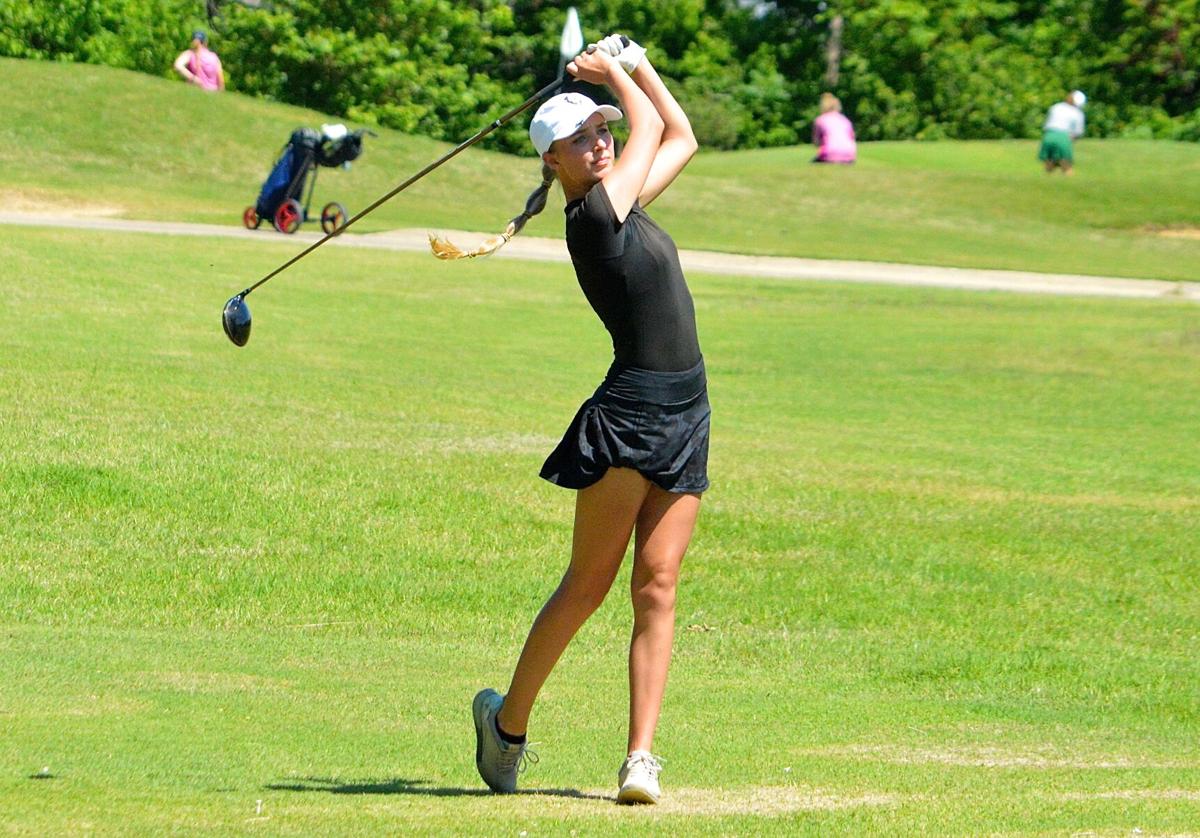 Aubrey House watches a ball she's driven down the fairway during the OSSAA Class 5A State Tournament. 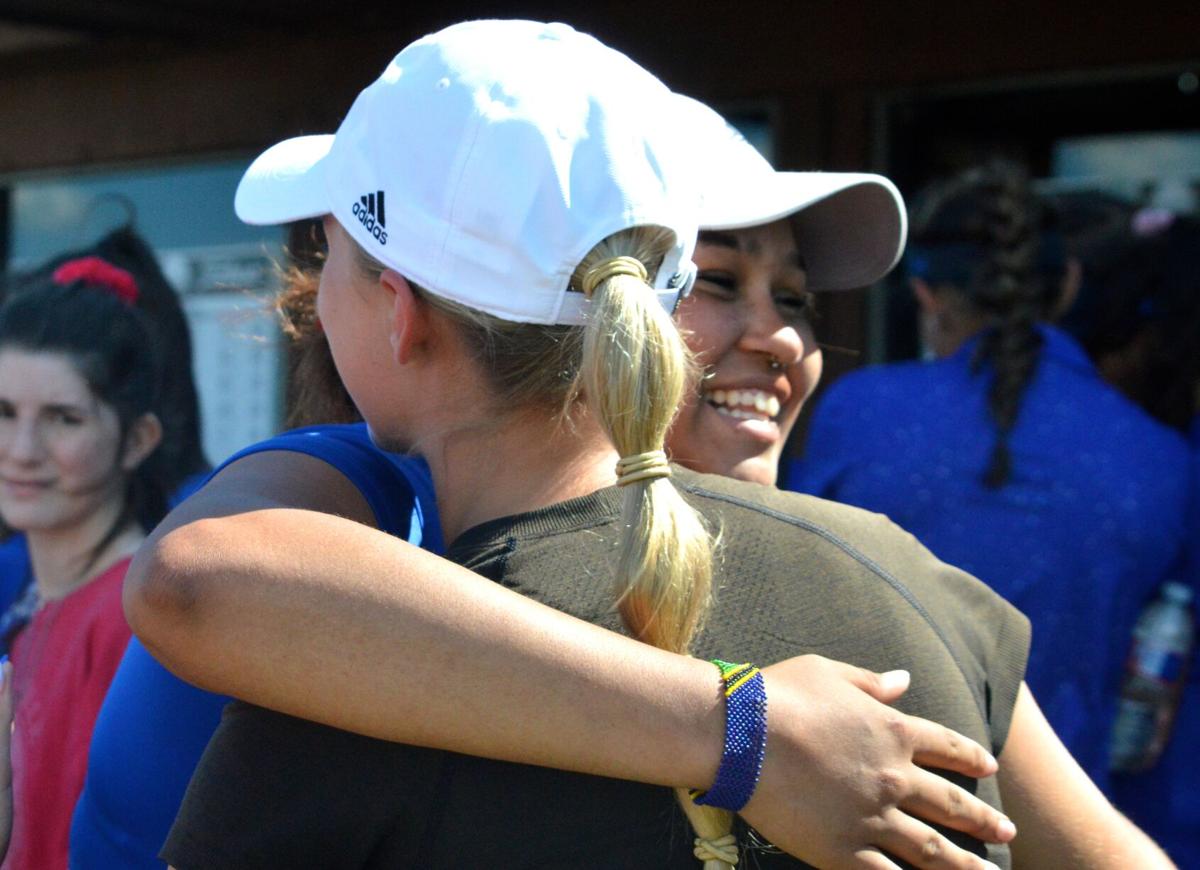 McAlester's Aubrey House shares a smile and embrace with Durant's Mikaela Karanja after the pair finished as the top two in the state, separated by just three strokes.

McAlester's Aubrey House accepts her medal as state runner-up. She finished with a final two-day score of 146 — just three strokes shy of the lead.

Aubrey House watches a ball she's driven down the fairway during the OSSAA Class 5A State Tournament.

McAlester's Aubrey House shares a smile and embrace with Durant's Mikaela Karanja after the pair finished as the top two in the state, separated by just three strokes.

KINGSTON—Aubrey House made her mark in McAlester history.

“I’m feeling very excited,” House said. “There were some shots I passed up, and I had some bad holes, but I think that’s golf for you.”

“I feel pretty blessed,” she added.

After an impressive first day Wednesday, House found herself with a score of 71 — just one stroke off the lead behind Durant’s Mikaela Karanja.

After a little bit of a slow start on the second day, House found her groove. With multiple birdies, House powered her way through the tough course, putting herself in prime position to contend for the top spot.

But on the final hole, a hazard discrepancy forced House to play a provisional. After a review from the course pro, it would be determined House would have to officially use the ball with the extra stroke — bringing her total to a 75 on the day.

“It’s definitely hard,” she said. “You just have to forget about those holes and move on and just play another hole. It’s hole by hole and shot by shot."

From then, it was a waiting game for House, who finished before Karanja. Fans and families waited with bated breath, as results continued to roll in.

Karanja would be the last golfer of the day, and finish with a 73 — taking the state title by just three strokes. She and House shared an embrace after the scores were talented, and congratulated each other on the hard-fought battle.

And it’s relationships like that House said are one of her favorite parts of the game.

“It was fun,” she said. “I love making these friendships with these girls…the bond just keeps growing and growing."

Coach Seth Burgess said he was extremely proud of his junior golfer, especially with some of the adversity she faced in the tournament.

“She came out yesterday with a mission…had a bit of a rough start today, but she came back quick,” Burgess said. “I’m so excited for her, pumped for her. I know it’s not the goal…but state runner-up is nothing to be ashamed of at all. I’m just extremely proud of her."

And for House, the journey isn’t over yet. She’ll be hitting the course hard over the next few months, because she’s got one goal left to fulfill next season.

“I’m excited for senior year, for sure,” she said. “Because senior year, I’m going to get first. I have a feeling."