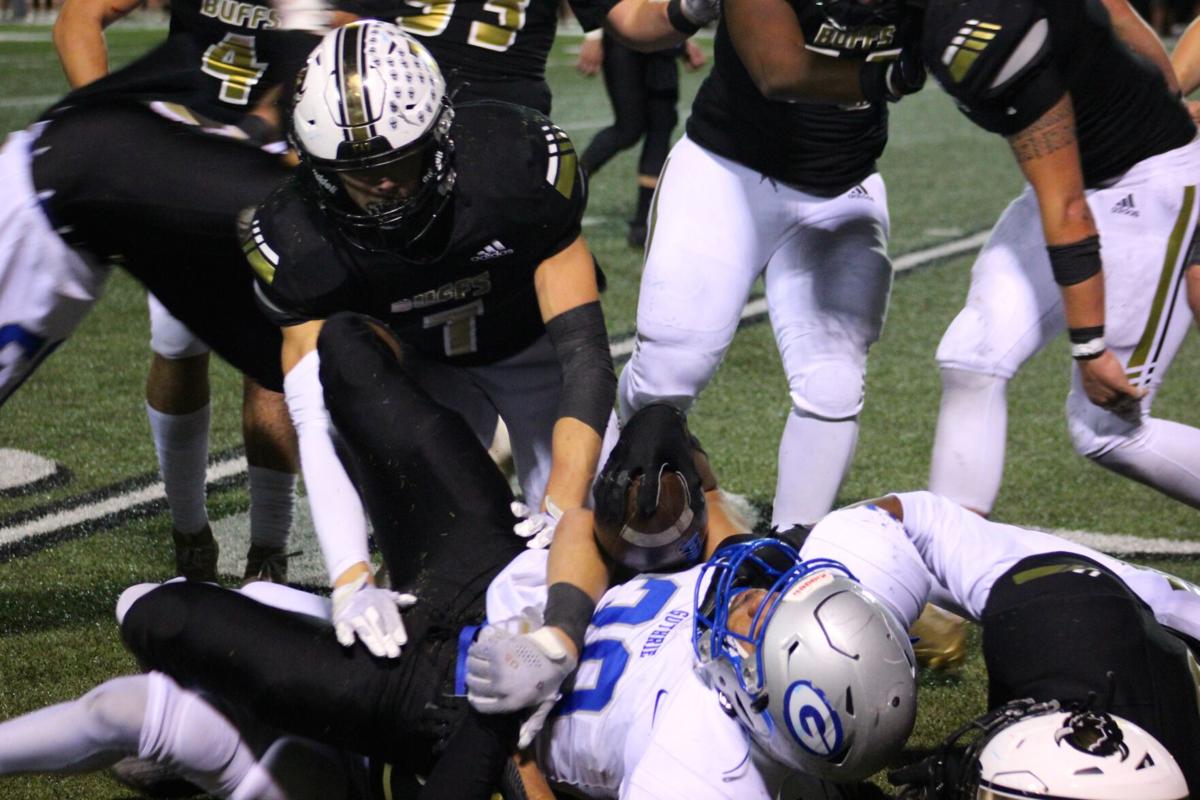 A swarm of Buffaloes takes a Guthrie player to the turf during McAlester's 27-21 win over the Bluejays on Friday. 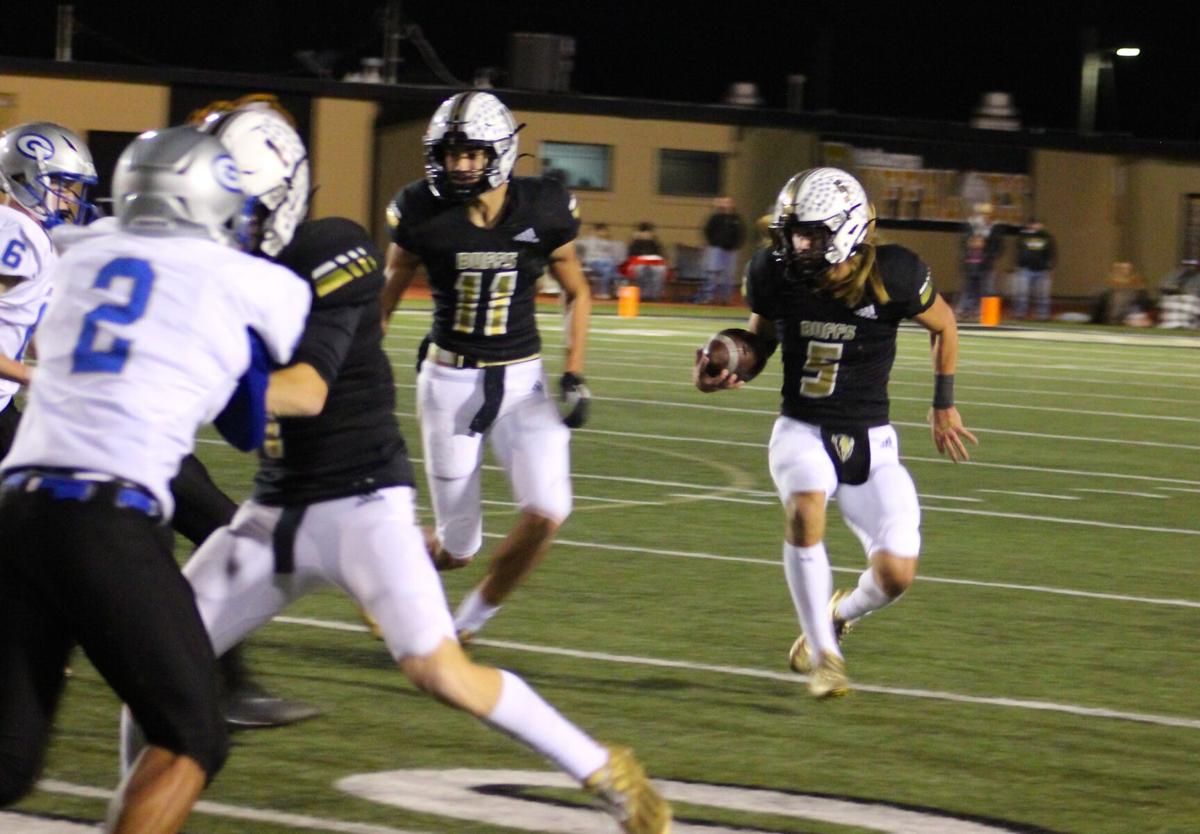 Erik McCarty eyes up the Guthrie defense during a run in the first half of McAlester's Class 5A state quarterfinal game on Friday.

A swarm of Buffaloes takes a Guthrie player to the turf during McAlester's 27-21 win over the Bluejays on Friday.

Erik McCarty eyes up the Guthrie defense during a run in the first half of McAlester's Class 5A state quarterfinal game on Friday.

Guthrie pulled within one score in the fourth quarter before McAlester’s Killian Barnes disrupted a pass that essentially sealed a trip to the semifinals.

Top-ranked McAlester (12-0) faced its first deficit of the season early, but took a two-score lead late against No. 7 Guthrie (10-2) before its defense lifted the Buffs to a 27-21 win Friday and into the Class 5A state semifinals.

Coach Forrest Mazey said his team saw adversity, but he was proud they lived up to the team motto of “effort, attitude, and toughness” — aka EAT.

“They kind of punched us in the mouth and we had to regroup,” he said. “We did a good job of gritting our teeth a little bit and living that EAT mentality. I’m super proud of the kids and the coaching staff.”

McAlester advanced to the state semifinals against Lawton MacArthur, which took a 40-0 win Friday against Pryor.

The winner of that semifinal will advance to the state championship game set for 7 p.m. Dec. 4.

“Another opponent that we need to beat from years past,” Mazey said. “They’ve knocked out some former (McAlester) teams. We’ve got a lot of things to do, and we’ve got to be prepped for them.

Guthrie got on the board first Friday with Isaiah Hammons running 52 yards for a touchdown — but defense would take over for both teams for the remainder of the quarter as McAlester trailed for the first time this season.

McAlester’s defensewould swing momentum back toward the Buffs with Cale Prather picking off a pass.

Just a few plays later, Erik McCarty — who finished with 23 carries for 193 yards and two touchdowns — wound his way around the Bluejay defense and jolted out 37 yards to help tie the game 7-7 after Kobe Clark’s extra point kick.

Guthrie answered on the next offensive possession, with Hammons once again escaping for a 67-yard scoring romp.

But the Buffs stayed determined, and drove down the field deep into Bluejay territory. That’s when quarterback Trent Boatright floated a pass over the middle to Prather for a 19-yard touchdown toss for a 14-14 tie at the half.

McAlester’s defense gave Guthrie fits coming out of the break.

A sack by Garrett Shumway pinned the Bluejays against their own goal line and forced a punt — setting McAlester up deep in enemy territory.

It would take long for the Buffs’ offensive wheels to get churning, and Boatright would find Lleyton Bass on a short pass to the left side — with Bass bolting out 27 yards for the score and giving McAlester its first lead of the game at 20-14.

After another steel wall stop by the defense, the Buffs would take back possession on their own seven yard line. A McCarty run would put McAlester near midfield, and he’d take a carry just a few plays later 54 yards all the way to the house to extend the lead.

Guthrie looked to answer with a pass on third down at midfield — but McAlester’s Greg Quintana leapt into the air and picked it off, much to the delight of the home fans.

Defensive efforts took over once again, with the Buffs stopping the Bluejays at every opportunity.

Guthrie would finally find a way to get just passed the defense, scoring with just over seven minute remaining to make it a one-score ballgame with McAlester leading.

The Bluejays attempted an onside kick, but it was scooped up by Killian Barnes, who safely returned it to the McAlester 35.

The Buffs would be forced to punt it away, giving the ball back to Guthrie with 5:02 remaining.

Boatright finished the night 8-of-11 through the air for 65 yards and two scores, while Bass caught two passes for 32 yards and a score, and Prather had one 19-yard touchdown reception.