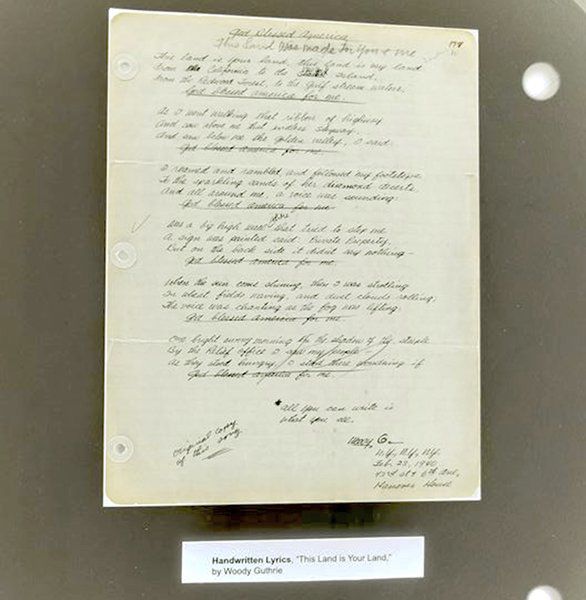 Dawnyal Hill | Staff photoPictured are the handwritten lyrics by Woody Gruthrie for his song "This Land is Your Land" on display at the Woody Guthrie Center in Tulsa. 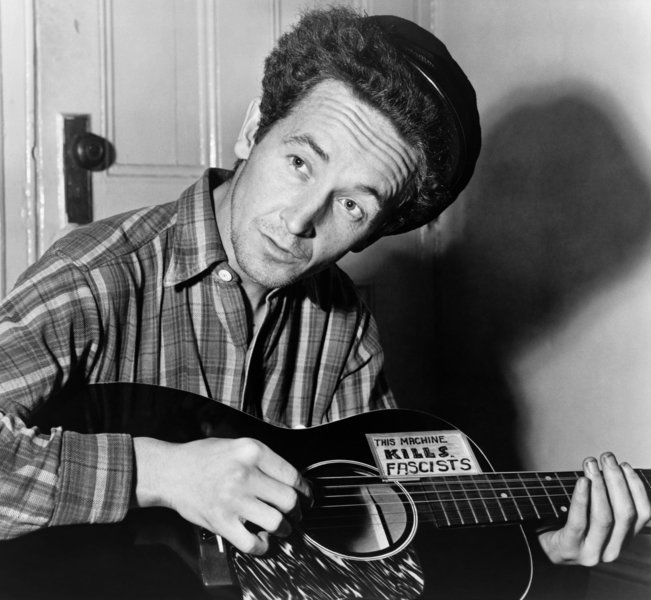 Library of Congress photoOklahoma songwriter Woody Guthrie, whose song "This Land Is Your Land" will be honored with an 80th birthday celebration in New York City, hosted by the Woody Guthrie Center in Tulsa.

Dawnyal Hill | Staff photoPictured are the handwritten lyrics by Woody Gruthrie for his song "This Land is Your Land" on display at the Woody Guthrie Center in Tulsa.

Library of Congress photoOklahoma songwriter Woody Guthrie, whose song "This Land Is Your Land" will be honored with an 80th birthday celebration in New York City, hosted by the Woody Guthrie Center in Tulsa.

However, it's highly justified when the song is one as special as "This Land Is Your Land," written by Oklahoma's own Woody Guthrie 80 years ago.

"This Land Is Your Land" is set for a birthday celebration on the 80th anniversary of the song's writing. A celebratory concert is set for Feb. 23, 2020. Although the event is in New York, it's hosted by the Tulsa-based Woody Guthrie Center.

It's set to be held at The Town Hall, which is described by the Woody Guthrie Center as "around the corner from where Guthrie wrote the song on Feb. 23, 1940."

I remember first hearing "This  Land Is Your Land" as a kid — and how thrilled I was to learn it had been written by an Oklahoma songwriter. Not only that, but one who grew up not so far up the road, in Okemah.

It proved to be a long road from Okemah to the room at the Hanover House in New York City, where Guthrie wrote the song while staying in a room at the hotel.

Guthrie, of course, wrote lots of great songs in addition to "This Land Is Your Land." A few of the many he wrote include "Pastures of Plenty," Do Re Mi," "So Long, It's Been Good to Know You," "Pretty Boy Floyd" and numerous others.

One of my favorites Guthrie wrote in collaboration with his cousin, country singer Jack Guthrie, is "Oklahoma Hills" — which not only was recorded separately by both Woody and Jack, but also became huge hit for country artist Hank Thompson in 1961.

Although Woody and Jack collaborated on the song, Jack's recording became the hit — reaching number 1 in 1945 on what was then called the Juke Box Folk Records charts.

Six years later, another country artist often associated with Oklahoma, Hank Thompson, recorded a version with his band the Brazos Valley Boys that climbed it number 10 on the Billboard Hot Country and Western Singles chart. Thompson recorded a Western swing-influenced version of the song — which ended with a couple of rounds of "Boomer Sooner" from the fiddles and steel guitar in his band.

Woody's son, Arlo Guthrie, also recorded a rousing version of "Oklahoma Hills" which served as the opening track to kick off his 1969 album, "Running Down the Road."

While "This Land Is Your Land" is justly being celebrated on the 80th anniversary of its writing, it's not the first time the song has been celebrated. The Library of Congress selected the song in 2002 for inclusion in the National Recording Registry.

The song has been recorded by many others, who have interpreted it in ways ranging from a bouncy anthem to an affirmation by a wear soul. One of my favorites is a 1961 live recording by Bob Dylan. Although Dylan was just 20 years-old at the time, he brings a road-weary gravitas to his take on the song, light years away from the anthemic versions we often hear.

While the "This land is your land, this land is my land" chorus about the Redwood forests and Gulf stream waters are well-known, along with the main verses about the "ribbon of highway" and the "endless skyway", the last verses are often excluded when the song is recorded and performed. Quite not as celebratory about the nation's physical beauty, they touch on the hard times many Americans had gone through during the Great Depression.

That's why I always include one while singing the song during the Hard Times Day Festival festival held at Hartshorne each October. "As I went walkin' and I saw a sign there and that sign said No trespassing. But on the other side, it didn't say nothing. That side was made for you and me."

The last time I played the song, with an assist from Rosco and the Heads, I saw Paula Thomason as I stepped off the outdoor stage. "Hey James," she said, "I sang along — on all the verses."

Word is that those attending the 80-year celebration on Feb. 23 plan to sing all of the verses, too.

Although the concert is being held in New York, proceeds from the concert will be used to help the Woody Guthrie Center "continue its mission of sharing Guthrie's mission of diversity, equality and social justice, providing tours of the museum, admission to the museum and music workshops at no cost to students."

One of the most intriguing things about the New York concert is not only the appearance of artists such as Tweedy and Fullbright, but also a hint that some surprise guests will appear.

Giving the long list of artists influenced by Guthrie, it's going to be interesting see who those guests will be.

Frank D. Autrey, 75, of McAl-ester and currently Durant, died peacefully at his home on Saturday, March 4, 2020. Frank is survived by his wife, Ann; sons, Clint and wife, Alana, and Chris, and grandson, Cash. Viewing will be today until 5 p.m. Due to the current health issues, a celebration …