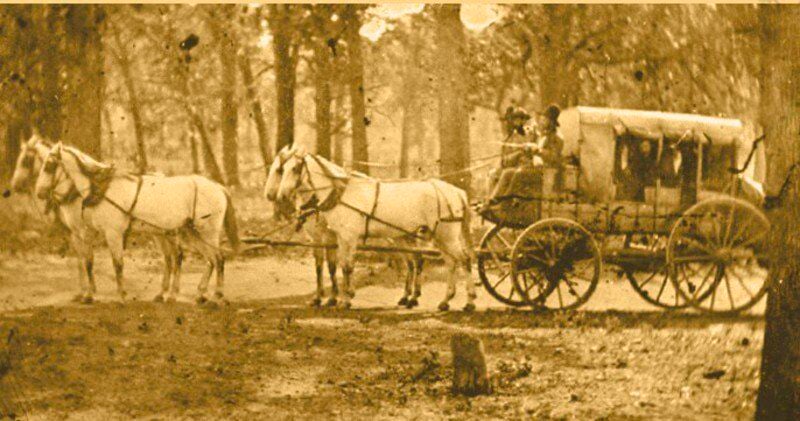 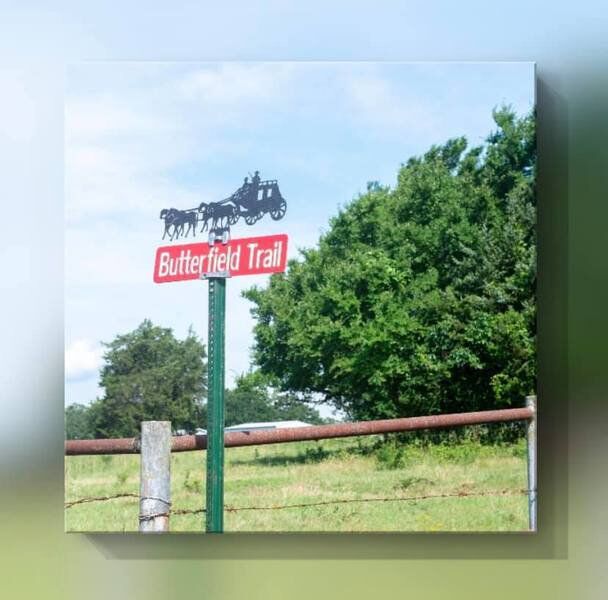 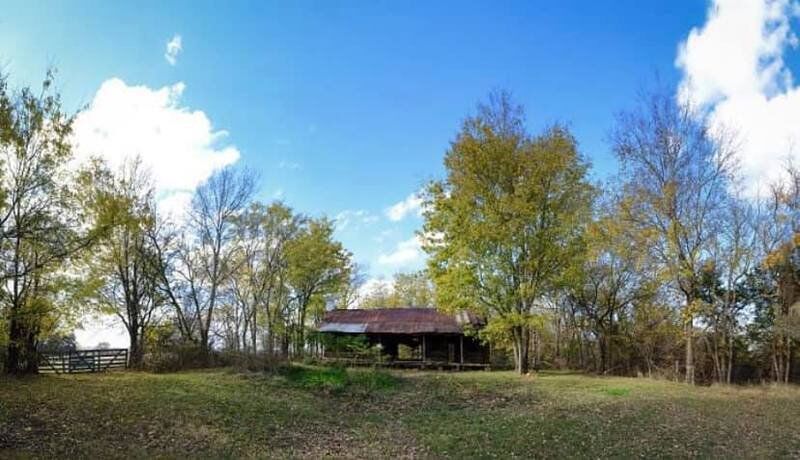 EDITOR'S NOTE: This is the first of a two-part series.

With June comes it's the season for tourists or maybe a great time for locals to also become tourists and get out and explore our own backyard. This column and the next will remind us of the historic Butterfield Overland Mail Line that beginning in 1858 traversed a segment of what is now Southeastern Oklahoma, some new developments underway in our area on the trail, and a most interesting occurrence on the Butterfield in our area in 1860.

Four times each week in between 1858 and 1861 a stage pulled into and stopped at each station to deliver mail, occasional passengers, change teams, then dash on toward its destination at San Francisco, if westbound or Tipton, Missouri if eastbound.

Before 1848 there was little demand for overland mail service to the west coast. Water routes around Cape Horn or across Panama were sufficient. Then with the discovery of gold in California in 1848, and thereafter over most of the western states and territories, and as the settlements increased in number and size, the need for a faster and more direct mail service was recognized.

Mining officials, land developers, government agents as well as the general public, needed faster communication and dispatch of official documents. Pressures began on the Congress to provide this service to the west coast and by the year 1857 Congress was ready to act. Three routes for a mail stage line were proposed with the Postmaster General choosing the third option or southernly route — St. Louis to Ft. Smith, Arkansas, southwestward through the Choctaw Nation across the Red River through Ft. Belknap and Ft. Chadbourne, on to Franklin(El Paso). From here the route would traverse southern Arizona by way of Tucson and Ft. Yuma, cross the Colorado River and Mojave Desert to the Coast Range and extend up its valleys to China, Pomona, Los Angeles then north through the San Joaquin valley to San Jose and San Francisco.

The Overland Mail Coaches traveled day and night on the 24- day trip. The fare from St. Louis to San Francisco was $200 one way. Local or “way passengers paid 10 cents per mile. These local passengers rode the stage whenever there was room. Often there was room inside and sometimes one could hang on to the side or rear. Butterfield had some rigid rules of operation which made it possible for him to fulfill his company’s slogan “The Mail Must Go Through On Schedule.”

Some of these operating rules were: Fresh teams must be harnessed and ready to change when the stage arrived; personnel at the station must be ready to make any repairs to equipment-coach, wheels, tongues, canvas shelters, etc.; mail must be protected at all costs; meals must be available and ready at designated stations when the stage arrived. The cost of a meal ranged from 45 cents to $1. Because the mail stage routes often followed roads already used in the Missouri, Arkansas and Indian Nation country, there were a few trading posts or stores in existence where mail was delivered and meals provided which were not Butterfield Company stations.

The site of the first Butterfield Station in the Choctaw Nation, 15 miles west of Fort Smith (Skullyville) was known as Walker’s Station. It was in the home of Tandy Walker, governor of the Choctaw Nation at that time.

Leaving Walker’s Station, the mail road extended southwest crossing present U.S. Highway 271 at the southeast corner of Spiro and on to the intersection of State Highway 31 and 271 north of Panama, then three miles southwest to Brazil Creek, then three miles southwest at the present community of Lathan was the next Butterfield Station — Trayhern’s. This station was in the home of James Trayhern, a prominent mixed-blood Choctaw who served a number of years as a member of the Supreme Court of the Choctaw Nation.

From Trayhern's to the next station, 19 miles to the southwest, the road followed rather closely the present county road through Walls, crossing into Latimer County. As the stage road extended westward the valley became narrower and west of present day Red Oak a small pass between the mountain crest permitted the stages to break through to the long valley to the south that made possible an easy westward course for 20 miles. This pass is referred to and was known as the Narrows. The gap in the San Bois Mountains at this point was about one-half mile through and at the northern end of it William Holloway established a Butterfield Station.

Between the official Butterfield Stations of Trayherns' and Holloway, the road passed one of the famous stores on the mail line through the Choctaw Nation — The Edward Store established about 1850 by Thomas Edwards. When the Butterfield was routed through Gaines County of the Choctaw Nation, it passed by this store and immediately business increased. Edward handled all of the merchandise normally used by the local Choctaws and also handled mail from Ft. Smith Star routes. Since the Butterfield stages often arrived about mealtime, Edwards set up a meal station in a part of his store building, charging 45 cents for a meal. The thriving community was given the name Red Oak by Edwards and in 1869 an official U.S. post office was created with Edwards as the postmaster.

Today, The Edwards Store remains standing east of Red Oak, north on OK 82 and east on Norris Valley Road and is currently undergoing an extensive restoration and program development effort. A small parking area is available along Norris Valley Road and a short hike will allow visitors to view the progress of this special Choctaw and Butterfield site.

From the Narrows, the mail road crossed the valley and turned west on higher ground along the base of the ridge that forms the south boundary of the valley. It then extended west 11 miles fording Little Fourche Maline Creek near Panola and then proceeding on to the gap cur through the ridge by Big Fourche Maline Creek. Here the road curved south around the hillside to the east and then, just around the hill, it cross Big Fourche Maline on a bridge build by the next station keep John Riddle. The Riddle Station was east of the present city limits of Wilburton, just east and across the road from the Lutie Cemetery.

From Riddle’s Station the road stretched westward through Wilburton and beyond crossing the present State Highway 1 about a mile west of the present Higgins School then passed on to a crossing on Gaines Creek three fourths mile west of the highway crossing. A mile beyond the Gaines crossing was the site of the next Butterfield Station, operated by Silas Pulsey and call the Pulsey Station.

South and west of Hartshorne leading to Counts the stage road began traversing the same route as the present road into Ti. From Ti the road follows Elm Creek on the south to its present intersection with the Indian Nation Turnpike. Just south of this intersection on the east side is the site of Pine Top School and about a half-mile south of this was the location of the Blackburn Station operated by Caspar B. Blackburn

Atoka County is also home to Geary’s Station it was located on the east side of Little Boggy Creek (North Boggy Creek). It was operated by A.W. Geary, an inter-married Choctaw. His wife Lucy was the sister of a Choctaw chief. The Choctaw Nation had awarded Geary the privilege of building a bridge and tollgate at the Little Boggy crossing on the Fort Smith-Boggy Depot Road in 1858, which later became the route of the Butterfield Overland Mail stage.

• Boggy Depot — Located on Boggy Creek in what is now Atoka County (in Boggy Depot State Park). It was named for the creek.

• Nail's Station — Located in what is now Bryan County, it was named for Joel H. Nail, the station operator.

• Fisher's Station — It was located in what is now Bryan County.

• Colbert's Station & Ferry  — Located in what is now Bryan County, it was named for Benjamin F. Colbert, a prominent Chickasaw tribal leader and operator of the ferry. In addition, the ferry was important Red River crossing for the Texas Road and portal between the Indian Nations and Texas.

There were 12 official stage stations in Indian Territory, from 13 to 19 miles apart. The total length of the route across the territory was approximately 197 miles.