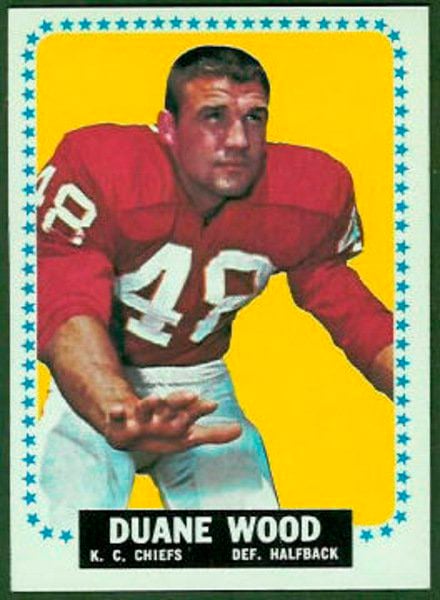 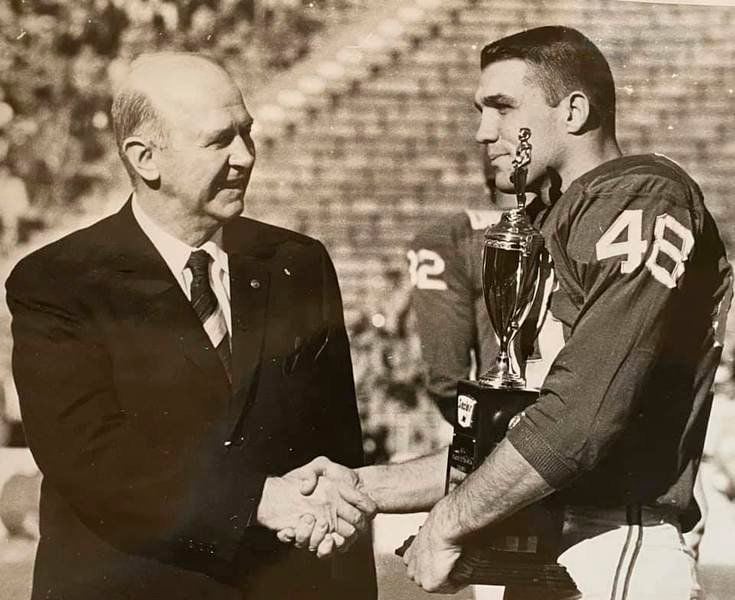 With the Kansas City Chiefs victory at last weekend’s 54th NFL Super Bowl, it seems the very best time to remember the late Duane Wood, of Wilburton. He was an inaugural Kansas City Chief when Texans became Chiefs, who had played Oilers which later became Texans, and all of this was in the American Football League. Stand by, this will all get sorted out for you, including how the “Chiefs” got their name.

Duane Wood’s football career began as a Digger at Wilburton High School graduating in the Class of 1955. He was a multi-sport athlete at Wilburton High School. He lettered in football, basketball, baseball and track all three years in high school and was named Black Diamond All-Conference and Oklahoma All-State Football as a senior. Wood received a football scholarship to Oklahoma A & M (Oklahoma State University) and appeared as both a running back and a defensive back.

One of Wood's collegiate highlights came during the inaugural Bluegrass Bowl in 1958 in Lexington, Ky. Wood ran for 81 yards and scored two touchdowns as the Aggies defeated Florida State. The game was nationally televised on ABC and it was the first national telecast to feature Howard Cosell. Two weeks later on Christmas Day 1958 Wood played on the Blue Team in the annual Blue/Gray Game in Alabama where he ran back a punt for a touchdown and was named Outstanding Player of the annual game pitting college seniors from the south against the north.

“I didn’t wait for the National Football League to draft me. In 1959 I signed with the Hamilton Tiger Cats of the Canadian Football League in Ontario, Canada, earning CFL all-star honors in 1959. That year we played in the Eastern Division against Winnipeg and lost. In the 1960 season, we had great expectations, but lost 10 of 11 games. Players were leaving and new ones were coming all the time. I was released. In 1962 I joined the Dallas Texans Pro Football Team in the newly organized American Football League Lamar Hunt, a Texas millionaire, had organized the new Football League in 1959 in Dallas. He then put together a football team and called it the Dallas Texans of which I was glad to be on the team.”

Wood was referring to the newly born American Football League. Texas oilman H. L. Hunt's son and heir, Lamar Hunt, wanted to bring professional football to Texas. He was rebuffed in his efforts to establish an NFL franchise there, and in 1959, decided to form a new professional football league, which he called the American Football League. The AFL stocked its teams in two ways: signing "draftees" from the previous year's college graduates and signing "free agents.” Another source was the Canadian Football League. Many players not drafted or signed out of college by the NFL in the late nineteen-fifties went North to try their luck with the CFL, and later returned to the states to play in the American Football League. Thus, in 1960 Texas now had two teams- the Dallas Texans, and the Houston Oilers. Hunt tried unsuccessfully to get both University of Oklahoma Coach Bud Wilkinson and later legendary Dallas Cowboy Coach Tom Landry to be his Dallas Texans coach. But he was successful in getting Duane Wood to leave Canada and become a Texan.

In 1962 a real Texas showdown occurred when the Texans faced the Oilers and the Texans won the first championship for the young and under-rated American Football League. The Texans did not have too long to enjoy their victory. The following year, 1963, Kansas City was interested in a franchise and put together an offer that Lamar Hunt couldn’t resist. But what to call the new Kansas City team, the Texans just wouldn’t work.

H. Roe Bartle, who became the Mayor of Kansas City in 1955 following many years as a Scout Executive with the Boy Scouts of America learned on a business trip that Hunt was thinking about relocating his American Football League franchise. Not yet ready to sever his football ties in Texas, Hunt originally declined the mayor’s invitation to check out Kansas City.

But when Hunt finally checked out Kansas City Bartle did a remarkable selling job on Hunt, and had it not been for his persuasiveness Hunt unquestionably would have taken his team elsewhere. First in St. Joseph and later in Kansas City, Bartle created the Scouts’ Tribe of Mic-O-Say honor society. It would grow by thousands, instilling life lessons in youngsters who later became some of the region’s most successful business leaders Bartle acquired his nickname “the Chief” through his many years as a Boy Scout executive. When Hunt moved his Dallas Texans team to Kansas City in 1963, “Chiefs” popped up time and again in a name-the-team contest. Hunt’s general manager Jack Steadman said years later: “I finally told Lamar, ‘There’s just no other name we can select.”

During Duane Wood’s five seasons with the Texans/Chiefs, he had 20 interceptions with 247 return yards and one touchdown. It was in his first season playing in Kansas City that Wood would be named to his only AFL All-Star Game. After playing the 1964 season for the Chiefs, Wood moved on to play in the Canadian Football League this time with the Edmonton Eskimos. He played one season there and retired again in 1965. Wood returned to Wilburton and entered private businesses including the B&H Clothing Store, the Bowling Alley, and Duane's Recreation & Pool Hall. In 1973 Duane was hired as office manager of Kiamichi Electric Cooperative and was soon named assistant manager. In 1987 he was named general manager and held that position until he retired in 1999 after 26 years of service to Kiamichi Electric.

A couple of final wrap-up items. For one season in 1952 there was another Dallas Texans team in the National Football League, but it was not the same American Football League Dallas Texans team that became and remains the Kansas City Chiefs. In 1970 the AFL merged with the NFL. In 1996 the Houston Oilers became the Tennessee Titans. And finally, in 2002 a new NFL expansion team arrived in Houston called The Texans.

Also, important to remind that the Kansas City Chiefs play in Missouri. Not Kansas!