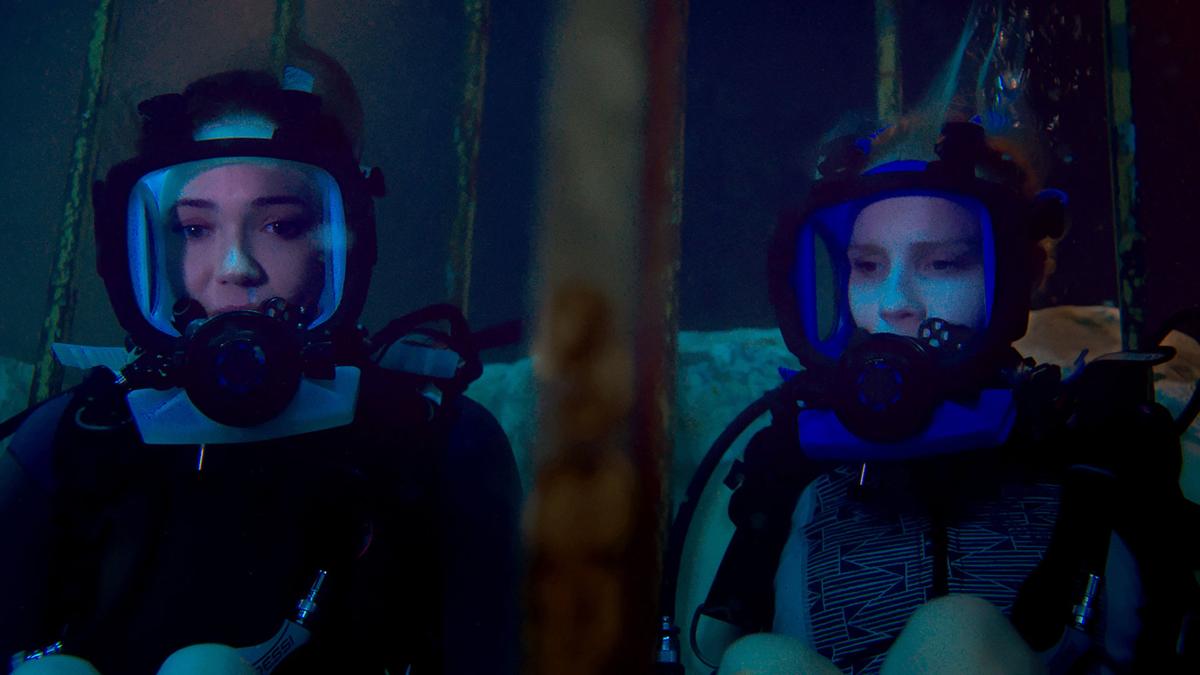 Lisa, played by Mandy Moore, and Kate, played by Claire Holt, are stuck at the bottom of the ocean floor after their shark-diving excursion goes terribly wrong in "47 Meters Down." (Entertainment Studios Motion Pictures) 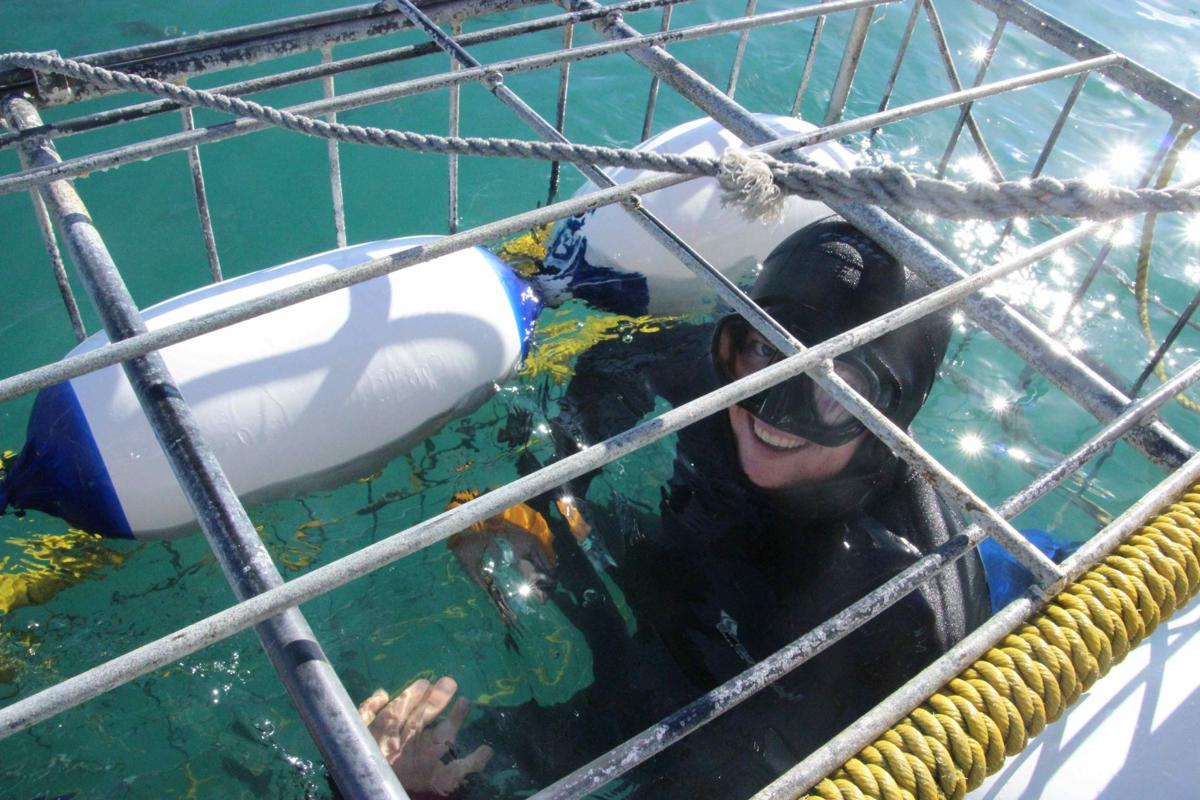 The Reel Dish author David Dishman goes cage diving off the coast of South Africa in 2014. 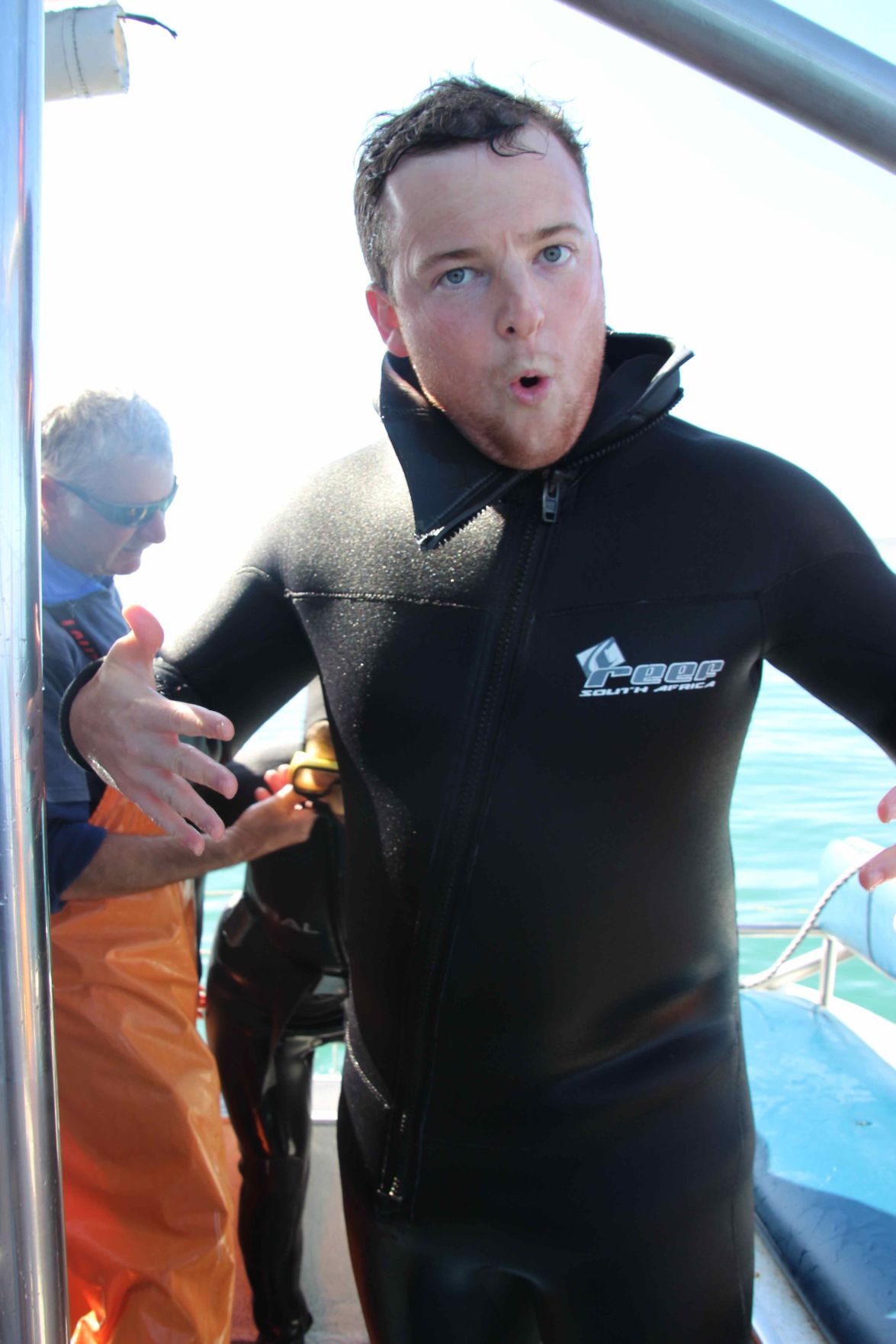 The Reel Dish author David Dishman emerges from a cage after shark diving off the coast of South Africa in 2014.

“47 Meters Down” swims onto big screens everywhere and plays with everyone’s fear of sharks — this time from under water.

Forget the frantic beach scenes in “Jaws.” Forget the super-smart sharks in “Deep Blue Sea.” You need to even forget about poor Blake Lively in “The Shallows” from last summer. “47 Meters Down” is all about fighting for survival while stuck roughly 150 feet under in shark-infested waters. There are no boats, there are no rocks and there is no dry land.

It’s an interesting premise for a horror genre that seemingly has seen it all. Mandy Moore and Claire Holt play the roles of Lisa and Kate, respectively, who find themselves trapped in a shark cage on the ocean floor after the wench holding them up breaks on the boat. It’s a Murphy’s Law-type of film as everything that can go wrong from that point on does. Lisa and Kate are sisters who must exhaust every option of survival if they have any chance of escaping the sharks.

But that’s not all!

Since they are trapped so deep below the surface they can’t simply swim to the surface like frantic dolphins, or they face the deadly prospect of getting “the bends” which can cause death, according to their sea captain. So they wait for help from the Coast Guard.

Now an astute observer would ask, “But Dish, how did they know what the sea captain was saying about ‘the bends?’ And that the Coast Guard was en route? Surely the captain didn’t anticipate them falling 47 meters below water with no way of retrieval, right?”

And I would tell you those are very bright questions to ask, and questions we as viewers are apparently supposed to gloss over. Despite owning an old boat with a rickety and worthless wench and cable system, this shark-diving captain owned some high-tech scuba equipment complete with microphones in the masks to communicate. Fall down 150 feet in the water? No problem, the ol’ captain of the rusty boat will just talk to you on the microphone.

He’ll tell you all about the Coast Guard coming and the bends and everything else you need to know to ensure you stay down in the cage for the duration of the movie— er, I mean until the rescue is complete.

Despite the eye-rolling predictability of the plot and the hokey disasters that occur — “47 Meters Down” provides adequate suspense for an entertaining summer horror film. There are more than a few times audiences will jump in their chairs, the arm rests will get gripped tightly a few times and people will think twice before jumping in a shark cage.

I personally did jump in a shark cage one time off the coast of South Africa. I was traveling and working there and had the opportunity to go out shark diving with a man who’d filmed with the Discovery Channel for its annual “Shark Week” coverage. I didn’t think about it much, just wet-suited up, grabbed a mask and snorkel and jumped in chum-filled water with only a cage separating me from Great White sharks.

Unlike the movies, chum-filled water has little visibility and sharks blend very well with grayish-blue waters. The man serving as captain on our boat tossed a seal-shaped foam cutout and skimmed it along the surface of the water as added bait for the very real, and very terrifying water monsters. Those of us held our breath and swam to the bottom of the cage and peered out into the abyss.

And then they came.

I shrieked like a child in half awe-inspired giddiness and half terror. I watched as sharks took several passes near our cage and I stared into the blank eyes that would have had no problems shredding me to pieces if it weren’t for that cage. They’re fast in the water, their teeth are as big as they look on TV and there is NOTHING you could do to stop them in open water.

Imagining that cage I swam in suddenly falling to the bottom of the ocean — with me inside — and sharks all around is a truly terrifying concept, however unlikely. Watching it play out in a movie with sharks that are ridiculously huge makes things a little less believable, but the fear is enough to have fun with for a couple hours. If you’re looking for some fun fear this week, “47 Meters Down” is a fun one to see.

And be careful if you have a beach vacation planned this summer. The sharks are everywhere.