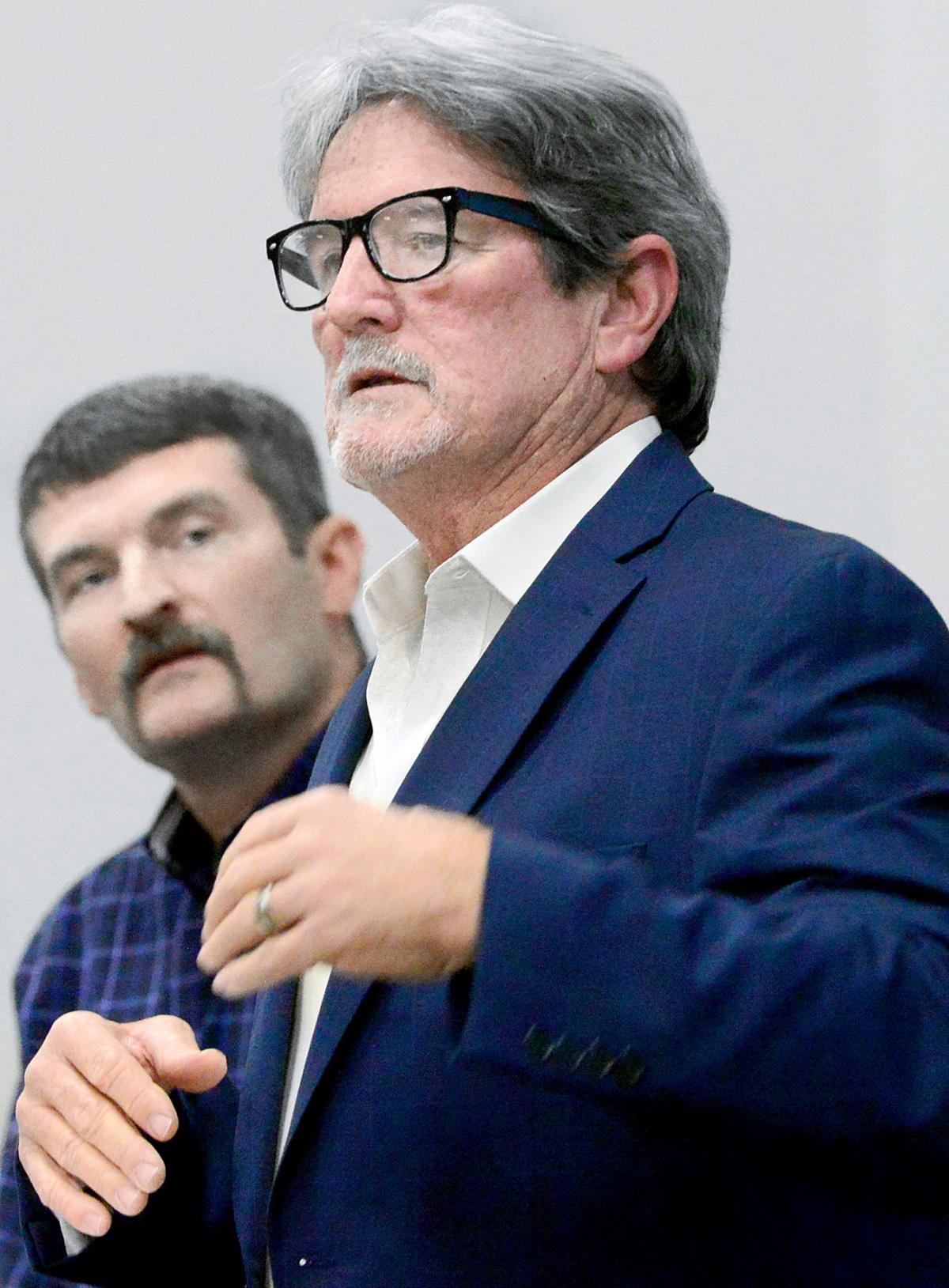 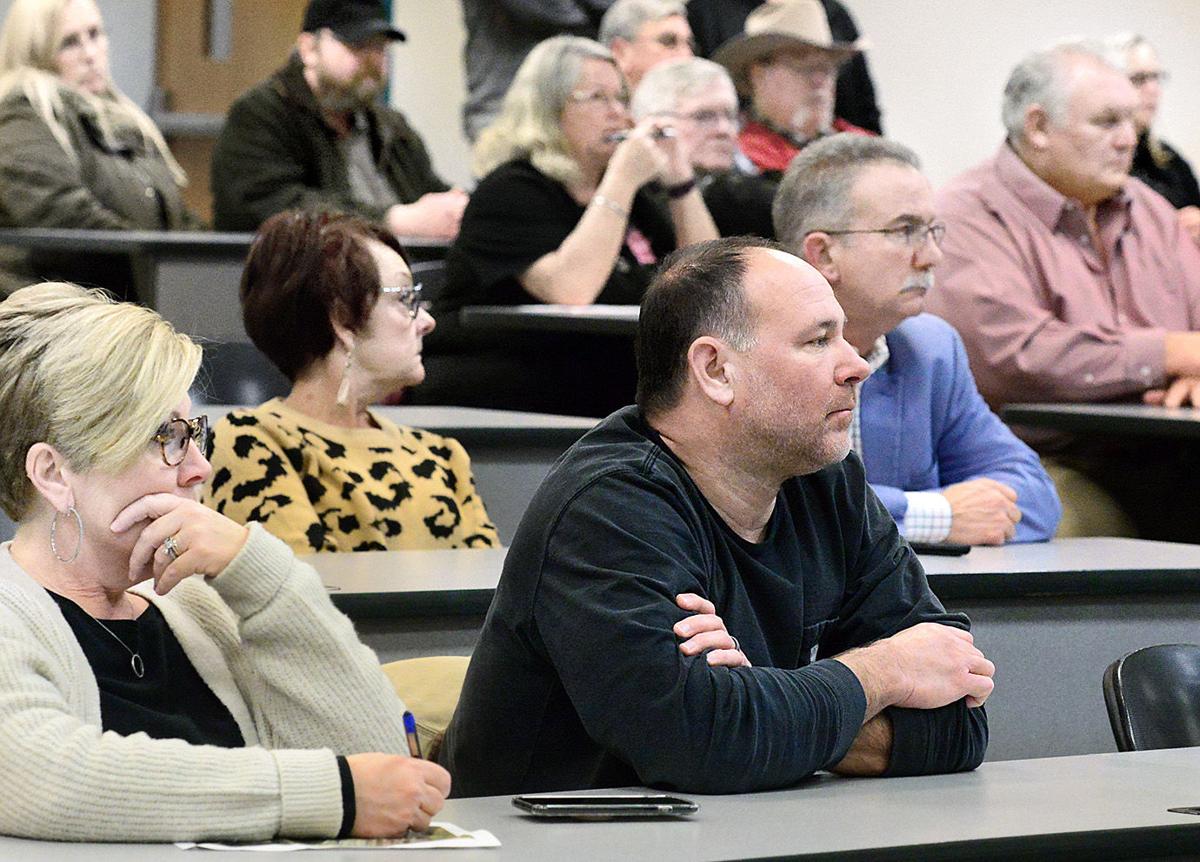 Pictured from left, Cindy Basolo and her husband Pat Basolo, listen during the Town Hall Meeting at the Eastern Oklahoma State College McAlester Campus, about the intersection problems on U.S. 69.

Pictured from left, Cindy Basolo and her husband Pat Basolo, listen during the Town Hall Meeting at the Eastern Oklahoma State College McAlester Campus, about the intersection problems on U.S. 69.

Oklahoma Department of Transportation personnel came to McAlester on Thursday night to get public input in regard to a dangerous intersection along U.S. Highway 69 — and the public had plenty of input to offer.

ODOT Division 2 Engineer Anthony Echelle told the estimated 150 individuals who attended that he was there to offer options about the dangerous intersection where Village Boulevard and frontage roads intersect with U.S. Highway 69, also known as the George Nigh Expressway where it wends through McAlester.

Echelle also offered an update on ODOT’s plans for Phase 2 of the Highway 69 project in McAlester — but most of the discussion concerned options regarding the Village Boulevard crossing.

McAlester Mayor John Browne opened the meeting by calling it one of the most dangerous intersections in McAlester and possibly, the entire state.

“Everybody wants the intersection to be much safer,” Browne said. “To do that, you’re going to be trading off some convenience.”

At the crossing, drivers heading east or west often try to zip across all four lanes of northbound and westbound traffic on the highway — but many times the drivers find themselves stranded on a small area separating the main highway traffic. They then have to wait until the traffic lets up to try and make it the rest of the way across.

However, other drivers are also pulling on or off the highway, which is also in close proximity to Peaceable Road, making the situation even more confusing.

During the meeting, Echelle offered several options — which brought various levels of reaction.

The first option consisted of placing a yellow barrier across the strip of “no man’s land” — which would physically block drivers from crossing the highway from east-to-west — similar to the barriers that prevent drivers from crossing parts of Carl Albert Parkway from the east-to-the west in downtown McAlester.

A couple of other options brought laughter from some of the public who reacted to how far out of their way they would have to drive to get from one side of the highway to the other. Both were in the 1.8 mile range. One suggestion was that people leaving Peaceable Road head north on the highway frontage road, circle under the bridge at Wade Watts Avenue and then head south on either the frontage road or the highway.

“That option is a viable option,” Echelle said. “The distance is 1.8 miles,” he said. By driving 30 mph, it should take 3 and 1/2 minutes to get from the east side to the west side of the highway, he said.

A man from the audience shouted his response: “No way!”

Citizens also cited concerns regarding how the physical barrier would impact fire and emergency vehicles from the city’s fire station on Village Boulevard. City Manager Pete Stasiak said the city has fire stations at other locations around the city.

Another suggestion was to cross the highway from east-to-west at the Fourteenth Street intersection — which presents its own series of challenges.

Echelle said crossing the highway will be much safer when a bridge is eventually constructed that will allow unrestricted U-turns beneath it. That’s in the Phase 2 portion of the project plan.

In the meantime though, Echelle said ODOT and the city of McAlester want to do what they can to make the situation safer.

“This is an intersection with challenges — definitely,” he said. He also referred to something the mayor said, using the analogy of a head on a swivel to describe how drivers who try to cross the intersection have to constantly look back and forth to try and avoid being hit be oncoming traffic.

“When you’re approaching that intersection, there are cars coming from everywhere,” Echelle noted.

Those attending offered a number of stories about things they’ve seen or experienced at the intersection.

Another man didn’t like the idea of a barrier at the intersection.

“How will I get to my house in Kinkead Hills if you do that?” he asked.

Several of those attending the meeting said simply adding signs, striping and expanding the areas where vehicles can turn would make a big difference. One man, Ben Smith, even got up and walked over to a huge screen with a Google Earth shot of the area being discussed and pointed out his ideas.

Another suggestion was to place a traffic signal at the intersection — even if only on a temporary basis.

Echelle said none of the options have been decided — and it’s possible the intersection could remain as it is, if that’s what the city and the people want.

After the meeting, the News-Capital asked Echelle what’s next.

“We’re going to catch our breath and discuss the feedback the city received,” Echelle said. Ultimately, the feedback will be reviewed and a decision reached, he said.

ODOT has previously said those plans for Phase 2 of the highway project include:

• Reconstruction of U.S. Highway 69 from Peaceable Road to Kinkead Road.

• Construction of an interchange on Kinkead Road.

• Construction of both northbound and southbound frontage, or service, roads.

• Construction of on and off ramps from U.S. Highway 69 to frontage roads near Wade Watts Avenue.

• Building of a J-turn on U.S. Highway 69 to the frontage road between Peaceable Road and Kinkead Road.

• Removal of the traffic lights and Comanche Avenue and Peaceable Road — and closing direct access to those roads rom the highway.

• Construction of a complete overlay and re-striping of the frontage roads, or service roads, from Kinkead Road to Peaceable Road.

James Beaty is senior editor at the McAlester News-Capital