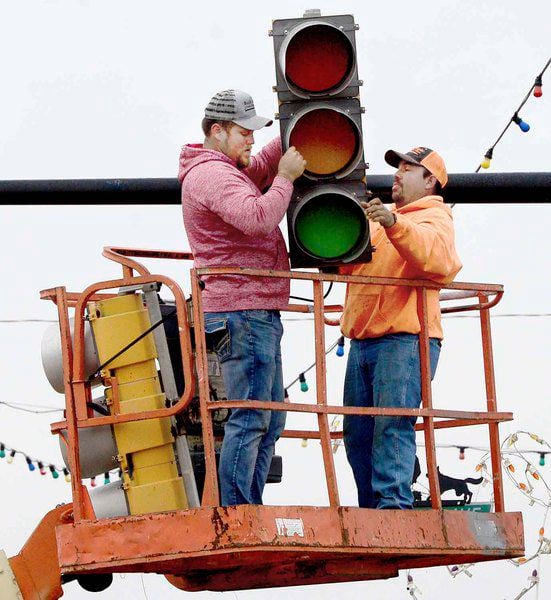 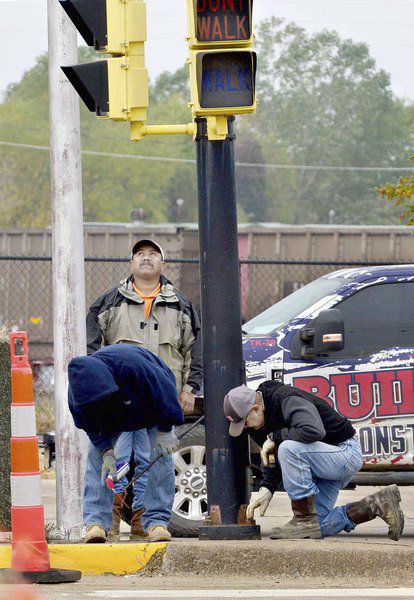 Permanently removing the electronic stop lights at the intersection of South Main Street and Choctaw Avenue and replacing the traffic signals with four-way stop signs is a "go" for the city of McAlester.

Built Right Construction began working Wednesday to remove the traffic signals on behalf of the city.

Before the traffic lights could be removed, the city had to obtain permission from the Oklahoma Department of Transportation. The city needed ODOT's permission because South Main Street is part of U.S. Highway 69's business route. It's under state control, since ODOT takes care of maintaining the federal highway.

Four-way stop signs were set at the intersection during the summer as Built Right Construction began work on the Downtown Streetscape Project, which extended along both sides of Choctaw Avenue from South Main Street to Second Street.

As work on the Streetscape project progressed, city personnel were paying attention to the four way stop at the  Main and Choctaw intersection.

McAlester City Manager Pete Stasiak said they quickly realized that traffic was moving through the intersection more smoothly — "especially when coming off Choctaw Avenue and making a right or left turn."

Observing the traffic flow, city representatives got in touch with ODOT to discuss the feasibility of making the changes permanent.

"We had several conversations with them," Stasiak said, followed up with a formal request to allow the city to permanently remove the traffic signals at the downtown intersection.

Although stop signs are currently in place at the site, Stasiak has something else in mind.

"We're trying to design a rock monument that would have four stop signs in the middle of the intersection," Stasiak said. He said he's seen something similar used effectively in other municipalities. However, the city has been unable to locate the type of rock monument the city manager is seeking.

"We may have to build our own," said Stasiak.

James Beaty is senior editor at the McAlester News-Capital