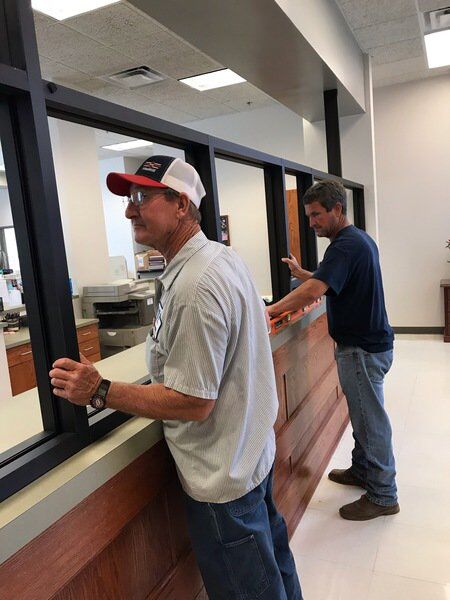 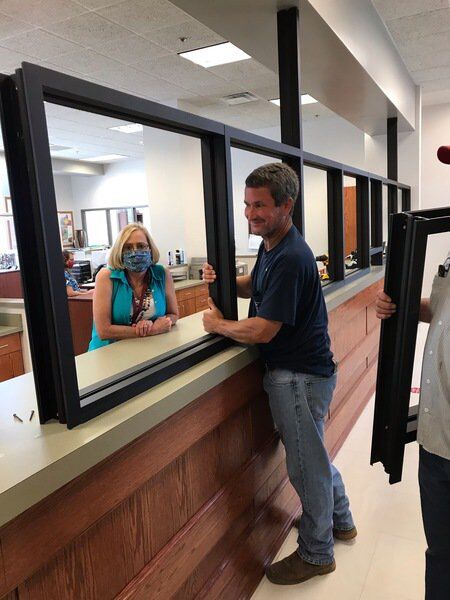 While employees in the offices will still stand almost face-to-face with customers or clients who come in to conduct business, they will now be separated by sheets of tempered glass. Installation of the new barriers is to help stop the spread of COVID-19.

Lester Sennett and Philip Brock, of Miller Glass Co., are installing the protective barriers in Trammell's office, which will be three-feet high. The two were placing aluminum frames first, to be followed with the tempered glass installation when the order arrived.

The new protective barriers in the county clerk's office will extend all the way around the customer service counter, beginning on the west side and then curving around  to the north.

"It will be safer for everyone," Trammell said.

She accepted a bid of $2,830 from Miller Glass for the project.

Monica Sennett, who is third deputy in the county clerk's office, is glad to see the protective barriers going up.

"I think they're awesome," she said. "I think it will help the public and us as well."

Brock and Lester Sennett said they've been installing plenty of the barriers lately, and not just in  McAlester. They've gone as far as Broken Bow and Idabel.

Trammell said the barriers will  protect not only workers in the county clerk's office, but members of the public as well. If any of her workers happened to be asymptomatic, she wouldn't want them to spread it to the public.

Installation of the barriers will require some reorganization of the county clerk's office.

"It's going to take some getting used to," Trammell said.

In the court clerk's office, work is nearly complete. Those barriers consist of wooden frames and tempered glass.

The frames were up, but a couple more sheets of tempered glass needed to be installed as of Thursday afternoon for the court clerk's project to be complete.

"They look wonderful," said Court Clerk First Deputy Tracy Brock. "We've got a lot of compliments on them."

Ledford met with Pittsburg County commissioners on May 26 to request the purchase and installation of glass and wood partitions on the front counter of the court clerk's office.

They voted unanimously to accept the low bid of $3,465 from Jeremy Thomas Construction for the project.

County commissioners plan to seek reimbursement from the state for installation of the protective barriers in both offices.