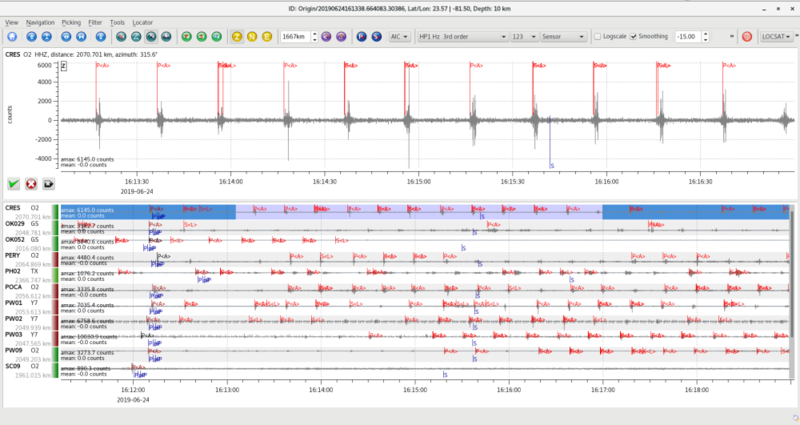 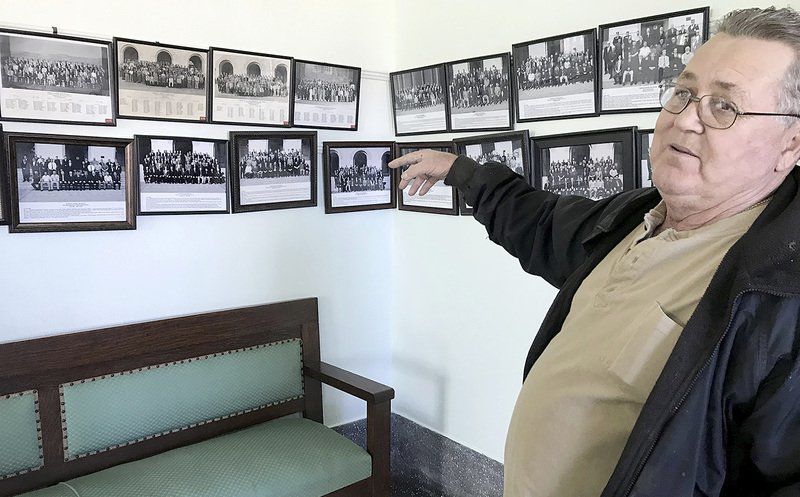 KEVIN HARVISON | Staff photoMcAlester Scottish Rite Masonic Center building superintendent Clem Peppers shows how the numerous picture frames on the wall lean against each other after being moved almost daily by munition demolitions at the McAlester Army Ammunition Plant.

KEVIN HARVISON | Staff photoMcAlester Scottish Rite Masonic Center building superintendent Clem Peppers shows how the numerous picture frames on the wall lean against each other after being moved almost daily by munition demolitions at the McAlester Army Ammunition Plant.

Clem Peppers knows it would be pointless to straighten up the hundreds of photos hanging up inside the McAlester Scottish Rite Masonic Center.

The building superintendent said larger frames are more secured to walls, but smaller frames stay crooked because of the almost daily shaking from open detonations at the McAlester Army Ammunition Plant south of the city — which are so powerful that the discharges recently registered on the state’s seismic activity.

“You can come in here and straighten and in two weeks’ time they will be right back like the way it was before,” Peppers said. “It’s kind of a job security if you go around and do this all day.”

The main part of the 140-feet tall Masonic Center was constructed in 1907 and has undergone several renovations — and Peppers said the building needs repairs from damage caused in part from the detonations that brought questions among the state’s researchers.

In June, a mysterious reading on the Oklahoma State Geological Survey’s real-time data display of seismic activity in Oklahoma caught the attention of Dr. Jacob Walter.

“What the heck is that?” is what Walter remembered saying when he happened to walk by the display in June.

The mysterious reading was dubbed as “the anomaly” by the OGS in a blog post on the agency’s website.

Walter explained that earthquakes will typically appear as “little tick marks” on the display and how the seismic energy can be seen moving in and out from data recorded from seismometers located across the state.

“We have a pretty good idea on what that looks like,” said Walter.

The state seismologist said the data that caught his attention was “odd” because it was showing up simultaneously on several seismic monitoring stations across the state.

“It was a different nature relative to what the earthquakes typically look like,” said Walter.

Scientists immediately began to think of possible sources of the mysterious reading since it was immediately recognized as not being of seismic nature due to the repeated intervals it occurred.

“It was almost kind of like a heartbeat,” said Walter.

OGS Research Scientist Andrew Thiel wrote in the agency’s newsletter that “additional evidence that our seismic network was detecting something real came from the Oklahoma Corporation Commission (OCC), in the form of reports from citizens around the state who were hearing unexplained noises around 11:11 a.m. These noises were described as “bumps” or “mini explosions.”

Sarah Terry-Cobo, a spokesperson with the OCC, said the agency received six complaints over a three-month period this year, including one where the complainer said it sounded like quarry blasts.

Inspectors first believed the noises heard were the sound of pressure relief values from a nearby pipeline but after learning that no work was being done on the pipeline, they too, were left puzzled.

In June, two inspectors were sent to a residence in Tuttle to see if they could hear the “mini explosions” being reported. The inspectors noted that they did not feel anything, but thought they could hear two to three “faint noises” that were seconds apart and ruled that the sounds were not oilfield related.

After going public with the “anomaly,” the OGS began looking at the possibility of the source being from the munition disposal at the McAlester Army Ammunition Plant located south of McAlester. Along with destroying obsolete or un-serviceable munitions, McAAP produces munitions for the U.S. Department of Defense and stores close to one-third of the DoD’s munitions stockpile, according to the U.S. Army.

According to the U.S. Army Joint Munitions Command, McAAP is one of 10 JMC sites across the United States that has an open burn/open detonation permit through the U.S. Environmental Protection Agency. The plant also holds a Part B permit for hazardous waste operations through the Oklahoma Department of Environmental Quality.

Open detonations at McAAP begin around 11 a.m. Monday though Saturdays and are widely felt across the McAlester area.

Walter said he remembered prior talks with residents from the McAlester area asking him if the explosions from McAAP were picked up by the OGS’ seismic monitoring network.

He said that surface explosions, like the ones that occur at the base, are not going to generate a whole lot of seismic energy.

Walter said scientists found that the speed of the waves moving across the state was consistent with the speed of sound in air, 767 mph.

“We identified that the signals were actually being propagated in the air and then were hitting the ground,” said Walter. “So they were bouncing off maybe the thermosphere, or one of these layers in the upper atmosphere and then coming back down and hitting the ground and coupling into a signal that was detectable by our seismometers.”

According to Walter, humans would not be typically able to hear the sound since the waves have been coupled to the ground across the central part of the state.

Walter said scientists plan on going back and analyzing data to see if the sound waves from McAAP have always been detected by the agency’s equipment, but the data they have does show variabilities from day to day.

“It’s actually kind of interesting,” said Walter. “Certain days there will be less visibility and we don’t know if that is dependent on the types of ordinances being disposed of or the amount, or whether that’s due to different atmospheric conditions.”

He said they have received some information from McAAP that will help the agency better analyze the data.

A request for more information regarding the munition disposal process at McAAP was not answered.

Theil wrote in his post that the agency intends to publish its findings concerning the long distance conveyance of acoustic energy and that the large number of stations that detected the signal and the years of continuance data “has excellent potential to offer significant insight into how acoustic energy travels though the atmosphere.”

After learning that the sounds being heard in the Oklahoma City area were from McAAP, Terry-Cobo said the agency will now tell future complainers that the sound they are hearing could be from McAlester.

“This is a really fascinating phenomenon,” said Terry-Cobo.

Ludie Karr, 87, of Haileyville, passed away on Tuesday, January 21, 2020, at Walnut Grove Living Center. Family will receive friends on Thursday from 6 p.m. to 7 p.m. at Brumley-Mills Funeral Home in McAlester. Graveside services will be at 1 p.m. on Friday, January 24, at Elmwood Cemetery P…

John Arthur Gaustad, 94, of Wilburton, passed away on Saturday, January 18, 2020, at his home. Services will be today, January 22, at 10 a.m. at Waldrop Chapel. Burial will be at Lutie Cemetery in Wilburton. Officiating will be the Rev. Randy Waldrop. Services are under the direction of Wald…

Shela Kay Lanford, 66, of McAlester, passed away on Saturday, January 18, 2020. Funeral services are today at 2 p.m. at Apostolics of McAles-ter Church.