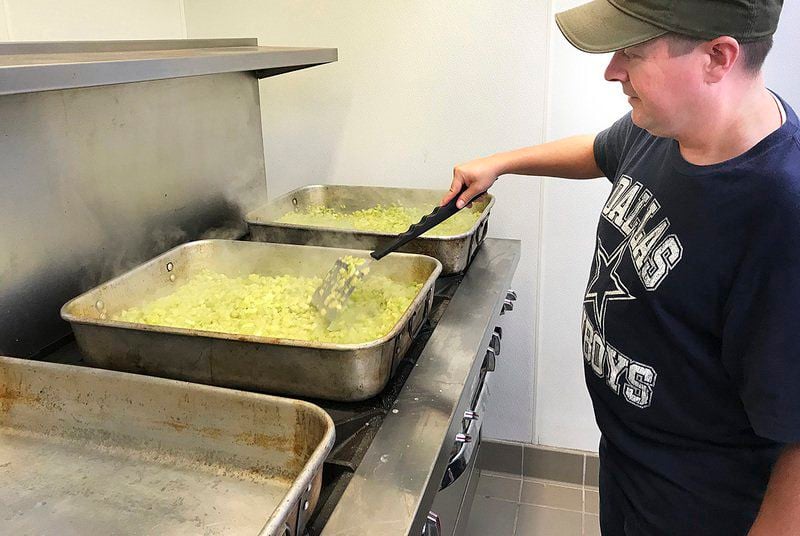 KEVIN HARVISON | Staff photoVolunteer John Graham sautés an onion and celery mixture Tuesday to be used as an ingredient in dressing served during the 34th Annual Community Thanksgiving Dinner, set for Thursday, Thanksgiving Day, at the Pittsburg County Office of Emergency Management in  McAlester. 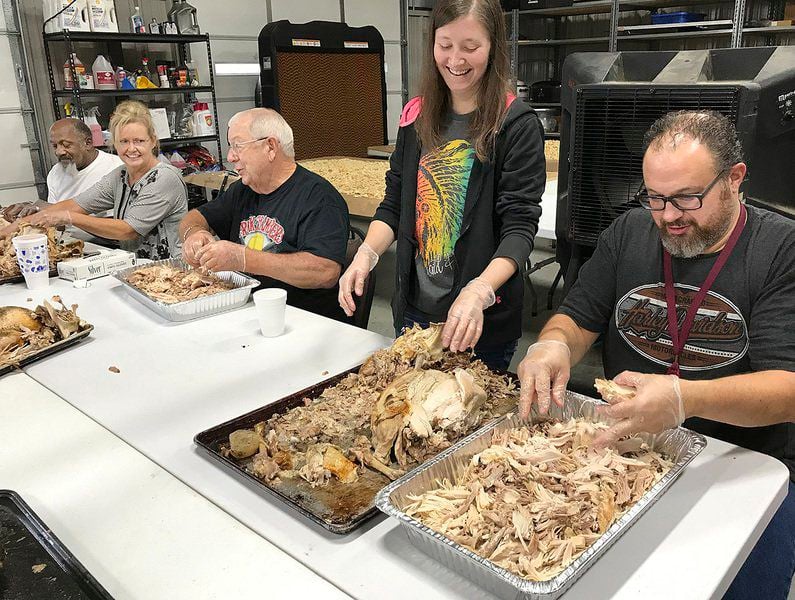 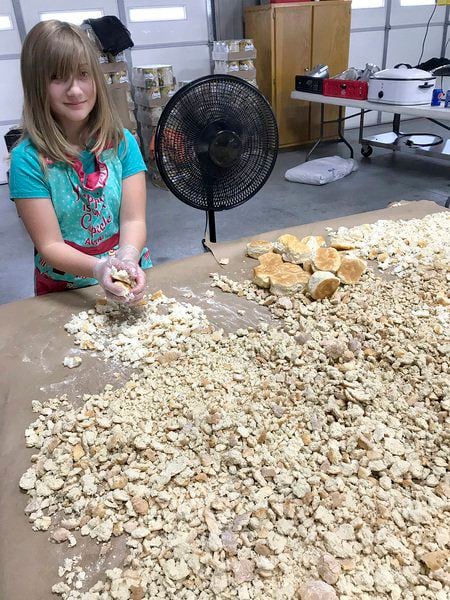 KEVIN HARVISON | Staff photoVolunteer John Graham sautés an onion and celery mixture Tuesday to be used as an ingredient in dressing served during the 34th Annual Community Thanksgiving Dinner, set for Thursday, Thanksgiving Day, at the Pittsburg County Office of Emergency Management in  McAlester.

Volunteers preparing the 34th Annual Community Thanksgiving Dinner say they have 50 turkeys cooked and ready for the holiday event — and it's going to be served, rain or shine.

Although there's a 100% chance of rain in the McAlester forecast for Thursday, volunteers helping prepare the holiday are not about to let that dampen their spirits for the Thanksgiving Day event.

"It's going to come off good," said Jim Kelley, one of the organizers of the annual community dinner, which will be served inside the Pittsburg County Office of Emergency Management at 701 EOC Dr.

While the sit-down dinner will be served inside the Emergency Management Office, many more meals will be delivered  to those who are shut-in over the holiday or who have made advance arrangements to pick up meals to take home.

"We're a little worried about the rain," Kelley said, in reference to those making deliveries or picking up carryouts. "If need be, we'll set a tent up."

Organizers were counting on volunteers to show up at the Emergency Management Center on Thursday morning to make deliveries, even if it is raining.

"We've had rain before," said Kelley, referring to the weather during previous Community Thanksgiving Dinners.

Anyone who had not yet signed up to participate but who would like to do so had until the deadline of noon Wednesday to phone 918-423-7785 and make a reservation.

Once again, the Pittsburg County Community Thanksgiving Dinner is offered free to anyone in the who wants to participate, with no age or income guidelines in place.

Plans call for the earliest to deliveries to begin in rural areas of the county by around 9 a.m. on Thursday, Thanksgiving Day, with those in the city starting at approximately 10 a.m.

Pickups for carryout meals that have been scheduled in advance are set to begin around 11 a.m., with the sit-down dinner at the Emergency Management Office set for noon.  For those not familiar with the location of the Emergency Management Office or with 701 EOC Dr., it's off West Street, between Electric Avenue and the Pittsburg County Animal Shelter.

Volunteers were busy Tuesday deboning the 50 turkeys that are going into the dressing being prepared for the event. They included Pittsburg County Animal Shelter Director Michele Van Pelt, who was sure to be popular with the dogs at the animal shelter when she returned, since the aroma of cooked turkey hang strong in the air.

Also on the menu for the Thanksgiving Dinner are mashed potatoes and gravy, green beans, cranberry sauce, a roll, a soft drink and dessert.

Frink-Chambers Schools helped out this year by loaning some cafeteria space to the volunteers, who have had a problem with slicing the amount of onions needed ever since the onion-slicer they'd been using broke down.

Charlene Spears, another volunteer, said preparations were going well. David Spillman, who's helped with 33 of the annual Community Thanksgiving Dinners, stayed busy delivering eggs, helping cook turkeys, and doing whatever else was needed.

Meanwhile, Kelley many other volunteers continued to get ready for the event, including a number of county officials and members of their staff. Organizers are keeping the faith volunteers will show up to help with deliveries, even if it is raining Thanksgiving Day. That's what volunteers have done during previous Thanksgivings when there's been rainy weather.

"The volunteers got wet, but they kept coming," said Kelley.