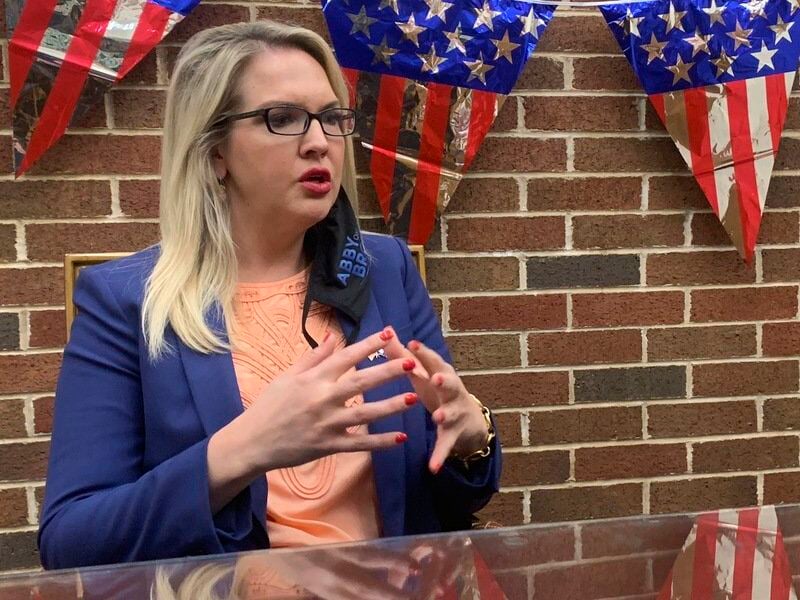 Democrat U.S. Senate candidate Abby Broyles responds to questions during a socially-distanced interview prior to a fundraising event for McAlester and Krebs. 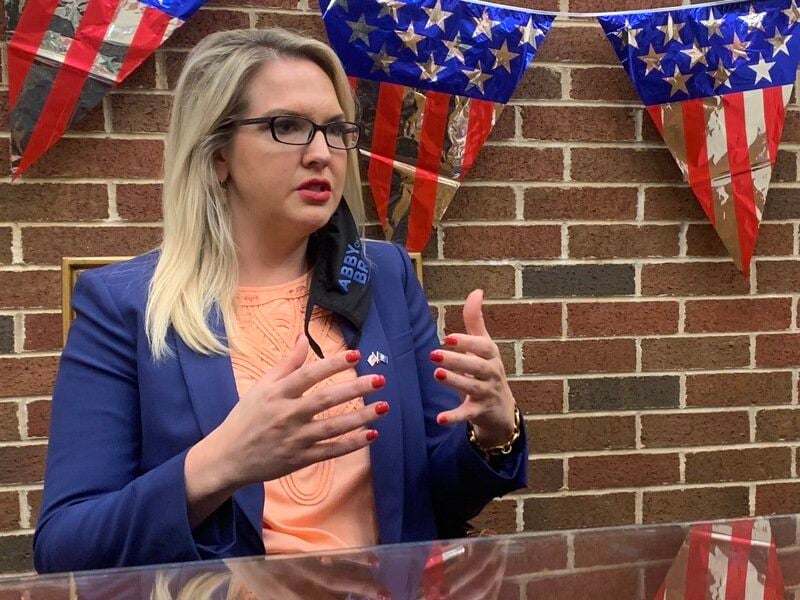 U.S. Senate Democrat candidate Abby Broyles talks about the issues during a socially-distanced interview at the News-Capital.

Democrat U.S. Senate candidate Abby Broyles responds to questions during a socially-distanced interview prior to a fundraising event for McAlester and Krebs.

U.S. Senate Democrat candidate Abby Broyles talks about the issues during a socially-distanced interview at the News-Capital.

Abby Broyles says she will break with the Democratic Party on issues when she feels the need to do so.

Broyles, the Democratic candidate for the U.S. Senate seat held by Republican U.S. Sen. Jim Inhofe, of Tulsa, mentioned the Second Amendment to the Constitution as an example.

“I’m a supporter of the Second Amendment,” Broyles said. “This is where I break from my party. Gun ownership is a way of life,” she said, referring to states such as Oklahoma. “I never want to take away guns.”

That being said, Broyles said there are what she called some “common sense” things that could be done where gun laws are concerned. She said there’s a bill on the table calling for background checks on gun purchases.

But background checks are already in place, aren’t they?

“I don’t think that’s a radical idea,” she said. “I don’t want criminals that are violent with a gun in their hand.”

Broyles, who was in McAlester for a fundraiser at Pete’s Place in Krebs, stopped by the News-Capital prior to the event. In a wide-ranging interview, she touched on everything from the current controversy regarding President Trump moving forward with a Supreme Court nominee to riots in the streets in other parts of the nation.

What’s her take on President Trump’s determination to replace the U.S. Supreme Court seat left vacant by the death of Ruth Bader Ginsburg?

“I agree with what Senator Inhofe said in 2016,” Broyles said. “The Senate should not confirm a Supreme Court nominee during a presidential election year.”

What does she think about the threat by Democrat U.S. House Speaker Nancy Pelosi to possibly impeach President Trump again along with U.S. Attorney General Bill Barr in an effort to slow down or stop the Supreme Court appointment confirmation process?

“There are a lot of things Speaker Pelosi and I don’t agree on,” she said.

Regarding the bitter divide between two major parties, Broyles said “I think both parties are at fault for playing political games. Partisan gridlock on both sides can’t get change in Washington.”

Broyles said she will reach across the aisle to work with members of the Republican Party.

A former award-winning television journalist in Oklahoma City, Broyles is now an attorney. This marks her first political race.

She and Inhofe will square off in the Nov. 3 General Election. Also on the Nov. 3 ballot for the U.S. Senate seat are Independent candidates Joan Farr and April Nesbitt, along with Libertarian candidate Robert Murphy.

Broyles is a Bethany High School graduate who went to work as a television reporter in Oklahoma City following her college graduation. She went on to earn a law degree and is now a practicing attorney in Oklahoma City.

What would Broyles do as senator to support the McAlester Army Ammunition Plant and other military bases in the state?

“Military bases are vital to Oklahoma,” Broyles said. “I want to make sure our voice is heard.”

Inhofe is chairman of the U.S. Senate Armed Services Committee, but Broyles said she would approach defense differently.

“I disagree with how he spends money,” Broyles said. She maintained Inhofe assists defense contractors, while she would put more resources in other areas, such as improvements in housing for members of the armed services and their families, with mold reported in some sites. It’s an issue Inhofe has also addressed, but Broyles said she would have acted faster.

She said she will be an advocate for rural Oklahoma.

“I would make rural Oklahoma a priority, not an afterthought,” she said. “Too many families cannot afford insurance.” Broyles also said she will support rural farmers, making sure they have access to the technology they need.

What about the  currentl movement in some of the nation’s cities to defund police?

“I absolutely do not support defunding the police departments,” Broyles said. She added that she thinks too much responsibility is placed on police officers.

“We set them up to fail,” she said. Part of the conversation is taking some responsibility out of law enforcement and directing more funding toward social services, she noted.

But would not some people consider that defunding the police? “What we’re doing now is putting more responsibility onto police departments,” she said.

What’s her stance on some other issues, such as abortion?

“In 2020, women are capable making their own decisions,” without any input from either Jim Inhofe or herself, Broyles said.

On the COVID-19 pandemic, Broyles said “We need to expand PPE funding.

“We’re still getting over a thousand cases a day in Oklahoma,” she noted.

Regarding education, Broyles said students in many school districts  don’t have the electronic tablets that can be utilized both for distance learning or onsite school classes.

She also wants to expand technological hot spots for districts that still don’t have broadband or other technological infrastructure that is needed.

Asked if she would support increasing the federal budget to pay for such improvements, Broyles said she’s not for increasing the deficit, but she does not think all  of the school districts are aware of the federal dollars that are already available in the form of grants.

“If I’m elected, I would have an education liaison,” Broyles said.

What about the ongoing social unrest in America’s streets in other parts of the nation?

“I don’t support violence in the streets,” Broyles said. “In Oklahoma, we’ve had peaceful protests.”

Regarding infrastructure, Broyles said now is the time for action.

Though Inhofe has a lead in the polls, Broyles is working to pick up momentum. She said she’s doing well in Oklahoma City and Tulsa, and now her goal is to branch out to other parts of the state, such as McAlester, Muskogee and Lawton.

“I think people in Oklahoma are ready for a change,” Broyles said.

Checkout this collection of stories from our election coverage.