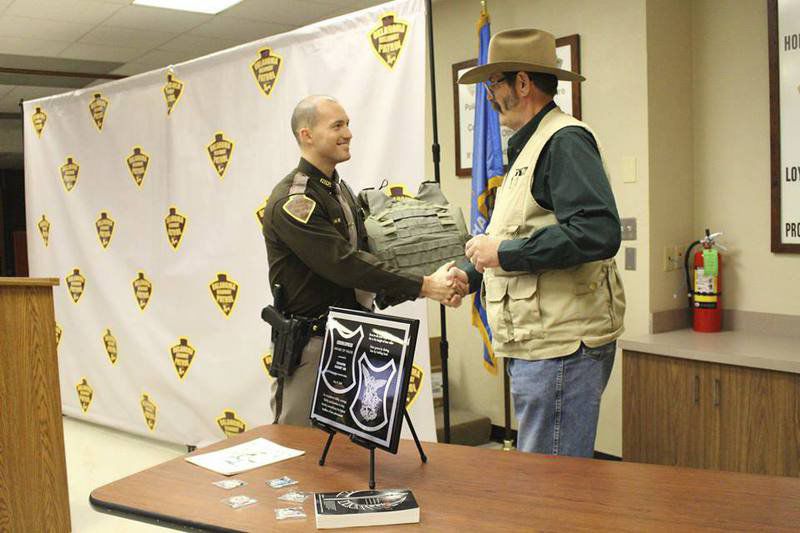 Oklahoma Highway Patrol Trooper Sammy Lee is shown shaking the hand of Mike Schoenberger after being presented a replacement bulletproof vest during a ceremony Thursday in Oklahoma City. 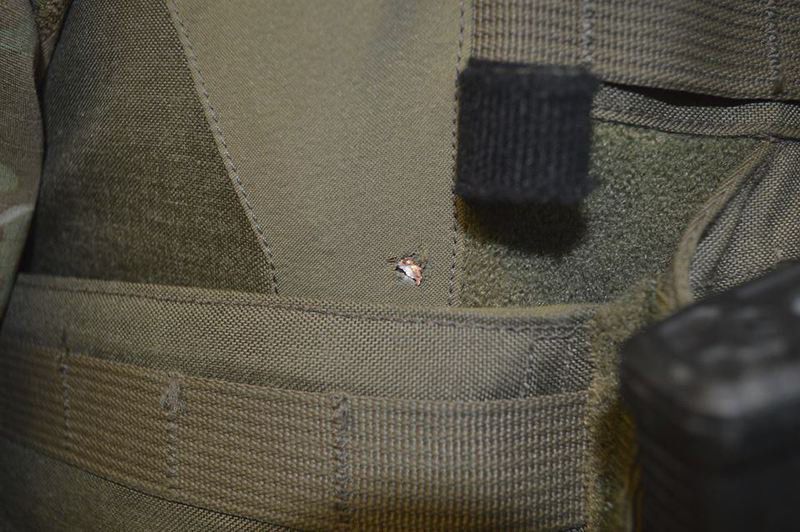 Shown is a bullet fragment that was found in Oklahoma Highway Patrol Trooper Sammy Lee's vest after a May 11 shootout in Talihina.

Oklahoma Highway Patrol Trooper Sammy Lee is shown shaking the hand of Mike Schoenberger after being presented a replacement bulletproof vest during a ceremony Thursday in Oklahoma City.

Shown is a bullet fragment that was found in Oklahoma Highway Patrol Trooper Sammy Lee's vest after a May 11 shootout in Talihina.

A member of the Oklahoma Highway Patrol's Tactical Team received a new bulletproof vest Thursday after the one he wore during a felony warrant service in May was damaged during a shootout in Talihina.

OHP Trooper Sammy Lee was presented with a new bulletproof vest during a ceremony at the Robert R. Lester Training Center in Oklahoma City. Lee's vest was struck by a bullet fragment in the front lower right torso, which protected him from what could have been a serious injury.

Six other troopers who were injured during the May 11 shootout in Talihina were also present for the ceremony.

“What made this different was the chaos of it,” said OHP Tactical Team Commander Tim Tipton. “The suspect had a fully-automatic and immediately began firing that fully-automatic weapon at our guys, as well as the fire.”

The team was called to assist the Talihina Police Department in the service of a felony warrant at the residence of 52-year-old Bradley Webster. A no-knock warrant was issued after investigators gathered information from a confidential source that Webster had in his possession an illegal fully-automatic weapon.

The search warrant affidavit claims that Webster told the informant he had the weapons “because he was not going back to jail and was ready to go on a shooting spree at City Hall.”

According to documents obtained by the News-Capital, after troopers breached the door, they deployed a diversionary device on a pole through a window and then extricated the device. An individual inside the residence – identified as Bradley Webster – began firing a weapon at the entry team, the affidavit states.

A fire inside of the building then spread and ultimately destroyed two historic buildings in downtown Talihina. Bradley’s body was later recovered by investigators inside of the fire-damaged residence next to a fully-automatic Uzi pistol and an AR-15 rifle along with a handgun.

Mike Schoenberger, a representative of Armor Express, the manufacture of Lee's previous vest, was present and presented Lee with the new bulletproof vest.

“We were proud to be able to provide you guys with your tactical body armor, but also more proud that you are here because of the actual performance of the vest.”

A plaque from the company was also presented to Lee “For exceptional ability, courage, fidelity, and devotion to duty. Thereby exemplifying the highest tradition of law enforcement.”

Lee then gave his recollection of what occurred during the May shootout.

“After the gunfire, we retreated back to a safe position,” Lee said.

Once the troopers were at the safe position, Lee said that is when the tactical medics looked the team over.

“I didn’t feel any injuries at the time,” Lee said. “So I wasn’t too concerned about it.”

The trooper said medics then conducted a secondary search and found the bullet lodged in his vest.

“I wasn’t even aware I’ve been hit,” the trooper said.

Lee said that it wasn’t all about him.

“I’m here today because of my team,” he said.

Troopers Stephens, Seward, Bunch, Tuttle, Ross, and Wesley were then asked to join Lee at the podium and each trooper briefly stated where they were that day and what injuries they received from bullet fragments, debris, and shrapnel.

Tipton said he has numerous prior military service guys on the team and that the Talihina incident made them feel like they were back overseas.

“For Talihina, Oklahoma, it was a really intense time,” Tipton said.