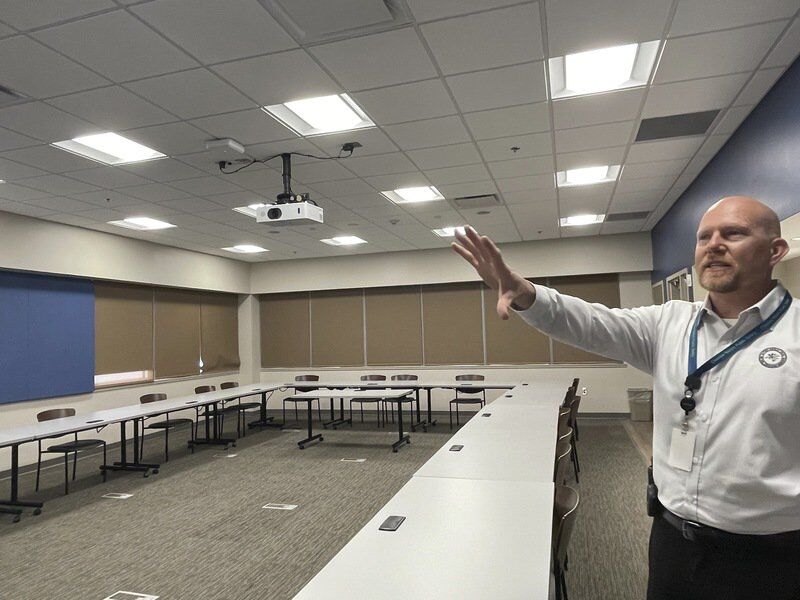 Choctaw Nation Executive Director of Public Safety John Hobbs shows off a training room inside the tribe's public safety office in Durant. The room features a projector that incorporates a program that allows officers to train in use-of-force scenarios. 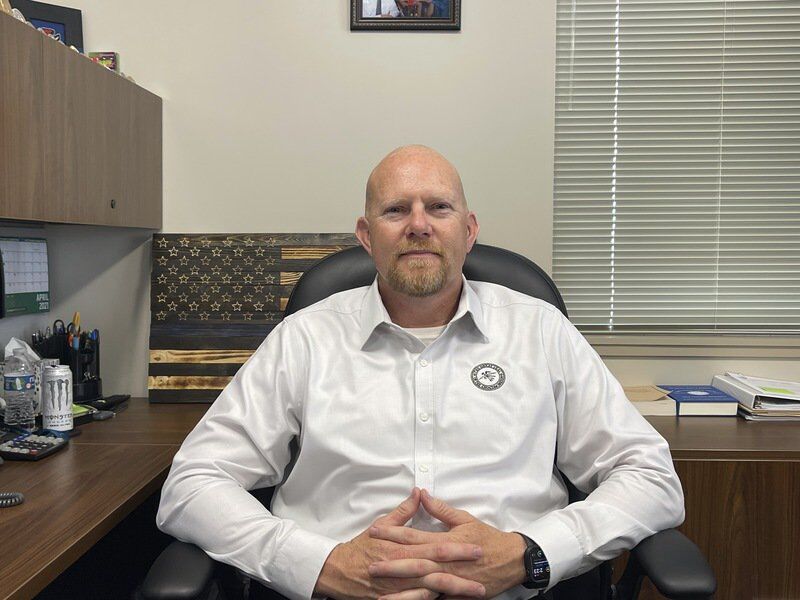 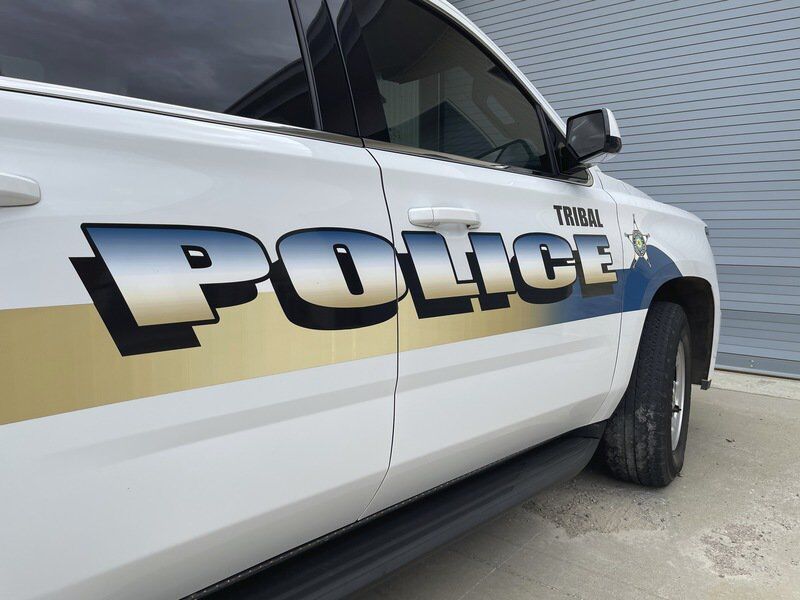 More than 50 Choctaw Nation Tribal Officers are currently "on the streets," according to Choctaw Nation Executive Director of Public Safety John Hobbs. 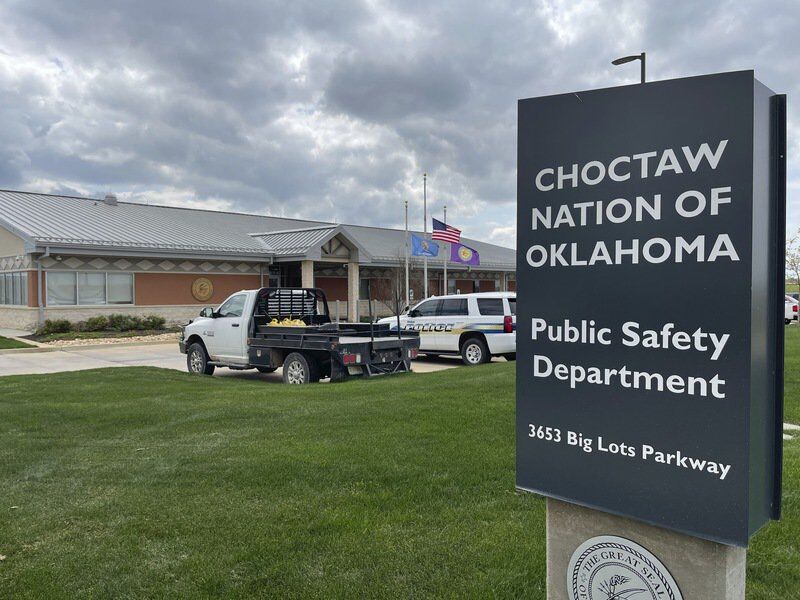 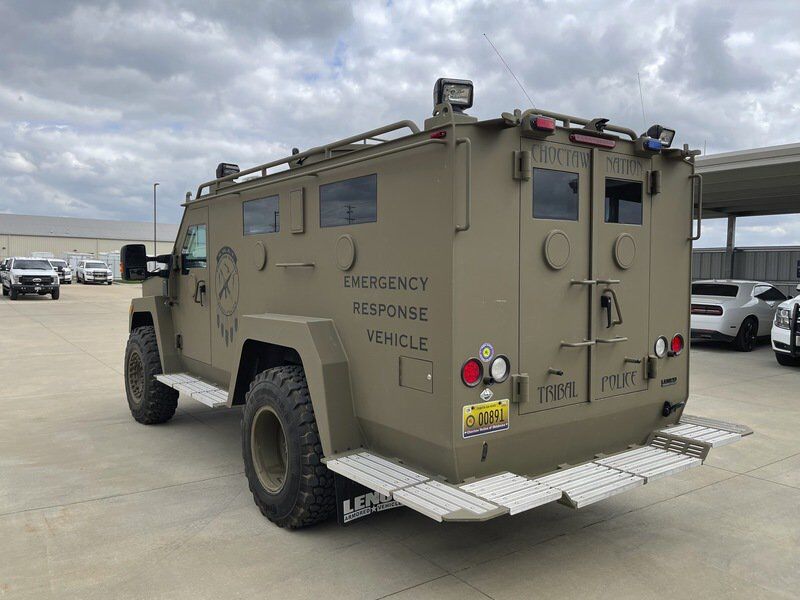 Choctaw Nation Executive Director of Public Safety John Hobbs said assistance from tribal officers is available to all law enforcement agencies within the tribe’s boundaries, regardless if a cross-deputization agreement is in place.

Agreements with the Choctaw Nation that have been in place for decades went largely unchanged and Hobbs said his department has continued working with local agencies since the U.S. Supreme Court ruled in July 2020 that the Muscogee (Creek) Nation reservation was never disestablished. The Oklahoma Court of Criminal Appeals applied that ruling to the Choctaw Nation on April 1.

“I know some agencies may be concerned about how this is all going to play out and I think as long as we’re working together, we can make sure there’s not any gaps in coverage and people don’t get out,” said Hobbs. “It’s going to be a partnership with all of us to try and make sure that we’re providing good service to the community, native and non-native.”

Hobbs also said the agreements were first made with state and local law enforcement agencies so tribal officers were able to handle situations with non-Native Americans on Choctaw-owned properties in southeast Oklahoma.

The original agreements noted that tribal lands were “checkerboard” throughout the state — referring to the gaps in jurisdiction.

Hobbs said the agreements became more important after the Oklahoma Court of Criminal Appeals ruled that the U.S. Supreme Court’s decision in McGirt v. Oklahoma applies to the nearly 11,000 square miles of the Choctaw Nation.

“If we were dealing with a non-Native on Choctaw property, then we would have to utilize the cross commission that we had either with that city or with that county to deal with those non-Natives,” Hobbs said. “In reverse, now it’s going to work the same with them, if they’re dealing with a Native American, then they can utilize that cross commission.”

Hobbs said “fear of the unknown” fueled rumors since the McGirt ruling — including whether a non-tribal law enforcement agency can write a citation when a Native American is stopped.

He said the agency in that situation could still write the citation and the only thing that changed is where it would be prosecuted.

"The only difference is which court it goes to," Hobbs said, adding agencies with cross-deputization agreements can also detain and arrest Native Americans.

The Oklahoma Interlocal Cooperation Act allows public agencies to enter into agreements with federally recognized tribes. It was amended in 2006 to say such agreements “shall not require approval by the Joint Committee on State-Tribal Relations or the Governor."

The vote allowed the tribe to join into cross-deputization agreements with more law enforcement agencies within the 10-and-a-half counties of the tribe’s boundaries.

The 2006 agreement states the cities wishing to enter the cross deputization agreement had to sign a one-page addendum to be filed with the Oklahoma Secretary of State.

The agreement with the tribe recognizes that when an arrest is made the officers may not know whether the involved parties are Native American or if the suspected crime occurred within Indian Country.

“Therefore, there is great difficulty in determining immediately the proper jurisdiction for the filing of charges,” the agreement states.

The agreement goes on to state the official determination of jurisdiction will be made by a prosecutor or a court within the various jurisdictions, not by cross-deputized arresting officers.

District 18 District Attorney Chuck Sullivan told the News-Capital in August 2020 he met with local law enforcement agencies within his district to recommend departments enter into an agreement with the tribe if they had not done so already.

Hobbs said only two counties in Choctaw Nation boundaries — Hughes and Pontotoc — do not have an agreement with the tribe.

“Hughes County is like half a county, the bottom half of the county, and Pontotoc is just a small sliver on the east side,” Hobbs said of the tribe's reach.

Hobbs said there are 51 Choctaw Nation Tribal Police officers and "we’re actually in the middle of trying to get approval to hire some more.”

He said his office conducts free training sessions once every month with area law enforcement agencies to get "them familiar with the criminal jurisdiction in Indian Country.”

“We’ve been planning for this for a couple of years, so we knew that there would be a little bit of stress,” Hobbs said.

Hobbs also explained the protocol that local law enforcement will use when making a contact with a Native American and that assistance from tribal officers is available to all law enforcement agencies within the tribe’s boundaries, regardless if a cross-deputization agreement is in place.

“Those guys back each other up all the time out there,” Hobbs said.

Hobbs said the Choctaw Nation, along with the other Five Tribes, have set up a phone line where outside agencies can call to verify a person's status as a Native American.

“Each of the Five Tribes have set up a line like that to call into,” Hobbs said. “Outside the Five Tribes, I’m not sure what their verification processes are.”

The director said the line, along with his dispatchers, are available whenever they are needed.

“We have a dispatch here that’s 24/7 so any agency that needs, or anyone, that needs a tribal officer can contact our tribal dispatch,” Hobbs said. “Usually, if a county or a municipal police officer goes out on a call and it turns out to be a major case that they want us to handle or something that they need to turn over to us, they can just have their dispatch contact our dispatch.”