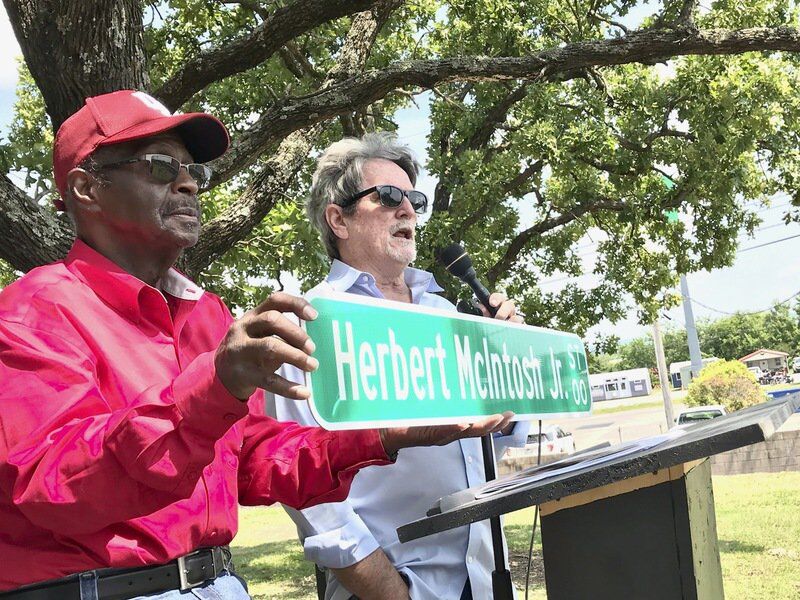 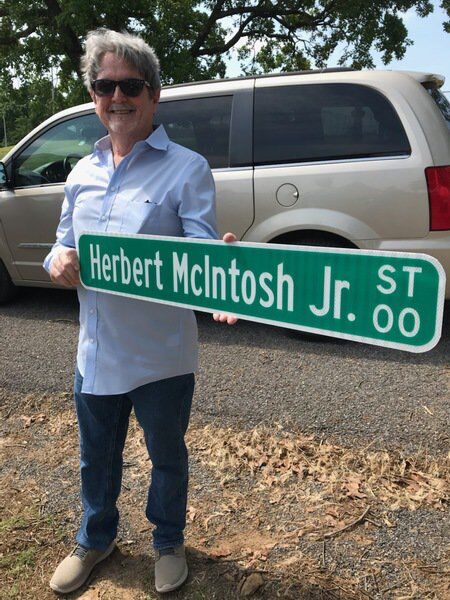 JAMES BEATY | Staff photoMcAlester Mayor John Browne displays the prototype for a new street sign bearing the name for the late Herbert McIntosh Jr., who died while on duty with the McAlester Police Department. 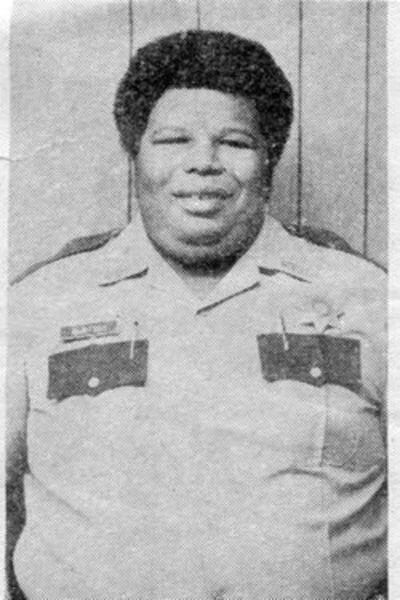 JAMES BEATY | Staff photoMcAlester Mayor John Browne displays the prototype for a new street sign bearing the name for the late Herbert McIntosh Jr., who died while on duty with the McAlester Police Department.

Police officers who worked alongside the late Herbert McIntosh Jr. are thrilled that a McAlester street has been renamed in his honor.

McAlester Mayor John Browne recently unveiled a new sign designating Herbert McIntosh Jr. Street during an event at the park shortly after McAlester city councilors unanimously voted  to rename the section of street in honor of McIntosh, known by his nickname of "Heavy Duty." Signs recognizing the name change have now been put in place, the last step in making the change official.

Corporal McIntosh, who was 35, served on the McAlester Police Department for 11 years.  On the morning of May 9,1984, he and shift Captain officer Willie Faries were riding along together near the end of their 11 p.m. until 7 a.m. "Hoot Owl" shift. Though they ordinarily drove their own patrol cars, sometimes Faries and McIntosh rode around together shortly before the shift's end.

Faries said he heard McIntosh make what he thought was a snoring sound. At first, he thought, McIntosh was joking about being asleep.

"I said 'Heavy Duty, if I've got to be awake, so do you."' He quickly realized it was an emergency medial situation, when McIntosh's head leaned against his shoulder.

Since they were already close to Carl Albert Parkway, Faries did not want to lose time by pulling over and waiting for an ambulance. He rushed McIntosh directly to the McAlester Regional Health Center.

Doctors at the hospital worked to try and resuscitate McIntosh, but were ultimately unsuccessful.

More than a McAlester street bears Herbert McIntosh Jr.'s name. It's included on the Oklahoma Law Enforcement Memorial in Oklahoma City, which lists the names of law enforcement officers in the state who died while on-duty.

People in the community and the surrounding area knew McIntosh not only as a police officer but also as a boxing instructor who worked with youth.

Mayor Browne received the request for the city to consider renaming the street in McIntosh's honor.

Browne, who boxed as a youth for the team in the Hartshorne-Haileyville area, said the he first became aware of McIntosh during sparring sessions with the McAlester team.

"We came up here and sparred and I got to know who he was," Browne said.

After receiving the request to name a street in McIntosh's honor, Browne did some research.

"I talked to some people who worked with him, people whose opinion I respected," Browne said. He said McIntosh is deserving of the honor.

"He represented the city well," Browne said Monday. McIntosh acted on his own accord to work with kids, the mayor noted.

"It was well-worth getting the name change," said Browne. "There's strong support for it."

"The first time I remember seeing him was when he was a heavyweight boxer," Wansick said. "My dad was a boxing fan and I was at Duty's fights."

Wansick started working as a McAlester police officer in 1981. "When I went to the night shift in early '82, Duty was over there," Wansick said. "He was a fixture; he was night shift, born and bred."

"He was well-respected," Wansick said, not only for his police work but also for his work with youth.

"He was a big man, with a big heart," said Wansick.

"He was fair and compassionate. He would also hold people accountable. He was fun to be around; he was fun to fellowship with. He wasn't just a co-worker; he was a friend.

"The day he passed away, I was in police training in Oklahoma City," Wansick said. The police chief informed McAlester officers taking the training what had happened.

"I felt like I'd been gut-punched," Wansick said. "McAlester lot a valuable asset that day." He totally agrees with renaming the section of Fourteenth Street in McIntosh's honor.

"I think it's very appropriate and I'm glad to see it happen," said Wansick.

Hearod knew McIntosh from watching him box and participate in other events. As a fellow police officer, Hearod's glad to see McIntosh honored.

So is Faries, who retired as assistant McAlester police chief.

"I think it's cool and well-deserved," Faries said. "He kept a lot of kids out of trouble."

Derrick McIntosh Sr., one of McIntosh's sons, said his father was one of three family members to wear the badge before him and all were instrumental in his father's decision to serve the community as a law enforcement officer. He also spoke of his father's other activities.

"He was a professional boxer, boxing coach, mentor and friend to many," Derrick McIntosh said.

"During his short life he was a man of character, sound morals and fairness. More importantly, he served his community continuously. Whether giving instruction in boxing or simply talking to someone he encountered while on the job, he was always kind and respectful.

"His love for people in general broke color barriers as he saw no differences in people; he just loved them the same and disciplined them equally if needed," said Derrick McIntosh.

"He left way too soon but his life touched many then, and 37 years after his passing, he is still touching lives now."