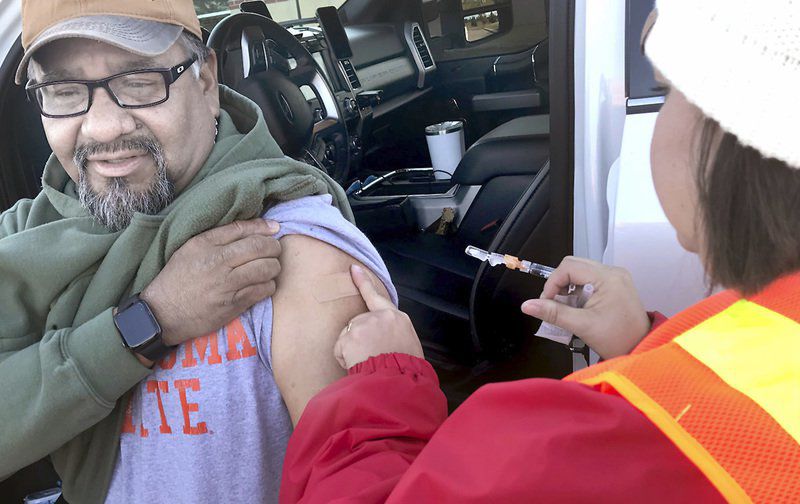 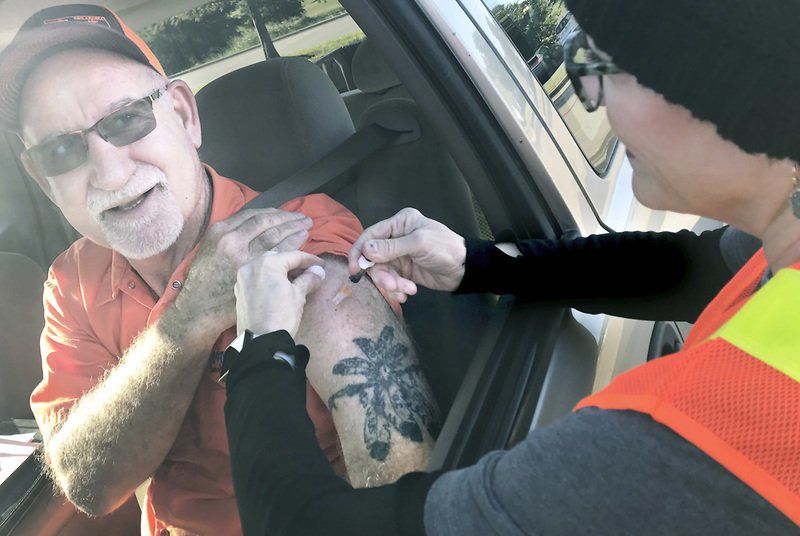 Although the temperature in McAlester plummeted to the low 40s on Friday morning and the breeze made it feel even colder, plenty of local residents pulled up, rolled up their sleeves and got a free vaccination.

Nurses stationed outside were ready to begin giving the shots at 8:30 a.m. sharp, and it didn’t take long for the first drivers to arrive. By around 9:05 a.m., more than 55 individuals had already been given a flu immunization.

Nurses continued to give vaccinations even after the drive-through clinic was set to end at 4 p.m., not wanting to turn away anyone. They were pleased when they totaled the number of vaccinations given.

“We had 619 total,” said Coordinating Nurse RN Tiffany Busby. “We are thrilled — overly thrilled — with that number.”

Earlier in the day, drivers were directed to enter the east entrance of the health department parking lot, then drive around to the south side, where preliminary information was taken. They then pulled around to the west side of the building, where nurses and those assisting them were stationed.

At several points in the morning, four-to-five vehicles arrived around the same time.

“That’s how it goes — it goes in spurts,” said Busby, as she picked up a syringe and headed toward a pickup. Team member Cheryl McElhany accompanied her, to expedite the brief information-gathering process.

Even when several drivers arrived almost simultaneously, they had little waiting. With several nurses and support personnel stationed outside, nurses and assisting health department personnel could deal with more than one vehicle at a time.

Early arrivals included city of McAlester Land Maintenance Supervisor Sherman Miller. He rolled up his sleeve so Busby could give him an influenza vaccination while he sat behind the steering wheel of his pickup truck.

“When these guys give you a shot, you can’t even feel it,” Miller said.

Nathan Bond, who is a retired McAlester police officer, also drove up for an early-morning vaccination. He parked and stepped outside the pickup to get his shot from RN Elaine Morton.

“I always come and get it early, ever since I was with the police department,” said Bond. “I’ve never had the flu since I’ve been getting it.”

A partnership with the Choctaw Nation of Oklahoma makes it possible for the influenza vaccinations to be given free of charge, health officials said.

For those who missed the Friday event, there are still opportunities to get a free influenza vaccination.

The Pittsburg County Health Department is joining with the McAlester/Pittsburg County Office of Emergency Management for another drive-through flu clinic next Friday, Oct. 18.

The purpose of this drive-through clinic is to test the ability of the health department and the regional emergency response team to provide mass immunizations in case of a public health emergency.

Once again nurses say no dogs should be in the vehicles, with the exception of service dogs. That’s because the canines sometimes think the nurse giving the vaccination means to do harm, and the animals react aggressively.

Also, free influenza vaccinations are available on a daily walk-in basis at the Pittsburg County Health Department for those who do not participate in one of the drive-though clinics.