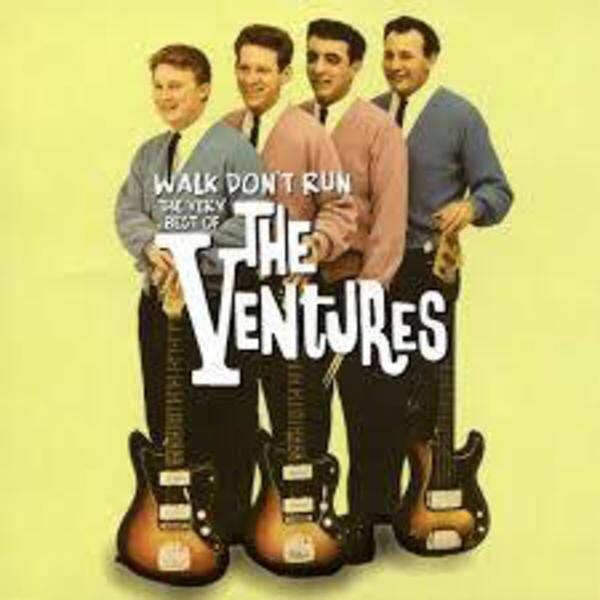 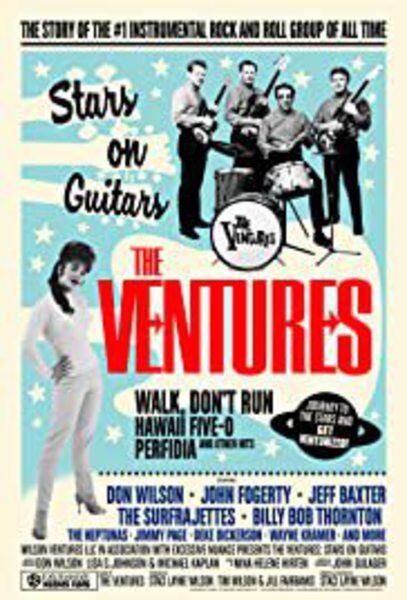 I’m still sometimes surprised at the reach of musicians and singers from Oklahoma — and it’s not because I’m not already well-aware of many of the supremely-talented artists who hail from the Sooner State.

Rather, it’s more like of instances of “Wow! Here’s another great artist who called Oklahoma home.”

In this case, it’s a couple of members of a rock band that charted 37 albums in 12 years for the U.S. market and have released more than 450 recordings worldwide, at times outselling artists such as The Beatles and the Rolling Stones on the international market.

Perhaps part of their international success — in addition to their mastering their instruments and great song choices — is because they had no language barrier to contend with when releasing albums overseas. The Ventures are the most successful instrumental band in rock ‘n’ roll history.

Founding member Bob Bogle was born in Wagoner and fellow Venture Nokie Edwards, who was always proud of his Cherokee heritage, was born in the small Garfield County town of Lahoma.

They are both about to be featured in the first-ever full-length documentary about their band, other than a few television specials.

“The Ventures: Stars on Guitars” from Vision Films is set for a Dec. 8 release on DVD, Blu-Ray, Video On Demand and streaming platforms. The two Oklahomans will no doubt be featured prominently, since both Bogle and Edwards are part of The Ventures’ classic lineup, along with rhythm guitarist Don Wilson and drummer Mel Taylor. Amazingly, this year the group is celebrating the 60th anniversary of its first hit.

While both Bogle and Edwards were born in Oklahoma, they both found their first major musical success on the West Coast — not in LA or San Francisco — but in Tacoma, Washington.

The Ventures began when Bogle and Wilson met at a car lot, found they both liked playing guitar and decided to get together, first on acoustics. They later got a couple of electric guitars and an amplifier and played in Tacoma as a duo. Oftentimes they spent their days laying bricks before playing in clubs at night.

Meanwhile, Nokie Edwards’ family had moved to Washington and the talented Oklahoma guitarist soon came to the attention of those involved in the area’s music business — including Buck Owens, who took on Edwards as lead-guitarist with his band. This is before Buck had his own major breakthrough, so when Bogle and Wilson saw Edwards playing in a club one night, they asked him to form a band.

Edwards agreed and the band — originally known as the Versatones — now had a three-guitar lineup. They used several drummers in the beginning, including one named Skip Moore who decided to leave the band to work at his family’s filling station.

Moore was still on board when the group learned an instrumental song from a Chet Akins album called “Hi-Fi in Focus.” The song, “Walk, Don’t Run” had been written by jazz guitarist Johnny Smith. The budding Ventures rocked it up and it soon became the most requested song in their repertoire. That provided enough incentive for them to drop by a small Seattle studio to record it.

Combing bass riffs with a melodic lead line and powerful drumming “Walk, Don’t Run” soon garnered play on a local radio station— as a lead-in to the news. After the station got flooded with calls, the DJ asked the band’s fans to quit calling the station. He would start playing “Walk, Don’t Run,” in its entirety.

It became such a regional hit that it gained national distribution — and wham! The song shot all the way to Number 2 on the Billboard Charts in August 1960 — kept out of the Number 1 position only by Elvis Presley and his hit “It’s Now or Never.” Not bad for a couple of guys from Wagoner and Lahoma.

On the original version, Bogle played lead guitar and Edwards played bass. However, when they recut a more surf music-sounding version of the song and called it “Walk, Don’t Run ‘64,” they switched, with Edwards playing lead and Bogle playing bass. This time the song rocketed to Number 8 on the Billboard Charts — with the new release of “Get Back” by The Beatles behind them at No. 10.

The Ventures went through a few drummers. A 17 year-old lad named George Babbitt, Jr. joined the The Ventures and was an excellent drummer — but had to quit the band because he was too young to play nightclubs. That would not mark the last time The Ventures and Babbitt would cross musical paths. They would meet again a few decades later in an unusual fashion.

They were all on-board when The Ventures scored another massive hit — The theme to the TV series “Hawaii Five-0.” Since then the band has continued to record and tour the world — especially in Japan, where they outsold The Beatles two-to-one.

Who is known as the King of the Guitar in Japan? Jimi Hendrix? Eric Clapton? Jeff Beck? Jimmy Page? Nope, it’s the guy born in small-town Oklahoma named Nokie Edwards.

When The Ventures were inducted into The Rock and Roll Hall of Fame in 2008, John Fogerty gave the induction speech.

The Ventures have experienced a few personnel changes over the years, most notably by Gerry McGee, who stepped in when Edwards left the band. Wilson is now the only original member. HIs daughter, Staci Layne Wilson, wrote and directed the new documentary. Leon Taylor, the son of Mel Tayor, fills the drummer’s seat. Bob Spalding has been with the group since the ‘80s.

Through all the personnel changes, the music has endured.

I wondered how Edwards got the unusual first name of Nokie, but that was before I knew he hailed from Oklahoma. His birth name was Nole, but his father, Elbert Edwards, gave him the the nickname, combining part of his son’s first name with Okie.

I mentioned earlier that The Ventures would meet up again with George Bobbitt, Jr. — the teen who had to leave the band because he was too young to play in clubs.

They played together again in 1998 in Washington D.C., when The Ventures performed with the U.S. Air Force Band. Wilson told the audience the band’s former drummer was present and they invited him to join them onstage. Bobbitt, who was now a Four Star General with the U.S. Army, joined The Ventures onstage in full dress uniform to play the drums for “Walk, Don’t Run” — and he nailed it perfectly.