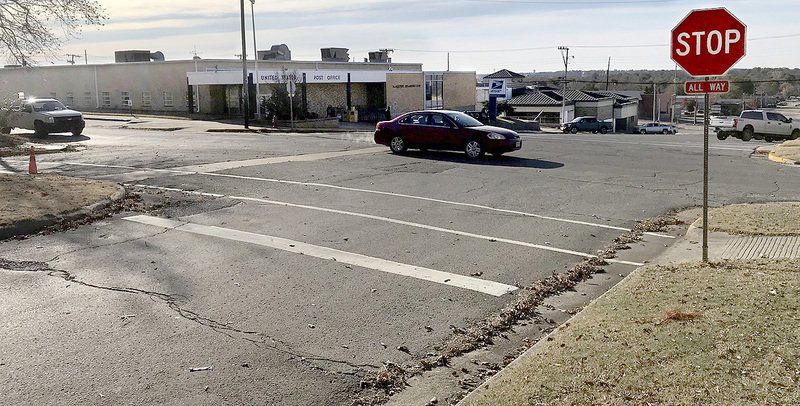 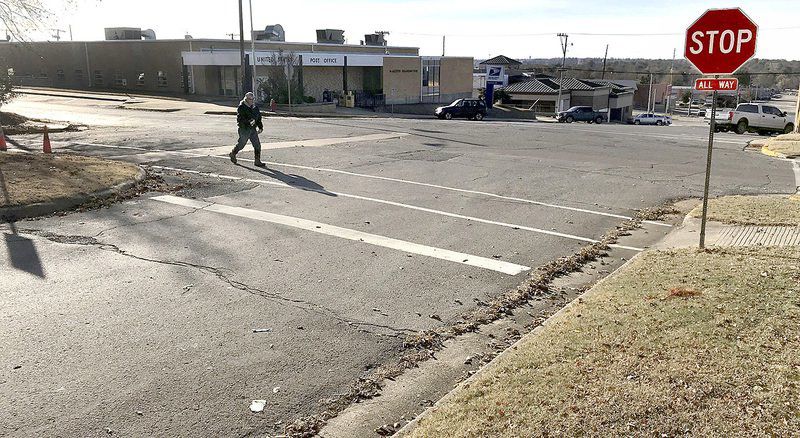 KEVIN HARVISON | Staff photoA pedestrian crosses Fifth Street at the Fifth Street and Washington Avenue intersection, with the U.S. Postal Service building in the background. City councilors have passed a measure on a split vote to award a nearly $600,000 bid to redo the intersection with plans to include a traffic roundabout at the site.

KEVIN HARVISON | Staff photoA pedestrian crosses Fifth Street at the Fifth Street and Washington Avenue intersection, with the U.S. Postal Service building in the background. City councilors have passed a measure on a split vote to award a nearly $600,000 bid to redo the intersection with plans to include a traffic roundabout at the site.

Plans for construction including a new circular traffic roundabout at the intersection of Fifth Street and Washington Avenue have accelerated — with city councilors deciding to accept a bid for a major portion of the project.

The city council voted four-to-two to accept the bid amount of $599,719 from Built Right Construction for the Washington Avenue Improvements Project and to authorize Mayor John Browne to sign the notice of award for the winning bid.

Next, Infrastructure Solutions Group LLC is to get the required bonds and insurance from the contractor and then coordinate a pre-construction conference. An official notice to proceed will then be issued so work can begin.

Dale Burke, the president of Infrastructure Solutions, which provides engineering, construction oversight and consulting services to the city of McAlester on various projects, told city councilors during their regular Tuesday night meeting at City Hall that five contractors received plans for the Washington Avenue Project.

Built Right Construction submitted the lowest of three bids that were submitted by contractors bidding on the project, he said.

Washington Avenue improvement plans include new asphalt along Washington Avenue between Fifth and Sixth Streets. New concrete curbs and gutters between the intersections are included in the project.

Another portion of the project calls for parking spaces on the north side of the U.S. Post Office building at the corner of Fifth Street and Washington Avenue to be pushed further to the south, closer to the building.

City Manager Pete Stasiak previously said the sidewalk will get moved three feet closer to the Post Office building. Stasiak noted that the rear ends of many vehicles extend into Washington Avenue under the current parking system.

Ward 2 Councilor Cully Stevens and Ward 6 Councilor Zach Prichard voted "no" to not award a bid for the project. Ward 5 Councilor Maureen Harrison did not attend the meeting, which is why only six votes were cast.

Ward 6 Councilor Zach Prichard had questions about the project's cost. "How much is the cost of putting in just the street?" Prichard asked.

"We looked at redoing the intersection at Fifth Street," Stasiak said. He went on to say that the traffic circle was offered to the city.

Prichard asked if sewer and drainage issues at the intersection would also be addressed and was told they are included in the Washington Avenue Project.

"We are addressing it," said Burke.

Prichard said during the meeting that he drives down the street almost every day and he said it looks like the city could better spend the nearly $600,000 somewhere else.

On another item, city councilors voted to accept Built Right Construction's bid of $87,990 and authorize the mayor to sign a notice of award for the Block 231 Alley Drainage Improvements Project.

Prior to the vote, Stevens noted that Built Right Construction is involved in several city projects and he asked if the company could handle that workload.

"Can they do all that?" Stevens asked.

Robert Vaughan, of Infrastructure Solutions, said he had a conversation with the company regarding that matter and he expressed his confidence Built Right could handle the workload. He said he was told there would be additional hiring.

"They have multiple crews working," Vaughan said. He also said the company will hire others to complete portions of the work, if necessary.

Vaughan said this portion of the Alley Improvements Project is in the area of Adams Avenue, between D and E Streets.

The Savanna-based Built Right Construction recently worked on the city's Downtown Streetscapes Project and completed the bulk of the work ahead of schedule.