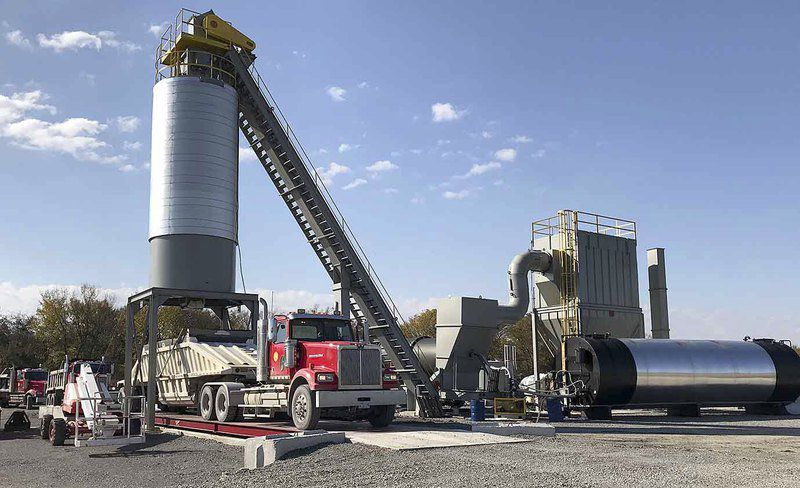 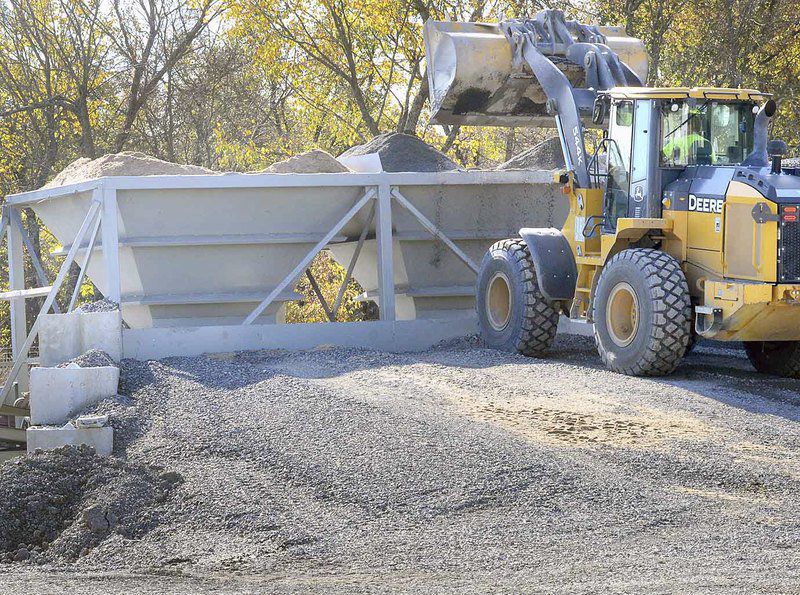 KEVIN HARVISON | Staff photoA front end loader drops a load of mixing materials that will be used to mix another load of as asphalt during Tuesday's opening day at the county's new asphalt manufacturing plant. 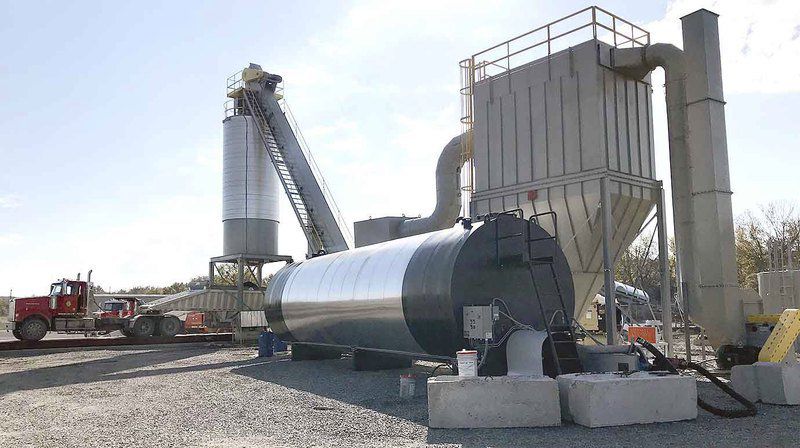 A load of asphalt is dropped into the bed of a truck Tuesday during the opening day of Pittsburg County's new asphalt plant.

KEVIN HARVISON | Staff photoA front end loader drops a load of mixing materials that will be used to mix another load of as asphalt during Tuesday's opening day at the county's new asphalt manufacturing plant.

A load of asphalt is dropped into the bed of a truck Tuesday during the opening day of Pittsburg County's new asphalt plant.

Smith, who is the District 2 commissioner, had already placed a large order.

"I'm going to put in an order for 300 tons," Smith said. He said he ordered so much asphalt because there are some jobs he wants to complete.

On Tuesday the plant belched smoke as three trucks were lined up waiting to have their beds filled with fresh asphalt as the long-awaited opening day arrived. County trucks were pulling onto a set of scales beneath a tall silo, which then dropped loads of asphalt into the beds of the waiting trucks.

The plant is between Bache and Alderson, east of McAlester, on the south side of U.S. Highway 270, across the highway from the Yellowhouse Machinery John Deere site.

District 3 Commissioner Ross Selman and District 1 Commissioner Charlie Rogers were also glad to see the county's plant kick into production. Commissioners said by operating the county's own asphalt plant, they should now have a ready supply of asphalt whenever they need it, weather permitting, of course.

"I'm already feeling good," said Selman, who said he saw some test batches of asphalt produced prior to Tuesday's opening day, including a batch put down in the driveway at the plant entrance.

Not only will the county now be able to produce asphalt as needed, commissioners can also control the quality.

"It will be a better quality," Smith said.

Rogers planned to wait a day or two before picking up the first load of asphalt at the new county plant for use in District 1.

"I'll let tomorrow be a guinea pig," Rogers said Monday, the day before the plant opening.

Commissioners said they decided to purchase their own asphalt plant so they could have a ready supply of asphalt available whenever they need it. Also, asphalt plants in the area are known for completely shutting down during the winter months, they noted.

While the commissioners also won't be able to operate the county's asphalt plant when the temperature falls to a certain level, they plan on opening the gates again when temperatures begin to rise. They plan to keep track of the weather on a daily basis.

"We are going to keep it going as long as the weather permits," Smith said. "I'm probably only going to lay asphalt when the temperature is between 45-to-50."

Two county employees are operating the facility: Plant Manager Shawn Coffey and loader/operator Jediah Benton. What will they do when colder temperatures cause the plant's operations to cease on a temporary basis?

"They will work for us," Smith said, meaning the two will be temporarily assigned to other duties within the county's three districts.

Rogers said fire damage to the asphalt plant at Enterprise, one of three asphalt plants in the general area, would have further reduced the supply of asphalt available to the commissioners.

County commissioners previously said they believe they are precluded from selling the asphalt to others, because they are prohibited from competing with private business — although there may be a gray area in regard to selling to contractors working on county projects, especially if the needed asphalt is not available from other sources or if the other plants are closed.

What does the new asphalt plant mean for the county commissioners and residents of Pittsburg County? Smith said having a year-round supply of asphalt will make a big difference.

"It should mean we will be able to do some winter months and in summer months when we haven't been able to get it," Smith said.

Selman is familiar with the problem.

"There were 60 days this summer when I could not get asphalt when I needed it," said Selman.

Rogers said the plentiful supply at the county's asphalt plant will be beneficial to District 1, especially in 2020.

"I've got a couple of big projects coming up next year," Rogers said.

Commissioners voted in April 2018 to purchase the plant for $1,479,000 from Ahern Industries, Inc., which submitted the winning bid, of San Antonio, Texas. The price included delivery and an Ahern Industry representative on-site as the equipment was put together, who also advised commissioners about construction required to make the plant operational.

During the production procedure, workers use a front end loader to scoop up large portions of materials used in mixing the asphalt, such as sand and gravel or crushed stone, and then unload it. The asphalt mix is placed in a mixing drum known as a hopper and the finished product is then carried from the mixer to an enclosed conveyor belt.

Asphalt is carried up the conveyor belt to a huge silo. Below the silo, asphalt is dropped into the bed of a truck parked on the scales to weigh the amount of the load. Once the needed amount is loaded, the truck is driven off the scales and headed toward whatever job awaits.

A few loose ends remain before the county's asphalt plant is totally complete. It still has no running water, but Smith said the Adamson Water Distribution Company should be able to tie into an existing line on the same side of the highway as the plant.

Commissioners are also looking into the possibility of purchasing another tank that could be used in the mixing of a different type of asphalt called UPM asphalt, for Unique Paving Materials, that consists of a cold patch asphalt mix that is also used for filling potholes and other road repairs.