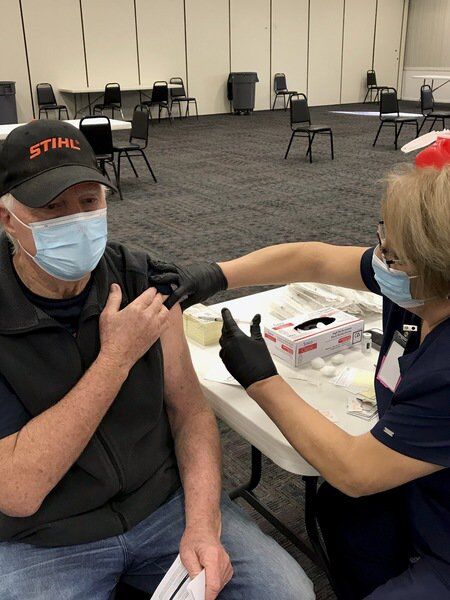 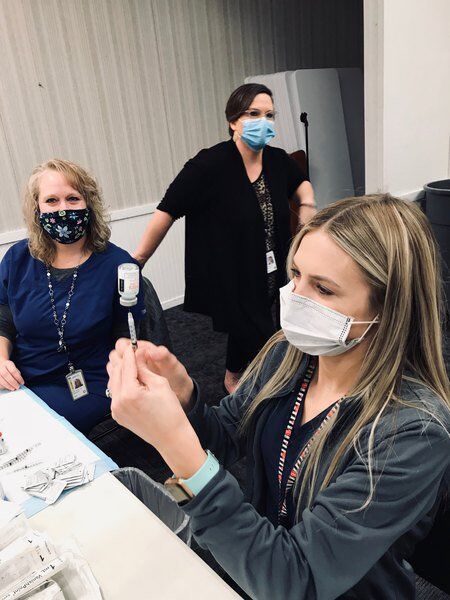 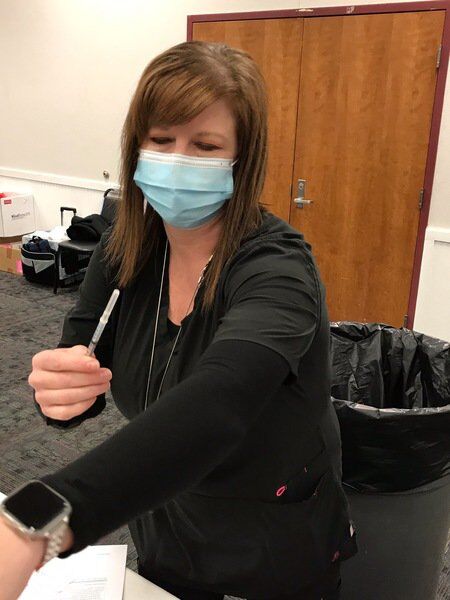 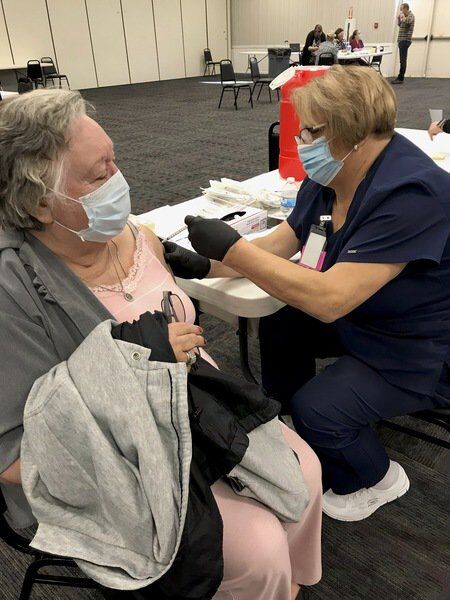 JAMES BEATY | Staff photoShirley Mathews-Nelson, left, of Hartshorne, gets a COVID-19 vaccination administered by Pittsburg County Health Department Nurse Practitioner Crystal Mapes during the Tuesday rollout of Phase 2 of the COVID-19 vaccination schedule at the Expo Center in McAlester.

JAMES BEATY | Staff photoShirley Mathews-Nelson, left, of Hartshorne, gets a COVID-19 vaccination administered by Pittsburg County Health Department Nurse Practitioner Crystal Mapes during the Tuesday rollout of Phase 2 of the COVID-19 vaccination schedule at the Expo Center in McAlester.

Pittsburg County Health Department Nurse Practitioner Crystal Mapes leaned forward to give Brown the shot, which he said he didn't feel at all.

"I didn't even know they put it in," Brown said as he rolled down his sleeve and then went into another room at the Expo Center to wait for 15 minutes to make sure he didn't have an adverse reaction to the vaccine.

It began one of the largest mass vaccinations in Pittsburg County history, with all 800 appointments scheduled for Tuesday.

Health officials said appointments were required, but even so a line stretched from the Expo Center's main entrance almost all the way to the west end of the building before doors opened at 10 a.m. Some of those standing in line occasionally shivered in the early morning chill as they waited for the Expo Center doors to open.

Brown said he became first in line after some people who were ahead of him left after learning health officials said appointments were required to get vaccinated. Ready to get his as soon as possible, Brown, had made his appointment in advance.

"I think it's the only thing you should do," he said. "It's going to prevent my having it or anybody else having it."

All 800 appointments for the Phase 2 rollout had been filled before the Tuesday event began, said Region 9/Pittsburg County Health Department Administrator Juli Montgomery. Phase 2 includes medical personnel, emergency responders and individuals aged 65 or older. Another round of Phase 2 vaccinations set for next Tuesday at the Expo Center already has all 800 appointments filled, she said.

Information on when more appointments can be scheduled will be announced after health officials learn when more supplies of the vaccines will be available, Montgomery said. She expected more information later this week.

"We've been waiting for this day for a long time," he said.

The Moderna vaccine was the only one available at the Expo Center for the Phase 2 rollout. Like, the Pfizer vaccine, it also requires two shots. Moderna's vaccine requires the second shot be given 28 days after the first one.

Those getting the vaccines were given cards with the date they need to get the second vaccination written on it.

Shirley Mathews-Nelson, of Hartshorne, also participated in the first round of the COVID-19 vaccinations Tuesday.

"I think it's humane," she said of getting the vaccination. "I would hate for me to be in a position to make somebody else sick."

The procedure called for individuals to enter the Expo Center, then go to a registration desk near the main entrance. After completion of the registration procedure, they were directed to room on the southeast corner of the building, where the vaccinations were administered.

Forty members of the health department's staff were at the Expo Center on Tuesday to help with the mass vaccinations.