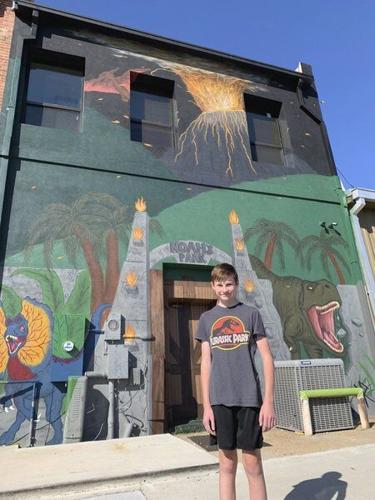 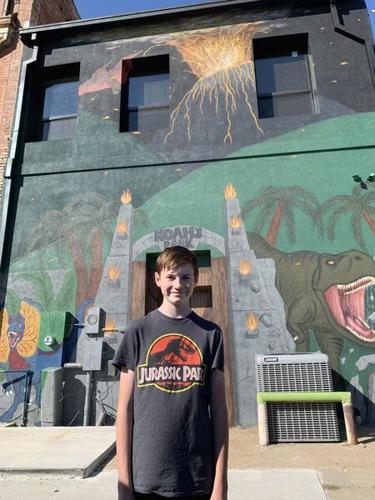 A giant mural brings what some might call a jurassic vibe to historic downtown McAlester.

Justin Few owns the three-story office complex at 24 E. Choctaw Ave. in McAlester that now features a dinosaur-themed mural on the exterior back wall, which originated from his teenage son, Noah, being passionate about paleontology.

“He just wanted to be able share that love and excitement, and to have something for the kids to enjoy,” Justin said.

Justin acquired the three-story building that recently became one of the first major building renovations to follow the Streetscape project in Downtown McAlester.

Noah’s mom, Lori, said they jokingly came to an agreement with Justin over the building’s exterior back wall.

“He wanted to restore it and he wanted it to be historic and keep as many elements as he could,” Lori said. “So Noah and I jokingly one day said ‘OK you can have the building, we just want the back.”

Lori said she and her son wanted to do something fun and creative with the exterior wall on the back of the building in the alley — and a mural featuring dinosaurs seemed a perfect fit.

She said Noah’s passion for dinosaurs since childhood immediately came to mind as an idea for the mural and they contacted local artist Kindra Riddel to get it started.

“Initially we were only going to do a couple of dinosaurs, but she said she’d love to do something all the way to the top,” Lori said.

So Riddel completed a giant mural depicting a Dilophosaurus, a T-rex, a volcano in the background and more with a gate over the doorway reading “Noah’s Park.”

The three-story building includes a store on the ground floor, and massive renovations to the office complex on the second and third floors.

Space on the third floor includes a small loft apartment and a stairway leading out to an outdoor rooftop area where Justin keeps plants and beehives.

Some of the offices previously houses the law offices of Robert A. Layden and J.E. Layden — and an interior wall includes a huge mural advertisement for Piedmont Cigarettes that was likely on the building’s exterior at some point.

Piedmont Cigarettes was among 16 different cigarette brands the American Tobacco Company distributed with the famed T206 baseball cards — including the most valuable baseball card in history featuring Honus Wagner.

A Nov. 30, 1931 News-Capital article reported a major fire at what was then called the J.B. Cambron Building, which led Few to believe the structure was sometime afterward.

The Fews said they hope the mural is a fun photo opportunity for children and families, while also adding to the artistic additions in downtown.

“There are so many great pieces now in downtown and it’s great for the community,” Lori said.