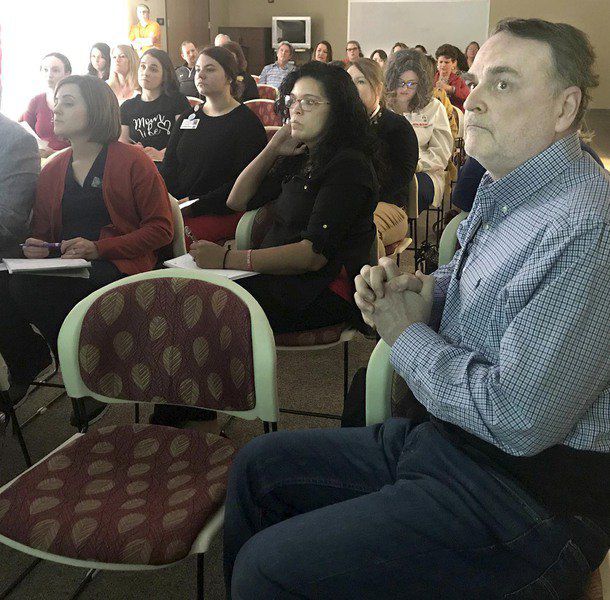 Dr. Greg Rogers, right, medical director at the health clinic at the McAlester Army Ammunition Plant, joins those participating in a Wednesday meeting at the Pittsburg County Health Department regarding the Coronavirus COVID-19. 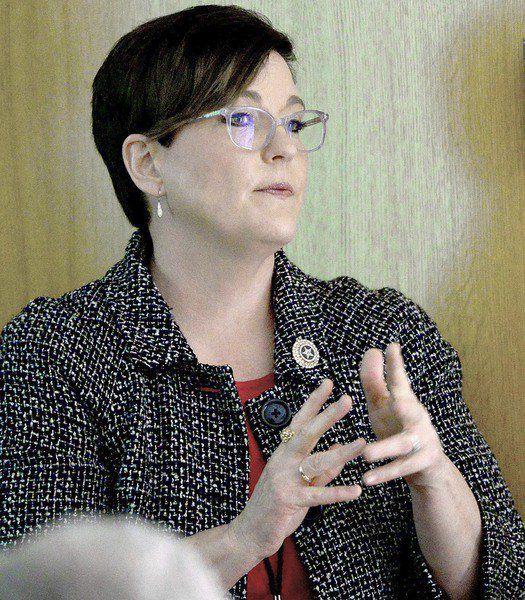 District Nurse Manager Melissa Locke of the Pittsburg County Health Department talks about the Coronavirus COVID-19 during a Wednesday meeting at the McAlester facility. 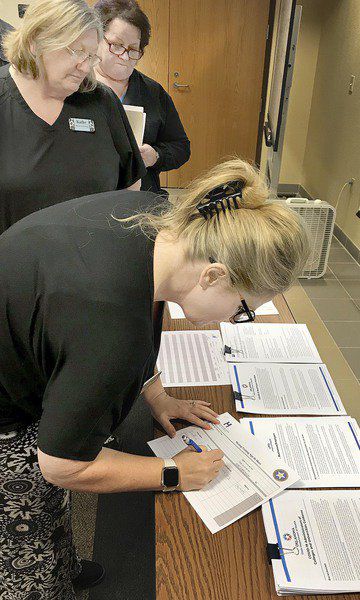 Wendy Cannon, foreground, is followed by Kathy Kerns and Brenda Slotta were among those signing up for an informational meeting regarding the current Coronavirus COVID-19 held Wednesday at the Pittsburg County Health Department in McAlester.

Dr. Greg Rogers, right, medical director at the health clinic at the McAlester Army Ammunition Plant, joins those participating in a Wednesday meeting at the Pittsburg County Health Department regarding the Coronavirus COVID-19.

District Nurse Manager Melissa Locke of the Pittsburg County Health Department talks about the Coronavirus COVID-19 during a Wednesday meeting at the McAlester facility.

Wendy Cannon, foreground, is followed by Kathy Kerns and Brenda Slotta were among those signing up for an informational meeting regarding the current Coronavirus COVID-19 held Wednesday at the Pittsburg County Health Department in McAlester.

No one in Pittsburg County — or any of the other eight southeastern Oklahoma counties served by Regional Health Department Director Juli Montgomery — is being monitored for the coronavirus.

"We aren't monitoring anyone in the nine-county area I serve, including Pittsburg County," Montgomery said.

In addition to Pittsburg County, the Oklahoma State Department of Health was also not monitoring anyone showing symptoms of COVID-19 in Latimer, LeFlore, Atoka, Coal, Pushmataha, Bryan, Choctaw or McCurtain counties — the other counties in Montgomery's coverage area.

Gov. Stitt recently announced one confirmed case of COVID-19 in Tulsa County. A second presumptive case, also in Tulsa County, is under review by the Centers for Disease Control, to see if an initial positive test is confirmed, Montgomery said.

Health Department District Nurse Manager Melissa Locke said there had been 4,384 deaths due to COVID-19 internationally, as of early Wednesday. Another 66,238 individuals were shown to have contracted the disease, but recovered, she said.

Locke pointed out differences between coronavirus and influenza. Someone with the seasonal flu averages transmitting the illness to one more person, she said. For COVID-19, the average is more likely to range from one and one-third to four others.

"It's much easier to transmit than the flu," Locke said.

Locke also noted that information regarding COVID-19 is constantly changing.

Locke noted photos are circulating of a disinfectant stating it provides protection against coronavirus, along with a question about how the disinfectant could have been marketed so quickly.

"Coronavirus is not new," she said. COVID-19 is a different type of coronavirus, Locke noted.

Symptoms are similar to the flu, but some people have no symptoms "and about 85 percent have a mild case of the illness," Locke said.

"With seasonal flu, we worry about children under the age of 5," she said. Coronavirus is striking older people and putting those over 65 more at risk. However, some individuals in their 20s have also succumbed to the illness.

Some preventative measures are similar to those enacted during flu season: Wash your hands often; cough into your elbow; stay home if you are ill.

"You need to think about stocking up, not hoarding," she said, mentioning hand sanitizers and cleaners as examples.

Not everyone who contracts the illness will need to be hospitalized, Locke said.

"Think about how to take care of someone at home," she said, including what room the ill person would be in to help keep them away from others.

Another thing to think about is who will take care of pets.

"National data shows we don't have to worry about getting it from pets," Locke said, but in a few cases, animals caught it from people.

Health officials also advised those who think they or a household member have contracted COVID-19 not to enter a waiting room at a medical facility. Phone ahead because the individual may need to enter by a different entrance to keep from exposing the entire waiting room, they advised.

Dr. Greg Rogers, a medical director at the McAlester Army Ammunition Plant health clinic, has been working with other military bases, including Fort Sill.

"I've been trying to make sure government services are coordinated," he said. "We want to make sure we're working together before anything happens."

He's also contributing to provide needed precautions to try and protect the civilian workforce at McAAP.

Rogers said it was initially thought that COVID-19 could not last long on outside surfaces, but newer information showed it can survive up to nine days.

He also said surgical masks or other face masks should be worn by those who already have the illness to help keep from spreading it — not by those trying to avoid it.

Rogers said the illness is spread by droplets, such as when people sneeze. Even if a person's mouth is covered by a mask, the eyes are still exposed, he said.

"We will make sure we support you anyway we can," Enloe said.

Regional Emergency Management Director Joe Acevedo said supplies, such as face masks, could be obtained through emergency management if the need was shown to be a true medical emergency.

Acevedo indicated the process of obtaining emergency supplies could be accelerated.

Kathy Kerns and Wendy Cannon were among those attending the event on behalf of a local nursing home.

Kerns said she attended "so we can learn precautions we need to take for nursing home residents."

Montgomery said she appreciated so many attending the meeting.

"I'm really pleased with the community participation," she said.

"COVID-19 is something we all need to take very seriously," Browne said. He noted that many who have become sick with the illness have recovered.

"By no means panic," Browne said. "You are much more likely to recover than have a bad outcome."

Alva M. Fite, 84, of Harts-horne, passed away on Mon-day, March 30, 2020, at his home. Memorial services will be scheduled at a later date. Arrangements are under the direction of Brumley-Mills Funeral Home of Hartshorne.

Charlie Hazel Dawn Short, infant daughter of Ethan Cole Short and Sierra Jane Labor, went to heaven on Friday, March 27, 2020. In addition to her parents, she is survived by grandparents, Linda Short, James and Shelly Labor, and Laura Beth and Jerry Robinson, and several aunts and uncles. Sh…