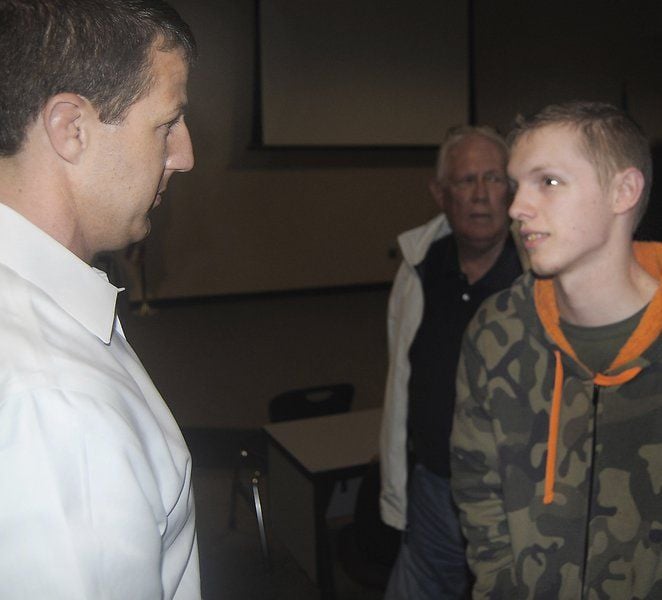 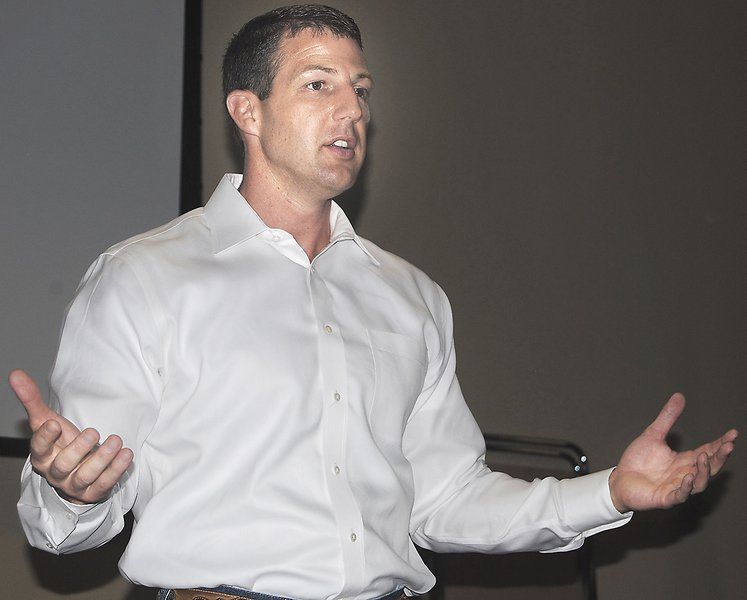 District 2 U.S. Rep. Markwayne Mullin, R-Westville, told McAlester High School students to set and meet goals if they want to achieve their dreams — but he could understand why they might not want to serve in the U.S. Congress, based on the constant bickering on Capitol Hill.

Still, they need to register to vote when they turn 18 and to become involved in the political process, even if Congress hasn’t presented much of an example, he said.

Mullin met with government and history students along with political club members and a few adults Tuesday in a town hall meeting-like atmosphere in the Seminar Room inside the Lucy Freeman Smith Center at MHS. Before he answered their questions from the students, he delivered a lecture regarding how they should set goals and work to meet them.

He also spoke of what he considers the biggest threat to the United States.

“The biggest threat facing our country is the complacency in our country,” Mullin said. He asked the students how many of them knew for certain if their parents voted in the last election. When approximately 20 percent of them raised their hands, Mullin said that’s consistent with what he’s seen at other places.

“I don’t blame your parents,” Mullin said, relating he understands how they could feel disconnected from the political process, given all the political fighting going on in Washington. Still, he said it’s a shame that only about 20 percent knew their parents had voted. He stressed the importance of voting.

McAlester Mayor Steve Harrison stood and also addressed the students on the importance of voting, referring to the recent McAlester Public Schools construction bond issue that lost by the narrowest of margins.

“I think everybody in this rooms knows we had a school bond election and it lost by one vote,” Harrison said.

Mullin returned several times to the bickering on Capitol Hill.

“How many of you wake up and say ‘I’m going to get in as many arguments as I can today? Doesn’t that encourage you about politics, a bunch of people griping at each other? Immediately, in politics, we make an assumption about you because you have an R or D in front of your name,” Mullin said. The prevailing thought seems to be “if you don’t agree with me, you’re an idiot.”

Pointing to the Stars and Stripes hoisted on a stand behind him behind him, Mullin said “We forget what we have in common is that flag.”

Mullin told the students about another problem the nation faces.

“We have $18.1 trillion in debt facing this nation,” Mullin said. “What we’ve been doing hasn’t been working too well. What’s the definition of insanity? Doing the same thing over and over again and expecting a different result.”

When a student asked Mullin when he became involved in the political process, Mullin said “The first political event I attended was when I stood up and said “I’m running for Congress.” He said when he was growing up, his goal was to get a college wrestling scholarship — a goal he achieved. He encouraged students to pursue their goals and to do the work required to meet those goals.

“I spent a lot of time working out, not going out,” he said.

When a student asked Mullin what would be his biggest dream in life, he replied “My kids beings successful.”

At one point Mullin asked the students how many of them knew where they would be five years from now?

A number of them raised their hands, then a few reconsidered.

“Five years?” one asked — obviously surmising that would be a year after college.

Others though, said they were sure of their plans. Some said they planned to attend college while others were planning on entering military service. Whatever their choices, Mullin continued to encourage them to become voters.

He left the students with some parting words of inspiration.

“You can do anything you want,” Mullin said.

Several adults in addition to the students’ teachers and Mayor Harrison attended the event, including Bob Fornell, Kenneth Battles and Clare Thomas.

A few of the students, including Robert Lizik and River Robbins, even stuck around to talk to Mullin for a few minutes following the end of his presentation. What did Lizik say to Mullin? Apparently, Mullin’s talking of the constant bickering in Congress didn’t dissuade Lizik from one of his goals.