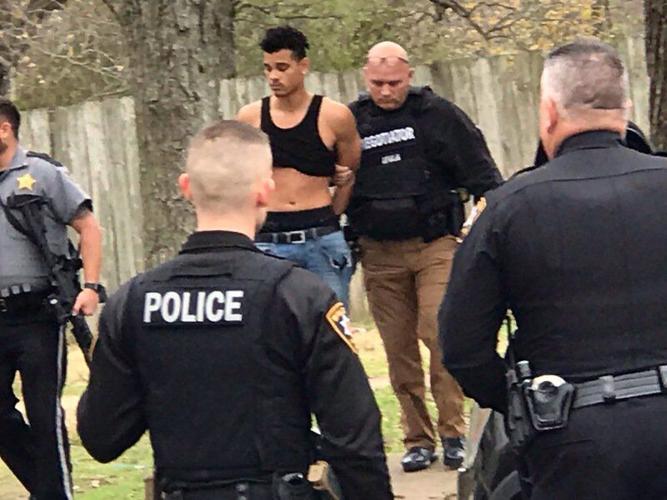 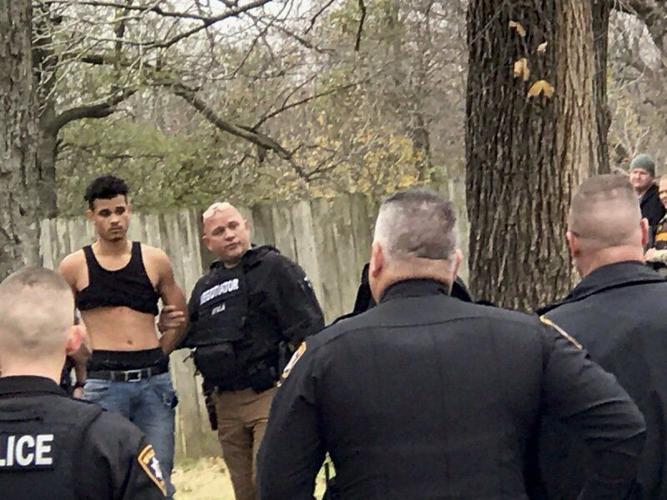 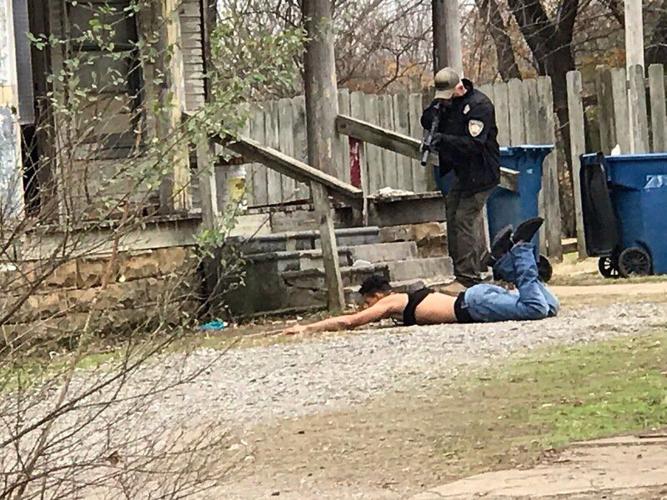 JAMES BEATY | Staff photoA suspect lies on the ground outside a residence  Friday as a law enforcement covers him as the ma surrenders following a standoff on N. Ash St. in McAlester.

JAMES BEATY | Staff photoA suspect lies on the ground outside a residence  Friday as a law enforcement covers him as the ma surrenders following a standoff on N. Ash St. in McAlester.

Police from multiple law enforcement agencies helped take a man in custody following a standoff Friday afternoon at a house near a daycare on N. Ash Street in McAlester.

McAlester Dep. Chief Darrell Miller said the daycare was not involved in any way, but police called parents to come and take their children out of a back door at the facility as a precautionary measure.

Miller said the incident began when someone noticed a vehicle believed to be driven by a man wanted for questioning in connection with an incident at another location. When police arrived, they found the vehicle empty and they focused their search on a house where the suspect was believed to stay, which was near the daycare.

More than 20 law enforcement vehicles, many with flashing lights, converged on the area, with some parked along Stonewall Avenue and still more parked along Ash Street. Several law enforcement vehicles were parked in the parking lot at the daycare, leading some who were driving in the area to erroneously conclude that the daycare was involved in the standoff.

Miller said they were also concerned because a 14-year-old boy was believed to be inside the house where the suspect was initially believed to be hiding. Police with weapons, some dressed in protective body armor and carrying automatic weapons, trained their attention on the home, as a police negotiator used a loudspeaker to urge the suspect to give himself up and come out of the house.

Police switched their focus after the 14-year-old boy boy walked out a different house, a two-story structure with an attic, across the street from the original home that police had first focused on during the standoff.

Law enforcement officers, including a negotiator, continued to call for the suspect to surrender, this time focusing their efforts on the two-story house, surrounding the residence, with many officers holding weapons at the ready.  Another youth stepped from the house, but he wasn't the one for whom police were searching.

Finally, the suspect stepped from the two-storied structure, following instructions from police officers with their weapons trained on him to keep his hands up and to lie on his stomach on the ground.

Police then handcuffed the man and helped him up, escorting him to a Choctaw Police vehicle parked along Stonewall Avenue.

The name of the man arrested wasn't immediately available as law enforcement officers determined who would have custody of the man. As of near 4 p.m. on Friday, he had not been booked into the Pittsburg County Jail.

Agencies with vehicles and officers on the scene included the McAlester Police and Fire Departments, the Pittsburg County Sheriff's Office, Krebs Police, the Oklahoma Highway Patrol and Choctaw Police.