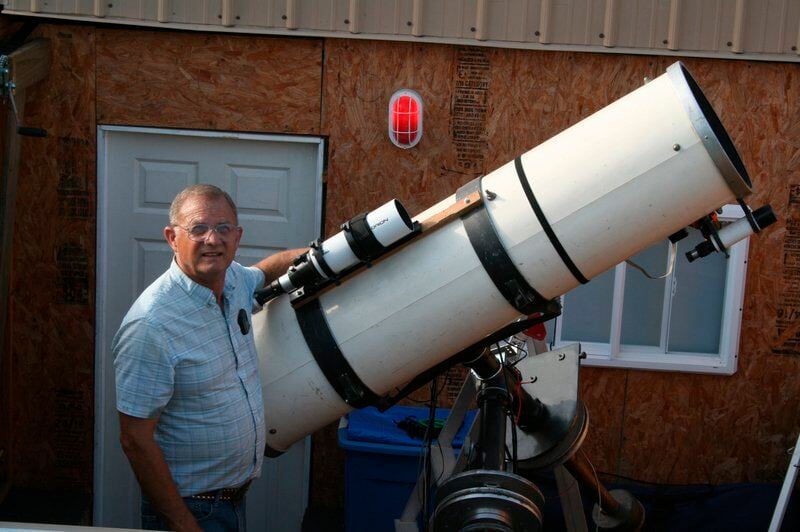 Photo by Caren ScottPhillip Scott stands next to his 12.5 inch Newtonian telescope at his OKSky Observatory near Kiowa. Scott said he used the telescope and other instruments to discover a new exoplanet outside our Solar System. 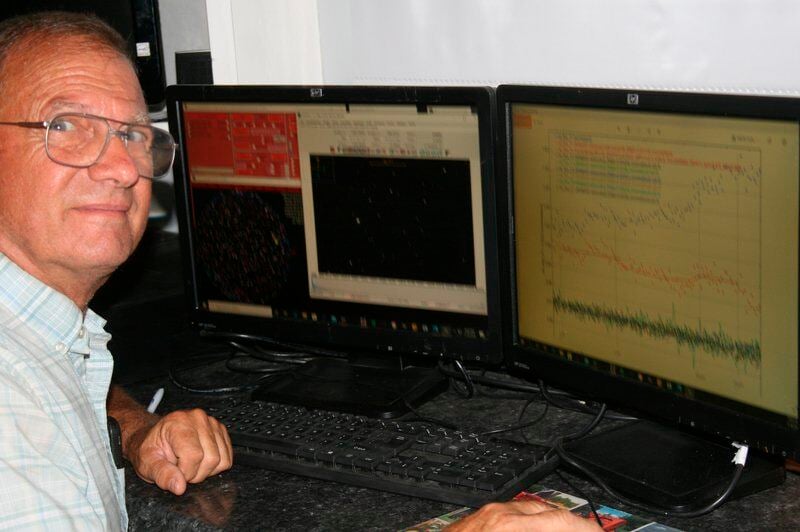 Photo by Caren ScottPhillip Scott sits at the computer used to control the telescope, cameras and graphic software used at his OKSky Observatory near Kiowa. Scott, who is working with an international group, said the equipment made it possible for him to detect a new exoplanet outside our Solar System.

Photo by Caren ScottPhillip Scott stands next to his 12.5 inch Newtonian telescope at his OKSky Observatory near Kiowa. Scott said he used the telescope and other instruments to discover a new exoplanet outside our Solar System.

Photo by Caren ScottPhillip Scott sits at the computer used to control the telescope, cameras and graphic software used at his OKSky Observatory near Kiowa. Scott, who is working with an international group, said the equipment made it possible for him to detect a new exoplanet outside our Solar System.

When Phillip Scott retired as an astronomy and science teacher from McAlester High School, some of his students asked him what he wanted to do next.

Scott told he wanted to reach for the stars.

"I'd said I'd like to discover a new planet," Scott said.

It may have seemed like an impossible dream — to anyone who doesn't know Phillip Scott, a previous McAlester Public Schools Teacher of the Year who built an observatory at McAlester High School.

A lifetime of keeping his eyes on the skies is now paying off in a big way.

Scott believes he has achieved his longtime goal and has discovered a  previously unknown exoplanet — an extrasolar planet outside our Solar System.

He said he discovered the new exoplanet at his own OKSky Observatory near Kiowa, using a 12.5 inch Newtonian telescope to measure changes in light when the planet passed in front of the star which serves as its sun.

Scott works with an international group called the Habitable Exoplanet Hunting Project. It's led by Albert Caballero, of Spain, who Scott said has  submitted the paperwork regarding the discovery to the Cornell University site known as arXiv.org. It's a repository of electronic preprints in math, physics astronomy and other fields and Scott said it's the first step in obtaining official recognition for the previously unknown exoplanet.

The discovery of a new exoplanet won't become official until all the information is reviewed by several professional astronomers, Scott said — but he's confident he and the Habitable Exoplanet Hunting Project have the data to back up the discovery. Three professionals astronomers helped the group with preparing what was required for submission to arXiv, which is pronounced "archive."

Scott said working with the group has been great — and he feels fortunate to have been the one to have detected the planet. It just happened to be him, Scott said.

So will the planet be named after Scott? It doesn't work that way, he said.

The exoplanet is orbiting a star — think of it as similar to our sun — called GJ 3470, Scott said. The new planet is being called GJ3470 c.

How was that determined?

"A is the star and b is a previously-found plant orbiting around this star," Scott said. The c, which naturally follows b, comes from the discovery of the new exoplanet.

Scott said the exoplanet is on a well-known constellation.

"It's in the constellation Cancer, the Crab," Scott said.

From earth, it can't be seen with the naked eye, or even with Scott's own powerful telescopes.

"Absolutely not," Scott said. He used the analogy of looking at a powerful searchlight from 10 miles away and trying to see a firefly that has landed on the rim. The distance is too great and the light is too bright, he said.

"The star is 100 light years away," Scott said. "It's orbit is such that it passes between us and the star." That's what led to the discovery of the new planet. When the planet passes between the star and the earth, there is a discernible dip in the star's brightness.

"That, I can measure," Scott said.

Each observation takes hours, he said. Exposures by camera are made throughout the night.

"The next day, I start analyzing it and then I will graph that light curve," Scott said. When the planet passes between earth and the star, the light curve is slightly less than 1 percent in the dip during the time when the planet is in front of the star."

When the planet passes from in front of the star, the light curve goes back up to normal," he said.

It's a hypothesis that Scott feels has been proven, because he can observe the light through a camera on his telescope.

"I have seen it three times," Scott said. Dec. 23 marked the first time, followed by a second observation on Feb. 27 — making it 66 days from one observation to the next.

"In science, we gather data and make predictions," Scott said. His prediction proved accurate when the cycle repeated itself on May 3.

"Each time was separated by 66 days," said Scott. "When that third transition came around, I was looking for it and Bingo! It showed," Scott said. "If it was the same planet, it would show up 66 days later and it did.

"That gave us a pretty good assurance, we were getting it nailed down."

Scott's made calculations regarding the size of the exoplanet he believes he's detected.

"It's a Saturn-like planet; it's slightly larger than Saturn," he said. Scott had hoped there might be water on the planet if it was a rocky planet, but if his calculations are correct, it's unlikely. Any liquid would either be frozen due to extreme cold or evaporated, due to extreme heat, Scott said, presenting a couple of examples.

Scott's wife, Caren Scott, is a retired science teacher from Kiowa Public Schools. They spend lots of time stargazing together, since her husband built his observatory in their back yard.

She said it's exciting that he has discovered a new exoplanet.

"I can't say I'm surprised though. That's just the way he is." She said her husband is "super-focused" when pursuing a goal he loves.

Phillip Scott has enjoyed working with the international team of amateur astronomers. Scott said it was his good fortune to be the one who made the discovery this time.

He gave the international group with which he works much credit for the project, which he said is "very complex."

"On my own, I could not have done it," Scott said. Now, that's he's convinced he's found a previously unknown exoplanet, he's not about to stop looking.

"It is my hope our team will have more discoveries confirmed in the near future," said Scott.