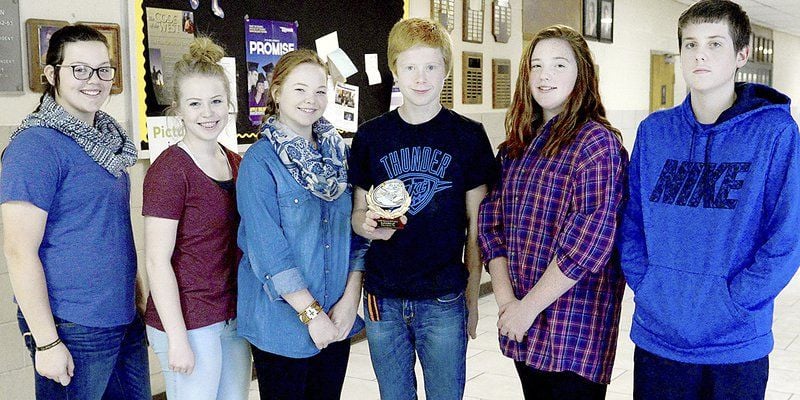 The Kiowa middle school academic team qualified in its division to advance as one of eight teams to the state academic tournament hosted at Oklahoma University in April. From left are, Karlie McKormick, Maggie Armstrong, Sydney Linscot, Tyton Wiseman, Audrey Johnston and Tray Goddard.

The Kiowa middle school academic team qualified in its division to advance as one of eight teams to the state academic tournament hosted at Oklahoma University in April. From left are, Karlie McKormick, Maggie Armstrong, Sydney Linscot, Tyton Wiseman, Audrey Johnston and Tray Goddard.

The gridiron, the hardwood, the diamond — all serve as arenas for competition among local students.

Why not test the academic mettle of our students as well? At Kiowa Public Schools, the middle school and high school academic teams are excelling this spring.

“My middle school academic team qualified in our division to advance as one of eight teams to the state academic tourney hosted at (Oklahoma University) in April,” Superintendent Rick Pool said. “Our high school students also attended East Central University and finished first place in the curriculum contest last week. Mrs. Cathy Tadlock does a great job and she supervises and coaches those teams that attend our academic events.”

Students attend these curriculum contests and compete in a variety of categories. Ten Kiowa students placed in 14 categories at the ECU competition.

Teagan Williams, a senior, placed first in the Shakespearean Verse Monologue. He performed Hamlet’s “To be or not to be” monologue from the play “Hamlet.”

“I’m really into memorizing long passages,” Williams said. “It’s the most famous Shakespearean monologue and it’s the longest (available for the competition) — they judge on length, accuracy. (You have to) take pauses at the correct time and (make) sure you aren’t monotonous.”

Williams is a four-year veteran of the academic team. Another senior and four-year participant, Braeten Anders, placed second in the trigonometry category.

“I’ve always been good at math and it comes naturally to me,” Anders said.

Students are chosen by teachers in specific subjects based on who they feel could best represent the school in each category, Tadlock said. As the high school trigonometry teacher, Tadlock herself nominated Anders for the competition.

If the category is not one taught specifically in school — the Shakespearean Verse Monologue competition for example — students are chosen based on skills and interests in those categories.

Braeten Anders was the only second-place finisher. However there were a slew of third place finishes for Kiowa students.

There are a couple more competitions for seniors Anders and Williams, but their performances in the curriculum contests are leading them down paths for future academic endeavors.

Williams said he is planning on attending East Central University after graduation and hopes to study the performing arts.

For Anders, the destination is still unclear as he hopes to secure a baseball scholarship, but wherever he goes he hopes to study accounting and finance.