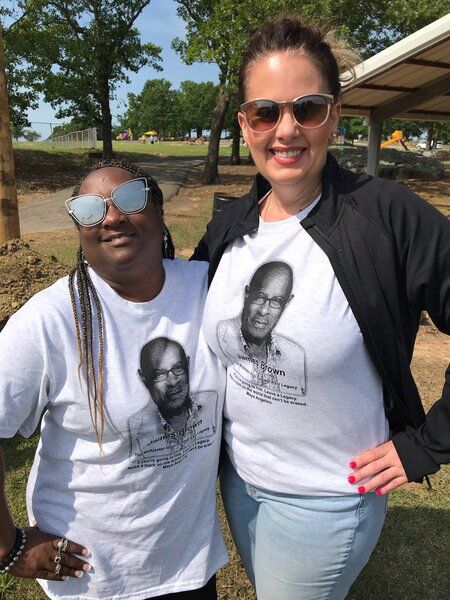 Rosalyn Jones, left, and Yvonne Allford, who are co-sponsors of the Afro Student Union at McAlester, wear special shirts designed to honor the legacy of the late James Brown. 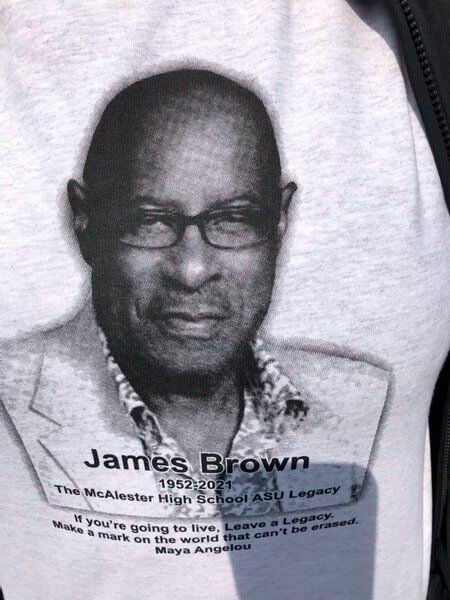 A special shirt honors the legacy of the late James Brown, who served as city councilor and vice mayor as well as an educator at McAlester Public Schools. 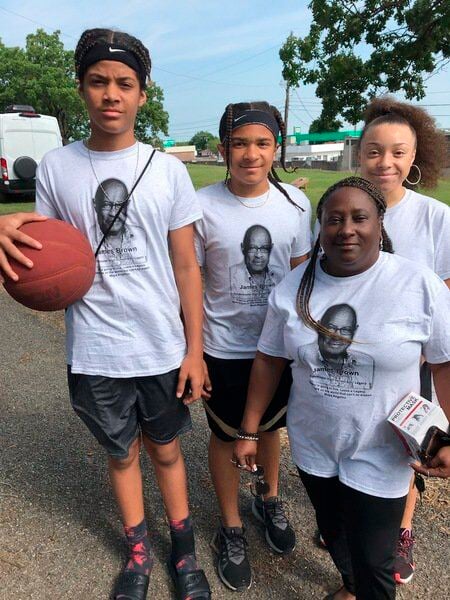 Rosalyn Jones, left, and Yvonne Allford, who are co-sponsors of the Afro Student Union at McAlester, wear special shirts designed to honor the legacy of the late James Brown.

A special shirt honors the legacy of the late James Brown, who served as city councilor and vice mayor as well as an educator at McAlester Public Schools.

Those who knew the late James Brown say he left a positive impact not only on the community he served as city councilor and vice mayor, but also on his students at McAlester Public Schools.

To help ensure his legacy continues, Brown is being honored with a special T-shirt designed in his honor.

Brown was serving as the McAlester vice mayor and Ward 4 Councilor when he died on Feb. 2, 2021, while being treated for complications from COVID-19.

He had earlier returned as a teacher to McAlester High School, after previously retiring as history and psychology instructor. In addition to his regular courses, Brown also had a tremendous impact at the school by organizing the Afro Student Union back in the 1970s and remaining heavily involved with the club during his career.

Rosalyn Jones, who along with Yvonne Allford is co-sponsor of the Afro Student Union, recalled how the idea for the shirt originated.

"We wanted to honor the legacy of James," said Jones, who served as an Afro Student Union co-sponsor with Brown once she joined MPS. Although the Afro Student Union began as a club for African American students, it eventually opened to all students at the school.

"We wanted the students to feel comfortable with diverse cultures," said Jones.

Following Brown's passing in February, Jones and others began thinking of a way to honor his legacy. Jones they settled on a T-shirt, and she worked with retired teacher Brenda Calahan to create the shirt's design.

It includes a quote from the poet Maya Angelou: "If you're going to live, Leave a legacy. Make a mark on the world that can't be erased."

Although shirts were originally designed for students, requests from school staff and others led to an expansion of plans to make the shirts more widely- available.

"We're going to start selling them in the fall," Jones said.

However, a limited supply is currently available. Regular sizes through large are $8, with the plus-sizes costing $10.

Jones said anyone interested in getting a shirt prior to the fall campaign can contact her at Key Academy, which is now inside the Eugene Fields School. The number is 918-423-4790, extension 2506.

"The money goes to our culture club to take the kids on field trips," Jones said.

Previous field trips have been  to the National Civic Rights Museum in Memphis, Tennessee and to Little Rock Central High School in Arkansas, where nine African American students who enrolled in the school in 1957 were blocked from entering the then-segregated school by then-Arkansas Gov. Orval Faubus, who called out the Arkansas National Guard.

Jones said a granddaughter of one of the students, known as the Little Rock Nine, is a teacher at the school and met with the McAlester students during their trip to Little Rock.

Afro Student Union members also take an annual trip to Langston University, the only historically-Black college in Oklahoma, from where both Jones and Moore graduated.

A soul food banquet is hosted by the club, where former members who have gone on to be successful have returned to meet and talk with students.

While the late James Brown had an impact on his students while living, he will continue his legacy now that he's gone, with sales of the shirts bearing his likeness helping fund future field trips for Afro Student Union members.

Brown, along with retired MPS educator Primus Moore, has also been recognized with an annual scholarship in their names.

"We honored Primus Moore and JB as legacy Black educators," Jones said, referring to the scholarship. "It's called the Brown-Moore Legacy Scholarship." Established in March 2020, Jones is glad Brown lived to see it founded. The first recipient, Anthony Pickney, is a nursing student, Jones said.

As for the quote from Maya Angelou about leaving "a mark on the world that can't be erased," Jones and others who knew Brown feel that's something he accomplished.

"If you have ever been infected with his character and his smile, it's something you will never forget," said Jones.