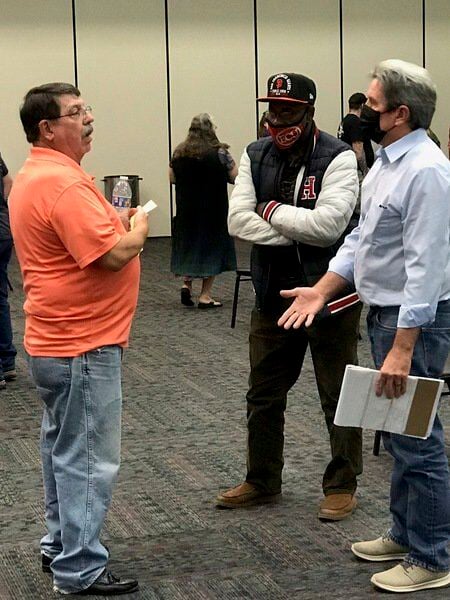 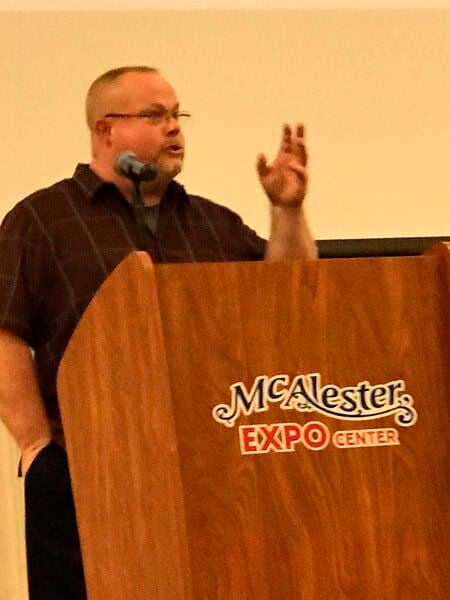 JAMES BEATY | Staff photoSkip Mitchell, hired as a consultant to work with a group who are critical of the McAlester City Council and Mayor John Browne, speaks to a group gathered at the McAlester Expo Center on Tuesday night. 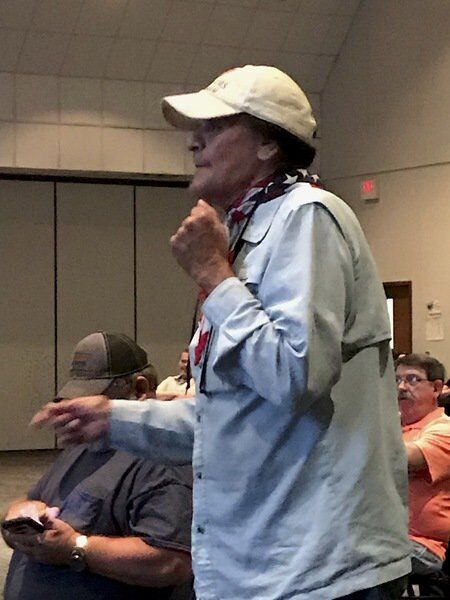 JAMES BEATY | Staff photoLester Wray, standing, makes a point during a meeting of a group called McAlester Unite that met Tuesday night at the Expo Center. Some members who attended were ready to move forward with plans to try and remove Mayor John Browne from office.

JAMES BEATY | Staff photoSkip Mitchell, hired as a consultant to work with a group who are critical of the McAlester City Council and Mayor John Browne, speaks to a group gathered at the McAlester Expo Center on Tuesday night.

JAMES BEATY | Staff photoLester Wray, standing, makes a point during a meeting of a group called McAlester Unite that met Tuesday night at the Expo Center. Some members who attended were ready to move forward with plans to try and remove Mayor John Browne from office.

Some of those attending a meeting held by a group calling itself McAlester Unites are ready to move forward with plans for a recall petition against Mayor John Browne.

As one of the initial steps, several individuals have already signed papers saying they will serve as committee members responsible for circulating petitions seeking a recall election for the McAlester mayor's post.

Several speakers directed criticism at the mayor and strongly voiced their dissatisfaction with the city's mandate requiring masks or other protective facial coverings be worn inside buildings of public gatherings where social distancing is not possible.

Browne did not address those at the meeting in an official capacity, but he did speak afterwards with some of those ready to seek his recall, including Harry Gibson, one of the first to support the recall movement.

Skip Mitchell, of Linsday, identified as representing the Forum Consulting Group, spoke from the podium while addressing those attending the McAlester Unites meeting. He maintained the attempt to get a recall election for  the mayor's post was not about the mask mandate.

"It's not about the masks," Mitchell said. "It's about overreach by government."

Despite Mitchell's comments, many of the complaints from those at the Expo Center revolved around the city's mandate to require the protective facial coverings during the ongoing COVID-19 pandemic.

Mitchell recommended a course of action.

"What I would do is encourage you to start and remove your mayor," Mitchell said. He also offered to bring in some attorneys from outside McAlester.

"We will bring in counsel from out-of-town to deal with it, if you chose to do this," Mitchell said.

"Grounds for recall should relate to and affect the administration of the official's office, and be of a substantial nature directly affecting the rights and interests of the public," the City Charter states.

McAlester's City Charter also states "Recall petitions must be signed by at least 25% of the total number of votes cast for governor in the city or ward at the last general state election at which a governor was elected."

That would be the Nov. 8, 2018 General Election when Gov. Kevin Stitt won the governor's race.

Pittsburg County Election Board Secretary Tonya Barnes said Wednesday that 6,692 ballots were cast inside McAlester city limits in the 2018 gubernatorial election. Twenty-five percent of the 6,692 ballots cast is 1,673 — the number of signatures required on a petition to recall Mayor Browne, based on the numbers provided by the election board.

"If the masks are effective, why aren't all the councilmen at the meetings?" asked Shannon Rowell — a reference to those city councilors who have been remotely participating in city council meetings by teleconference, as opposed to in-person at City Hall.

Ben Kennedy contended that by allowing councilors to attend city council meeting by teleconference, with audio but with no video, the city council had not followed the state's Open Meeting Act.

However, the Oklahoma State Legislature passed a bipartisan bill in March to revise the state's Open Meeting Act due to the COVID-19  ongoing pandemic, and Gov. Kevin Stitt signed the measure into law. The revised version of the Open Meeting Act is set to remain in effect until Nov. 15, although there has been talk of extending it.

Teleconferencing is addressed in Senate Bill 661, the revised version of the Open Meeting Act signed into law by Gov. Stitt.

Another section of Senate Bill 661 states "A public body may hold meetings by teleconference or videoconference if each member of the public body is audible or visible to each other and the public.." The statute goes on to state that "if the meeting is held using either teleconference or videoconference capabilities, and at any time the audio connection is disconnected, the meeting shall be stopped and reconvened once the audio connection is restored."

That has occurred several times during city council meetings in which some members have participated by teleconference. Meetings were halted until audio connections were reestablished.

Mayor Browne maintained Wednesday that allegations the city council had violated the Open Meeting Act by having only audio connections with no video amounted to misinformation.

He noted that the version of the Open Meeting Act currently in effect in Oklahoma as a result of the pandemic allows for teleconferencing or videoconferencing with audio and/or video, but does not require both under the teleconferencing requirements.

Speakers at the Tuesday night event also expressed their frustration over a citizens petition filed at City Hall calling for a referendum election to overthrow the city's so-called masked mandate that had passed on July 23. Citizens had filed their petition at City Hall on Thursday, Aug. 20 — the same day the City Council passed a new version of the so-called masked mandate to remove a $100 fine on individuals who violate it. A $100 fine remained in place on business owners or others who allow violations inside their businesses or other facilities.

Several criticized the city officials for taking no action on the citizen's petition filed Aug. 20, saying if they'd done so "we wouldn't be here today."

Browne maintained Wednesday that City Attorney Joe Ervin determined the measure striking the $100 fine on individuals for violating the protective face coverings requirements the council passed on Aug. 20 was a new ordinance — not an amendment to the previous July 23 ordinance addressed by the citizens' petition filed Aug. 20. Mayor Browne maintains that made the matter moot, because the city ordinance addressed by the Aug. 20 city petition was overturned.