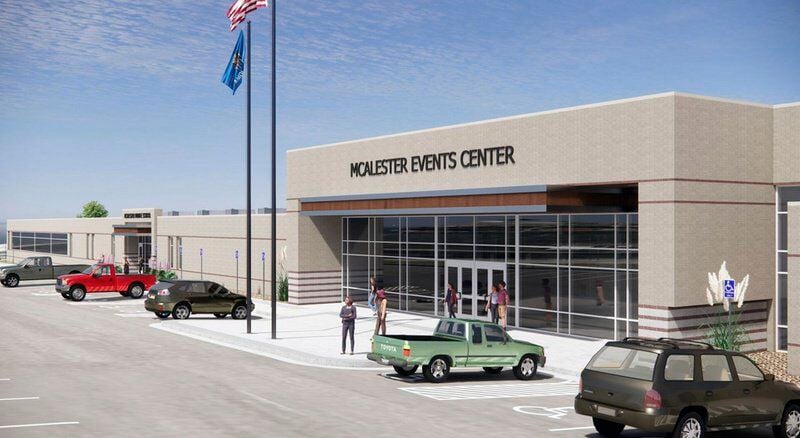 Construction on a new middle school and event center in McAlester is starting soon.

Josh Jacox, with Crossland Construction Company, said construction at the site of a new multi-million-dollar facility approved by McAlester Public Schools voters could happen in late November — with completion of the site expected May 2023.

“We’re looking forward to building this facility,” Jacox told MPS Board of Education members at a meeting.

“This is exciting for our school and I’m proud too be part of moving our district forward,” MPS Board President Joy Tribbey said.

MPS Superintendent Randy Hughes said a groundbreaking ceremony is set for Dec. 13 on the new multi-level facility to be constructed on the hill between the existing high school and East Van Buren Avenue. It would be the district’s newest main facility since the current high school was built in 1979 and received additions in 1994 and 2006.

Nearly 80% of voters in the MPS district approved a $34.9 million bond initiative in February to go toward the project — which will add classrooms, labs, a new event center that doubles as a storm shelter, and more for nearly 800 students in grades 7-12. The bond proposition extended two previous measures that brought an 8% tax increase in 2019, but did not lead to a tax increase.

Board members previously named Crossland Construction Company as the construction manager and Jacox leads the project.

Jacox told board members construction could start Nov. 30 and construction is expected to be completed by May 2023.

The project bids came in at $27.2321 million — which is more than the $27 million available from the bond approved by voters — but plans include a contingency of $800,000 in the projected cost.

Officials said they anticipated higher costs in steel and other materials, so they asked for the Oklahoma State Department of Education to purchase the facility’s HVAC with $2 million in federal funds from ESSER III. The request was approved and its set to assist MPS with the total cost.

“But we’ll be taking antacids until it’s done,” Hughes said, referring to stress of the project’s budget crunch. “We feel good about it, but you never know.”

The new building brings new plans for the district’s other facilities that leaves the locations of several in question.

Hughes said the plan is to leave Eugene Field as the facility for alternative education and the nutrition department.

He said the building worked well for both departments and the James Singleton, the MPS alternative education director, has done an outstanding job.

Singleton said 33 of 45 alternative education students are close to the current facility and he hopes to continue serving them at Eugene Field.