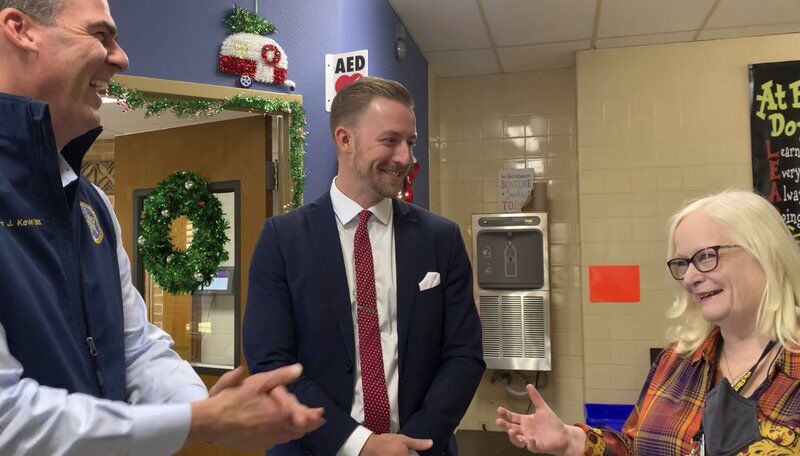 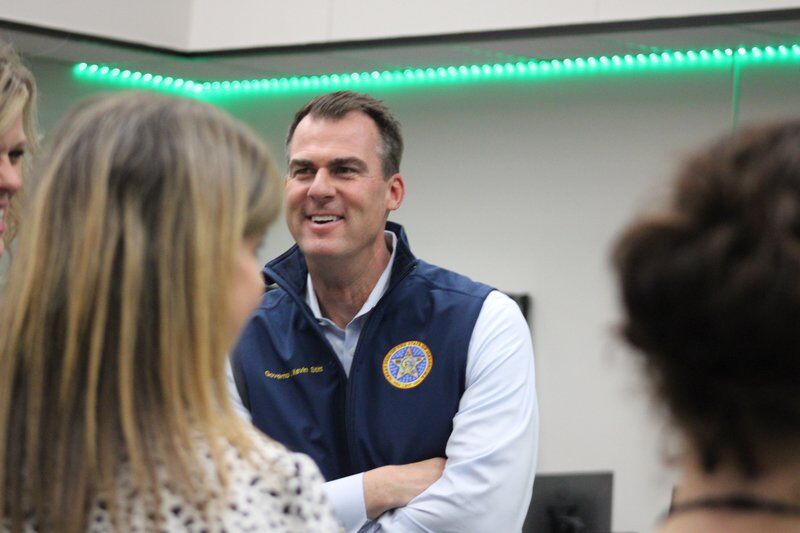 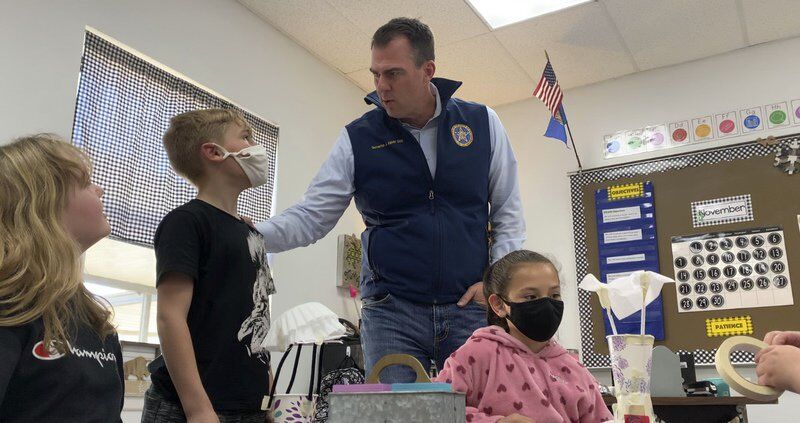 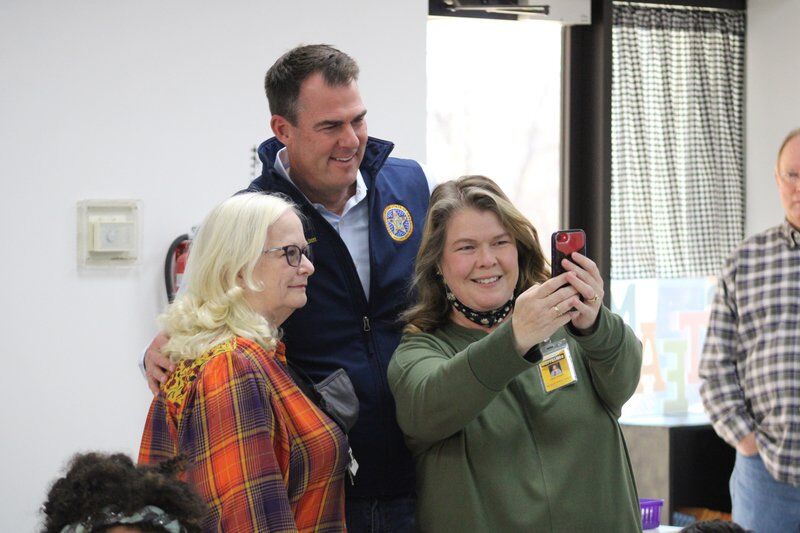 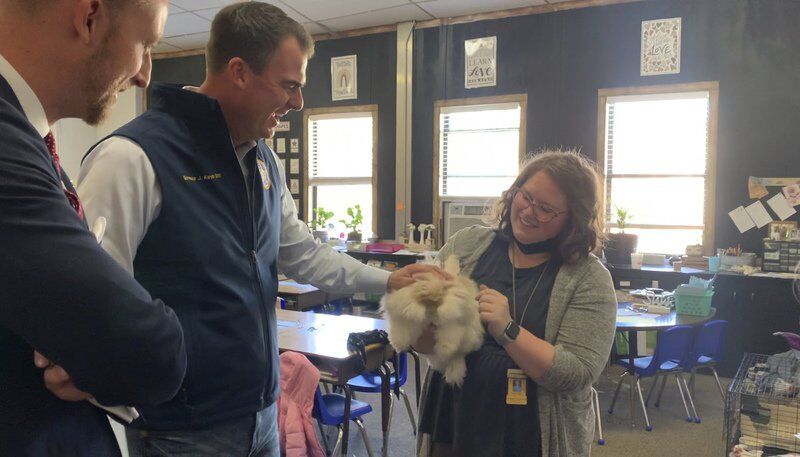 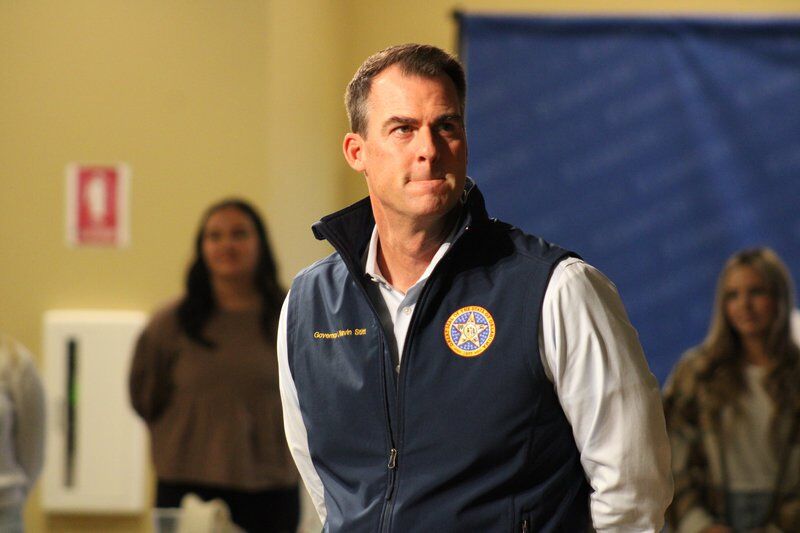 Kathy Hunt said her school’s awards are a product of teachers investing in students.

The principal at McAlester’s Edmond Doyle Elementary said she believes the campus was named a National Blue Ribbon School for a second time because of dedication from the teachers to connect with students. She spoke about the school’s success with Oklahoma Gov. Kevin Stitt and Secretary of Education Ryan Walters, who toured the campus Tuesday and recognized Hunt and teachers for their part in earning the national honor.

Hunt said the formula for success boils down to teachers fostering relationships with students.

“I think more than anything, I just want them to feel loved,” Hunt said.

The National Blue Ribbon Schools Program is in its 38th year and recognizes outstanding schools for their excellence and for closing subgroup achievement gaps. Edmond Doyle was recognized in 2014 under Hunt and was among six Oklahoma schools honored this year through the program.

Edmond Doyle is a Title I school with students consistently excelling in academics. The school received an overall A on each Oklahoma State Department of Education report card from 2012 to until it was eliminated for the 2020-2021 academic year.

Technology also helps as each student receiving an iPad or a Chromebook — with Tech Tuesdays implemented regularly since the start of the COVID-19 pandemic in case the school needs to transition to distance learning.

Edmond Doyle focuses on its STEAM program to teach career skills to students and is a Monarch Waystation, with students and staff feeding and observing monarch butterflies on their migration to Mexico.

“It’s a lot of work and a lot of extra things like picking people up to make sure they get to school, and making sure people have gas to get students to school, and things like that,” Hunt told Stitt and Walters during a tour — adding that teachers take a no-nonsense approach.

“She’s definitely no-nonsense,” said Walters, who attended McAlester Public Schools and graduated from the district in 2004.

“My motto is ‘we work hard, we play hard,’” Hunt said with a laugh.

Stitt and Walters toured the campus, taking time to ask Hunt about how to help students and schools in low-income areas excel in academics.

Hunt told the state leaders that vocabulary for the youngest students is crucial — and reiterated building relationships with students.

Walters, who also teaches AP history classes while running for the state’s superintendent position, said he benefited from teachers at McAlester schools holding him to high standards.

“When I look at some of my favorite teachers growing up, they were ones that were pretty hard on me,” Walters said with a smile.

Parker Intermediate Center Principal Jamie Price and teachers spoke with the state officials about their students’ success and teaching strategies. Several thanked Hunt for her guidance throughout the years.

She started teaching fourth graders at McAlester in 1981 before becoming an art teacher, a teacher and principal at Parker Intermediate Center, principal at Edmond Doyle, and two years as a principal at William Gay Early Childhood Center before returning to Edmond Doyle.

Hunt was one of eight principals nationwide to receive the Terrell H. Bell award in 2014.

Betty Drake, 65, of Savanna, died Wednesday, Jan. 26. Viewing and family visitation will be Sunday from 2:00 to 4:00 p.m. at Brumley-Mills Funeral Home. Funeral services will be Monday, Jan. 31, at 10:00 a.m. at the Kiowa Baptist Church. Burial will follow at Savanna Cemetery.

Nathan Craig Thompson, 41, of Sapulpa, OK passed away at the St. Francis Hospital in Tulsa, OK. Services will be on Tuesday, February 1, 2022 at 2 pm at the Waldrop Funeral Home Chapel with Cremation to follow. Officiating will be Rev. Larry Mays. Services are under the direction of the Wald…

Eleanor Joy Miller, 79, of Wilburton, OK passed away at the McAlester Regional Hospital in McAlester, Oklahoma. Services are set for a later date at this time. Services are under the direction of the Waldrop Funeral Home of Wilburton.