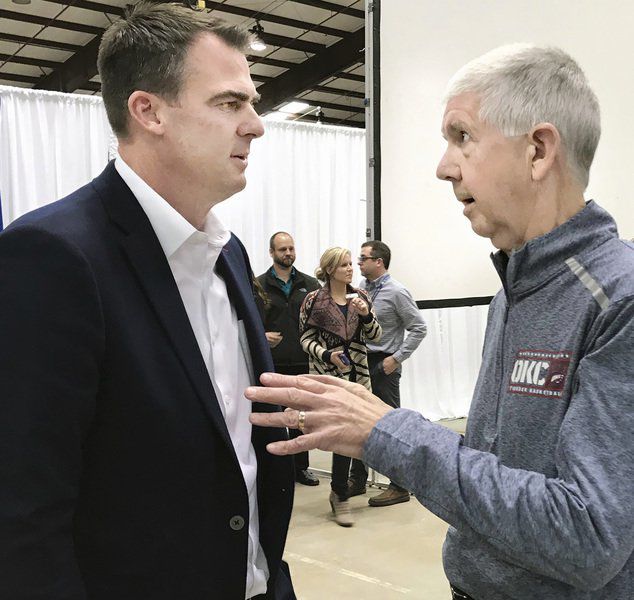 KEVIN HARVISON | Staff photoOklahoma Gov. Kevin Stitt, left, listens as Oklahoma Supreme Court Justice (retired) Steven Taylor speaks with Stitt during the governor's Top Ten Cabinet Tour in McAlester held Thursday at the Expo Center. Taylor, who on the State Board of Higher Regents, served an chairman of the Department of Public Safety for Stitt during the governor's transition into office. 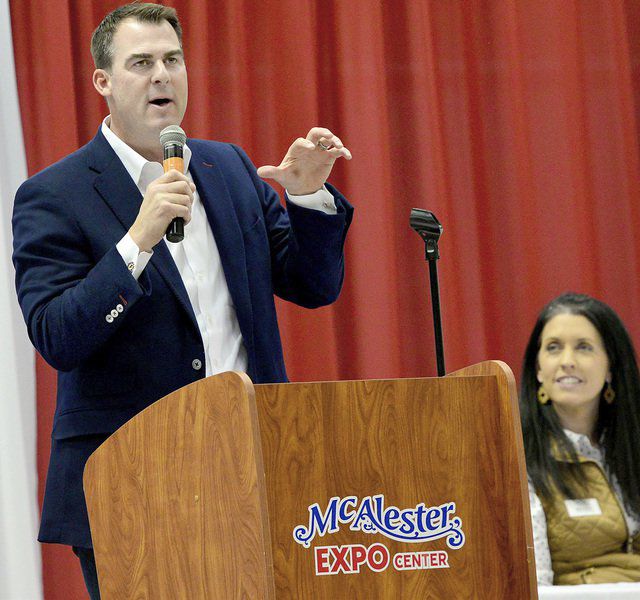 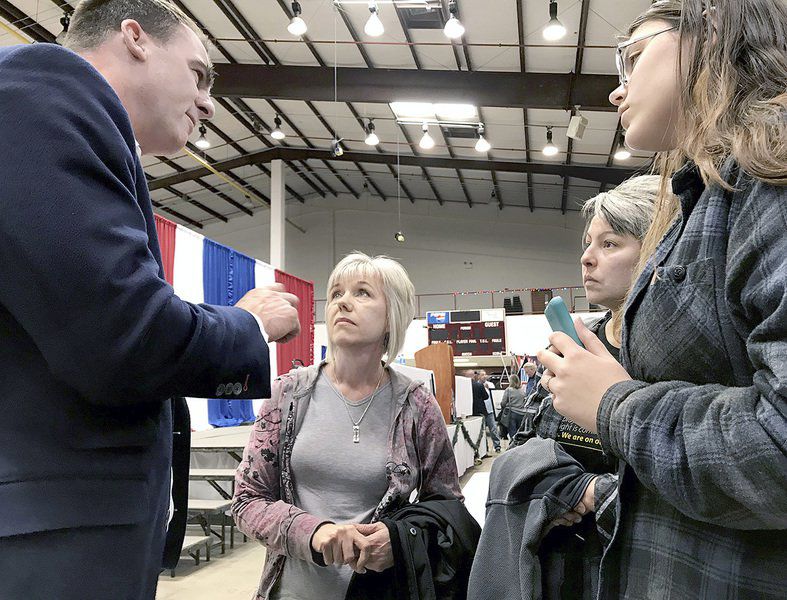 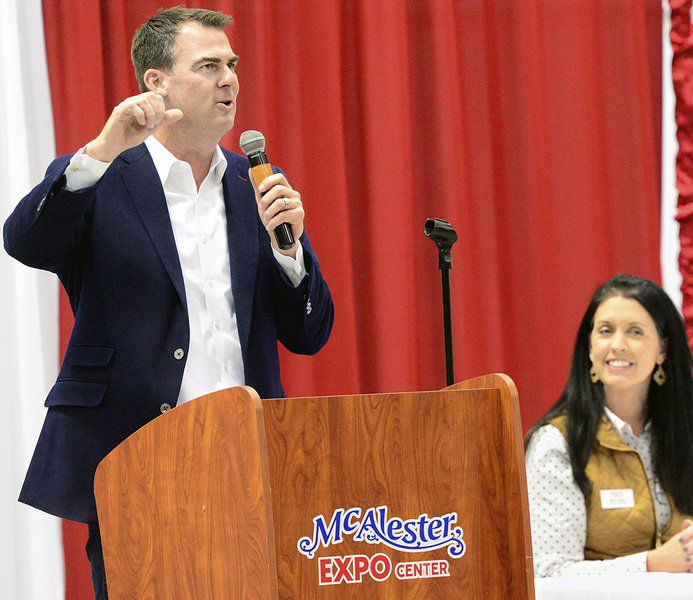 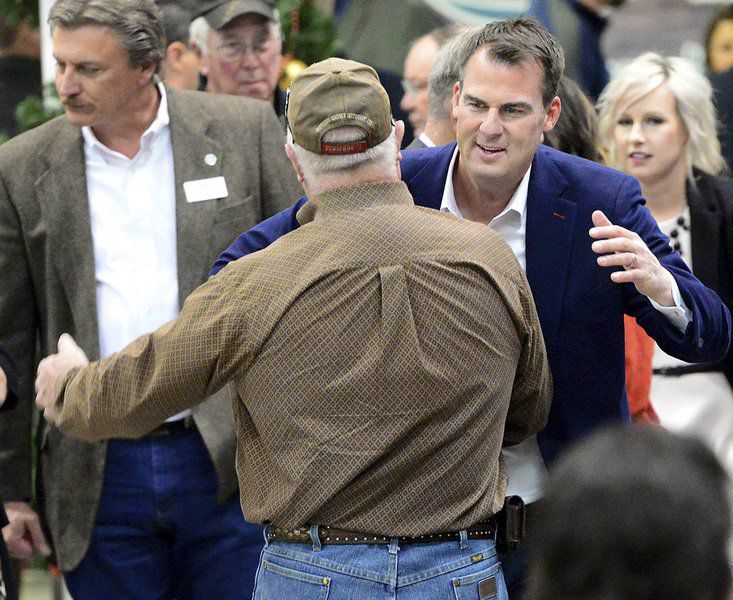 KEVIN HARVISON | Staff photoOklahoma Governor Kevin Stitt makes his way to the podium before speaking at the McAlester Expo Center on Thursday.

KEVIN HARVISON | Staff photoOklahoma Gov. Kevin Stitt, left, listens as Oklahoma Supreme Court Justice (retired) Steven Taylor speaks with Stitt during the governor's Top Ten Cabinet Tour in McAlester held Thursday at the Expo Center. Taylor, who on the State Board of Higher Regents, served an chairman of the Department of Public Safety for Stitt during the governor's transition into office.

KEVIN HARVISON | Staff photoOklahoma Governor Kevin Stitt makes his way to the podium before speaking at the McAlester Expo Center on Thursday.

Oklahoma Gov. Kevin Stitt brought his Top Ten Cabinet Tour to McAlester, where he and members of his cabinet addressed a crowd from a stage at the Expo Center.

Afterwards, the governor and more cabinet members stuck around to meet and talk with local residents.

Stitt said he's holding cabinet meetings across the state to get cabinet members away from the state Capitol.

"The purpose of our Top Ten Tour is to get out of Oklahoma City," Stitt said.

"This was one of my favorite stops on the campaign trail," the governor said. He said when he decided to conduct the Top Ten Tour, "I certainly wanted to include McAlester."

Following his address, Stitt said cabinet meetings away from the Capitol are also used for information-gathering purposes — giving him and the staff a chance to hear concerns of Oklahomans across the state.

What will he and his cabinet do with the information they gather in McAlester?

"It helps drive policy on next year's session," Stitt said, referring to the next legislative session that begins in February 2020.

The visits also give him and the cabinet a chance to be with local legislators in their home districts, he said.

Following the event, the News-Capital also asked the governor if there is anything new in the dispute between his office and the total 31 Native American tribes in the state operating Class III games under the federal India Gaming Regulatory Act.

Choctaw Nation of Oklahoma Chief Gary Batton said in a previous interview that he and other tribal leaders disagree with the governor's interpretation of what will occur when the current contract agreement expires on Jan. 1, 2020, if a new compact agreement is not negotiated and signed.

Batton and other tribal leaders contend the current gaming contract will automatically renew if a new agreement is not reached, but he said the governor has let them know he disagrees.

Stitt said he's trying to represent the interests of 4 million Oklahomans and he will not favor one industry over another.

"I will do what's best for Oklahoma," he said. The governor said he would address the issue further through a news conference later that day.

Joining Stitt on the stage at the Expo Center were Secretary of Public Safety Chip Keating; Secretary of Agriculture Blayne Arthur, Secretary of Veterans Affairs and the Military Ben Robinson, and Secretary of Commerce and Workforce Development Sean Kouplen.

The governor said it's important to hear from Oklahomans across the state.

"We've got to think about people in McAlester, people in Jenks, people in Norman, people in Guymon," the governor said.

Stitt spoke of what he considers some of the advances he's made on behalf of the state since taking office.

The governor said he had not been in office long before he decided to go visit the Oklahoma Department of Education.

Even though he said it's across the street from the Capitol, Stitt said he was told he's the first governor to come by the department since 1991 — and prior to that, the only other visit was during the building's dedication in 1991.

Stitt said when he took office "I found I did not have the authority to run the agencies." He compared that to a football coach who could not choose his own coordinators.

Following some legislative action, "We were able to plug a new leader in at the Department of Human Services," he said. Stitt said the new agency chief eliminated about 400 positions and found $10 million in his budget, to the state's benefit.

The governor also spoke of the recent mass commutations of prison sentences he approved for those convicted of drug offenses or thefts below a certain threshold that had been approved by voters in the state.

"We had a big, big commutation several weeks ago," he said. "All this did was bring the current law up to the Department of Corrections."

Stitt also spoke of the challenges facing inmates upon release, with many of them lacking something as simple as a drivers license that's often needed to be employed. Stitt got the Oklahoma Department of Public Safety involved.

"We bought the DPS for the first time to help people get a drivers license," he said.

He also spoke of learning that upon taking office as governor there were restraints on budgetary actions regarding items such as federal funds.

"Before, we could only talk about 40 percent of the budget," he said. "I wanted to talk about the entire budget."

The governor also spoke of special savings account his administration has set up for the state and actions on behalf of state employees.

"We gave all state employees a raise for the second year in a row," he said, specifically mentioning Oklahoma Department of Corrections employees and school teachers.

"Our wonderful school teachers got a raise for the second year in a row," he said.

"For the first time ever, we have fully-funded ODOT's eight-year roads and bridges program," he said, referring to the long-range plans of the Oklahoma Department of Transportation.

Stitt said he's proud to be an American and so glad to have been be raised in Oklahoma.

McAlester is the fourth city on the governor's Top Ten Cabinet Tour. Previous cities on the tour included Woodward, Owasso and Lawton.