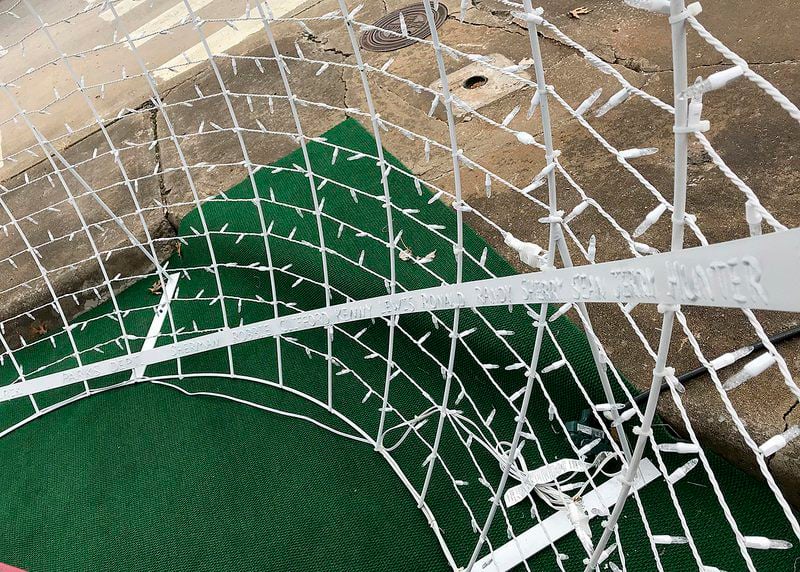 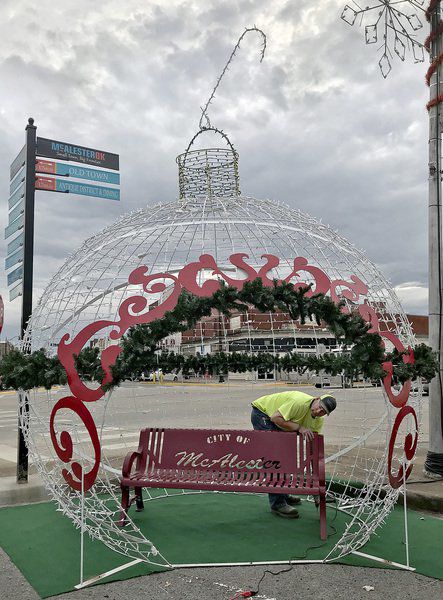 KEVIN HARVISON | Staff photoCity of McAlester Head Gardener drives a screw into the base of a bench inside a huge Christmas tree ornament in the Farmers Market parking lot at South Main Street and Choctaw Avenue. City employees worked together to create the walk-in ornament and to have it installed in time for the Dec. 5 Downtown Christmas Parade. 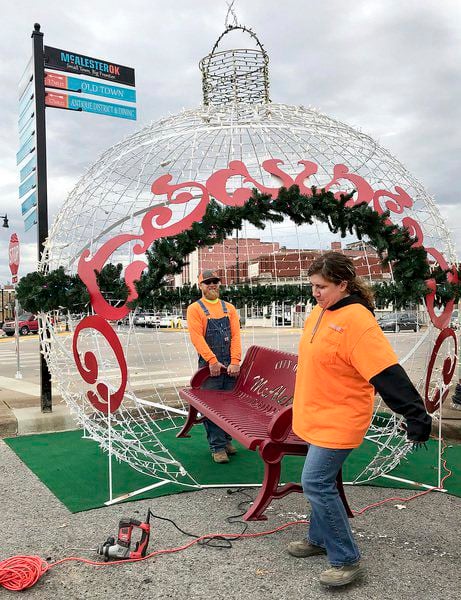 KEVIN HARVISON | Staff photoCity of McAlester Head Gardener drives a screw into the base of a bench inside a huge Christmas tree ornament in the Farmers Market parking lot at South Main Street and Choctaw Avenue. City employees worked together to create the walk-in ornament and to have it installed in time for the Dec. 5 Downtown Christmas Parade.

McAlester city employees wanted to do something huge for Downtown McAlester this Christmas.

They came through in a big way.

The result of their efforts is in place in the Farmers Market parking lot near the intersection of South Main Street and Choctaw Avenue — a gigantic Christmas tree ornament in the form of a steel sculpture. It's so large that one can step inside it, sit on a bench or walk around as the fancy strikes.

One of the best parts, as far as employees are concerned, is it's in place in plenty of time for next week's Dec. 5 Downtown Christmas Parade.

How big is it?

"It's 12 feet tall," said McAlester Head Gardener Robbie Patton, one of the driving forces behind the work that led to the ornament's creation.

"That's not counting the hook on top, which is about another four feet," Patton said. He said the ornament is also 12 feet wide, to make the circle complete.

Patton said McAlester city employees, as well as some local residents, worked together to create the big ornament themselves after learning that buying a manufactured would be cost-prohibitive — by several thousand dollars. After spotting one in a catalog, Patton became convinced city employees could make one themselves and save the city lots of money during the process.

He told city of McAlester Land Maintenance Supervisor Sherman Miller of his idea.

"I told Sherman we could build it," Patton said. "We decided we were going to build it as a surprise."

They started to work in the Parks Department building, trying to maintain the project's secrecy. Patton said city employees worked on the the ornament when they could, such as on rainy days.

"We worked on it in our spare time," Patton said.

However, it's not easy to keep a 12-feet-tall Christmas tree ornament under wraps. Occasionally, other city employees or members of the public would have a reason to drop by the Parks building, where they would spot the gargantuan work-in-progress. Patton said the usual reaction was along the lines of "what the heck is that?"

In addition to work on the big ball that makes up the bulk of the ornament, others assisted with another part of the project. City employee Johnny Wright drew some plans for the scroll work on the ornament, Patton said.

"We took it to David Weeks, a mechanic as the sewer plant," said Patton said. Weeks had the equipment and expertise to cut the metal scrolling.

Dennison Cable at Standard Machine provided a valuable part in the ornament's creation. City of McAlester Groundskeeper Cody Conner also did a lot of the work.

A number of others helped, including some Jackie Brannon Correction Center inmates. Names of all of those who assisted with the project are emblazoned on the steel inside the ornament.

What did Patton and the other city employees hope to accomplish through their endeavors to create the huge ornament?

"It's just something for the citizens," Patton said. "They can come and take pictures."

City employees were still working Tuesday and Wednesday on some supplements designed to enhance the photographic experience.

"We're working on some signs," Patton said. One of the three signs employees planned to place inside the ornament reads "Merry" while another will read "Christmas" and the last one adds "Ho, ho, ho."

Something else in the works as well.

"We're also going to have a hashtag," Patton said, but one has yet to be selected. He noted those who take pictures at the ornament can act on their own to have the photos made into Christmas cards or other items with the ornament's image.

"Merry Christmas from the city of McAlester," Patton said. "We hope everybody enjoys it."