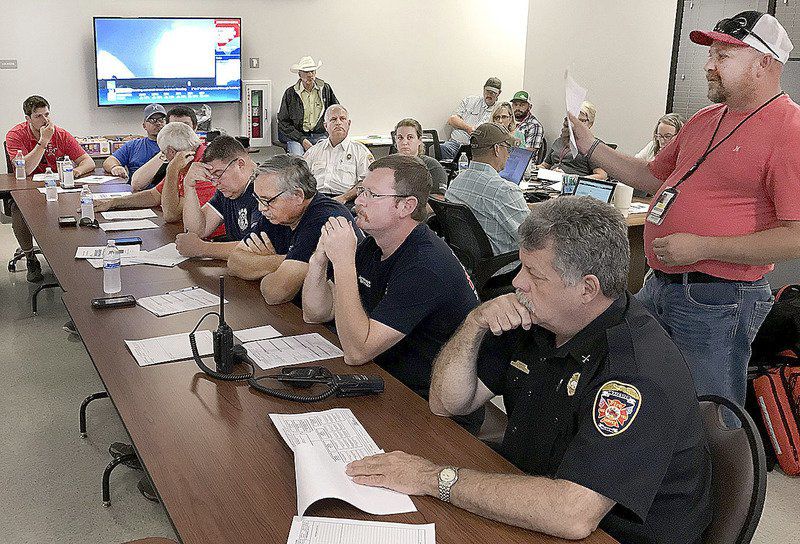 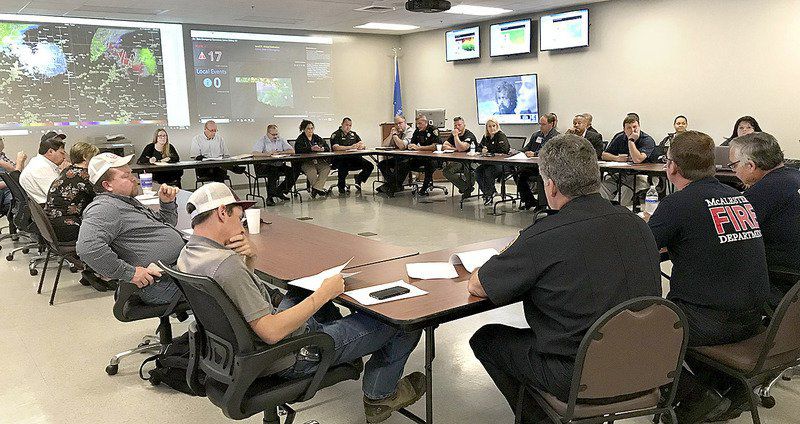 Approximately 45 emergency responders met at the Pittsburg County Office of Emergency Management early Monday to prepare for the possibility of severe weather striking the McAlester area from Monday through Tuesday.

During the Level 2 meeting, they were told to prepare for the possibility of tornadic activity, strong straight-line winds, flooding and other severe weather. A Level 2 meeting means multiple local and area agencies are involved in the preparations, said McAlester/Pittsburg County Office of Emergency Management Director Kevin Enloe.

Enloe said the National Weather Service had advised that the possibility for the timing for the onset of severe weather in the Pittsburg County area ranged from Monday afternoon through Tuesday.

He urged everyone to be prepared to remain vigilante Monday and overnight through Tuesday — although he noted that the predictions of when and where the storms could hit has been evolving as the day's weather conditions unfold.

Enloe said the entire state of Oklahoma has been warned to be on the alert for catastrophic weather issues on Monday through a portion of Tuesday, including the overnight hours.

Some officials were told earlier they should remain vigilant, even if the big clusters of thunderstorms bypass McAlester, because conditions exist for isolated tornadoes to pop up outside of thunderstorm clusters.

McAlester Fire Chief Brett Brewer told the group of emergency responders they should remain aware. Even if one storm system passes through, another could be on the way.

"It's going to be coming in waves," he said.

Enloe told the group all decisions in the case of a weather disaster will be made by a unified team including the Office of Emergency Management, the county, the city, law enforcement and fire officials.

"This is a unified command center," Enloe said. It's not one person running the show, he said.

Key members of group were to continue meeting to determine staging areas for emergency responders — with the possibility that those could change depending on where and when any needs might be.

They were preparing for the possibility of dealing with everything from mass casualties to mass feeding areas — although they were hoping none of it would be necessary.

One of the responders asked about public storm shelters.

Enloe asked Stasiak to correct him if he's wrong, but said the city has identified the Fire Station at Kinkead Hills and the Old McAlester High School, on Adams Avenue between Second and Third Streets, as designated shelters. Enloe said those have been presented to the public as designated shelters in the city.

Enloe also said no one should rely on storm sirens as a warning for severe weather, but should use other technology, including phone APPS and weather radios.

Enloe said registered shelter sites are among the first places checked following severe tornadic or straight line wind weather, to make sure a tree has not fallen over the shelter door, leaving those inside trapped.

He told city and county officials to keep track of all overtime that might be required due to the stormy weather as well as  the damage that occurs. It will be important in getting reimbursed later, he said.

Enloe said there's no way of knowing how many, or if any, of the emergency responses planned for Monday will be necessary to implement in McAlester or Pittsburg County.

"Is this necessary? I don't know," Enloe said. "I'm telling you what the National Weather Service tells us to plan for.

"If we do this and all we get is a few drops of rain, it's a good training session. Prepare for the worst and hope for the best."