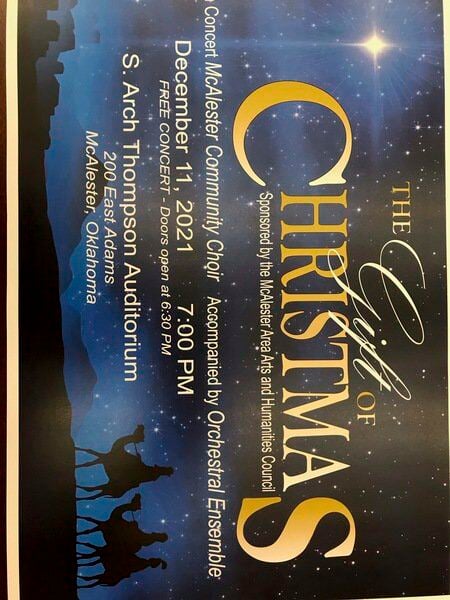 The Community Christmas Choir and Orchestra is once again ready to present a free concert at S. Arch Thompson Auditorium in McAlester. 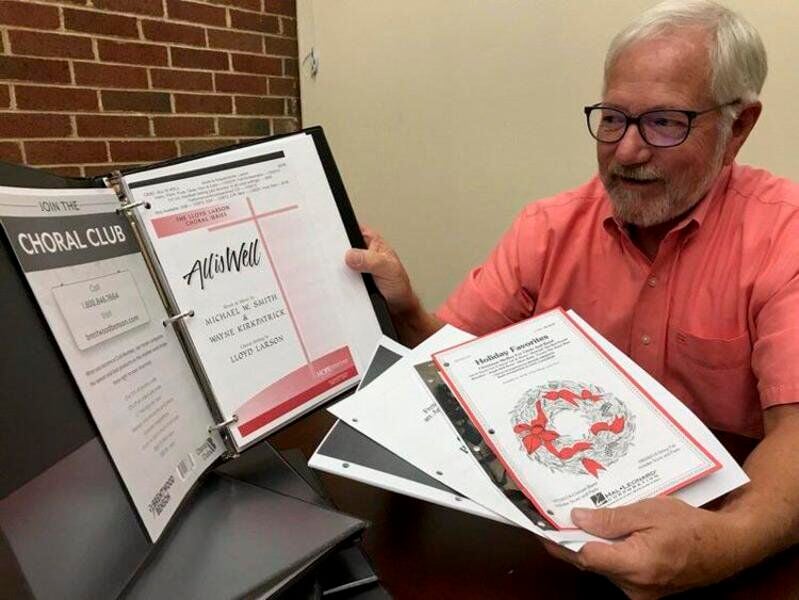 JAMES BEATY | Staff photoRodney "Maestro" Briggs shows a few of the selections for this year's Community Christmas Concert. It's set for 7 p.m. on Dec. 11 at S. Arch Thompson Auditorium in McAlester.

The Community Christmas Choir and Orchestra is once again ready to present a free concert at S. Arch Thompson Auditorium in McAlester.

JAMES BEATY | Staff photoRodney "Maestro" Briggs shows a few of the selections for this year's Community Christmas Concert. It's set for 7 p.m. on Dec. 11 at S. Arch Thompson Auditorium in McAlester.

They had to pause in 2020 — but this year's Community Christmas Concert is ready to return in force with its full orchestra and chorus.

This year's 2021 McAlester Arts and Humanities Community Christmas Concert is set for 7 p.m. on Saturday, Dec. 11, at S. Arch Thompson Auditorium in McAlester, with the fitting theme of "The Gift of Christmas."

It's a fitting theme because the free concert is presented with no admission to everyone who wants to attend.

Rodney "Maestro" Briggs is once more conducting the Community Christmas Concert's choir and orchestra.He's more than ready to bring back the event after COVID-19 concerns resulted in the cancellation of last year's concert.

Weekly rehearsals began Oct. 1 with an orientation gathering for singers to pick up the music at First Christian Church, 920 E. Central Ave. in McAlester. That initial gathering included a practice session for first and second sopranos only. following the orientation

"I think the anticipation is everyone's ready to get back to something normal," Briggs said. "To me, this will make the Christmas season more normal."

With musicians for a 16-piece orchestra already booked, Briggs traditionally tries to  60-70 singers in the choir.

Following that first session, sessions were held for altos Sept. 20, with a practice session for bass and tenor singers only held Sept.27. Starting Oct. singers will meet every Monday night for practice and were to continue up until the concert.

Anyone participating in the Community Christmas Concert Choir did not have to signup in advance or audition prior to the practice sessions beginning.

"Don't signup — just show up," Briggs said at the time. Those who missed the initial signup periods could still show up at any of the first three practice sessions held in September and still participate.

Separate practice sessions were partially put in place because of COVID-19 concerns, but Briggs also  wanted to work with each group of singers individually before they all joined together in October for the group sessions. He said it helped to take one section at a time, since they got started late this year due to COVID-19 concerns.

Community Christmas Concert organizers ultimately decided to move forward with the event with the hopes of bringing some Christmas cheer to the community.

Singers were required to pay $39 for the notated concert music — unless they join the McAlester Arts and Humanities, which costs $30 for an annual membership. If they did so, the Arts and Humanities provided for their music, covered by the $30 membership fee, Briggs said.

Briggs said singers who do not sing from notated music should not be concerned, since the music package includes a practice CD and singers get familiar  the music by singing with the choir during the practice sessions.

It not only benefits the community, it's rewarding to those onstage as well, from Briggs view in conducting the choir and orchestra for the  Christmas event.

"Singers and musicians can express themselves publicly," Briggs said shortly before the first rehearsals were to begin. "Everyone's excited I've talked to."