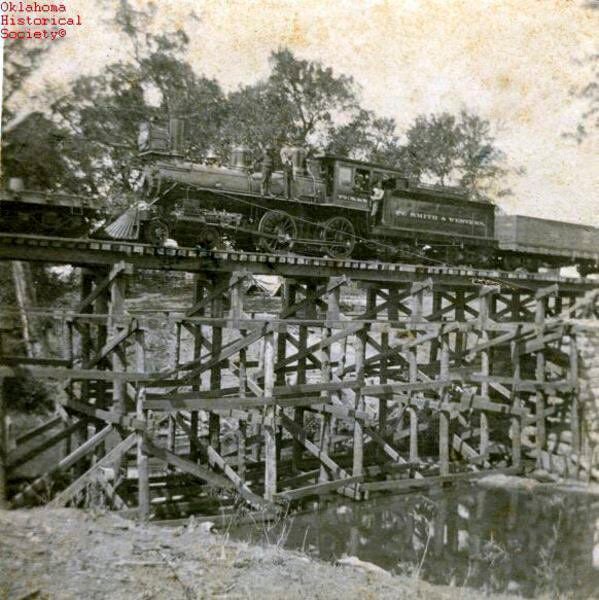 Fort Smith and Western locomotive crossing one of the 190 wooden bridges along the road. (Permission Oklahoma Historical Society) 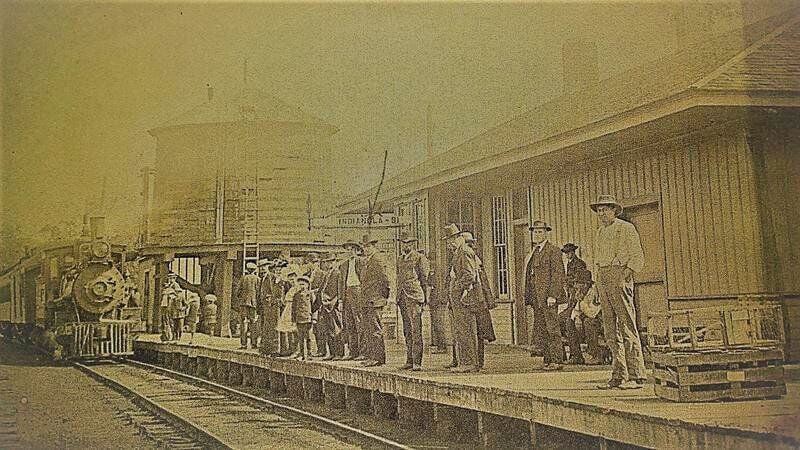 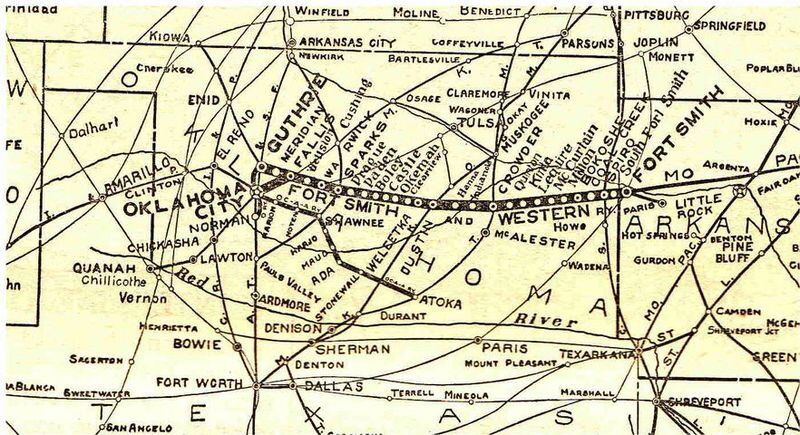 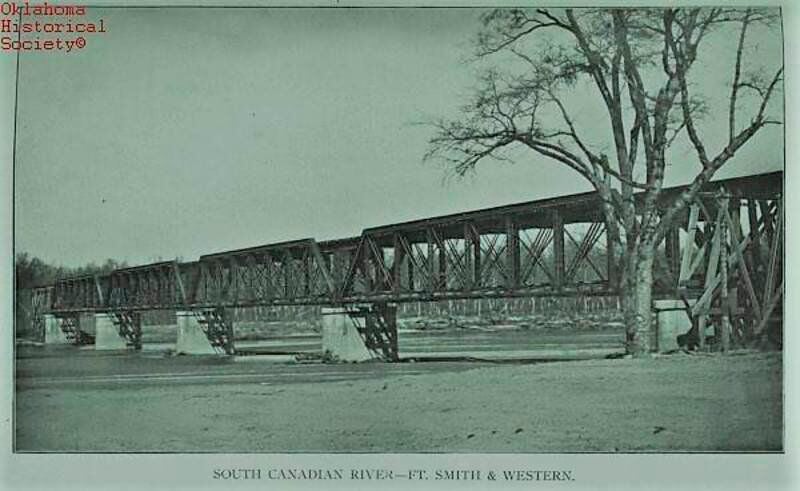 Fort Smith and Western locomotive crossing one of the 190 wooden bridges along the road. (Permission Oklahoma Historical Society)

The Fort Smith and Western Railroad was granted a charter on January 25, 1899. The line began as a coal and coke hauler, later adding grain, oil, lumber, livestock, sand and gravel, iron and steel, and cotton to its manifests.

The proposed route was nearly parallel to the Kansas City Southern right of way, so a mile of track was laid from the FS&W Depot and office in Fort Smith,

Arkansas to link with the KC Southern. Officials of the two roads worked out an agreement whereby the FS&W could operate trains over the KC Southern rails for about $20,000 per year. This would include 20 miles of track extending southwest from Fort Smith across the Poteau River through Spiro, Oklahoma, to Coal Creek. By July 10, 1908, the road was complete for 217 miles from Fort Smith to Guthrie.

The 1916 official guide of the FS&W lists the following stations along the railroad from east to west:

Along the way, the FS&W crossed, and interchanged with a lot of other railroads. These are the connections

In the autumn of 1906, a bumper crop of cotton was picked in Oklahoma, most of it destined for textile mills in the East. A cotton train was begun between Guthrie and Fort Smith. It was found that, with careful loading, a flatcar could haul 50 bales, but even so the road worked full-time to clear the loading platforms along the way. It was also found that bales of cotton made a great target for spark shooting from the stack of the locomotive, so additional “firemen” were hired for the cotton train. Each man was issued several buckets of water and two cars. Better wet cotton than burned.

And there was the problem of “fire” in another form-liquid. On the afternoon of August 7, 1907, the local freight pulled into McCurtain, Oklahoma after a 38 mile run from Fort Smith, Arkansas. The crew dropped off the caboose and went into the depot to check their switching orders.

There, they were sidetracked by a Deputy U.S. marshal, who arrested the conductor and two brakemen, charging them with importing whiskey into Indian Territory, a Federal offense.

A search of the train revealed a cache of 125 pints and 64 quarts of booze hidden in the caboose. The three trainmen were taken to jail at Poteau, thereby stranding the train which, according to regulations, couldn’t operate with just the engineer and fireman. The front-end men wired the main office and cooled their heels, waiting for a new crew to be sent out from Fort Smith.

Serious mishaps were common in the early days of uncertain roadbeds. George Kongable a former FS&W engineer, remembers one round trip in 1906 which provided him seven derailments in just one journey. “No one was hurt, possibly due to the slow speed of the trains then-thirty-five miles per hour maximum.”

Precious Lemonds remembers riding the FS&W when she was a young girl, but in a kindlier fashion. “The Parlor car had green velvet seats,” she says, “and we thought that was so luxurious. It was an event when the train went through. It brought mail and visitors and everyone went down to the station to see them.”Lemonds lived in Quinton, where there was a zinc smelter served by the railroad.

But time was running out. When oil and gas brought new prosperity to the Southwest, the old Footsore and Weary was left at the station. Petroleum products began replacing coal and coke, the mainstays of the road. The coke ovens along the route were abandoned in 1921, hurting the railroad’s revenues severely.

The Fort Smith and Western was placed in receivership on October 9, 1915 and was operated until February 1, 1923 when it was reorganized under the name of the Ft Smith & Western “Railway Co.” instead of “Railroad Co.” For another eight years, the railroad fought the inevitable; then on June 1, 1931, the Central National Bank of Cleveland, Ohio, acting as trustee under the company’s first mortgage, brought suit to foreclose the mortgage and appoint a receiver.

By 1935, the FS&W was operating at an average annual deficit of $300,000. Its track was paralleled by the Rock Island at an average distance of 30 miles to the south and the numerous bus and truck lines operating over improved highways in the area bled off a large portion of the freight formerly moved by rail. Worse, the Great Depression spread its mantle of misery over the land.

Business on the road had fallen off to almost nothing and the final blow came from another railroad, the Missouri-Kansas-Texas Railroad, popularly known as the Katy, which refused to renew the FS&W trackage rights between Fallis and Oklahoma City. Operations were suspended early in 1939. The federal court at Fort Smith directed the road to be sold.

The FS&W was living down to its nickname. The entire road needed reballasting. No repairs had been made on depot buildings, stock pens, shop or water tanks in more than fifteen years. A boxcar was being used as a depot in Guthrie, and only temporary repairs had been made to the 190 wooden bridges on the line during the preceding decade. The steel span across the treacherous South Canadian River would require $200,000 alone.

George Kongabel recalls the last train over the tracks because he was the engineer. “It took about five months to take up the rails,” he said. His train was used to haul the iron and ties to Fort Smith where they were sold for scrap. Today, nothing but eroded embankments and crumbling culverts remain as tangible proof that the line ever existed.

Why the nickname “Foot Sore and Weary?” The railroad bed was terrible. A former switchman was quoted, “You couldn’t see the back of the coach ahead of you; the ride was so jarring and the smoke was thick.” In 1906 the speed of the train was 35 miles per hour. The same switchman said, “You could walk and keep up with the train!”