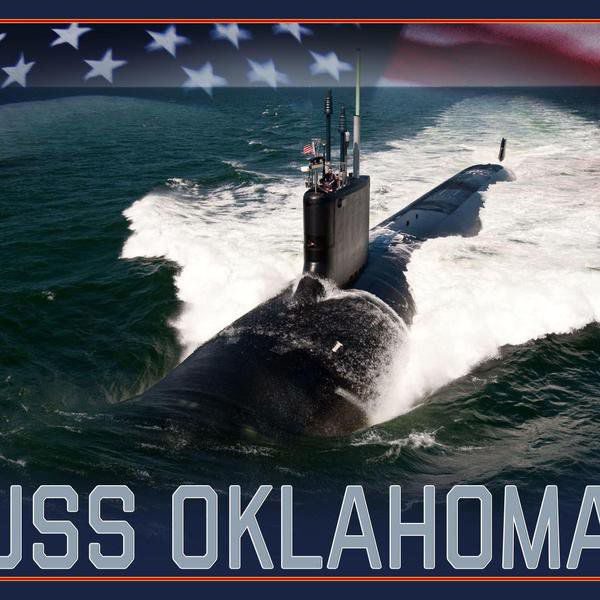 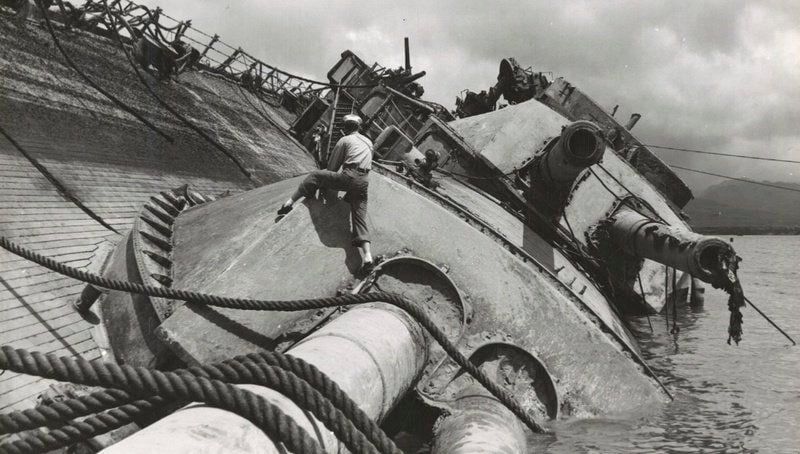 National Archives and Records AdministrationThe USS Oklahoma was sunk by several bombs and torpedoes during the Japanese attack on Pearl Harbor, Hawaii. A total of 429 crew died when the ship capsized. The Oklahoma was righted and salvaged in 1943 and the remains of many crew members were recovered. However, unlike most of the other battleships that were recovered following Pearl Harbor, Oklahoma was too damaged to return to duty. She was eventually stripped of her remaining armaments and superstructure before being sold for scrap in 1946.

National Archives and Records AdministrationThe USS Oklahoma was sunk by several bombs and torpedoes during the Japanese attack on Pearl Harbor, Hawaii. A total of 429 crew died when the ship capsized. The Oklahoma was righted and salvaged in 1943 and the remains of many crew members were recovered. However, unlike most of the other battleships that were recovered following Pearl Harbor, Oklahoma was too damaged to return to duty. She was eventually stripped of her remaining armaments and superstructure before being sold for scrap in 1946.

The USS Oklahoma's keel was laid down in 1914 and the vessel cost about $7 million to build. During the christening ceremony Bishop E. E. Hoss of Muskogee, Oklahoma, prayed that the ship would be a "minister of peace" and not an instrument of war. His words proved true, as the Oklahoma made a slight contribution to the American effort in World War I. But the vessel was virtually destroyed in the opening moments of World War II.

USS Oklahoma (Battleship # 37, later BB-37), was a 27,500-ton Nevada class battleship, built at Camden, New Jersey. She was commissioned in May 1916 and generally operated in the Atlantic over the next five years. In mid-1918, Oklahoma went to European waters to help protect convoys. Late in that year and in June 1919 she escorted President Wilson during his voyages to and from France. In 1921, the battleship moved to the Pacific, visiting the west coast of South America prior to joining the Pacific Fleet. During most of the rest of the decade, Oklahoma served with the Battle Fleet during its many exercises, drills and Fleet Problems. She participated in the Fleet's trans-Pacific cruise to Australia and New Zealand in mid-1925. In the summer of 1927, she transported Naval Academy Midshipmen from the east to the west coast during their annual training cruise.

Oklahoma was modernized at the Philadelphia Navy Yard in 1927-29, emerging with a greatly altered appearance and notably improved battle-worthiness. After brief service with the Scouting Fleet, she returned to the Pacific in mid-1930, and renewed her participation in the Battle Fleet's activities. In July 1936, Oklahoma was sent to Europe to help evacuate U.S. citizens and others during the Spanish Civil War. She rejoined the Battle Fleet in the Pacific later in the year.

In 1940, Oklahoma's base was shifted from the U.S. west coast to Pearl Harbor, Hawaii. She was at Pearl Harbor when the Japanese attacked on 7 December 1941. Moored outboard of USS Maryland (BB-46), she was hit by a great number of Japanese Type 91 aerial torpedoes. With her port side torn open over much of its length, Oklahoma rapidly rolled over and sank to the harbor bottom, with the loss of over 400 of her crew. Many of the men trapped in her upturned hull were cut free through the intense efforts of Sailors and civilian Navy Yard employees.

During 1943, Oklahoma was the subject of a massive salvage undertaking, involving turning her upright, patching her damages and refloating her. She was drydocked late in the year to be stripped of guns and other equipment and repaired sufficiently to make her relatively watertight. Too old and badly damaged to be worth returning to service, Oklahoma was formally decommissioned in September 1944. She was sold for scrapping in December 1946, but sank while under tow from Hawaii to California in May 1947.

In December of 2019 Acting Secretary of the Navy Thomas Modly announced his decision in naming its two newest Virginia Class fast-attack nuclear submarines in honor of a pair of ships that were sunk when the Japanese attacked Pearl Harbor- the USS Oklahoma (SSN-802) and the USS Arizona (SSN-803).

"It is my fondest wish that the citizens of the great states of Arizona and Oklahoma will understand and celebrate our Navy’s desire to memorialize the 1,177 heroes who perished in USS Arizona (BB-39) and the 429 more in USS Oklahoma (BB-37),” Modly said in a statement.

According to Modly’s statement, Virginia-class fast-attack submarines provide the Navy with the capabilities required to maintain the nation’s undersea supremacy well into the 21st century. They have enhanced stealth, sophisticated surveillance capabilities and special warfare enhancements that will enable them to meet the Navy’s multi-mission requirements.

“The future USS Oklahoma will serve our country, protecting our shores and allies while also honoring the contributions of all Oklahomans to our nations,” Sen. Jim Inhofe (R-Okla.), chairman of the Senate Armed Services Committee, said in a statement.

The Navy awarded General Dynamics Electric Boat and subcontractor Huntington Ingalls Industries’ Newport News Shipbuilding a $22.2-billion multi-year procurement contract for fiscal years 2019 through 2023 to build nine Block V submarines, including the new Arizona and Oklahoma, earlier this month. In a previous release announcing the Block V contract, the navy stated the first boat, now known as USS Oklahoma, would be delivered in 2025. The boats will be built jointly by General Dynamics Electric Boat in Groton, Connecticut, and at Huntington-Ingalls Newport News Shipbuilding in Newport News, Virginia.

During recent years a piece of the fire control tower (mast) of the USS Oklahoma was located during a dredging operation. In 2010 the U.S. Navy agreed to loan this piece of the mast to the Muskogee War Memorial Park. (USS Batfish).

On December 7, 1941 four hundred and twenty-nine men perished when the USS Oklahoma went down at Pearl Harbor Some died instantly while others languished for days trapped under the overturned hull waiting for a rescue that would come too late. To this day, many are still buried on the island of Oahu as "Unknowns." Their bodies were never returned to their families to be buried in the family plot. They did not have a grave marker detailing their name, service and sacrifice. Their families never had closure. On this Memorial Day Weekend let’s remember them and all who have lost their lives protecting our freedom.