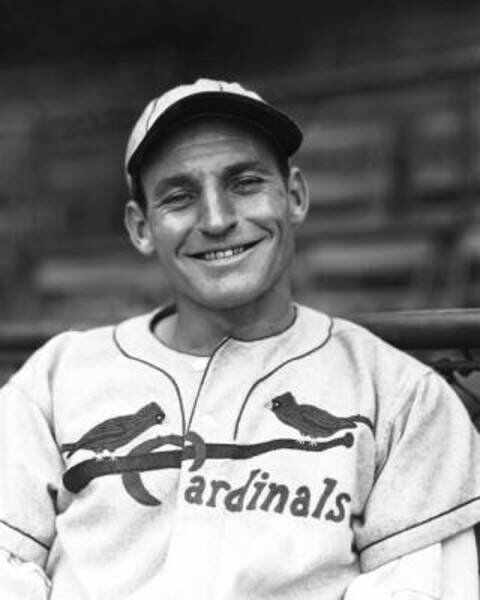 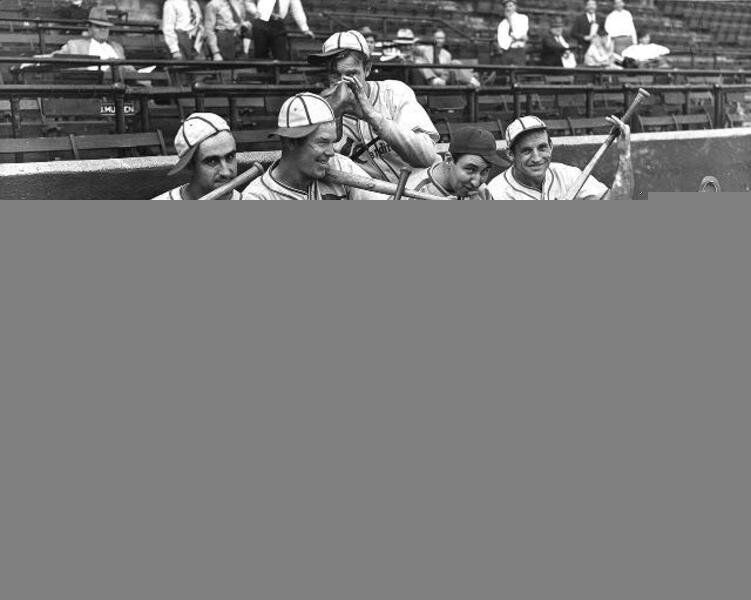 Finding myself in St. Louis on deadline day, and with the Cardinals playing at home, it seemed the best time to remember the “Wild Horse of the Osage,”- Johnny Leonard Roosevelt "Pepper" Martin. Though born in Temple, OK and growing up in Oklahoma City it was eventually his Blocker Ranch in southeastern Oklahoma that Martin and his family called home. Upon his death in McAlester in 1965 he was originally interred in the Memorial Park Cemetery in Oklahoma City, but was re-interred in January 2009 to lie next to his wife in a very unassuming grave at the Quinton Cemetery.

Johnny Martin began his professional baseball career at the age of 19 when he signed to play as a shortstop in the Oklahoma State League for a team in Guthrie, Oklahoma. When the league folded in 1924, his contract was sold to the Greenville Hunters of the East Texas League. In 1925, he posted a .340 batting average in 98 games for the Hunters and his contract was acquired by the St. Louis Cardinals to play for their Western Association affiliate, the Fort Smith Twins. He continued to post batting averages above the .300 mark. In 1927, Martin hit for a .306 average in 147 games with the Houston Buffaloes, earning him a promotion to the major leagues.

It was in Fort Smith that John Martin became “Pepper” Martin, although the exact origin is not clear. He is quoted as saying that team owner Blake Harper began calling him Pepper after watching him run the bases and “listening to my line of chatter.” In another version, Martin arrived in Fort Smith and saw the headline “Pepper Martin to Join Twins.” Angry at the headline, Martin stormed down to the newspaper office to complain, only to see Harper there and be told that Harper had picked out the name. Harper may have borrowed the nickname from Vincent “Pepper” Martin, a prominent featherweight and junior lightweight boxer of the time. Whatever the origin, the moniker stuck.

A 1940 Time Magazine article shared, “One spring day in 1931 a dust-covered, bowlegged young man, with a hawk nose, buffalo shoulders and long, hairy arms, marched into the St. Louis Cardinals' training camp in Bradenton, Fla. and announced to Manager Frank Frisch: "I'm Martin." Manager Frisch stared. Then he asked Rookie Martin why he was late. Martin explained that he had been detained in jail for riding a freight. "But we sent you railroad tickets." Retorted Martin: "What do you take me for, a dope? I cashed them in and rode for nothing." Such was the introduction of John Leonard ("Pepper") Martin to the big leagues.”

An outfielder and third baseman Martin led the National League in stolen bases three times and scored more than 120 runs in a season three times. As a third baseman, Martin “introduced a style of play all his own,” the St. Louis Post-Dispatch reported. Martin described his approach to fielding groundballs as “stop it with your chest, then throw them out.” In the 1931 World Series against the Athletics, Martin had an on-base percentage of .538, producing 12 hits and two walks in 26 plate appearances, and swiped five bases. He batted .355 and scored eight runs in the 1934 World Series versus the Tigers. “Pepper always was fighting to win, trying for that extra base or an impossible chance, no matter whether his team was miles ahead or furlongs behind,” The Sporting News noted in an editorial.

After 1940 he retired to coach, but with many prime ballplayers in military service in 1944 returned to the Cardinals, playing in 40 game and hitting a respectable .279 (the Cards won the NL Pennant, but he didn't play in the Series).

After the end of his major league career, Martin returned to the minor leagues, serving as a player-manager with the San Diego Padres of the Pacific Coast League in 1945 and 1946 before becoming the player-manager for the Greenville Spinners of the South Atlantic League in 1947. He managed the Miami Sun Sox of the Florida International League in 1949-1951 and was hired to manage the Miami Beach Flamingos in 1952. In 1953, he became the manager of the Fort Lauderdale Lions and led them to the Florida International League title. After spending the 1954 season as the manager for the Portsmouth Merrimacs, Martin was named as a coach for the Chicago Cubs in September 1955. Stan Hack was fired as the Cubs Manager when they finished in last place in the 1956 season, and the new Cubs manager, Bob Scheffing, asked for Martin's resignation along with the rest of the coaching staff. Martin returned to the minor leagues once again where he became a player-coach for the Tulsa Oilers, playing his final game at the age of 54. He took his final field assignment as the manager of the Miami Marlins in 1959.

Before his death in 1965 at age 61, Martin served briefly as the athletic director of the Oklahoma State Penitentiary at McAlester. His wife, Ruby, survived him by over four decades, dying just after her 99th birthday in 2009. Two of Martin’s daughters still live in the local area. Martin was inducted into the Oklahoma Sports Hall of Fame in 1992 and was enshrined into the St. Louis Cardinals Hall of Fame in 2017.

“Pepper” became known as “The Wild Horse of the Osage” because of his daring aggressive baserunning abilities and his Oklahoma roots. And the St. Louis Cardinals of the 1930’s became known as the Gashouse Gang for their very shabby appearance, roguish behavior and practical jokes. The phrase gas house referred to factories that turned coal into town gas for lighting and cooking. Common in U.S. cities until the widespread use of natural gas, the plants were noted for their foul smell and were typically located near railroad yards in the poorest neighborhood in the city.

Agnes "Pat" Crimmins, 86, of McAlester, died Sunday, Oct. 25 in McAlester. The family will welcome friends for visitation at Brumley-Mills Funeral Home on Friday from 5:00 to 7:00 p.m. Graveside funeral services will be Saturday at 2:00 p.m. at Memory Gardens Memorial Park.

Wilford Joe "Will" Tate, 79, of Tulsa, died Thursday, Oct. 22 at Hillcrest Hospital in Tulsa. The family, and any friends that wish to attend, will gather at Brumley-Mills Funeral Home for an informal celebration of life on Thursday, Oct. 29, at 4:00 p.m. Will Tate was born on May 18, 1941 i…

Brandon Broome, 25, of McAlester, died Thursday, Oct. 22 near Bache. Visitation is Thursday from 5:00 to 7:00 p.m. and funeral services are Friday at 2:00 p.m., both at Brumley-Mills Funeral Home of McAlester.