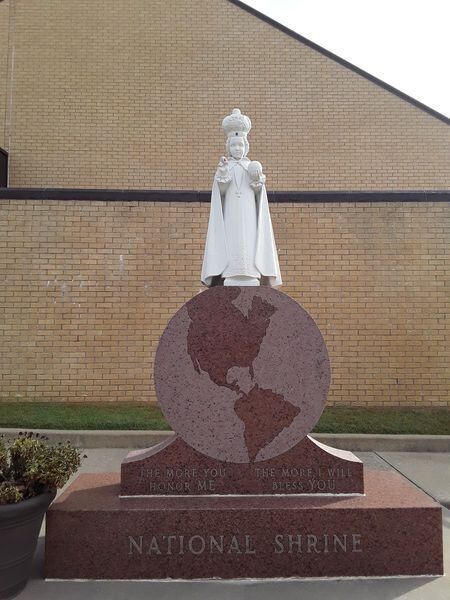 The National Shrine of The Infant Jesus of Prague, monument. (Cathey photo) 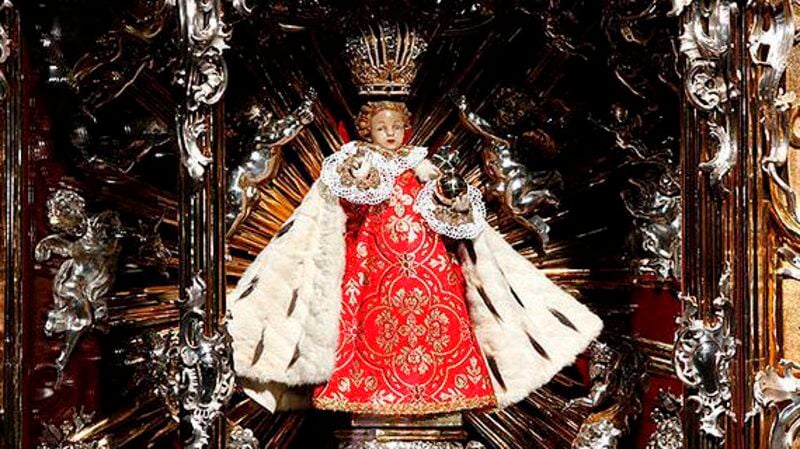 The National Shrine of The Infant Jesus of Prague, monument. (Cathey photo)

The Infant of Prague statue is one of the most popular Christian statues in the world and yet relatively few people know the origins of it. The statue’s history is fascinating, associated with various legends and miracles. And just up the road in Prague, Oklahoma is The National Shrine of the Infant of Prague.

Most historians believe that the original statue was carved in Spain around the year 1340 in a Cistercian monastery. Some traditions claim that a monk had a vision of the child Jesus and fashioned the statue after what he saw. The statue remained in Spain for several centuries and a tradition claims that St. Teresa of Avila possessed the statue in the 16th century.

Whatever the case may be, the statue found its way to Prague during the reign of the House of Habsburg in 1556. At this point it was given by Dona Isabella Manrique as a wedding gift to her daughter Marie Manrique, who married Vratislav of Pernstyn. Some traditions claim that Dona received the statue from St. Teresa of Avila.

The statue was passed down through the family and by 1628 was given to a local Carmelite monastery by Princess Polyxena von Lobkowicz. She reportedly said to the monastery, “I am giving you what I most esteem of my possessions. Keep the sculpture in reverence and you will be well off.”

In 1631, Swedish troops invaded Prague, and ravaged the Catholic churches. The Carmelites were forced to flee the Church of the Virgin Mary the Victorious. The Swedish troops desecrated the church, damaged the high altar, and cast the statue into a pile of rubble, breaking its arms and fingers.

In 1638, the Carmelites were able to return to Prague and to their Church of the Virgin Mary the Victorious. Although they were impoverished, they remembered the words of Princess Polyxena. Father Cyril found the statue of the Holy Child buried in the ruins of the church. He cleaned the statue and placed it in their oratory for veneration.

One day, while he was praying before the statue, he heard the Holy Child Jesus say, “Have pity on Me, and I will have pity on you. Give Me hands, and I will give you peace. The more you honor Me, the more I will bless you.” Father Cyril knew that he had to find a way to repair the Infant’s hands, but he and his religious brothers had neither the skills nor the financial means to do so. Therefore, Father Cyril implored the help of the Blessed Mother to come to the aid of her divine Son. Once again, when Father Cyril was praying before the image, the Holy Child spoke to him: “Place Me near the entrance of the sacristy and you will receive aid.” Father Cyril immediately complied. In just a few days, a man came to the sacristy after Mass to offer help. His donations paid for the repair of the statue.

Fast forward to 1891 when Czech immigrants, following the opening of the Sac and Fox Indian Reservation by land run, settled in what is now Lincoln County, Oklahoma and named their new town, “Prague” for the present-day capital of the Czech Republic, with an altered pronunciation.

The Catholic People of Prague, Oklahoma, were first served by various missionaries in a small wooden Church built in 1899. This church was located where the Catholic Cemetery is now, about a mile from the present property. As the town and the Catholic population grew, there was a need for a larger church. In June, 1909, Bishop Theophile Meerschaert dedicated a new church under the patronage of St. Wenceslaus, the patron of the Czech nation. This church was built on the present parish grounds.

This 1909 church was destroyed by a tornado in 1919. That same year, a new brick church was built and was dedicated by Bishop Meerschaert under the continued patronage of St. Wenceslaus. This church served the Catholics of Prague until after World War II, when it became necessary to make plans for a larger church.

As Father Johnson gazed on the statue, he promised The Infant Jesus that he would make the new Church a Shrine to The Infant Jesus of Prague if The Infant would help him get the new church built. Donations of money and supplies soon started arriving from parishioners and businesses in Prague. Donations were even received from throughout the United States.

On Feb. 22, 1949, Bishop Eugene J. McGuinness dedicated the new Catholic Church at Prague, again under the patronage of St. Wenceslaus. Keeping his promise, Father Johnson set the state of The Infant Jesus of Prague “on a throne of gold” back of the main altar.

A novena prayer, offered especially Dec. 17-25, is as follows:

Dearest Jesus, little Infant of Prague, how tenderly You love us. Your greatest joy is to dwell among us and to bestow Your blessing upon us. Though I am not worthy that You should help me, I feel drawn to You by love because You are kind and merciful.

So many who turned to You with confidence have received and had their petitions granted. Behold me as I come before You, lay open my heart to You with its prayers and hopes. I present to You especially this request, which I enclosed in Your loving Heart).

Rule over me, dear Infant Jesus, and do with me and mine according to Your holy will, for I know that in Your divine wisdom and love You will arrange everything for the best. Do not withdraw Your hand from me, but protect and bless me forever.

I pray You, all-powerful and gracious Infant Jesus, for the sake of Your sacred infancy, in the name of Your Blessed Mother Mary, who cared for You with such tenderness, and by the greatest reverence with which St. Joseph carried You in his arms, help me in my needs. Make me truly happy with You, dearest Infant, in time and in eternity, and I shall thank You forever with all my heart. Amen.