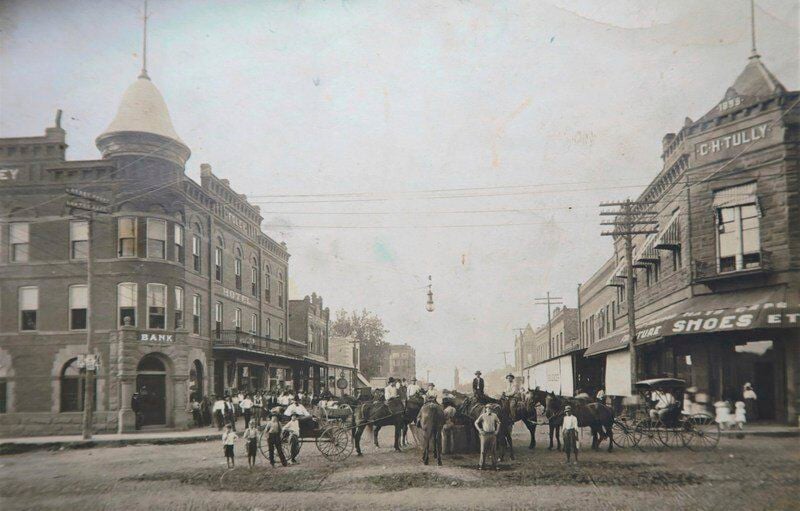 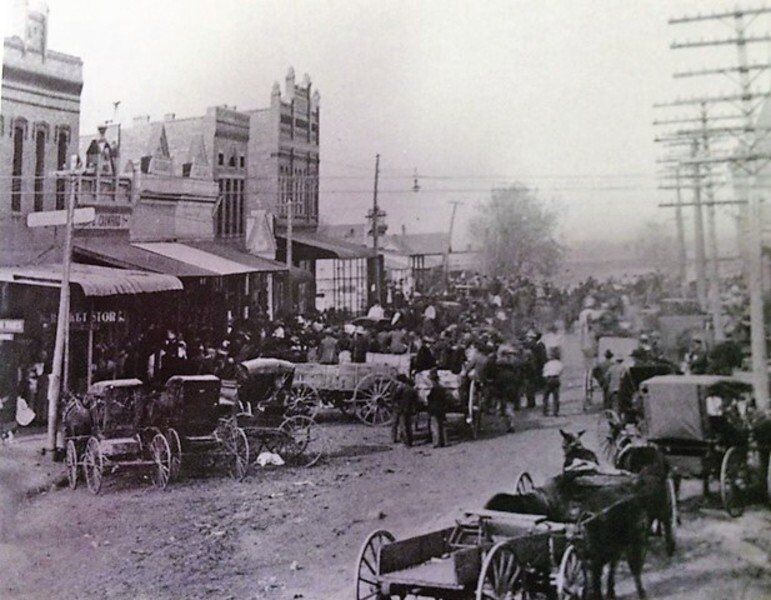 On Friday evening, the Eufaula Ironheads and the Checotah Wildcats met for the 106th time in Oklahoma’s longest uninterrupted high school football rivalry. But before this game began in 1915, the real McIntosh County rivalry began at Oklahoma Statehood.

During the settling of the Western United States, conflicts frequently arose between neighboring towns when they were competing for the county seat. Most of Oklahoma's "county seat wars", as they were called, were concluded without bloodshed, and involved little more than heated words and close elections. The situation in McIntosh County, however, ended up being much more serious.

On the afternoon of Jan. 9, 1907, the territorial government in Guthrie, sent a telegram to Checotah stating that the legislative committee had selected the town as the temporary seat of McIntosh County, until an election could be held to decide new a permanent location. The people of Checotah were very happy with the surprising news, since being selected as the temporary county seat meant having a better chance of becoming the permanent one in the upcoming election. The whole town celebrated; citizens danced in the streets, church bells rang, and shopkeepers passed out cigars.

Their good fortune soon turned into disappointment, however, when a Eufaula attorney and delegate to the constitutional convention William C. Liedtke heard of the news. Liedtke delivered a "rousing" speech in support of Eufaula to the general assembly on January 17, and called for a vote to decide the matter. The subsequent tally recorded that Eufaula had received forty-two votes, and Checotah forty-one. As a result, and in spite of the telegram and the celebration in Checotah a few days before, Eufaula was designated as the new temporary county seat. A two-story building on the northeast corner of Main Street and Riley Avenue was then rented for use as a courthouse, and the county records were moved there.

Unsurprisingly, the people of Checotah were not very happy with the decision and protested, but they soon quieted down and began focusing on the upcoming special election. The people of Eufaula did the same, as did the people of Stidham, which is located about eight miles northwest of Eufaula. "Boosters" from all three actively campaigned for their towns over the following months.

The special election was held on May 23, 1908. The preliminary count reported that Checotah had received 1,647 votes, Eufaula about 1200, and Stidham 384. Since Checotah received 63 votes more than the combined totals of the other two towns, it was assumed to be the winner. When the election was over, the ballot boxes were delivered to Guthrie for confirmation. Soon after, the people of Eufaula complained that heavy rains prevented over 300 of their supporters from reaching the polls. The rain was so bad that the noted poet and Creek leader Alexander Posey drowned in the nearby Canadian River. As the results were being confirmed in Guthrie, a problem arose with some sixty-five ballots that were referred to as "unaccounted for." Ultimately, the problem cast doubts on the legitimacy of the entire election and created a controversy about the propriety of the earlier count, which reported that Checotah was the winner.

At the beginning of June 1908, the attorneys representing Eufaula's campaign obtained a hearing with Chief Justice Robert L. Williams of the Oklahoma Supreme Court and convinced him to issue a temporary injunction, preventing anybody from removing the county offices in Eufaula, until "certain alleged discrepancies" were resolved. One Guthrie newspaper described the situation: "Checotah has a tail-hold and a down-hill pull but Eufaula has a bull-dog grip in the flank, and will hold on until the [county] offices are moved."

On Sunday morning, June 7, 1908, a "squad" of about 25 heavily armed men under the command of Frank Jones boarded a special train in Checotah and rode the fifteen miles south to Eufaula. After arriving in town at about noon, the men split up into two groups. From the depot the smaller group marched north and found Edward C. Julian, who had the keys to the County offices. The other larger group, which was personally led by Jones and consisted of about fifteen men, headed straight for the town's main intersection of Foley Avenue and Main Street, which offered a commanding view of the courthouse.

While marching there, two Eufaula deputy city marshals named Kelser and F. M. Woods briefly confronted Jones, who told them “To get off the streets, else they would get the contents of his gun." Kelser and Woods backed off, but then went around to warn the other Eufaula men in town, most of whom were on their way home from church. Within a short amount of time, several Eufaula men had armed themselves to face off with Jones and his raiders. The owner of a local hardware store passed out guns to those who did not have weapons of their own.

The first casualty in the ensuing battle was Marshal Woods, who was mortally wounded by Special Deputy Sheriff Joe Parmenter. Parmenter struck Woods three times, but was then fired on and hit twice as he was trying to take cover behind a water trough. Around the same time word was sent to the home of the Grant Johnson, an African-American policeman in Eufaula and former deputy US Marshal, asking for his help. When Johnson arrived in Eufaula from his home two miles outside of town, he was greeted by the defenders, who were happy to have a former deputy US Marshal on their side.

Johnson and Jones had once worked together as officers of the law, so when Johnson saw the other, he asked for him to surrender. Jones, who had mutual respect for his former fellow officer and could see that his men were already outnumbered by the growing Eufaula force, agreed to negotiate. The disappointed raiders were then taken prisoner and loaded onto a train to be sent home, some eight hours after having arrived in Eufaula.

The Checotah people returned home empty handed, but the next day, a man named “General” Dunlap (the General was a nickname), who lived North of Eufaula, came into town and said he was going to kill Ed Julian because of some controversy over the fight the day before. Julian was a county official who lived in Checotah, but stayed at the Foley Hotel in Eufaula. The Foley Hotel was located above the First National Bank building on the Northwest corner of Foley and Main Streets. Dunlap was carrying some coal oil and bacon when he arrived in front of the bank. He placed the articles on a ledge outside the bank and went up the stairs to Julian’s room. He knocked on the door and ordered Julian to come out. After threats were exchanged through the locked door Julian became frightened and fired a volley of bullets through the door, killing Dunlap on the spot. Julian was arrested and a hearing was held but he was released due to the fact that he had killed Dunlap in self-defense.

Shortly after the train of Checotah men pulled out of town, a former deputy US marshal named "General" Dunlap decided to seek out and arrest the county clerk, Edward C. Julian, who was suspected of collaborating with Jones and his raiders. Dunlap, who was reported to have been drinking before attempting to make the arrest, then headed for the hotel in the Foley Building, which is located at the same intersection the Checotah raiders had occupied. Dunlap soon found Julian's room on the third floor, but the latter was ready for any trouble.

Julian heard suspicious noises outside his door before Dunlap knocked on it. Julian answered the door, and although it is not known what words were exchanged between the two men, within seconds they were shooting at one another. The shootout, which was fought at point-blank range, was over in just a few seconds. Dunlap was mortally wounded, having been hit in the forehead by one of Julian's bullets. Julian managed to get away unharmed.

In all, two men were killed and the wounded Joe Parmenter recovered. Frank Jones was also criticized for having failed to complete his mission.

About two weeks after the clash, Gov. Charles N. Haskell announced his findings of the McIntosh County special election. Haskell reported that 3,284 votes had been cast at the polls on May 23, 1908, and that more of the voters preferred Checotah over Eufaula and Stidham combined. It made no difference, though. An appeal was pending before the Oklahoma Supreme Court and an injunction to forestall the removal of the county offices from Eufaula had been issued. Ultimately, it was decided that a new special election would have to be held in order to resolve the controversy once and for all.

In January 1909, shortly after the state legislature convened, a freshman Senator named Richard A. Billups from Cordell related a story of the county seat election held on January 17, 1907. Billups said that when the Senate called for a vote, he illegally cast a vote in his friend’s name in favor of Eufaula. Upon hearing of the story, Senator Harry Beeler of Checotah, who had supplied Jones with the special train on June 7, 1908, realized that Billups' illegal ballot was the one that had given Eufaula the one-point margin in the January 1907 election, and that Billups was therefore responsible for the resulting controversy and bloodshed. However, when Billups realized what he had done, he quickly recanted his entire story, and said he was merely joking about the whole thing.

Billups' story was still being discussed when the final special election took place on February 10, 1909. Only Eufaula and Checotah were in the race. Eufaula received 1,919 votes and Checotah 1,844, but this time the results were not contested, and Eufaula has been the seat of McIntosh County ever since.

The noted Creek poet and editor of the Eufaula Indian Journal, who had drowned during those heavy rains of June 1908 when the votes were happening concerning the county seat, had shared in 1905 when the Sequoyah State Convention proposed that both towns (Eufaula and Checotah) would be placed in the same county, “the county is not big enough for both of them.”

In July 1925, the old courthouse in Eufaula burned down and was rebuilt into a one-story building. Many of the county records that the two factions had fought for were lost to the flames. The current McIntosh County Courthouse was built two years later in 1927.