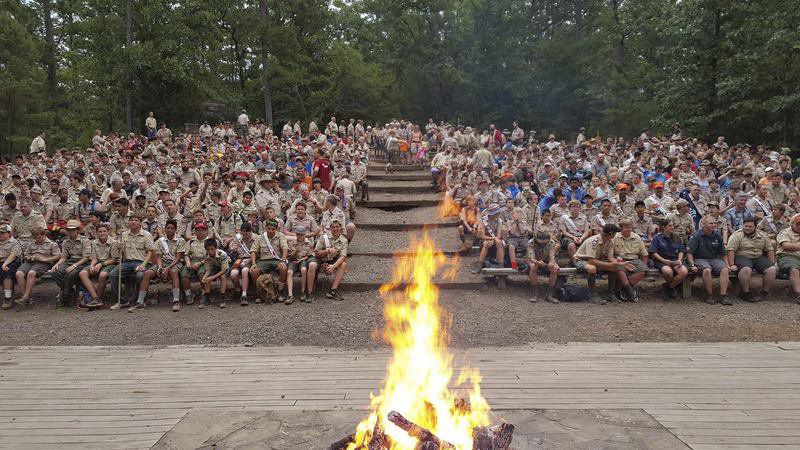 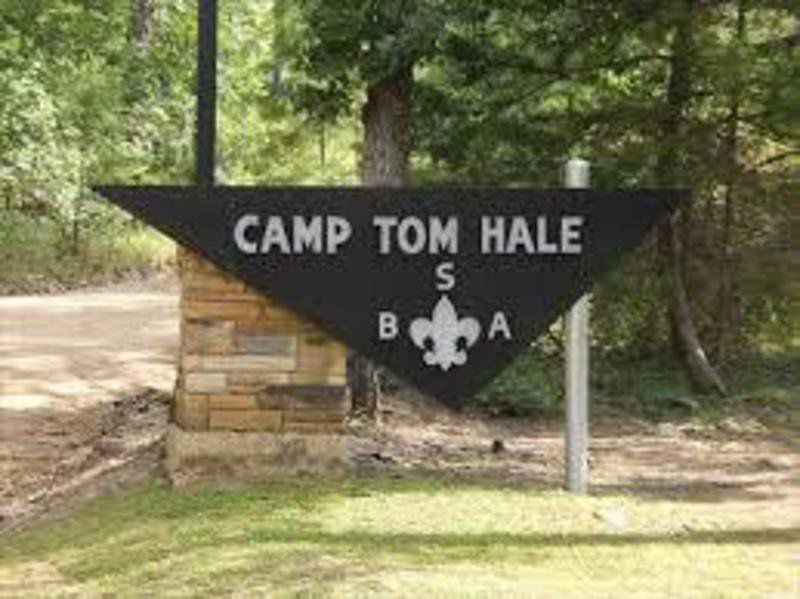 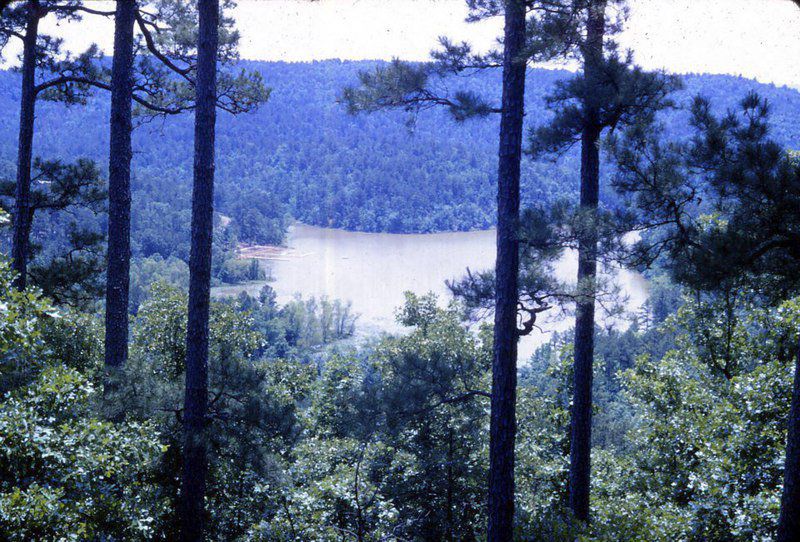 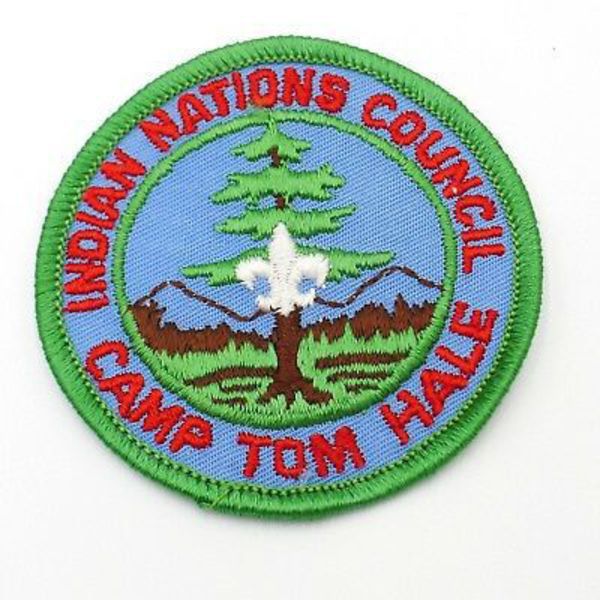 EDITOR’S NOTE: This continues a four-part series on the 90th anniversary of Camp Tom Hale and the Hale Scout Reservation.

“The State of Oklahoma owned all of the land around camp and it had been developed into Robbers Cave State Park with the park road bisecting the camp. Then conflict developed. Tourists wanted to visit the famous Robbers Cave and to invade the camp to do so. An agreement was reached with park authorities where by a parking area was located on camp property with a foot trail around the edge of the property line, leading to the Cave. State officials constantly pressed for a road through the camp. This was always denied. Meantime tourists would lose their way and be constantly wandering through the camp. (Note: 'Lost' girls in shorts create quite a distraction for summer camp staff members.)”

In 1956, the state decided to relocate OK Highway #2. They purchased 30 acres of camp property leaving the council with only 180 acres that was now trisected by two roads. The council began to look around for a new camp. In 1960, the state legislature passed a bill authorizing the swap of the Camp Tom Hale property at Robbers for a 480-acre tract of land owned by the state on the west edge of the Quachita National Forest in southern LeFlore County. To-date it remains somewhat of mystery why or how this piece of land was in possession of the State of Oklahoma — but it is known that during the Workers Progress Administration of the 1930s, a dam was built across Bohannon Creek, resulting in the beautiful 25 acre Lake Bohannon nestled among with Winding Stair Mountains and visible from atop the later constructed Talimena National Byway. The legislature also authorized $75,000 to be paid to the Choctaw Area Council as reimbursement for the improvement in the old camp.

Scout Executive and Camp Director Warren Green became the one man in command of a most willing group of Scouts and Scouters who began planning for the building of a new scout camp in a most primitive setting. Plans were developed according to the requirements of the National Council Boy Scouts of America. Construction on the new Camp Tom Hale began in late 1960 and the first summer camping season there was held in June of 1961.

With Green serving as the chief architect of the new Camp Tom Hale, it was by no means a one-man endeavor. Early on he selected as his general contractor in the position as camp ranger a local man, Sid Ramsey — who went on to spend 40 years on the camp property and the individual with more fingerprints on the camp than anyone else in its now 60 years at the Talihina area location. Camp directors camp and went but Sid Ramsey was the mainstay.

During the early years of new Camp Tom Hale establishment and development, there was also a Scouting volunteer who made an indelible mark — Dr. E.H. Shuller. Dr. Shuller, an enduring friend of Scouting, was personally involved as a worker and supervisor in most of the major projects in the building of the new camp. When Camp Tom Hale was in need of improvement or a new project, he was there — although he also had a full-time job as co-founder of the McAlester Clinic in 1935 and as an obstetrician/gynecologist, delivered near every baby in Pittsburg County for many decades. Into his late 70s, E.H. Shuller could be found at Camp Tom Hale walking the 480-acre camp, checking on and repairing the perimeter fence. Dr. Shuller was the leader of the first work crews to build the walkways to both the Edward Paul Shuller Amphitheater, named in tribute to his son who died in 1961 during military service and the walkway affectionately known as Cardiac Hill.

After 10 years at the new site change was again on the horizon. The camp’s owner since 1930, the Choctaw Area Council like many Scout Council’s around the country during this time began merger talks with the Indian Nations Council headquartered in Tulsa. The Council mergers became reality and in 1972 Camp Tom Hale became owned, as is now, by the Indian Nations Council.

In the 1990s, Camp Tom Hale experienced significant expansion projects — including the construction of a new dining lodge, incidentally the benefactor being Elmer “Bud” Hale Jr., the grandson of the camp’s namesake Tom Hale. Several additional structures were completed, including two new swimming pools and by the end of the decade an approximate 100 new acres were acquired from the Federal government. It was during this time that Camp Tom Hale became Hale Scout Reservation. The 2019 camp season included near 4,000 campers from all over the multi-state region.

The 2020 camp season will be the 90th consecutive summer of Scout camp for Camp Tom Hale/Hale Scout Reservation. A 90th Anniversary Celebration was originally scheduled for the weekend of March 27-28 — but due to the coronavirus pandemic, it has been postponed. The 90th Anniversary Celebration is now scheduled for Saturday, June 13, at both Robbers Cave State Park and Hale Scout Reservation. For details or more information follow the Facebook page: Camp Tom Hale BSA Alumni or call 773-844-1804.

A 1984 Latimer County Today feature on Camp Tom Hale closed with the following:” It is a place to meet new people and say farewell to those who grow into adulthood. But mostly it is the place where youngsters turn into adults with a strong foundation for living that Scouting helps to provide.”

Alva M. Fite, 84, of Harts-horne, passed away on Mon-day, March 30, 2020, at his home. Memorial services will be scheduled at a later date. Arrangements are under the direction of Brumley-Mills Funeral Home of Hartshorne.

Charlie Hazel Dawn Short, infant daughter of Ethan Cole Short and Sierra Jane Labor, went to heaven on Friday, March 27, 2020. In addition to her parents, she is survived by grandparents, Linda Short, James and Shelly Labor, and Laura Beth and Jerry Robinson, and several aunts and uncles. Sh…