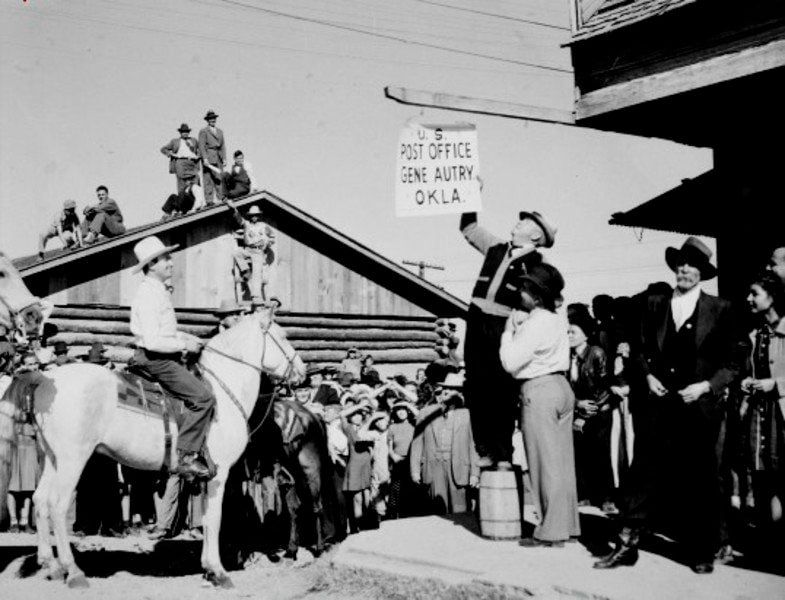 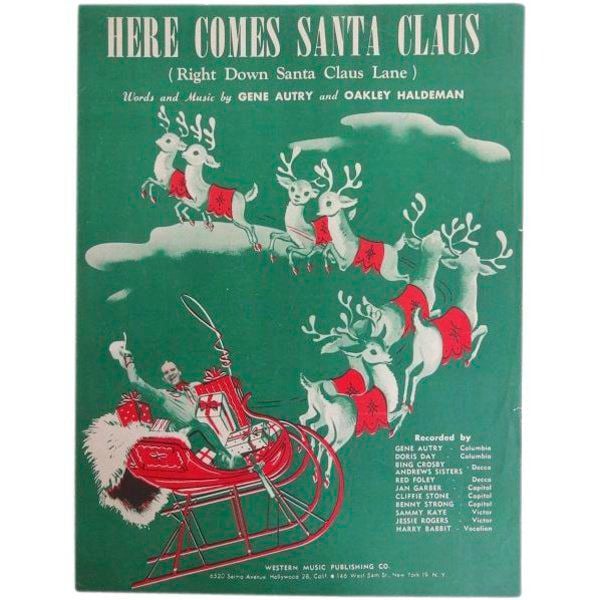 This week in 1948, “Here Comes Santa Claus,” wrote and recorded by Gene Autry in 1947, entered the Top 40 chart. Autry’s original recording (in which he pronounces Santa Claus as “Santy Claus”) was a top-10 hit on the pop and country charts. The story goes that he was riding his horse Champion in the 1946 Santa Claus Lane Parade (now the Hollywood Christmas parade) where he heard some children repeating, “Here comes Santa Claus. Here comes Santa Claus” over and over.

Autry was inspired by the joyful anticipation behind the words to jot down the first draft of a song. He brought his notes to Oakley Haldeman, then head of his music publishing company, and they completed the song together — little suspecting that it would become a Christmas classic. “Here Comes Santa Claus” was Gene Autry's first holiday recording and an immediate hit. Over the past 75 years the song's popularity has continued to grow, and in 1998 It was voted one of the top holiday songs of the 20th century by The American Society of Composers, Authors and Publishers (ASCAP).

Gene Autry was born in Tioga, Texas but while an infant his family had moved to Oklahoma where he was raised in the southern Oklahoma towns of Achille and Ravia, was already well on his way to becoming America’s Favorite Singing Cowboy when he bought the 1,200 acre Flying A Ranch on the west edge of Berwyn, Oklahoma. The residents of Berwyn peacefully coexisted with the name of their town for over half a century until Gene Autry and his Flying A Ranch Rodeo arrived. In 1939, Gene purchased 1,200 acres on the west edge of town and began extensive construction, intending to make the ranch the headquarters for his rodeo. In 1941, Berwyn resident and Deputy Sheriff of Carter County Cecil Crosby suggested that the town’s name be changed to Gene Autry to honor its distinguished neighbor. In order to accomplish this, several townspeople drew up a petition that was signed by all 227 residents. The sponsors then had to convince the Post Office Department, the Santa Fe Railroad, and the county commissioners of the change, and they all eventually agreed.

The official change from Berwyn, Oklahoma, to Gene Autry, Oklahoma, took place November 16, 1941, also Oklahoma’s 34th birthday. The massive event was attended by 35,000 people and many luminaries, such as Oklahoma Governor Leon C. Phillips, Assistant General Manager of the Santa Fe Railroad J.P. Cowley, and Gene Autry Mayor Charlie Gillespie. The daylong festivities began at 7 a.m. and culminated with Gene’s live broadcast of his CBS Melody Ranch radio show from a flat car on the railroad tracks. During the show, he sang several songs, received a scroll from high school student Juanita Huston bearing the name of every Gene Autry citizen, and marked the change of the railroad sign. Three weeks later, the United States entered World War II, and Gene enlisted in the Army Air Corps. After the war, he sold the Flying A Ranch.

Gene Autry', discovered by humorist Will Rogers, in 1929 while Autry was billed as "Oklahoma's Yodeling Cowboy" on KVOO in Tulsa, had a career spanning some 70 years in the entertainment industry. He became famous in radio, records, film, television, and live tour performances including rodeo. From the late 1920s through the early 1950s, Gene Autry recorded and wrote hundreds of songs; he was the most successful singing cowboy. Gene Autry was ranked among the most celebrated film stars, and for years was considered to be the most popular Western film actor. In his later years, Gene Autry owned a television and radio station on the West Coast and was the original owner of the Angels Major League Baseball team. Gene Autry is the only entertainer to have five stars on Hollywood's Walk of Fame, one each for radio, records, film, television and live theatrical performance (including rodeo).

Autry first appeared on screen in 1934 and up to 1953 popularized the musical Western and starred in 93 feature films. Autry made 640 recordings, including more than 300 songs written or co-written by him. His records sold more than 100 million copies and he has more than a dozen gold and platinum records, including the first record ever certified gold. Among the many hundreds of honors and awards Autry has received were induction into the Country Music Hall of Fame; the American Academy of Achievement Award, the Los Angeles Area Governor's Emmy from The Academy of Television Arts & Sciences; and the Board of Directors Lifetime Achievement Award from the International Achievement in Arts Foundation. Gene Autry was also inducted into the Nashville Songwriters Hall of Fame, The National Cowboy Hall of Fame, the National Association of Broadcasters Hall of Fame, and he received The Songwriters Guild Life Achievement Award. He was also honored by his songwriting peers with a lifetime achievement award from ASCAP. Gene Autry died at his home in Studio City, California on October 2, 1998. He was 91 years old

A year following Autry’s success with “Here Comes Santa Claus,” Robert L. May, a copywriter for the Chicago-based Montgomery Ward department stores came calling. In 1939 as a promotional gift for the store’s customers May had written the story of “Rudolph The Red-Nosed Reindeer The stores had bought and distributed coloring books every Christmas and saw writing their own story as a way to save money. Montgomery Ward distributed 2.4 million copies of the Rudolph booklet in 1939. A total of six million copies had been given out by the end of 1946, even though wartime paper shortages restricted printing. Rudolph's story was made into a song when May's brother-in-law, songwriter Johnny Marks, developed the lyrics and melody for it. Marks' musical version was first recorded by Gene Autry in 1949, selling two million copies that year. Autry didn't want anything to do with this song. It was his wife, Ina, who talked him into recording it, and it went on to become the second biggest-selling Christmas song of all time, next to Bing Crosby's "White Christmas." Crosby also recorded "Rudolph" and landed at #14 on the pop chart in 1950.

In 1990, the town of Gene Autry, Oklahoma, decided to turn its empty school building into the Gene Autry Oklahoma Museum, dedicated to the singing cowboys of “B” Westerns. The town of Gene Autry is l just off OK 177 north of Ardmore in Carter County, near the roads of Tumbleweed and Happy Trail.