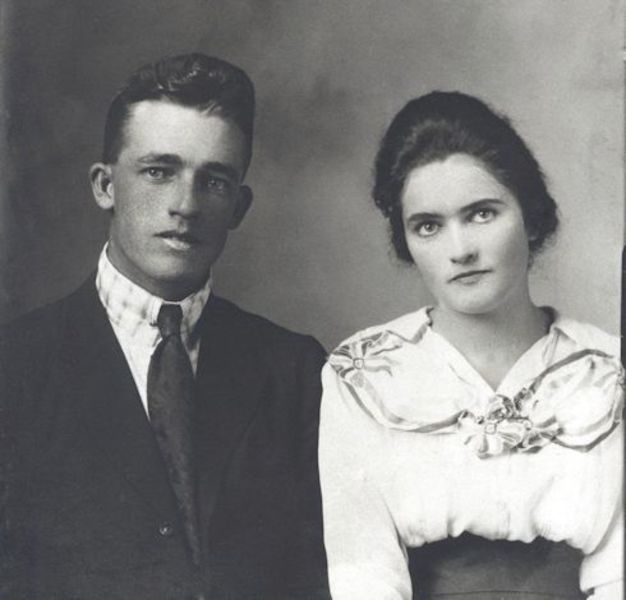 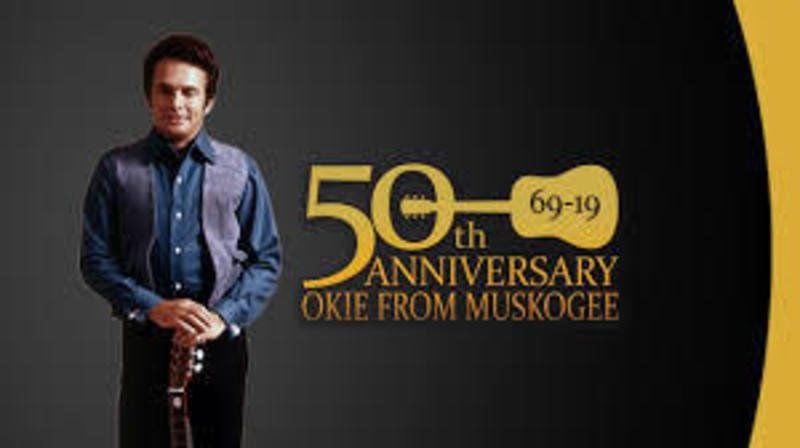 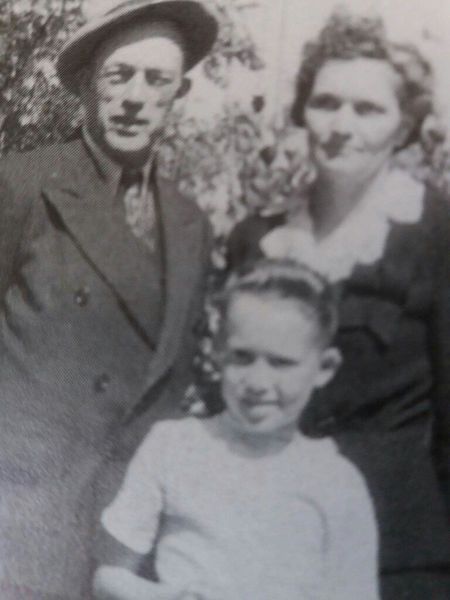 Merle Haggard with his parents in California shortly before his father’s death in 1945.

Merle Haggard with his parents in California shortly before his father’s death in 1945.

When Merle Haggard spoke on the stage at the then new Muskogee Civic Center on October 10, 1969 — 50 years ago — he introduced his new song, “Okie From Muskogee” with these words:

“As some of you in the audience may or may not know I wasn’t actually born here in Muskogee. But my family on my mother’s side lived here for many years and I think most all of my dad’s folks were born between here and Checotah somewhere. You know Brush Hill or Nebo Mountain or somewhere over in there? I have heard them talk so much about it that when I finally began to tour on the road, we made a special trip to come through here and see where they use to live.”

Haggard’s parents were James Francis and Flossie Mae Harp Haggard. They were married in Checotah on Nov. 16, 1919. The family moved to California from their home in Checotah, Oklahoma, during the Depression, after their barn burned in 1934.

In 2003, Merle Haggard and his sister, Lillian Haggard Hoge, donated nearly 30 of their family’s belongings to the Smithsonian Institution Museum of American History during a ceremony in the museum wing that houses 40 square feet of Route 66 from Oklahoma as part of the floor. His parents and siblings made the trip from Checotah to Bakersfield, California, in 1935 with a small trailer hooked to a 1926 Chevrolet. Among their belongings was a kerosene lamp, a heavy metal trunk, a simple ceramic bowl and a German-made camera.

Like many fleeing hard times and blowing dust in the 1930s, the Haggards made their trek west on the fabled Route 66. Hoge was 14 years old when the family left Checotah. Among the items she donated to the Smithsonian Institution was a picture her mother, Flossie, taken of her on Route 66 in Arizona. According to a memoir written by Flossie Haggard, “We packed canned meats and fruit, also filled a 50-pound lard can with cured bacon, and loaded a two-wheel trailer with a bit of bedding, my faithful Singer sewing machine, and some pots and skillets and headed West. We left on a Monday in July and got to Bakersfield that Friday. Our first job was at a dairy milking cows. Then Jim got a job with the Santa Fe Railway, and the family moved into a refrigerator car, fixing it up as a home and later buying it.”

They settled with their two elder children, Lowell and Lillian, in an apartment in Bakersfield, while James started working for the Santa Fe Railroad. A woman who owned a boxcar placed in Oildale, a nearby town, asked Haggard’s father about the possibility of converting it into a house. He remodeled the boxcar, and soon after moved in, also purchasing the lot, where Merle Ronald Haggard was born on April 6, 1937.

In a 1976 interview, Haggard said he always feels at home in Oklahoma. “I’m part Cherokee Indian. My mama was pregnant with me when my folks left Checotah to move to California in the late 1930s. I may have been born in California, but I was bred in Oklahoma and I’m an Okie at heart.” (In actuality it appears the Haggards actually had left Checotah in 1935 and Merle was not born until 1937; this would have been an unusually long pregnancy!)

Governor Kevin Stitt declared Thursday Oct. 10, 2019 as “Okie From Muskogee” Day in Oklahoma as it was 50 years to the day that Merle Haggard and his band The Strangers came to Muskogee to put on a show. The song “Okie From Muskogee” written earlier in 1969 and just released in September of 69 was the final number of the October 10, 1969 Muskogee show which was recorded live and released in December of that year. The album soon topped the Billboard country albums chart and was honored by the Country Music Association and Association of Country Music as “Album of the Year.” By November 15 of that year, the single had reached No.1 on the Country charts and No.41 on the Billboard all genre chart. The CMA’s also honored Haggard with the Single of the Year for “Okie from Muskogee” as well as Top Male Vocalist.

Thursday evening an “Okie from Muskogee” 50th Anniversary Tribute Concert was held in the very building, 50 years to the date, where Merle himself performed the song that put Muskogee on the map. The concert featured Merle’s sons, Ben and Noel Haggard, along with Haggard’s widow Theresa.

Mainly regarded as a protest song, protesting the protesters, “Okie From Muskogee” has more of a story behind it. Yes, it was aimed at the people protesting the Vietnam war in the late 1960’s. Merle Haggard became very disheartened watching people protest against poor troops who were fighting for our freedom. Haggard said, “When I was in prison, I knew what it was like to have freedom taken away. Freedom is everything.”

Besides its status of being the inspiration for his biggest career hit, Muskogee, Oklahoma was very important to Merle Haggard and dear to his heart. Merle’s parents were from the area before moving to California. Merle never lived in Muskogee. He was born three years after the family moved out west. But he was fully aware that his father worked hard on the farm back in Oklahoma and was proud to be an Okie, explaining the line in the song. But the real story of the song coming about was when Haggard was on tour with his band. They saw a sign along the interstate that read, “Muskogee 19 miles.” One of the band members commented that the citizens of that little town probably didn’t smoke marijuana. It started out as a joke in the bus. A joke that lasted about three seconds. Merle and drummer Roy Burris fed off that line and in about 20 minutes the song was wrote.