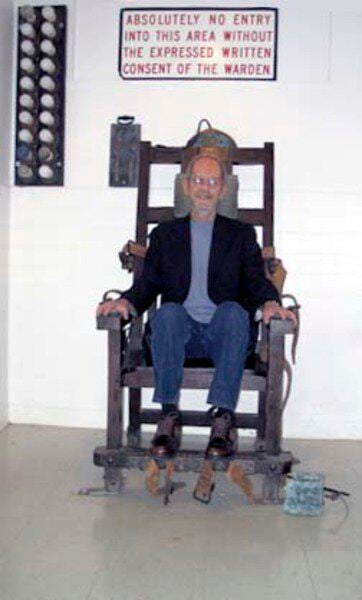 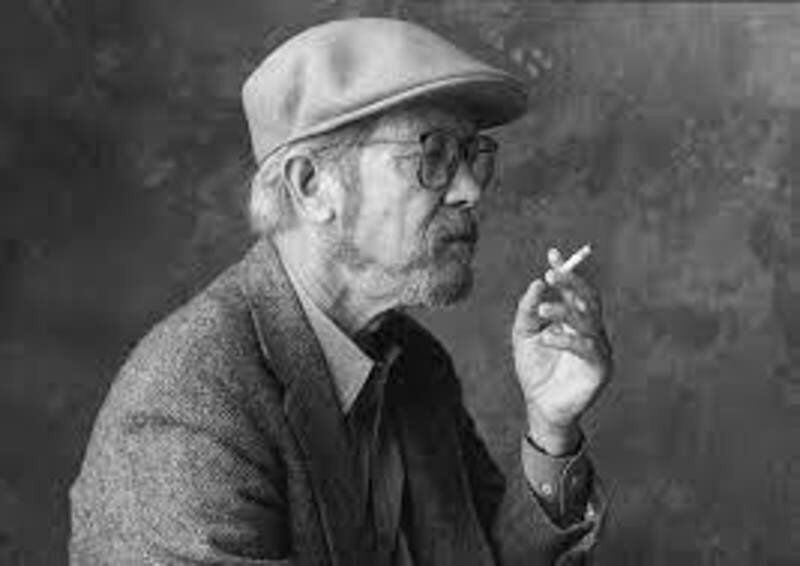 “There was a coal miner named Joe Tanzi from Krebs, who started digging coal when he was a kid, 13 years old but big for his age. On his 44th birthday, still going down in the mines, he told his wife he wasn't going to work anymore. He was going to hitch a ride to McAlester and rob the first bank he came to on Choctaw Avenue. Two weeks before this at Osage No. 5 an explosion sealed off Joe Tanzi for four days with four dead miners and five lunch pails. Joe didn't eat much, the smell of the dead miners made him sick. He decided he was through with mines.”

The above paragraph from “Comfort To The Enemy,” the title novella is the third in the Carl Webster series by the late author Elmore Leonard who brought his crime fighter Webster and other characters in “The Hot Kid,” “Up In Honey’s Room, and “Comfort To The Enemy” to the area. Leonard himself a one-time Oklahoman visited McAlester in 2005 and was photographed sitting in the electric chair at the then Oklahoma State Prison Museum.

When Elmore Leonard, (the Dickens of Detroit) died in 2013 at age 87, he left behind more than 40 novels, a number of short stories, and one ongoing television show, “Justified.” By most appraisals, he had long since dethroned Raymond Chandler as the greatest of American crime writers. Many critics argued that, if anything, the reference to genre slighted his contributions. Martin Amis described him as “a literary genius,” and “the nearest America has to a national writer.”

His earliest novels, published in the 1950s, were Westerns, but Leonard went on to specialize in crime fiction and suspense thrillers, many of which have been adapted into motion pictures. Among his best-known works are “Get Shorty,” “Out of Sight,” “Hombre,” “Mr. Majestyk”, and “Rum Punch: (adapted for the movie Jackie Brown). Leonard's writings include short stories that became the films “3:10 to Yuma” and “The Tall T,” as well as the FX television series “Justified.”

Elmore Leonard was born in New Orleans, Louisiana, October 11, 1925. His father worked as an executive for General Motors Corporation, and from 1927 to 1934, Leonard, his parents and older sister, Margaret, moved several times to Dallas, Oklahoma City and Memphis before finally settling in Detroit in 1934.

In the fifth grade, in 1935, Leonard showed the first sign of wanting to write fiction. He wrote a play inspired by the book, All Quiet on the Western Front, recently serialized in a Detroit newspaper; though it was the 1930 film version he recalls more vividly. He staged the play in the classroom, using desks as the barbed wire of no man’s land.

After graduating high school in Detroit, a stretch in the Navy Seabees in the South Pacific during World War II and a stint in the advertising business during college, he had his first novel, a Western called "The Bounty Hunters, published in 1953.

Leonard said he chose Oklahoma for the setting of his 40th novel “The Hot Kid,” (2005) with McAlester area characters and settings because "It's so American. Maybe that might be it just in a nutshell. You know, it's right in the middle of the country, and my mother would tell me that when she was a little girl in grade schools, they would list the states, and she would list about 45 states and then say Arizona and New Mexico Territory, and Indian Territory. And that was it. This "Indian Territory intrigued him.”

Leonard shared, “My longtime researcher Gregg Sutter spent more time researching than I did. Yeah, I went back. I went with him, and we were in Tulsa and drove down to McAlester and Sallisaw and the Cookson Hills, went through there. Drove all around to places in the book just to make sure.”

The result for all that roadwork is a spot-on depiction of Oklahoma in the 1920s and '30s, the setting for the story of Carl Webster, the son of an Okmulgee pecan farmer who grows up to become a sharpshooting, headline-grabbing deputy U.S. marshal, calm, cool and capable of outgunning any of the machine-gun toting bank robbers of the dusty Depression era.

His chief pursuit is Jack Belmont, the no-good son of a Tulsa oil millionaire who'd rather be Public Enemy No. 1 than a spoiled rich kid. It so happens Carl's pappy is also well off, having leased a piece of his pecan farm to the oil companies, with lucrative results. But, like Jack, Carl has his own ambitions namely to become the most famous and feared lawman in the Southwest.

McAlester is yet another location from “The Hot Kid”. Jack Belmont spends time at McAlester getting his criminal education. They never get him in ‘The Hot Seat’ for his crimes but Carl Webster is on his tail, so figure he’s already on Death Row.

When “The Hot Kid” was released, he insisted that the book launch be held in Oklahoma, where the story takes place.

Carl Webster returns to McAlester, and other locales in Oklahoma, in Leonard’s 2007 novel, “Up In Honey’s Room.” Sweet Honey Deal’s not sure what compelled her to marry Walter Schoen, possibly the most boring man on Earth. So, she quickly rectified the situation by leaving the dour German-born butcher to start a new life. A good thing, too, now that America’s at war with Adolf Hitler and Walter’s loyalty to his adopted country was always questionable. Even better, now U.S. Marshal Carl Webster wants to come up to Honey’s room for an official “chat” . . . and for something more intimate, if Honey has anything to say about it.

The feds’ legendary “Hot Kid,” Carl’s hunting two German POWs who escaped from an Oklahoma internment camp. Maybe Honey’s estranged hubby knows something. Maybe Honey knows something. Maybe Carl can stay faithful to his wife. Or maybe they’re all about to get tangled up—along with a sultry Ukrainian spy and her transvestite manservant—in a nutty assassination plot that can’t possibly succeed.

Finally, Leonard’s Webster and others return to southeast Oklahoma again in the 2009 novella, serialized in the New York Times Magazine, “Comfort To The Enemy.” This story traces Carl’s career from his run-in with 1930’s gangsters to his investigation of a murder at a German POW camp in Oklahoma. This time it’s Carl against war-seasoned Afrika Korps Nazis. With its pitch-perfect dialogue, compelling characters, and classic charm.

Some additional Elmore Leonard words from “Comfort To The Enemy wraps up where we started:

“His kids were grown by then. The boys had left Krebs for Tulsa and the oil fields, and the girls were married and keeping house. His wife locked the front door and went to her mother's.

That morning of his birthday Joe Tanzi had put on a clean shirt and pants with his worn-out suit coat, his cap, hitched the ride to McAlester and walked in the bank. He took out a pistol he'd bought for $6 off an old guy who was supposed to have been a Black Hand assassin in his time, and robbed the bank of $7,700 of miners' payroll.

What he did then, he got on the interurban streetcar and rode it 20 miles to Hartshorne, the end of the line, where he was arrested the next morning at the home of his oldest sister, Loretta, who was known as Grandma Tanzi and made a living brewing and selling Choc beer to coal miners. They asked Joe Tanzi, all right, where was the money? Joe Tanzi, one of those big guys who didn't talk much, said, "What money?"

They had bank people identify him and a hundred witnesses who saw him riding the streetcar with bank sacks. They asked him where he'd hid it. He wouldn't answer. They asked him using blackjacks on his kidneys till he was peeing blood and he still wouldn't tell them. For several days they searched his sister's house, her car, her property and adjoining lots. They brought dogs to the sister's house to sniff out in all directions. Once they gave up, knowing he'd never speak a word to them, they brought Joe Tanzi to federal court, charged him with bank robbery, found him guilty in five minutes and, mad as hell, sentenced him to 25 years of hard labor. This was in 1928.

In 1933 Joe Tanzi was one of six convicts in a work crew repaving Stonewall Avenue from McAlester's business district to the prison. He heard the signal as they were coming to the Barnett Memorial Church, a wolf whistle, and the six convicts took off in all directions. Joe Tanzi ran for the church hearing gunfire from the guards, but none of it coming at him. He got around back of the church and inside, the door unlocked, a man in there playing the organ, booming through part of a hymn when he heard the gunfire, went to a window to see what was going on. It allowed Joe Tanzi to get behind the organ in time to hear the guards coming, shouting, and heard the organist tell them nobody came in here, he'd have seen them. That night Joe Tanzi got pants and a shirt still damp off a clothesline, burned his prison stripes and walked two full nights to Hartshorne and dug up his bank money buried six feet deep in the middle of Grandma Tanzi's cornfield. The two thought they ought to move to Arkansas and that's what they did: paid $900 for a dinky farm near Mulberry, on the road east of Fort Smith.

"I guess they missed living in Oklahoma," Carl said to Gary Marion, "'cause now they have a farm near Idabel, close to the Red River. Cross it you're in Texas."